CS Graphics Under the Hood #1 – Biomes and Regions

One of the fundamental reorganizations done to Middle East 2.0 is the file system covering the Terrain and Vegetation graphics for the game, both with 2D and 3D. Changes include a common naming convention to files, where now say “Trees” file is named as such under both views, whether the boardgame view (2D), or the tabletop miniatures view (3D).

But, more importantly, also the whole manner how files are used was redesigned completely. Mapping the world one hex at a time,  as the slogan goes, there’s now a specific support for the Regions and Biomes of the World.

We’ll also have a look at Structures, containing the various buildings and built-up areas the game maps contain.

Before going any further, let us establish how the file system for graphics works. All files are located under these folders in game root:

For each view option, there’s a corresponding graphics tile set made available.

Here are the 2D (Boardgame view) zoom levels with their file name monikers:

OK, that done, let us get to Biomes and Regions, next!

“A biome is a community of plants and animals that have common characteristics for the environment they exist in.”, says Wiki:

Biomes available in Campaign Series, for an individual graphical representation each, are, with the filename prefix first, and explanation in parenthesis next:

With Middle East 2.0, the two Biomes available are Desert and Mediterranean.

But what about the buildings, at least? They differ from Biome to another as cultures are different. So imagine, for West Front, you’d want to depict the whole Mediterranean theatre of operations, and would like to have North African, Middle East and Italian peninsula with their individual look and feel?

The solution is to have Regional versions of each biome (Mediterranean, in this case). Regions supported at the moment are, again with filename prefix first:

So how to put them together, then? Here’s how the code covers them:

This can seem quite complex at first, so let us look at another sample.

Structure tiles, including individual buildings, villages, suburbs, and, cities are located in a fileset called Structures[view moniker].bmp. For instance, the 3D Zoom-in view file is called:

Mediterranean structures, if specifically made available (and they are), would be named as:

Italian buildings vs North African buildings, then, if made available (and currently they aren’t), here’s what they’d be called in turn:

Also, covering Italy for instance, if not buildings at least the vegetation between Southern and Northern (alpine) Italy varies. With Trees as an example, we’d have these two sets perhaps:

Note: lots of possibilities for individual graphics, almost too much even. The idea is to Keep It Simple however, therefore each individual files would be made available only when so preferred – by us as part of the stock game, or by any modder, at any time!

Having gotten this far, let us tackle our first graphics tiles set in the opening post. And since I’ve used Structures as an example, let us go with them.

Here’s how the files look, with background changed to white, 2D file on left, and 3D file on right: 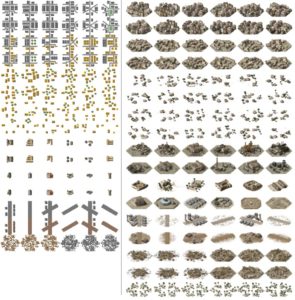 You’ll note there’s variations for certain tiles. Some of them are altered automatically, like City, Suburb and Village tiles, while others you’ll need to toggle with Map Editor, like Industrial and Special buildings or Airfield tiles.

In this post I’ve explained how the Regions and Biomes can be used to provide individual detail to a map, depending on its location, and also, what Structures file contains.

We’ve also covered how to interpret the file names for each zoom level, and where the 2D and 3D map graphics files are located.

In next post, I’ll explain the Terrain and Vegetation files in the game. Until then!