The Vietnam War in CS: Vietnam 1.0

On previous posts, we discussed the French Indochina War game content and then followed up with those covering the Vietnamese Civil War. With the game manual now available, let us do this one a bit differently. As the complete scenario listing is available in the manual, we will discuss a particular scenario per year, from 1965 to 1967.

And without further ado, let us move right into the Vietnam War part of the Campaign Series: Vietnam!

What better scenario to start this blog with than the operation that started it all: Operation STARLITE!

Here’s how the scenario description lays out the battle for Side A (US) of for Head-to-head play: 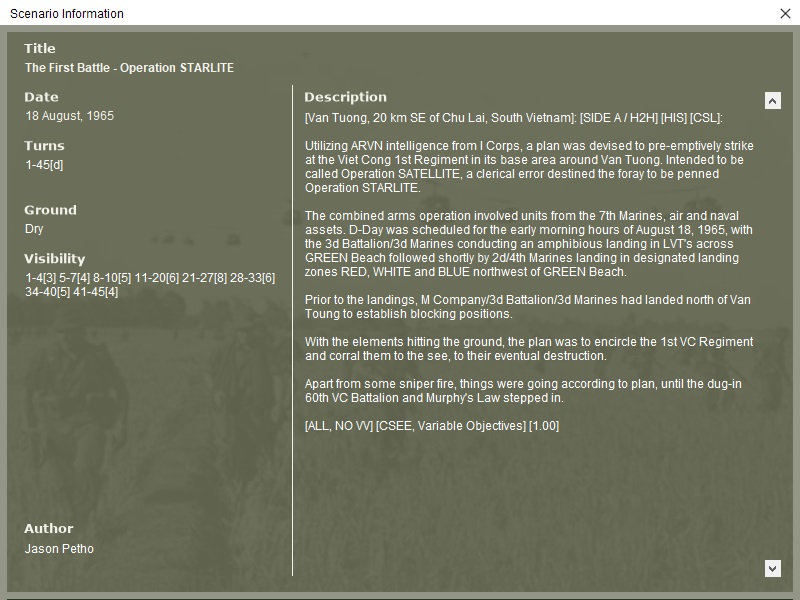 It is quite a battle, with one of the larger maps in the game. We strongly recommend to have everyone to complete the Bootcamp scenarios prior to play, in general, and this scenario, in particular. Amphibious landinds, Air lifts, Civilians, a very cunning enemy, they are all included here. 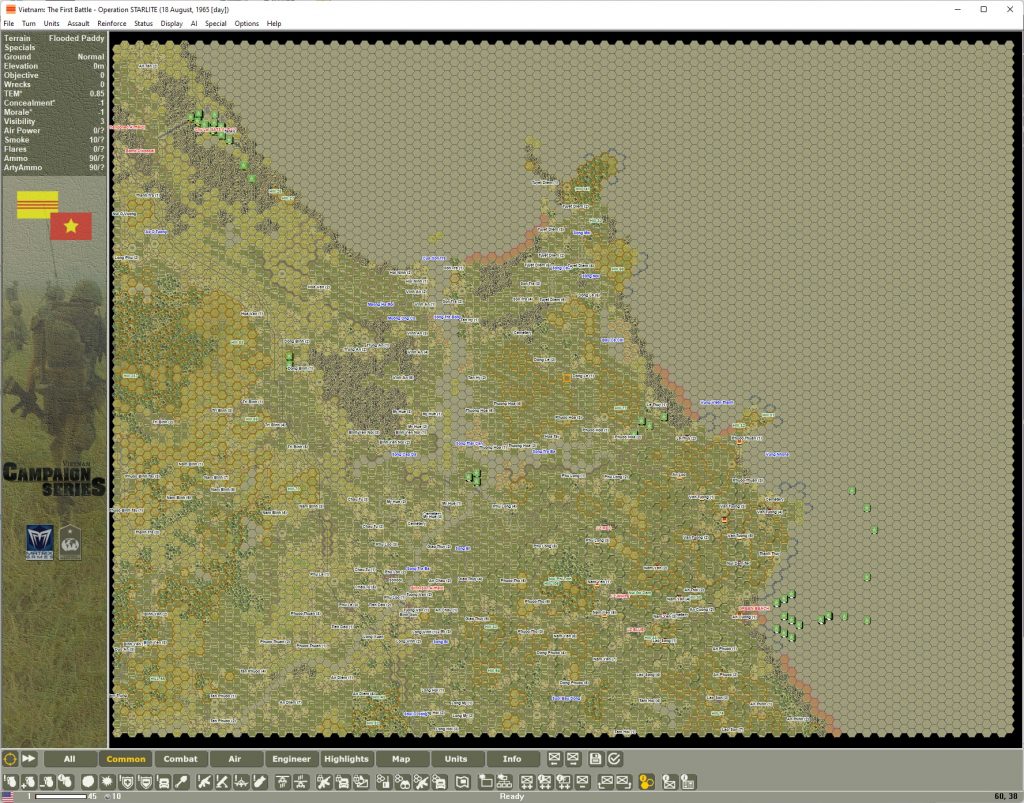 Here’s a detail of the Amphibious landings taking place in scenario. Note that we have turned the Map Hints ON to navigate the hexes. Reefs, for instance, you don’t want to get stuck at them while the enemy has a field day firing at you. 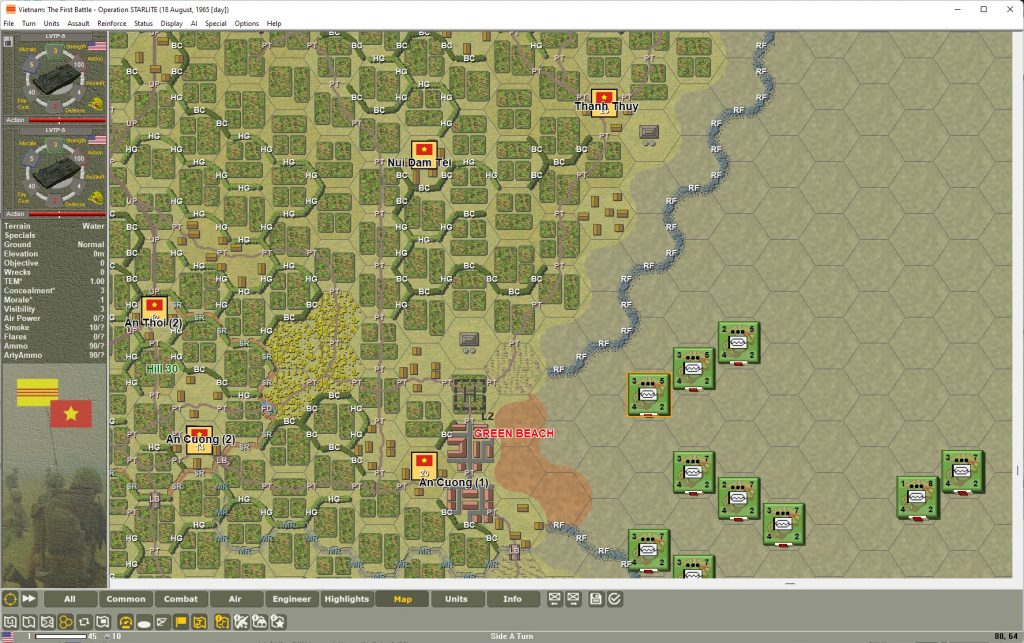 Operation STARLITE is also a popular topic on our Twitch channel, Jason Petho’s done already three mammoth live play sessions with this scenario, and there’s still plenty of fighting to be done. Recordings can be found at our:

There’s still more to come in future live-play sessions, do check out the Twitch Schedule page!

For something different, we chose the Battle of Long Tan to represent the year 1966 scenario content for this article. Made famous also by the recent Danger Close movie from 2019, this battle has a contingent of Australian forces (with some Kiwi artillery units as well!) for the Side A player to accomplish their mission.

Here’s how the Scenario Information portrays the situation. It is quite detailed, as these often are. Once you fire up the scenario, you are also presented with the side specific Scenario Briefing, with vital information for the battle itself. It often pays out to study that closely, too. While the Scenario Description lays out the historical details, it is the Briefing which can dictate the winner and the loser for each scenario included. 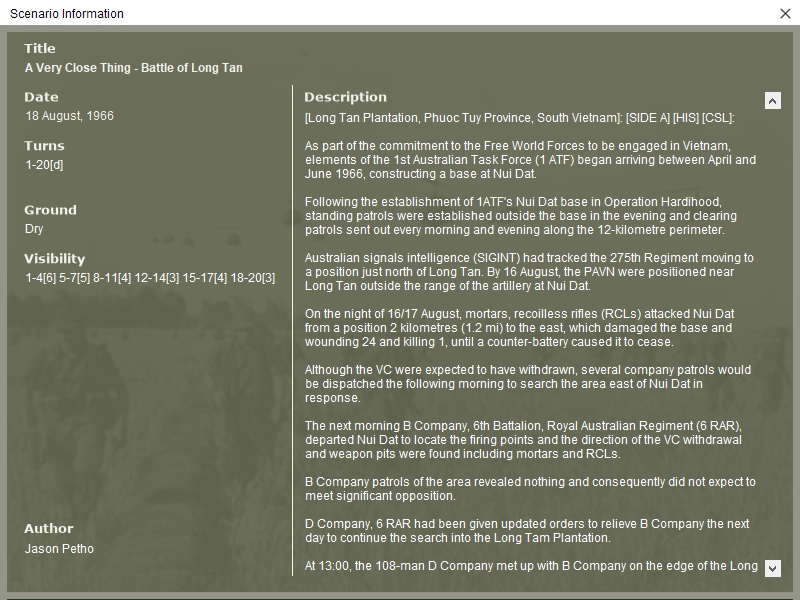 A Very Close Thing battle starts with the two Australian companies out there with their recon in force task, with a strong artillery park backing them up in the Nui Tai base. You’ll become quite familiar with the concept of Fire Bases with the VIetnam War part of the game, many of them of course not half this strong as this base here.

See the Kiwi Artillery Battery there, too? 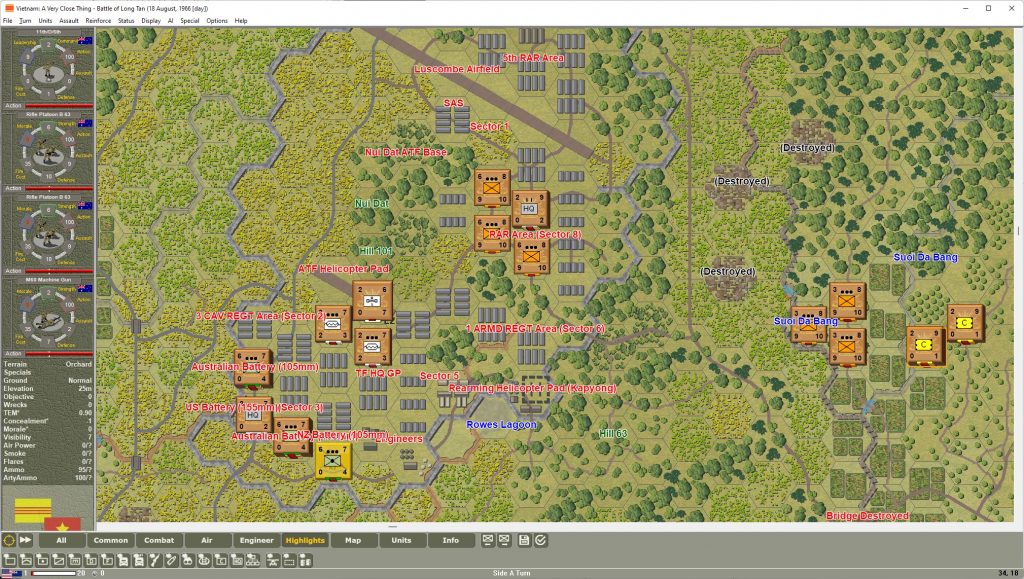 “A Very Close Thing” is about to hit the two Aussie companies at their face. So far it looks quite tranquite there though. And why not, with the concealment benefits the NVA units have. 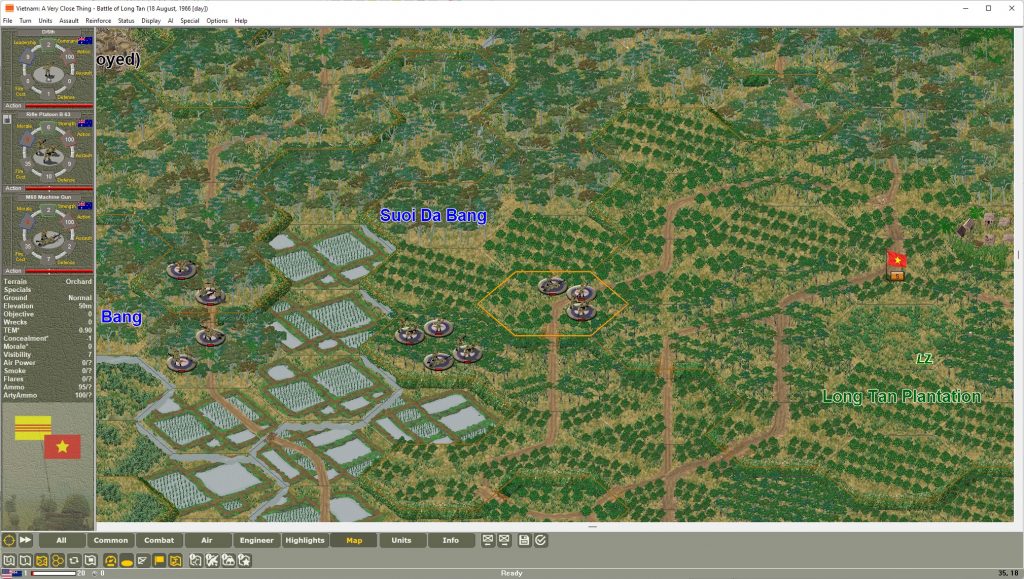 Similar to Operation STARLITE; A Very Close Thing was also the topic of one of the Twitch sessions Jason Petho did. There’s no recording however due to a technical glitch with Twitch. We strongly deny this has anything to do with the Computer-controlled NVA side having had quite a show of force in this play-through however!

Do give this scenario a try, too. A action-paced little scenario with a particularly clever AI opponent.

And with this, we will move to the final year of the battles covered in Campaign Series: Vietnam 1948-1967:

More known perhaps from the hard battles fought in 1968, this four-scenario set is a very fine prelude to that for you Khe Sanh fans out there. Here they are: 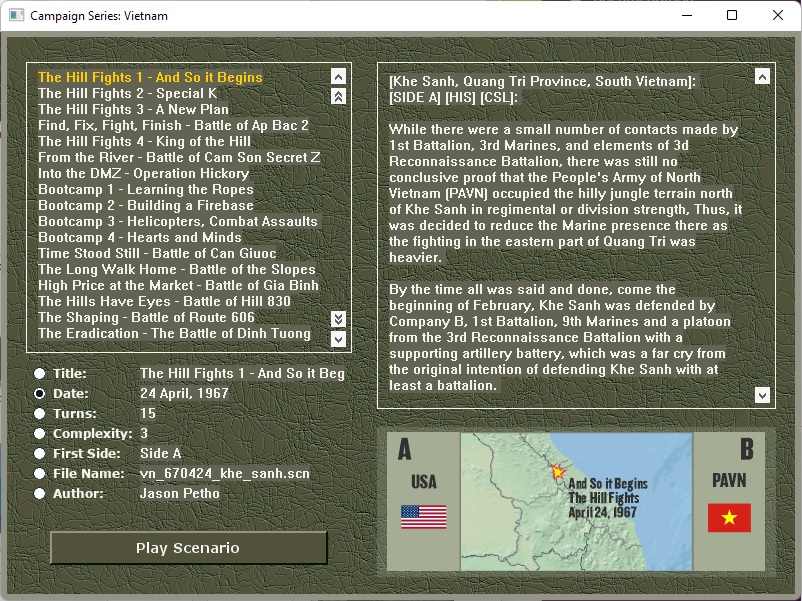 Again the game kicks off with quite a detailed Scenario Description. This is only the historical background, though, do remember to read your side specific Scenario Briefing for all those hints and tips as how to come out victorious from the scenario. 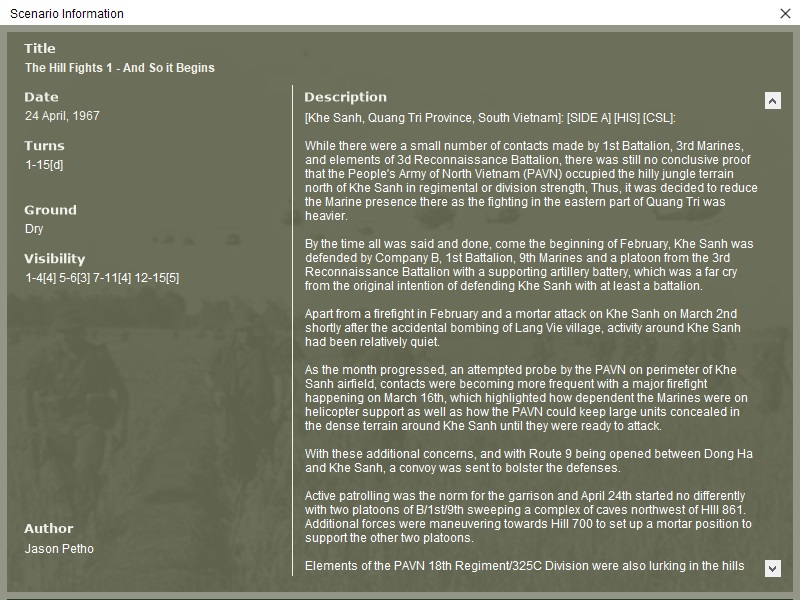 The Khe Sanh battles kick off with a rather large map, too. It is a big jungle out there, full of terror. 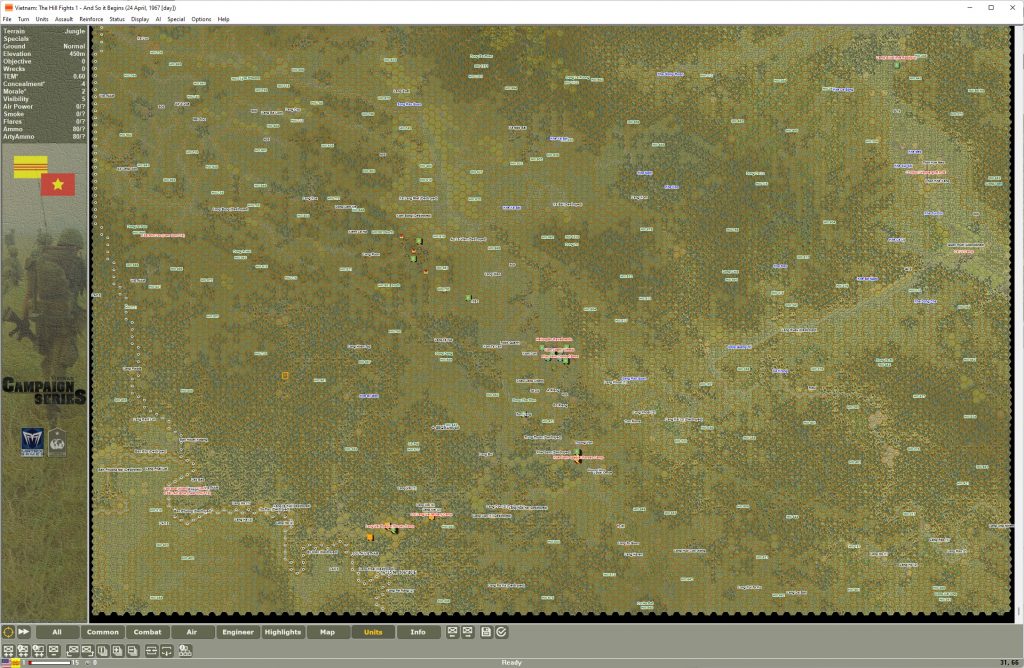 There’s a Fire Base here too, particularly versed for air lift operations with all the Helicopter pads there. Sometimes the units there are Fixed in place so as not to have an unhistorical chance to clear out the firebase of everything and to airlift them to where the action is. Sometimes, though, some formations are Fixed for a certain duration, or waiting for a certain Event to take place, and then Released. Then, fully available to assist you where you see fit – and where you can transport them to. 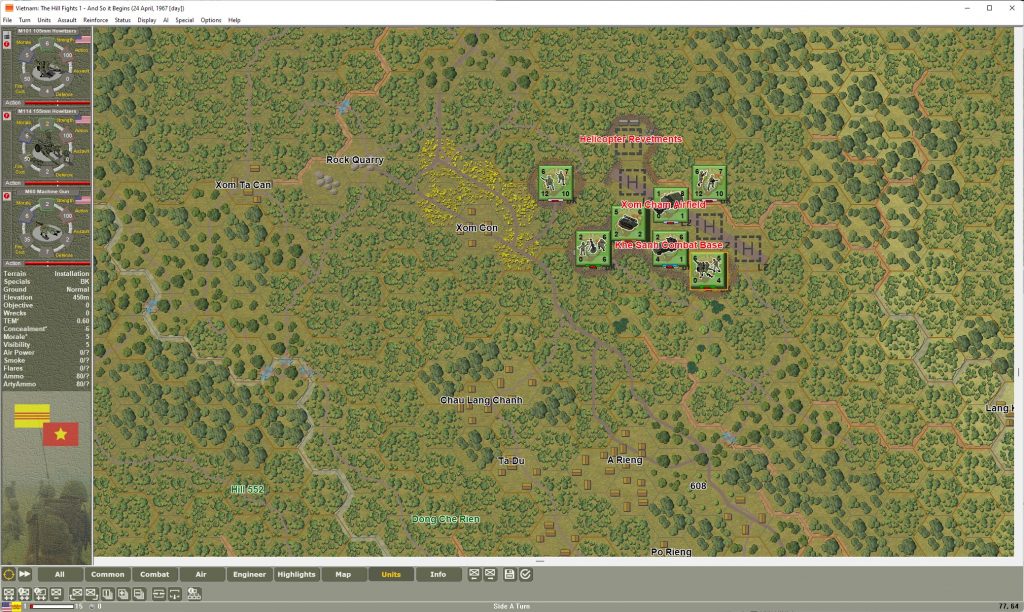 Despite of the size of the map, or the fact there’s four scenarios covering the hill fights, this one starts with some of the Marines already fully engaged with the enemy.

Note the Engineer you have there. Spot any Tunnel systems, better to destroy them, to prevent the NVA from infiltrating back to an area you just cleared. If you have Tunnel Rats with you, it often pays out to have them scout out the tunnels before thouth, there’s often NVA assets down there, supplies, what not.

Here’s a look at the map with Terrain Concealment Factors toggled ON. No NVA spotted anywhere? They are there, trust us. 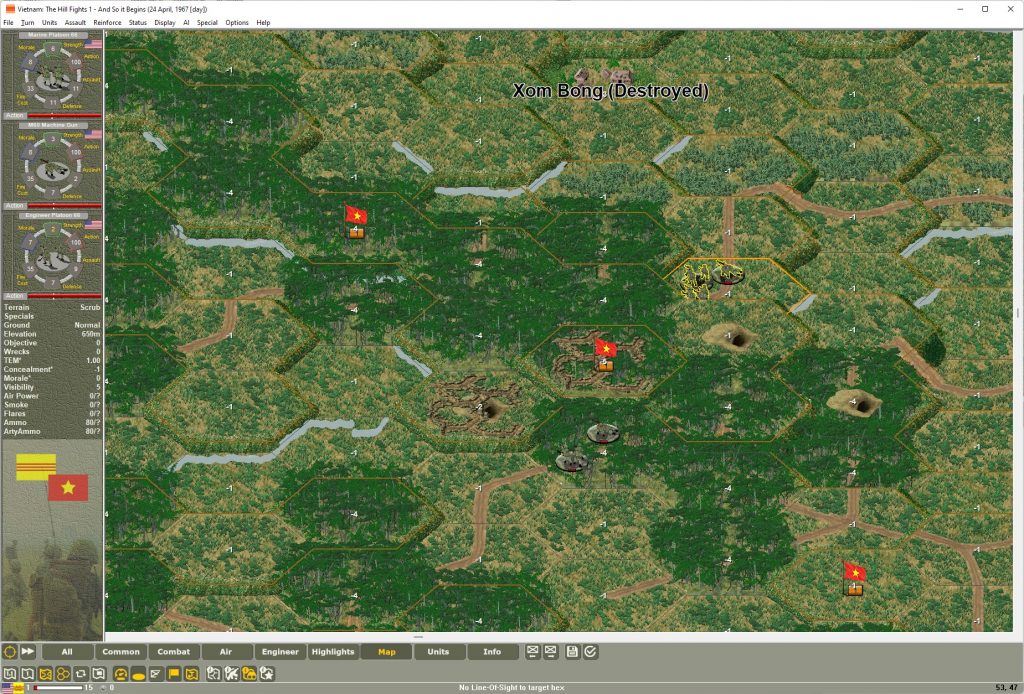 Campaign Series Vietnam 1967 And So It Begins – Khe Sanh

And with that, we conclude our pre-release blog series on scenario content available once the game releases.

Again, a reminder to download the game manual for a complete scenario listing in 9.0 Scenario Listing.

Not a long before the game finally releases. See you at the various gaming fora and social media channels!