I have just finished putting together a second iteration of the Finnish order of battle for Campaign Series: East Front III, a platoon-scale tactical wargame covering battles in WW2 Eastern Front in 1939-1941. This blog post supplements the previous German and Romanian OOB posts by Jason Petho, and Scott Cole, respectively.

As those familiar with history know, Finland participated in the Second World War battling the Soviet Union at two occasions, and then once against Nazi Germany pushing them out from the country. In this regard, Finland was placed in the unusual situation of being for, then against, then for, the overall interests of the Allied powers. 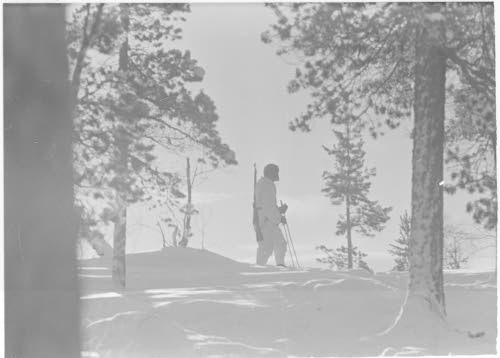 As East Front III 1.0 will cover the years 1939-1941, the relevant conflicts are the invasion of Finland by Soviet Union in 1939, known as Winter War, and the subsequent Finnish participation in Operation Barbarossa, dubbed Continuation War.

The war against Nazi Germany to liberate Finnish Lapland will be featured in an East Front III sequel covering the years 1944-45 and is not covered in this article.

The Winter War began with a Soviet invasion of Finland on 30 November 1939, three months after the outbreak of World War II, and ended three and a half months later with the Moscow Peace Treaty on 13 March 1940. This provides a relatively short period of time in regard of Order of Battle design, and will be implemented as a holistic, independent data set.

In addition to Finnish Army, the Swedish Volunteer Corps will be added as another independent formation to game’s data set under Finland nation ID 41.

Finnish Army will be covered in detail from Army Corps to Platoons, as there were no Army level formations in Winter War. There will be generic formations available under the standard TO&E information, with each and every historical division also represented in the data: 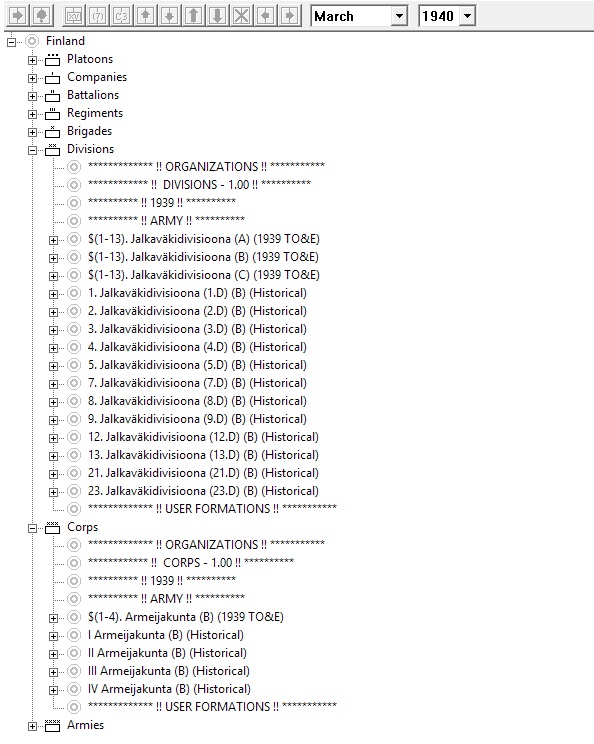 Being an artillery reservist myself, I took an additional effort to depict each and every historical artillery formation to the game as well, from Artillery Regiments to independent Batteries. As Winter War was a short but violent battle, each artillery formation will additionally be depicted as how they started the war, and how their strength was in February 1940, with one more month of war to go: 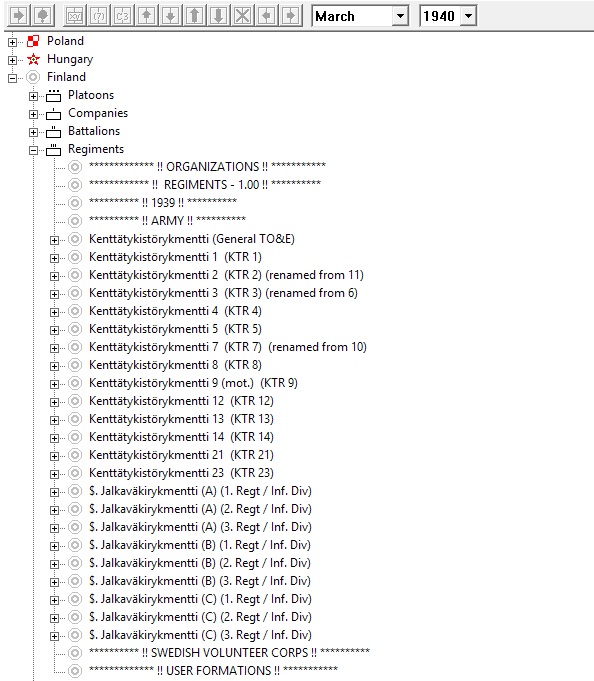 While most WW2 history geeks are aware that Sweden maintained their neutrality during the conflict, a less known fact perhaps is that during Winter War, Sweden simply declared themselves a “non co-belligerent” state instead. In other words, they did not maintain a strict neutrality as such.

Perhaps the concrete example of Sweden’s aid to Finland at this critical hour were the Swedish Volunteer Corps. Svenska frivillligkåren (in Swedish) were roughly a Brigade sized, well equipped formation, with some 9 650 Swedish volunteers choosing to join Winter War together with Finland. As part of the Corps, Sweden also sent approximately one third of their most moder airforce fleet (Gloster Gladiator fighters and Hawker Hart bombers) to Finland to accompany the volunteer pilots. 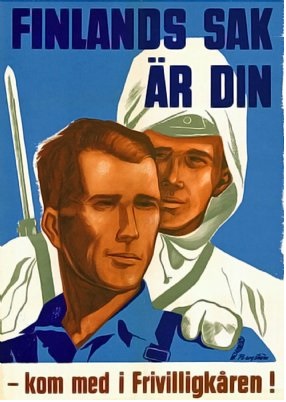 “Finland’s Cause is Yours – Come join the Volunteer Corps!”

Swedish Volunteer Corps played an important part occupying a wide front in Finnish Lapland, with the brave young volunteers willingly having risked their life for the sake of their Nordic neighbor. To honor their commitment, the Swedish Volunteer Corps are deservedly a part of the Winter War order of battle as an independent and full organization: 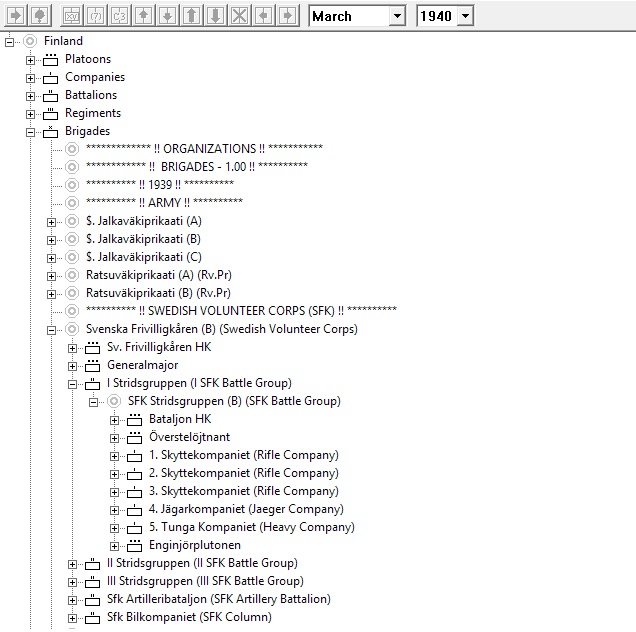 The Continuation War began some fifteen months after the end of the Winter War, with Finnish Army commencing their attack against Soviet Union in 10 July, 1941. The war would continue until September 1944, when Finland agreed to a cease-fire with USSR. For the purposes of East Front III 1.0, the initial Finnish Army formations will cover the year of 1941.

In addition to Finnish Army, no additional formations will be added to the data set, with Finnish Volunteer SS Battalion being a likely candidate for addition to a future East Front III sequel covering the years 1942-43. It is true parts of the Finnish volunteers fought already in 1941 in Waffen-SS division Wiking, but as they were integrated into the unit, instead of being an independent formation as the III/Nordland was (as of January 1942), they will not be depicted in the data sets for the first year of war.

Looking at the order of battle data, this time there will be a complete Finnish Army formation available from the Army level down to Platoons, again with generic TO&E based generic formations, and each and every division depicted in all their detail, too: 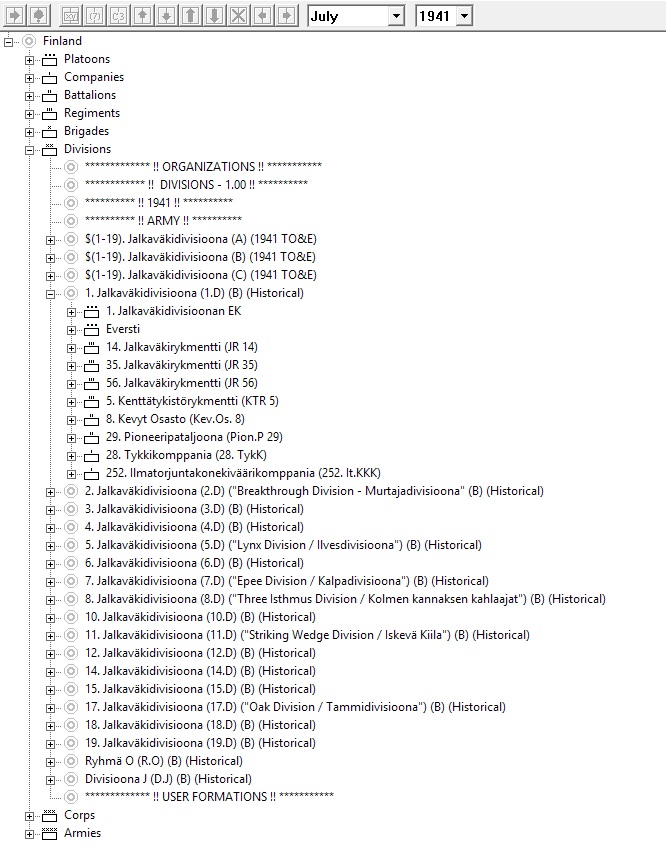 As with Winter War, all historical artillery formations are covered as well. With the hodgepodge set of various makes and models of artillery pieces, this was my favourite part of the OOB design, and I do hope you enjoy the historical details included in the game!

As a little something to look forward, all this detail in order of battle design will make it possible to add a plethora of nice little detail to the game.

Here’s the Finnish 3D unit bases with nine different designs available at the time of writing this article!

As Jason pointed out in his German OOB blog, Order of Battle creation is a labour of love with many challenges part of the job.

I do concur with him that, with addition of Winter War and Continuation War Finns (and Swedes!) to the game database, we’re making every effort to ensure that you will have the most accurate organizations to build your East Front scenarios, once the game is out!