If you are curious about the strange looking symbols on Situation Maps, or other old Wehrmacht documents, this primer on German Tactical Symbols is for you. Knowing how to read these symbols is useful in researching unit organization diagrams, and maps.

A unique system for representing military units on maps and organizational charts  was employed by the German Army. These symbols represented the formation size for the various corps, divisions, regiments, and so forth, as well as the primary combat type, whether infantry, tank, or artillery, etc.

Headquarters symbols had two purposes. First, it indicated the size, function, and mobility of the unit. And, second, it represented the headquarters. For all headquarters units with separate KStN, symbols were placed to the right of the echelon’s symbol, as well as units directly assigned to the headquarters.

The symbols were mnemonic. Headquarters symbols reflected units’ pennants used on vehicles or the standards themselves. Anyone seeing these could immediately recognize the unit type.

The different functions and mobility additions were used to enhance the echelon’s symbol to indicate a specific purpose. Company-sized units and sub-units symbols were also modified similarly.

In the early WWII period, symbols were defined by the official German handbook of military symbols (H.Dv. 272) of 1938. The KStN is an abbreviation for “Kriegstärkenachweisungen,” translated literally: “Combat Strength according to Directive.” Essentially, it is the table of organization and equipment for a unit.

Further, there were symbols that represented specific weapons, like mortars, machine guns, or artillery infantry guns. Here is a sample of these symbols:

Company-sized and smaller unit symbols tends to reflect the units’ function or at the main weapon.  Units too difficult to depict are represented by a box with corresponding abbreviations inside. In case it belonged to a particular arm, the arms symbol could be placed on top of or within this box. Where various modifiers applied, these were all added to the symbol.

An example is the Motorized Light Combat Engineer Company, KStN 714. It is represented:

This represents a company with three engineer platoons. The double arrow on top signifies engineering. The circles at the lower corners represent wheels, indicating this company is motorized.

Each of the three platoons have 9 light machine guns. The “le” at the bottom means that each platoon is light. Note the thickened line at the left. This is an indicator of a company structure.

Sometimes the box is divided by platoons or sections, but this could also be companies. It depends on the context. Usually a number is set below a weapon’s symbol, indicating the quantity in that unit. The ordinal numbering is from right to left, so that the platoon on the far right would normally be 1st Zug (Platoon) and then to the left, the 2nd and 3rd.

The tables of symbols are much greater than what is presented in this primer. But once you understand the system concept, using these additional references is easier.

On maps, like the German Situation Maps, headquater symbols are mostly used. However, the Wehrmacht also detailed their units according to composition with “Kriegsgleiderung” drawings.

Kriegs = war, and gleiderung = members. Or in other words, it was the membership or composition of a larger unit represented by a drawing called a “Kriegsgliderung.” Most divisions had their own specific Kriegsgliderung.

Such a representation is shown below for the 110. Schützen-Regiment (motorisiert) or 110th Motorized Infantry Regiment: 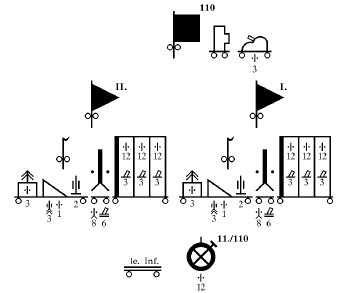 The Regiment Headquarters, KStN 103c has the signal platoon and armored car section. There were also trucks and motorcycles. (Shown at bottom.)

There are two battalions, I. and II. The Battalion Headquarters, KStN 115c has a signal detachment and some trucks and motorcycles.

The first Battalion has three motorized infantry companies, KStN 138c. Note that each company has twelve light machine guns and three 50mm mortars. These are represented by the box symbol.

To the left of the companies box there is a mixed machine gun company, KStN 161c with eight MG and six 81mm mortars. (There are two MG platoons, each with two sections of two guns each.)

This is the Kriegsgliederung for the 110. Motorized Infantry Regiment. 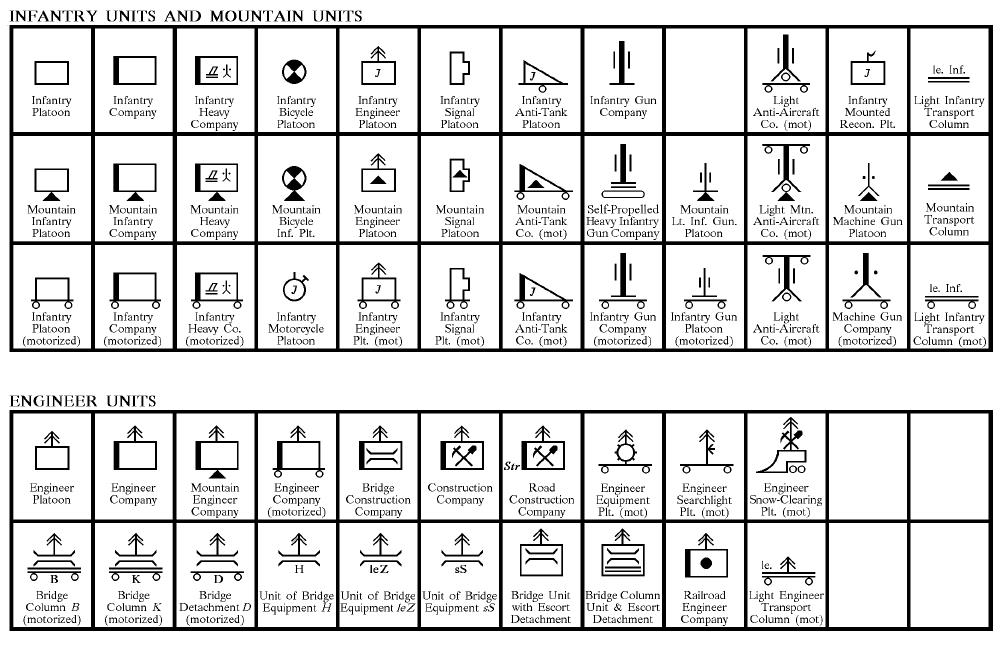 One of Stalin’s favorite generals, Budyonny, was associated with the cavalry forces. He was a highly successful commander in WWI and the Russian Civil War. However, during Operation Barbarossa, he commanded the Southwestern Front, which had disatrous encirclements, resulting in 1.5 million Red Army soldiers killed or taken prisoner. He was blamed for many of Stalin’s military strategic errors, but was retained in the Stavka command because of political connections and popularity.

Budyonny was born into a peasant family near the town of Salsk in the Don Cossack region, on  25 April, 1883. Although growing up in a Cossack region, Budyonny was not a Cossack. His parents came from Voronezh province, and were ethnic Russians. He worked as a farm labourer, shop errand boy, blacksmith’s apprentice, and steam-threshing driver.

In 1903, he was drafted into the Imperial Russian Army, where he became a cavalryman in the 46th Cossack Regiment. After fighting in the Russo-Japanese War, he attended the Academy for Cavalry Officers in St. Petersburg.

During World War I, Budyonny was the 5th Squadron’s non-commissioned troop officer in the Christian IX of Denmark 18th Seversky Dragoon Regiment, Caucasian Cavalry Division on the Western Front. He became famous for his attack on a German supply column near Brzezina, and was awarded the St. George Cross.

He received the St. George Cross, 3rd class, fighting the Turks near Mendelij. He won several other awards as a result of some of his exploits.

The 1st Cavalry Army played an important role in winning the Civil War for the Bolsheviks, driving the White General, Anton Denikin back from Moscow. Budyonny joined the Bolshevik party in 1919 and formed close relationships with Stalin and Voroshilov.

From 1921-1923, Budyonny was deputy commander of the North Caucasian Military District. He spent a great amount of time and effort in the organization and management of equestrian facilities and developing new breeds of horses.

The same year, he was also appointed assistant commander of the Red Army’s cavalry. In 1924, he became Inspector of Cavalry in the Red Army. Budyonny graduated from the Frunze Military Academy in 1932. In 1935, Budyonny was made one of the first five Marshals of the Soviet Union. Three of these five were executed in the Great Purge of the late 1930s, leaving only Budyonny and Voroshilov.

Budyonny was considered a courageous and colourful cavalry officer, but displayed disdain for the tools of modern warfare, particularly tanks, which he viewed as “incapable of ever replacing cavalry.”

During the Great Purge of 1937, the NKVD came to interrogate and arrest Budyonny. He was armed with a service Nagant M1895 revolver, and called Stalin to demand the agents leave him alone. Stalin complied and the event was not discussed again, and Budyonny survived the purge.

In July-September 1941, Budyonny was Commander-in-Chief of the Southwestern Front, facing the German invasion of Ukraine. Operating under strict orders from Stalin, (who micromanaged the war,) to not retreat under any circumstances. Budyonny’s forces were surrounded at Uman and the Battle of Kiev. The disasters which followed the encirclement cost the Soviet Union 1.5 million men killed or taken prisoner. This was one of the largest encirclements in military history.

Stalin replaced Budyonny with Semyon Timoshenko, and was then put in charge of the Reseve Front.

He held other posts during WWII, including Cavalry Inspector of the Red Army. One of his contributions was the development of the Cavalry-Mechanized group, which consisted of a cavalry corps reinforced with a mechanized corps. These were useful in the later war years.

In the post WWII era,  he became a renowned horse breeder, creating a breed that is still kept in large numbers in Russia, the Budyonny horse, which is famous for its high performance.

He was frequently commemorated for his bravery in many popular Soviet military songs, including The Red Cavalry song (Konarmieyskaya) and The Budyonny March. The stylized woolen hat, called the Budenovka, was part of the early Red Army uniform, and named after Budyonny. He was allowed to retire as a Hero of the Soviet Union, and provided a Dacha at Bakovka outside of Moscow. Finally, he died on 26 October 1973. 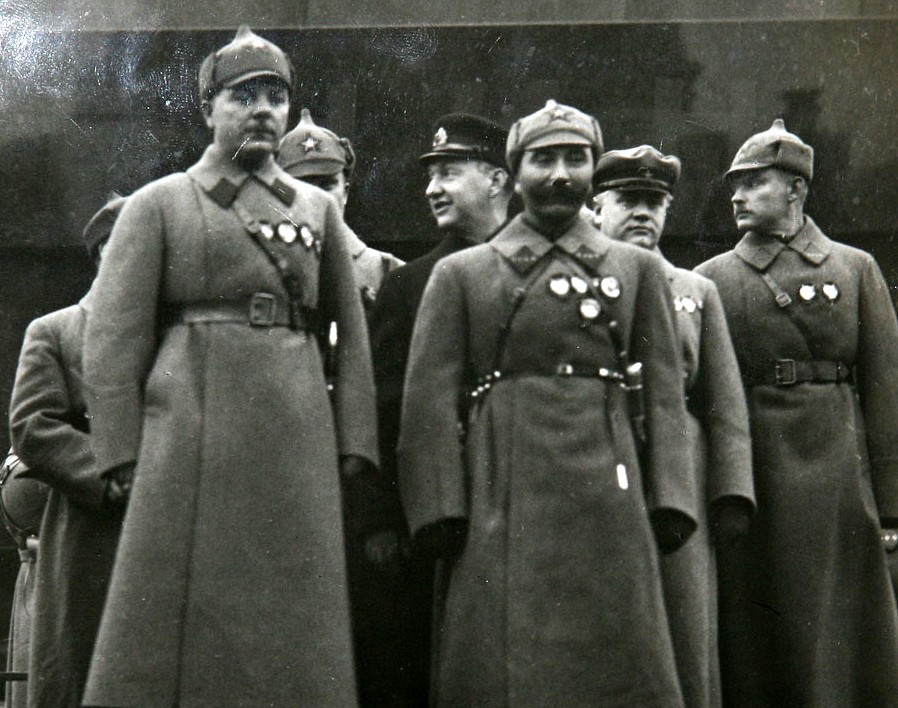 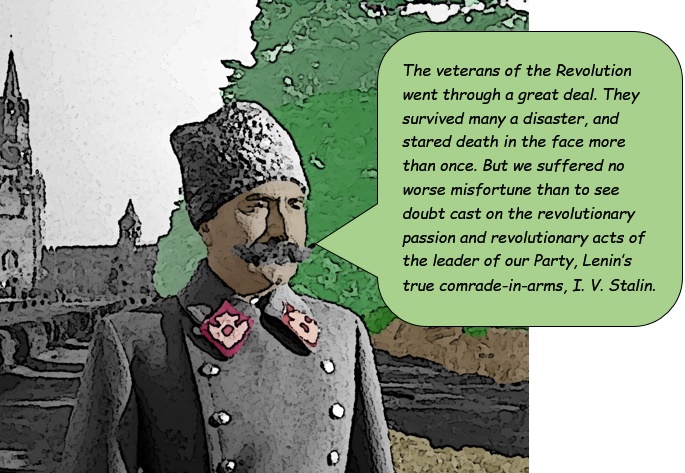