You might be pleased that the upcoming Campaign Series East Front III will feature scenarios of the German and Russian invasions of Poland. Naturally, finding suitable topographic maps to form game mapfiles is important, and this article describes some tips to finding suitable Polish reference maps.

After WWI, when Poland became an independent country, it faced a challenge of making maps after the invaders left behind nine triangulation systems. The Wojskowy Instytut Geograficzny (“Military Geographic Institute” or WIG) was set up in 1919 in Warsaw.

Maps in various scales of WWI powers such as Germany, Russia, and Austro-Hungary were updated and used for redrawn maps in the 1:100000 scale. (100k) These 482 sheets became the core set of maps. Each sheet covers 15′ (minutes) latitude, and 30′ longitude.

By 1926, they were 40% complete, and in 1927 began using a uniform triangulation network to print their own surveyed maps known as “Type Two.” These were two-colored, with black topographic elements and brown contour lines. From 1929 onward, the “Type Three” with either two or four colors were published. After 1931, four colors was the “Normal Type” for tactical maps.

By 1939, the  WIG had produced an additional 280 sheets of adjacent countries of USSR, Lithuania, Germany, Czechoslovakia, and Romania. In addition, the WIG made about 1600 1:25000 scale (25k) maps. These were arranged with nine 25k maps within the perimeter of one 100k map.

Elevation contours are shown in meters, but the intervals are based on the Russian “sazhen” with 1 sazhen = 2.134 meters. The contour intervals are in multiples of the sazhen, with the main “heavy lines” eight sazhens apart. (~17 meters) So, the “heavy” elevation contours with odd looking numbers like, 102, 119, or 137 may be seen. Some maps provide a contour legend table.

In September 1939, the WIG evacuated to Lwów, and via Romania to France, where it was reactivated. After the fall of France in 1940, it relocated to Great Britain where it made maps for the Polish Army in the west. The British GSGS (Geographical Section General Staff) produced their own set of WIG maps as series GSGS 4177. (220 copies) The GSGS also published WIG maps in the 1:300000 scale. 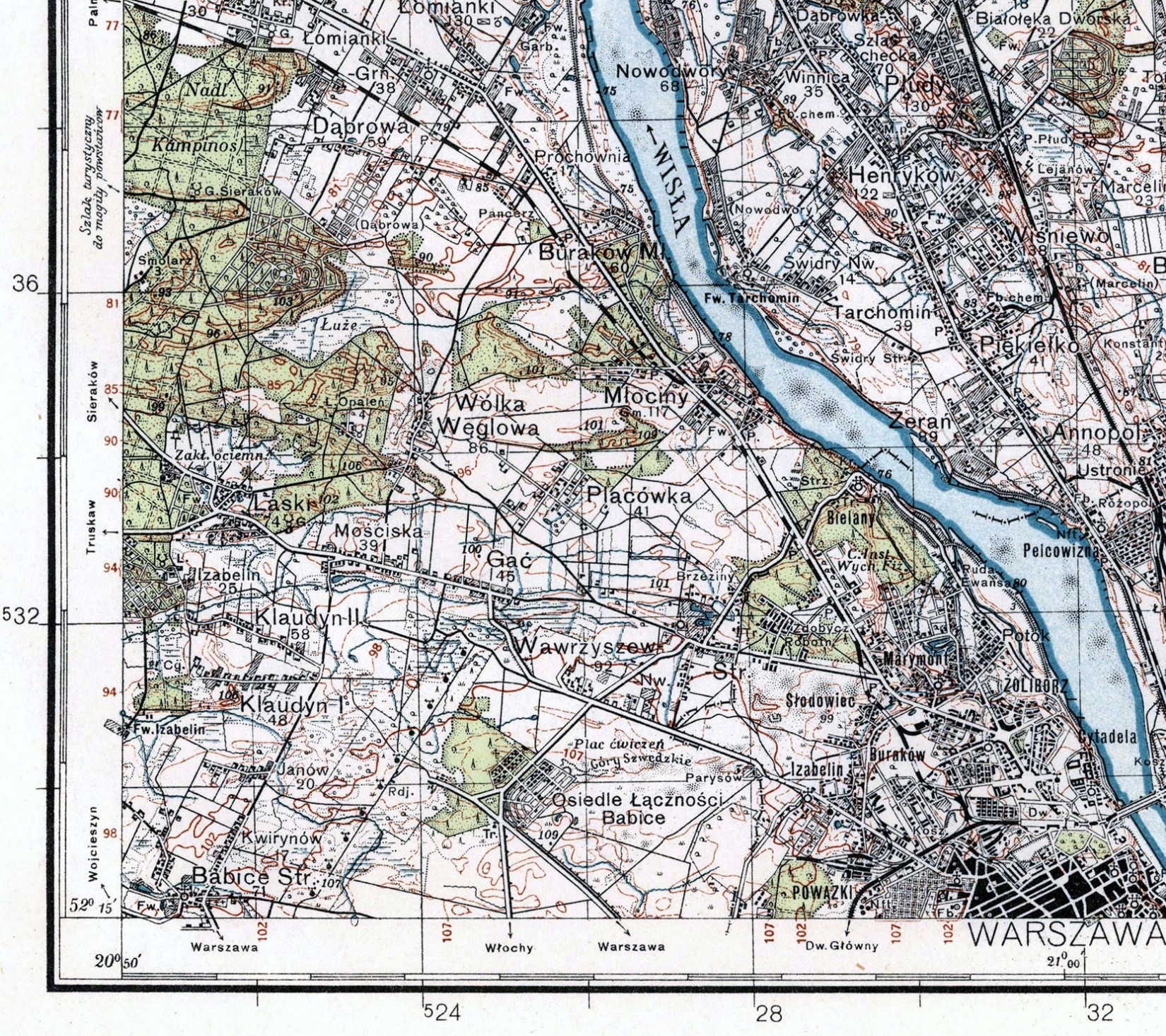 This service, known by the acronym AMS, was reorganized in 1941 under the US Army Corps of Engineers. They eventually published maps all around the world.  WIG maps were the basis for AMS  100k maps of Poland, produced from 1944 onwards. The AMS 851 series was a set of 25k Poland maps based on a combination of Polish, German, and Russian maps.

The AMS series M751, M752, and M753 are 1:50000 scale, 50k Poland maps, and were published starting in 1955. These are in the Transverse Mercator projection, using the International ellipsoid, and European Datum. They feature the UTM grid, zone 33. The contour lines are in 10 meter intervals, with supplementary ones at 5 meters. 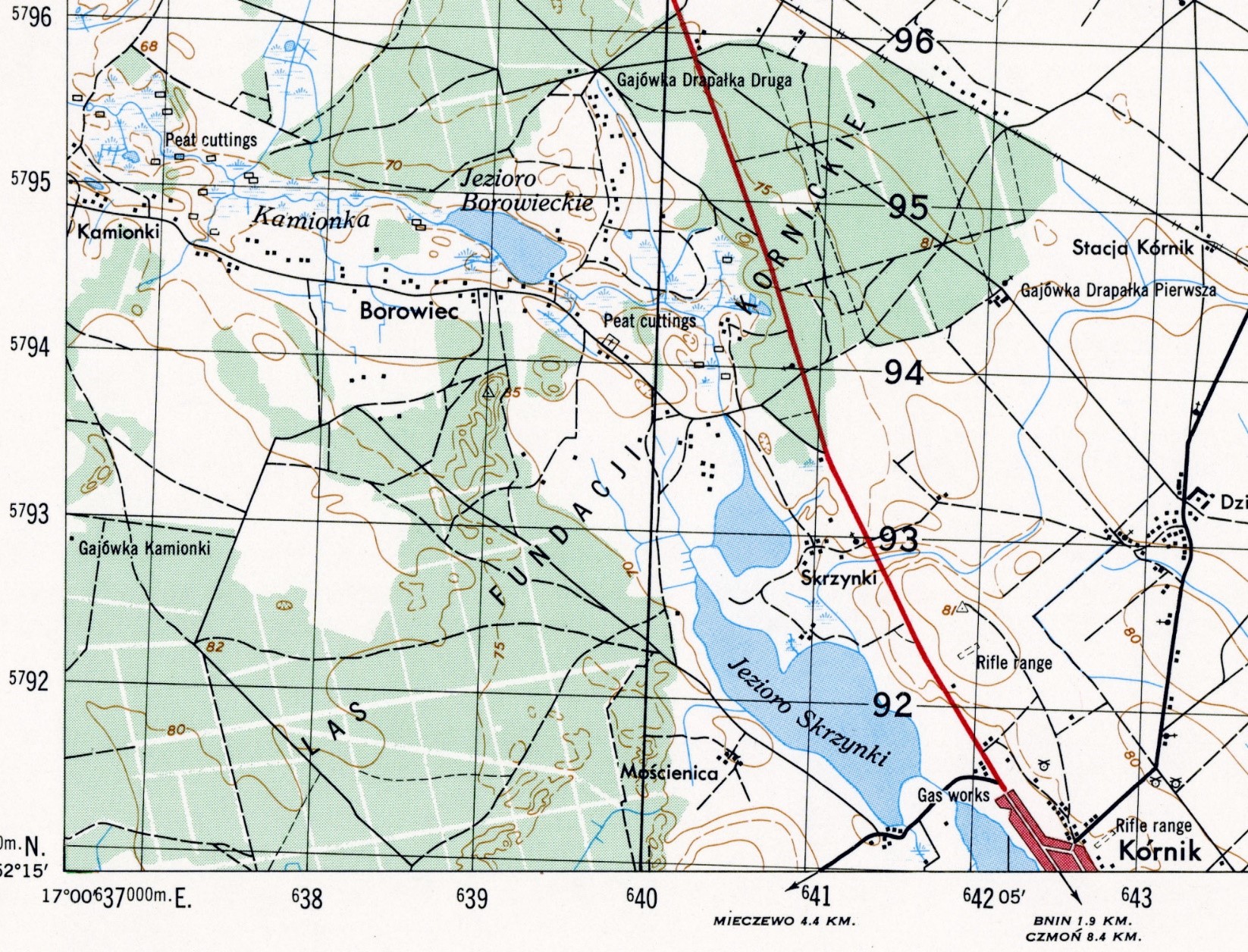 The WIG index map  for 100k and 25k shows a layout of rectangles that are 30′ longitude wide and 15′ latitude in height. Awkwardly, the reference longitude is 14°20′, and does not fall on degree whole number like 14°. But this can be overcome. The latitude reference is 48°.

Here is a portion of the WIG Index map, and will give an idea of how it is organized. In addition, each rectangle is subdivided into nine squares represented by letters A to I. 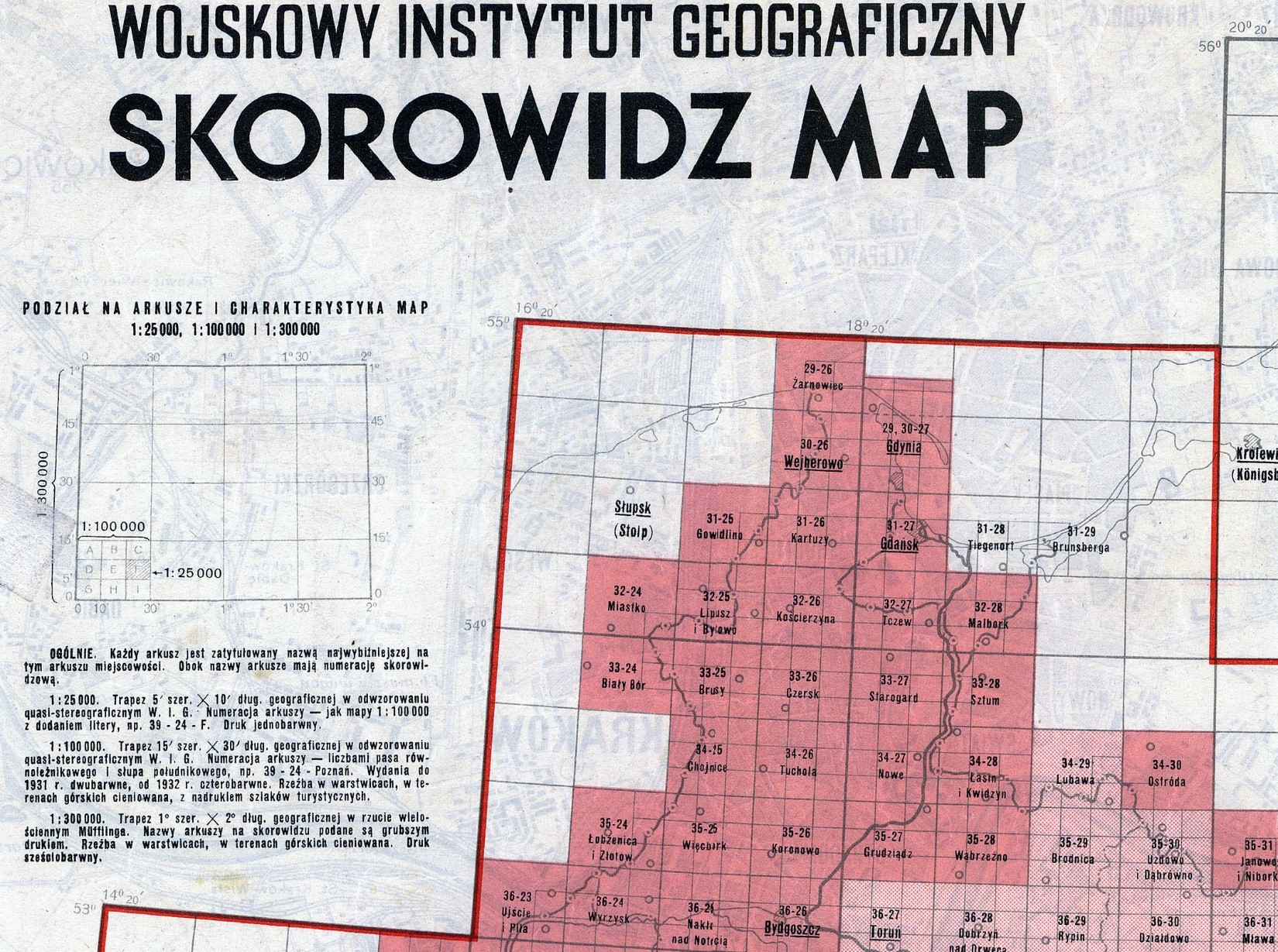 Now don’t worry my dear Vsadniks, there is an easier way to get the map numbers using a spreadsheet. That is, if you start with the geographic coordinates, latitude and longitude, of your point of interest. The spreadsheet takes the latitude and longitude, finds the northwest corner coordinates, and then looks up the index numbers, including the letter for the 25k map.

In addition, the spreadsheet has the links where you can download the maps on the Mapster website.

The yellow cells are inputs for the desired coordinates, and the blue cells are the index number and letter outputs. These are concatenated into a code which can be searched on the website.

The Polish index numbers have “P” and “S” prefixes before the index numbers. The “P” stands for “Pas,” which is Polish for “Zone,” and the “S” is for “Słup,” which means “Column.”

Here is a screenshot of the spreadsheet. This will be made available to you along with the WIG Index map here at the CS Legion site. 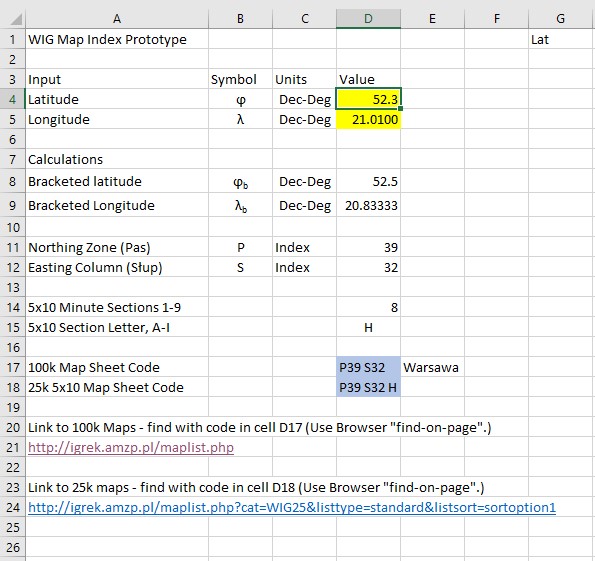 Screenshot of the WIG Index Spreadsheet

Similarly, a spreadsheet was made to find the 50k AMS maps of Poland. The AMS index map has reference latitude 48°, and longitude 14°. The 50k map sheets are 15′ in height and 20′ width. There is a larger four digit index number for a rectangle 30′ latitude by 40′ longitude. Finally, the 50k sheets are numbered I to IV, within the larger four digit index number. (First two for east-west direction, last two for north-south.)

Sorry for the confusion Vsadniks, but the following diagrams and the spreadsheet will hopefully make it clearer. The index numbers are increasing with both latitude and longitude, which makes it more straightforward.  The spreadsheet is set up similarly to the one for the WIG index. 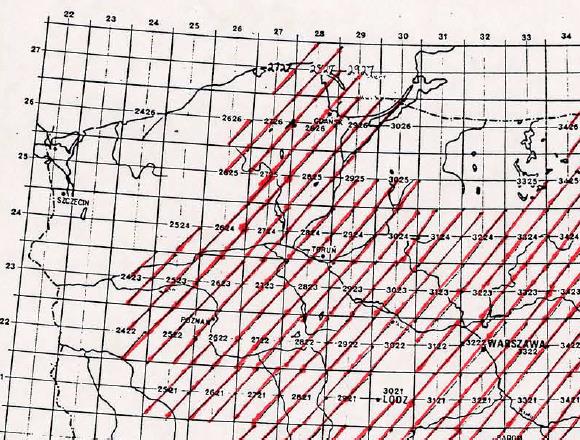 Screenshot section of the AMS Inde 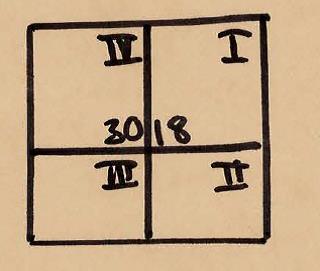 Layout of 50k Sheets within a larger four-digit area

There are definitely many suitable maps of Poland available to use in creating EFIII scenarios. In my opinion, the best overlay maps are the AMS 50k scale ones. The 50k scale has the appropriate detail level for the game 250-meter hexes. The contour lines, in 10-meter intervals are much easier to use for setting the game map elevations.

Since the AMS maps were published after WWII, they may show some roads and urban buildup that did not exist in 1939. Here is where the WIG maps are useful for more accurate interpretation of road categories, (Number of lanes and surface condition,) as well as size of towns and the scope of urban areas. 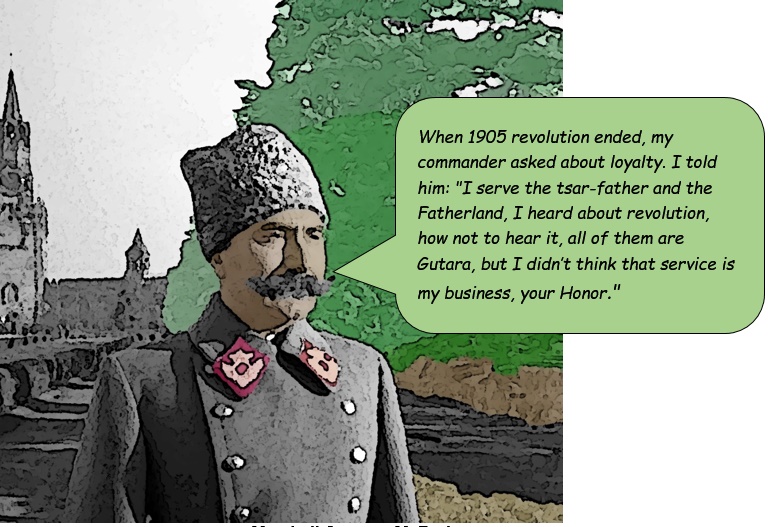