This series covers foreign intelligence networks working for the Soviet GRU in the early WWII era.

An overview of these, collectively known as “Rote Kapelle” is provided in this article.

What was the “Rote Kapelle”?

The term “Rote Kapelle” (“Red Orchestra,”) was a codename coined by German security, the Reichssicherheitshauptamt. (RSHA) It designated Soviet espionage networks in Western Europe. The intelligence reports were transmitted largely by radio. The “music” in the air had its “pianists” (radio operators,) field “maestros” like the Grand Chef and Sandor Rado, and its “conductor” in Moscow, the Director. The Director fed information into the GRU, the Main Intelligence Directorate (Russian: Гла́вное разве́дывательное управле́ние or Glavnoye razvedyvatel’noye upravleniye)

The analogy was not new, and was an accepted Abwehr term for secret wireless transmitters. The “Rote” or Red part was a reference to Communists. Originally, the term applied to the operation started by Abwehr’s III F group, also known as Ast 1 Belgien. This was a counterintelligence program that detected activity in Brussels, by the Funkabwehr. (W/T intercept and cryptoanalytic section)

The investigation soon extended into Holland, Germany, France, Switzerland, and Italy. The designation “Rote Kapelle” came to mean the collection of networks in these areas. These networks were not coordinating their efforts to much extent with each other. Their only common guidance was the Director in Moscow.

In July 1942, German investigation of Rote Kapelle was taken over from Ast 1 Belgien by Section IV. A.2. of the Sicherheitsdienst (SD, the security service of the RSHA). After the arrest of two leading Russian agents, Leopold Trepper and Victor Sukolov, a small independent Gestapo unit, “Sonderkommando Rote Kapelle,” was formed. “Sonderkommando” is the term used to designate a German counterespionage group.

Several Soviet agents in the networks became active years before World War II. Many survived the Stalin purges, and the difficult period of the non-aggression pact between Germany and the USSR. Rote Kapelle was not a wartime creation, but derived from Soviet prewar networks in Europe. Activities of Rote Kapelle were not limited to the countries mentioned. Several connections were found in England, Scandinavia, Eastern Europe, and the United States.

Most of the information was obtained from statements made by captured Soviet intelligence officers who belonged to Rote Kapelle. Some derives from observations made by German security agencies around 1941-1942. The leading Rote Kapelle officers independently gave corroborating testimony that Moscow began setting up networks in Europe as early as 1935 and 1936.

Specially trained and first-rate Red Army intelligence officers were employed. Some enrolled as students in European universities, while others applied for positions as technicians and merchants. Former Comintern agents were also encouraged to participate.

A memoir by Sandor Rado, “Under the Pseudonym Dora” also provides excellent detail.

Before World War II, Soviet intelligence targeted the United States and Western European countries, particularly England. In the beginning, they focused on establishing agent networks, installing radio and other communication facilities, and training.

Early in 1940, the main Rote Kapelle efforts were changed to Germany, despite the non-aggression pact. In the course of the war, it expanded to such a degree, it had become a principal component of Soviet Military intelligence. Its contributions were many, and it was a tremendous undertaking. It is one of the best examples of the intricate working methods of Soviet espionage. 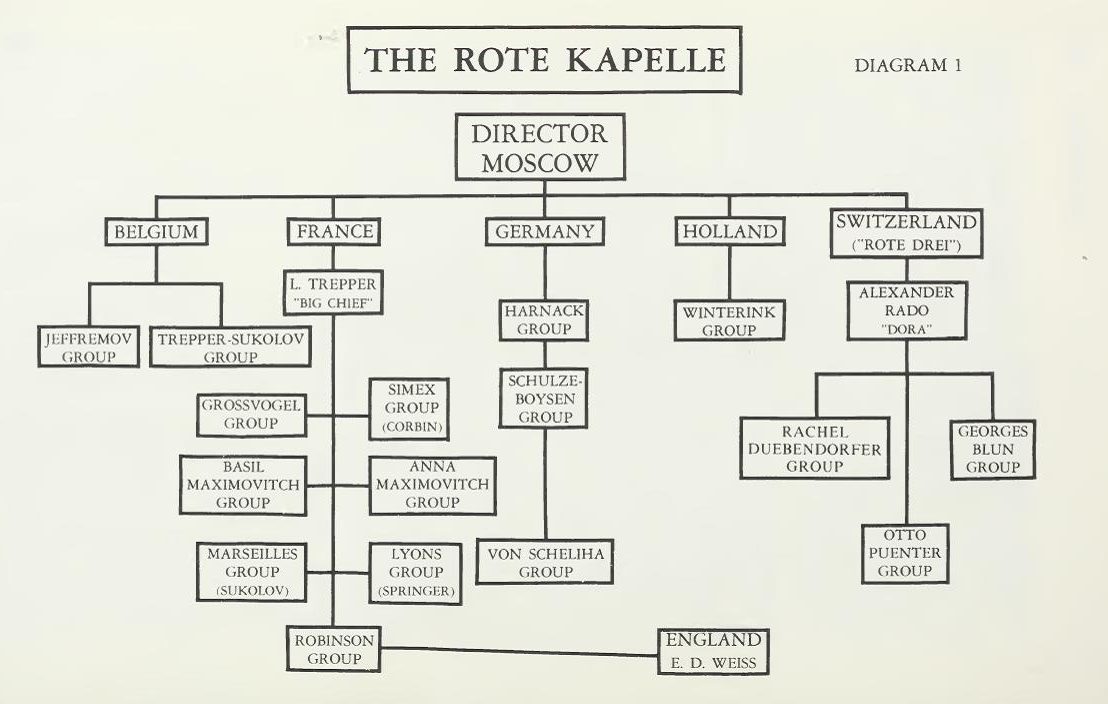 Sandor Rado was recruited into Soviet Intelligence, and requested residency in Switzerland. He set up the GeoPress Company, a map making agency, as a cover. Ultimately, he managed three spy sub-groups, Sisi, Pakbo, and Long. This organization was called the “Rote Drei” by the Germans.

The Rote Drei obtained intelligence of German intentions to invade Poland in 1939, and Russia in 1941. The ring operated three radio stations, two in Geneva and one in Lausanne. They had contacts with many sources, ultimately including some within the Wehrmacht high command.

Leopold Trepper set up the first network in Belgium along with an associate, Leon Grossvogel. The cover business was the Foreign Excellent Raincoat Company. Victor Sukolov was a GRU officer working with the group.

With the 1940 German invasion of Belgium, Trepper and Grossvogel fled to France and Sukolov took over the network and rebuilt it. This network was  known as the Trepper-Sukolov Group.

In 1942, after some members were arrested, Sukolov fled to France, and for several months, Konstantin Jeffremov ran remnants of the ring until they were compromised.

The Trepper-Sukolov Group had good courier connections with spies in Germany and France, and provided wireless transmissions for these networks. This is because wireless operations were under less scrutiny by Belgium authorities.

Paris was Leopold Trepper’s base from 1936 to 1938 while he engaged in planning and reorganization missions in France, Belgium, England, and Scandinavia. He moved to Brussels in spring 1939 heading the network there, but fled to France in July 1940 during the German invasion.

After Trepper returned to France, he renewed contact with Moscow via the Soviet Military Attache in Vichy. His assistants were Leon Grossvogel and Hillel Katz, as he knew both previously in Palestine. With their help, Trepper developed acquaintances with persons favorable to the Soviet Government, and recruited them as agents.

A new firm, SIMEX, was established in Paris through Grossvogel’s efforts. (The name was derived from S for Societe, IM for import, and EX for export. ) It was set up with funds salvaged from Belgium by Jules Jaspar, and was heavily subsidized by the Soviet Union.

There were seven sub-groups with agents gathering intelligence:   Andre,  Harry,  Professor,  Arztin   Simex,  Romeo,  and  Sierra. Only the Andre Group had wireless capability.  The Sierra Group was formed after Victor Sukolov fled Belgium in 1842. His alias at that time was Vincent Sierra.

In late 1938, Johannes Wenzel, W/T operator for Trepper Group in Belgium, visited Daniel Gouwlooze, a leading Dutch Communist. He asked for an assistant, and was sent a young Communist official, Anton Winterink. Wenzel trained Winterink on W/T. In September 1939, Winterink, alias Tino, was assigned as a W/T operatorfor for Jeffremov in Brussels.

Another candidate, Adam Nagel was also trained and qualified in W/T. Nagel, alias Velo, also worked for Jeffremov during most ot 1940. Late in 1940, Winterink was ordered to Amsterdam to form a Dutch group. In Amsterdam, Winterink set up a radio station and began transmitting to Moscow, under the callsign “Hilda.”

They continued to receive orders from Jeffremov. Maurice Peper (alias Wasserman) acted as the courier between Brussels and Amsterdam. Ultimately, the network included Wilhelm Voegeler, a W/T operator, Jakob Hilbolling, a courier and a safehouse keeper, Hendrika Smith, member of the Dutch Communist Party. The Winterink group provided information on German troop movements in Holland, and reports of political and economic interest. They were caught and arrested in fall 1942.

A far-reaching Soviet espionage network in Germany was comprised of groups led by Harro Schulze-Boysen, Arvid Harnack, and Rudolf von Scheliha. The separate groups were linked together, and also had occasional contacts with agents in other countries, particularly in Belgium and in France. Of these, the first two were so closely intermingled, essentially as a single network. The third group, that of von Scheliha, functioned independently.

The first two active agents were Rudolf von Scheliha and his accomplice, Ilse Stoebe. They were both recruited in Warsaw by the journalist Rudolf Herrnstadt, in 1937. The next in succession was Arvid Harnack, recruited in Berlin by Alexander Erdberg of the Soviet Trade Delegation in late 1940.

From early 1940 until August, and again in early 1942 until July, Stoebe made contact with the German career diplomat Rudolf von Scheliha. She received from him information of all kinds, which she passed to an attache in the Soviet Embassy.

Harro Schulze-Boysen was introduced by Harnack to Erdberg and recruited in early 1941. Schulze-Boysen’s activities began in 1936, while employed at the Air Ministry. He obtain secret plans for military operations to be directed against the Republican government in Spain. This was passed to the Russian Embassy in Berlin.

Hans Coppi was recruited by Schulze-Boysen in early 1941 as a wireless operator. Until his arrest, Harnack acted as an intermediary, and enciphered the messages sent to Moscow. The reports were brought to him by Schulze-Boysen, and Harnack passed them on to Hans Coppi for W/T transmission. Information included the details of truck repair works in Finland, reserve strength of the Luftwaffe, and troop movements down the Dnieper.

“The Rote Kapelle – The CIA’s History of Soviet Intelligence and Espionage Networks in Western Europe, 1936- 1945”, University Publications of America, Inc. 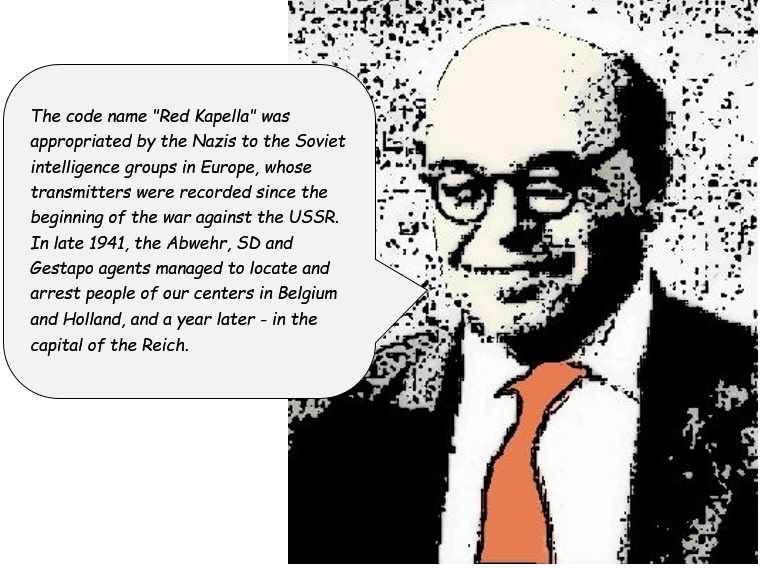