The Trepper-Sukolov Group operated in Belgium, and this article is an overview of their somewhat complex history.

The Soviets favored Belgium as a spy base because it was close to other countries, and had good commercial cover opportunities. Businessmen could travel freely on the continent, and to the British Isles without attracting attention. The authorities were somewhat indifferent to espionage, as long as it was not against Belgium. For these reasons, the GRU used the country widely in the 1930s as a training ground and base for its agents.

Spy networks had to be created, and the Soviet intelligence approach was for Moscow headquarters to send lists of spy candidates to the diplomatic representative. These contained the persons’ necessary background information. Strict care was observed to reject people who had been outspoken in public as Communist sympathizers. Their suitability and dependability was already established by the Director.

They were mobilized by an induction order designating a time and place for them to appear, along with detailed instructions for recognition signals, methods, and cover. Their intelligence officer contacts received similar orders. This system was practical for filling slots in networks with clocklike precision.

The Belgian networks of the Rote Kapelle were made up of: (1) Agents who had been working for the Comintern for many years, such as: Johannes Wenzel, (2) Soviet officers, such as: Leopold Trepper, and  (3) Agents recruited by Trepper, such as Herman Isbutsky.

The following table shows many that were active in the Trepper-Sukolov Group in the years from 1938 through the end of 1941. Trepper was the leader from December 1938 to July 1940. He fled to France when Germany invaded the Low Countries. His Deputy, Victor Sukolov stayed and rebuilt the network under the German occupation, until he was compromised, and forced to escape in late 1941.

A third network picked up the pieces and operated under Konstantin Jeffremov. It was marginally effective. In Summer 1942, it was detected and its members arrested and imprisoned. An organization table of the Trepper-Sukolov network follows. 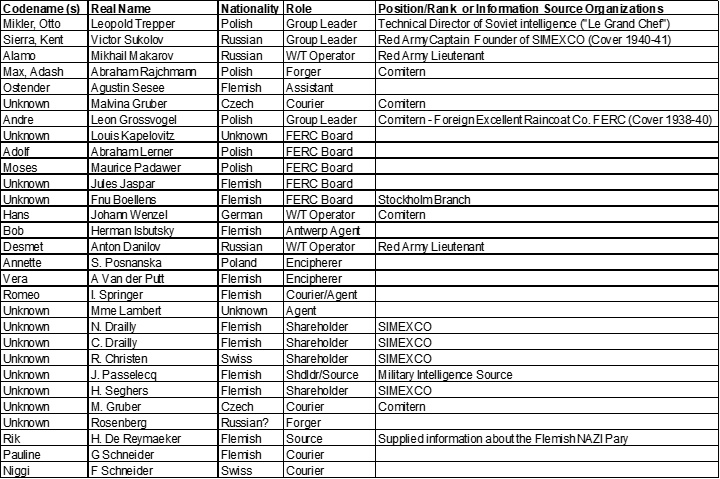 The first “cover” company for the network was the The Foreign Excellent Raincoat Company.

Trepper started this cover before the spy operation was launched. He believed that satisfactory spying could only be accomplished with a commercial cover. This could finance the espionage, and help avoid suspicion. Cover firms, or “shadow enterprises” had existed many years before in Europe, and were employed successfully during World War I.

Trepper turned to Leon Grossvogel, a former Comintern agent that had been employed by the Brussels firm, Roi du Caoutchouc, since 1929. In 1935, he managed the foreign subsidiary, the Excellent Raincoat Company. But, he was unpopular with his employers and in 1937, he became the firm’s traveling inspector.

Grossvogel proposed setting up an independent subsidiary company in the same business. His employers agreed and put up half the funds, and held half interest. Grossvogel owned half, and appointed Louis Kapelowitz, Abraham Lerner, Moses Padawer, and Jules Jaspar as Directors. The new company was the  Foreign Excellent Raincoat Company.

Germany seized The Foreign Excellent Raincoat Company when it invaded Belgium in 1940. And, with the departure of Trepper and Grossvogel to France, a new cover company was needed.  In March 1941, Viktor Sukolov set up and registered SIMEXCO in Brussels, with he and Nazarin Druilly as principal stockholders.

This was a “sister” firm to SIMEX, that was set up in France by Grossvogel. SIMEXCO was a genuine business and was granted telephone and telegraph facilities by the German authorities. The business was in general dealings and contracting supporting German occupation.

Sukolov set up a W/T operation, and established good communication with the new Trepper Group in France. Likely, many of Trepper’s intelligence messages to Moscow were sent through this W/T.

Sukolov fled from Brussels in December 1941 to France, and Nazarin Drailly took over the company management. The 1941 SIMEXCO profits were 1090000 Francs. Later, in July 1942, after the spy operation was detected by the German III N Ast, the firm was sold to Louis Thevenet, who was not not involved with espionage.

The Belgium operation’s main value was in wireless transmission to Moscow. They could operate transmitters without suspicion more easily than in other countries, like Germany, Switzerland, or France. Couriers could enter and leave Belgium more easily also.

In particular, Sukolov received reports from the German Harnack and Schulze-Boysen groups via courier, and to relayed from Belgium by wireless to Moscow. And, as stated earlier, Sukolov was handling W/T to Moscow for the Trepper Group in France in 1941.

Among the reports produced by the German groups and passed to Moscow by means of Sukolov ‘s transmitter in Brussels were the following: a. Information about the strength of the Luftwaffe at the outbreak of the Russo-German war. b. The monthly production figures of the German aircraft industry for June and July 1941. c. Advance information about the German attack on the Maikop oil fields. d.Figures on the losses of German parachutists in Crete.

The W/T operators were Johann Wenzel, Mikhail Makarov, and Anton Danilov. Wenzel’s W/T was in Brussels, and Makarov’s was in Ostende, but the facility was destroyed by German bombing in May, 1940, and he fled to Brussels and set up his own W/T there. Danilov was an assistant to Makarov.

Through his contacts with Bulgarian diplomatic circles, Trepper was able to tour the war-torn areas of Belgium in mid-May 1940, on the assumption that he was checking the damages to his business resources. He then wrote a lengthy report on his observations and discussions with people enroute, and forwarded it to Moscow.

“Andre” (Grossvogel), provided information concerning economy and industry, and “Romeo” (Isidor Springer) had contacts with US and Belgian diplomats. 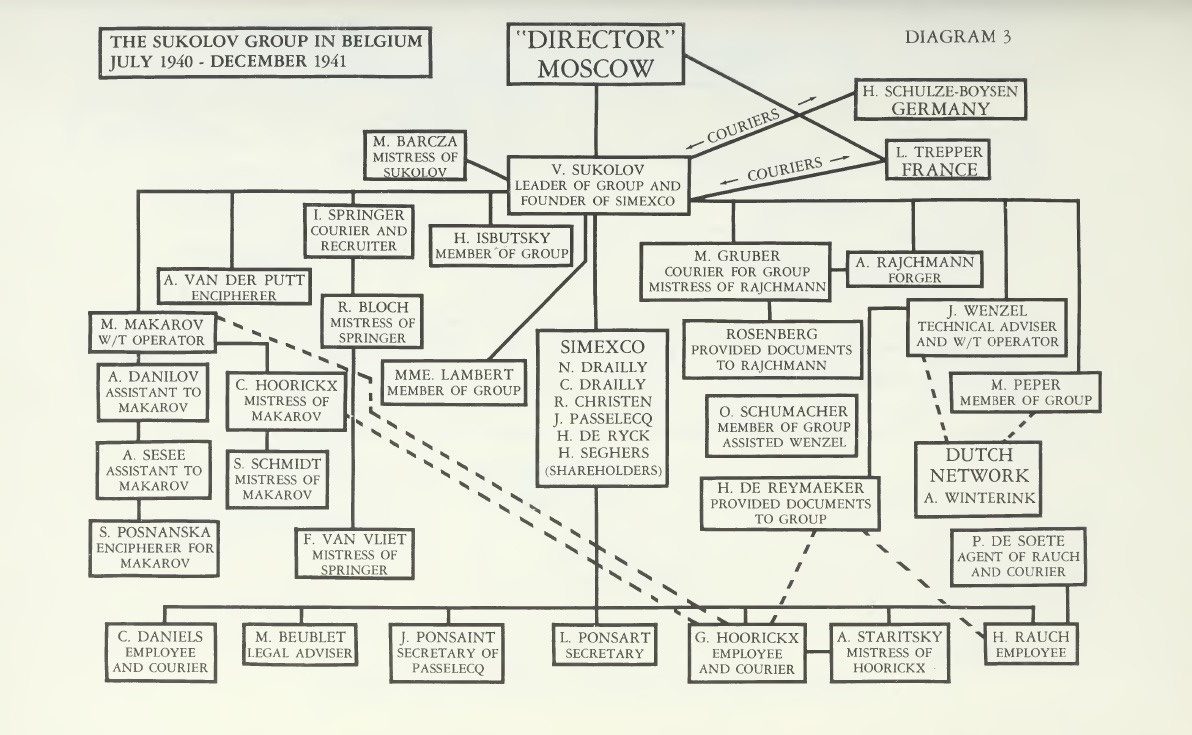 Victor Sukolov was born 7 November 1913 in St. Petersburg into a Jewish family, with name Anatoly Markovich Gurevich. He had many aliases, but the main ones were “Kent” and “Sierra.” In his teens, he was a factory worker and Komsomol member. He also had a gift for languages, and wanted to develop this for intelligence work.

Sukolov volunteered for the Spanish Civil War, hoping it would boost his career. He made the rank of Captain, and afterward was extensively trained  in espionage techniques by the GRU in Moscow. He learned about equipment, photography, and chemistry.

In 1938, he was posted to France. He visited Berlin in April 1939 to reactivate the Schulze-Boysen network, and initiate a courier service between Germany and Belgium. In July 1939, Sukolov entered Belgium as Uruguayan student at the University of Brussels. He used the cover name Vincent Sierra.

He delivered money and W/T technical information to Alexander Rado in Geneva in March 1940.  Sukolov worked as Trepper’s assistant in Brussels until Trepper fled to France in July 1940. At that time, Sukolov was placed in charge of the Belgian network. As head of SIMEXCO, he was able to travel freely, and in 1940 and 1941 he made trips to France, Germany, Switzerland, and Czechoslovakia on intelligence missions.

Members of the Belgium network were arrested in December 1941, and Sukolov escaped to France with his mistress Margarete Barcza. In January 1942 Sukolov reactivated a group of Czech agents in Marseilles, with cover of a branch of SIMEX, run by Jules Jaspar and Alfred Corbin.

He was arrested in Marseilles in November 1942. Ultimately, he was taken to Gestapo headquarters in Berlin for intensive interrogation. Agreeing to to cooperate, March 1943 Sukolov’s W/T playback to Moscow began. This continued until May 1945 from various locations.

The French captured him at Bludenz, Austria, 3 May 1945. He was turned over to the Soviet authorities, and ultimately imprisoned at Vorkonta. He was released in 1956, and afterward lived in St. Petersburg. He died in 2009. 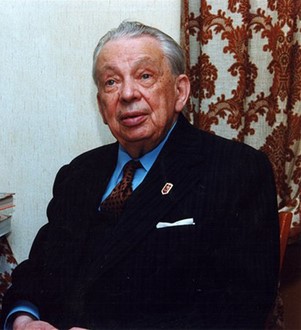 Couriers were used extensively by the networks. Most couriers were aware of their package contents but some were used as “dummies.” The network chief usually sent couriers to fixed rendezvous points in neighboring countries, to make contact with Moscow couriers.

The courier system was slower than other means of communication, but was more secure for bulky documents, microfilm, or equipment.

Many techniques camouflaged intelligence material appearance for secure delivery. Agents were told to never appear to be handing over anything unusual to the contact. They used everyday objects for concealment, such as fountain pens, cigarettes, pocket or wrist watches, or match boxes. Reports were hidden between newspaper pages, which were pasted together. They could be concealed in shoe soles, or underneath trunk labels.

“The Rote Kapelle – The CIA’s History of Soviet Intelligence and Espionage Networks in Western Europe, 1936-1945”, University Publications of America, Inc 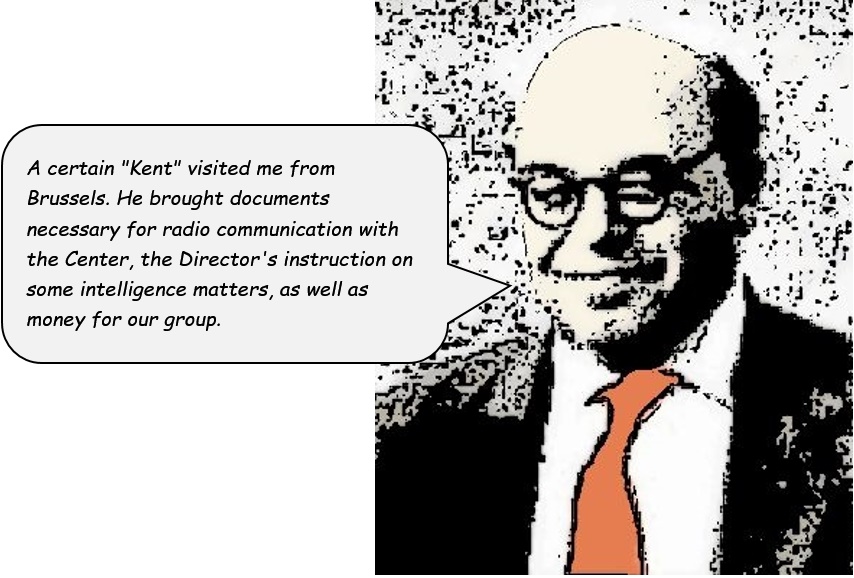