In 1938, Johannes Wenzel contacted Daniel Gouwlooze, and requested an agent from the Dutch Communist Party. Anton Winterink was sent to Belgium, where Wenzel trained him on wireless transmission. Winterink learned quickly, and in 1939, he assisted Wenzel in Brussels.

In June 1939, Wenzel asked Gouwlooze for another recruit, and Adam Nagel, a photographer, was sent. Nagel (alias Velo) and Winterink worked for Jeffremov in Brussels throughout most of 1940.

Late in 1940 Winterink, was ordered to return to Amsterdam to form a Dutch group. Winterink’s group, code name “Hilda,” continued to receive orders from Jeffremov, but established a communication connection to Moscow.

Anton Winterink (alias Tino) was born 5 November 1914 at Arnhem, Holland. He was a leading functionary of the Rote Hilfe organization in Holland, but in 1938, he gave up that job to devote full-time to intelligence work.

Winterink’s network included Nagel, Wilhelm Voegeler, a W/T operator, Jakob Hilbolling, a courier, and a safehouse keeper, Hendrika Smith, a member of the Dutch Communist Party. They provided Moscow with information on German troop movements in Holland, and reports of political and economic interest.

Daniel Gouwlooze was born 1901 in Amsterdam. He  was a Dutch Jew, and had originally been employed as a carpenter. In 1930 he became manager of Pegasus, which specialized in publishing Communist literature. Gouwlooze, aliases “DANN,”  “DAAN,” had been an active Communist since 1925, and in 1932, he became a member of the Executive Committee of the Dutch Communist Party. In 1934, he was arrested in connection with a plot to assassinate Queen Wilhelmina.

In 1936, Gouwlooze formed the “Dutch Information Service,” a group organized for the purpose of providing information to Moscow. Gouwlooze served as the link between this service and the Dutch Communist Party. Gouwlooze went to Moscow, where he was trained in intelligence.

Back in Amsterdam, Gouwlooze established a W/T service between Amsterdam and Moscow. His  W/T operators were August Johannes van Proosdy and Jan de Laar, both of whom had received technical training in Moscow. Jan Wilhelm Kruyt, parachuted into Holland in June 1942, with a W/T set. Although he was intended to set up a separate network, he ended up working for Gouwlooze.

Connected to Gouwlooze was Wilhelm Knochel, alias “Alfred.” He trained a group of German emigres in Holland. He sent them back to Germany to collect intelligence. Couriers would bring the information to Amsterdam, where it would transmitted by wireless to Moscow. Knochel’s couriers were Cilly Hansmann, and Charlotte Garske. But, there were problems with this communication.

In early 1942, Knochel, made his way to Berlin from Amsterdam, and established contact with his emigres. His connections indirectly extended to members of the Schulze-Boysen circle. Knöchel soon launched his own publication, Der Friedenskämpfer (“The Fighter for Peace,”) offering detailed accounts of German atrocities across the eastern front.

It is not known whether Knochel ever met John Sieg (Schulze-Boysen circle,) but Knochel and Sieg’s groups established contact, and exchanged micro-photocopies of materials through intermediaries Elisabeth Schumacher and Wilhelm Guddorf.

Other members of Knochel’s group were Erich Garske, Alfred Kowalke, Wilhelm Beuttel, Afons Kaps, and Willi Seng, aliases “August” and “Kurt.” Seng assisted with the Der Friedenskämpfer publication, with Garske as an illustrator.

Courier transfers from Germany to Holland were risky, and Knochel wanted to establish a separate W/T operation in Germany. Gouwlooze sent his W/T expert, van Proosdy to Germany to help.

Van Proosdy obtained a cover with the Quastenberg firm in Berlin, but was arrested by the Germans shortly after his arrival in Berlin. Knochel and other members of his group were arrested in early 1943 and later executed. 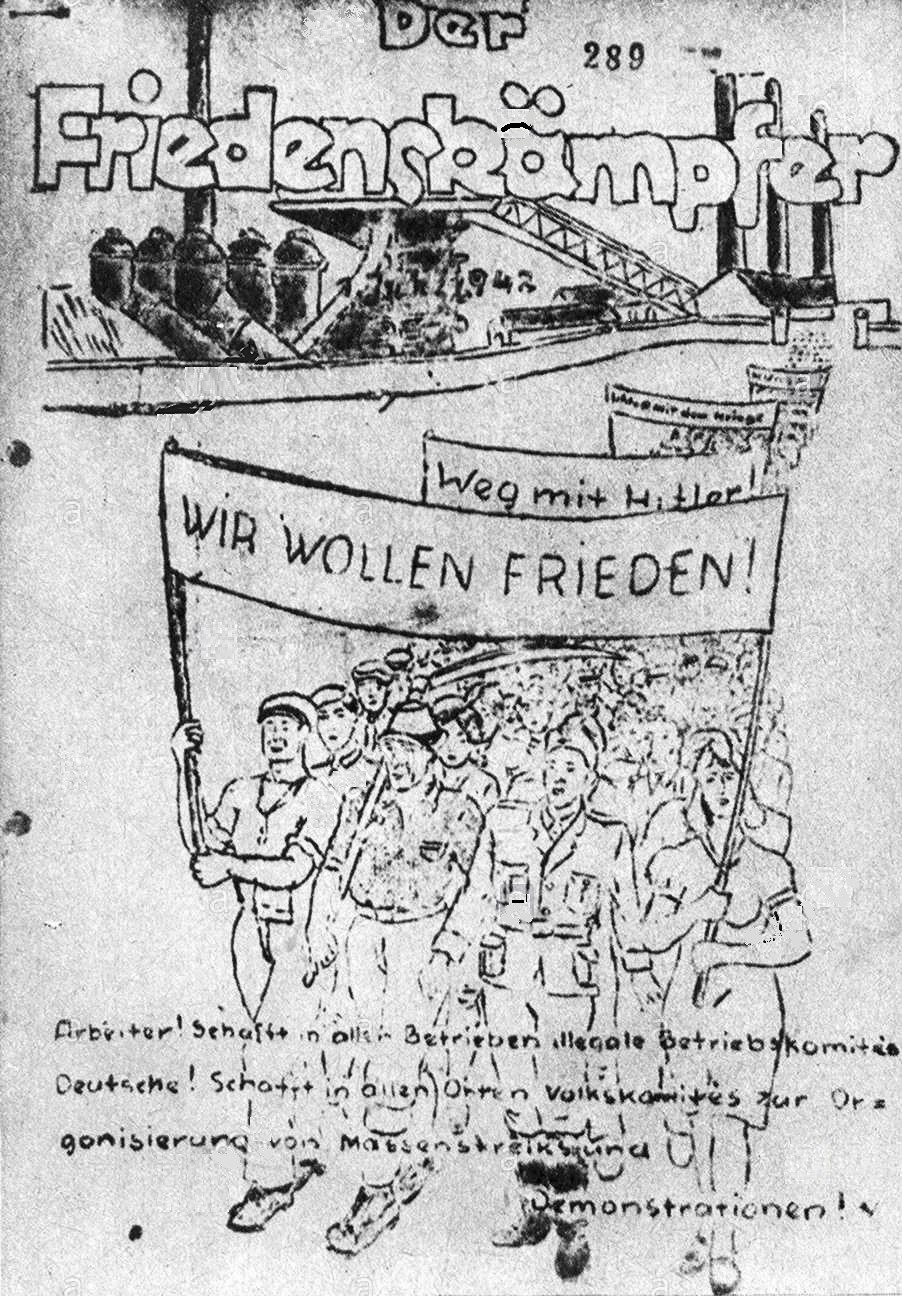 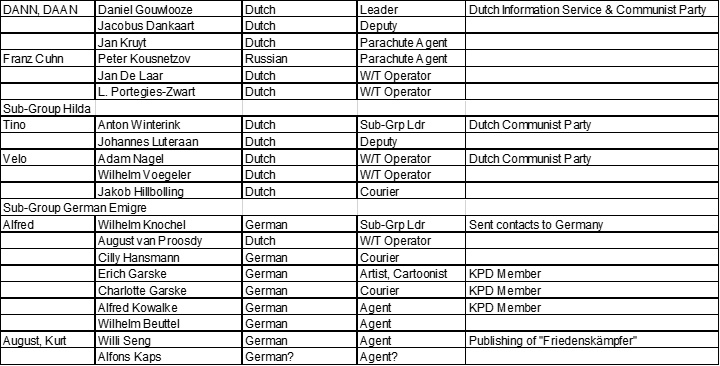 The Germans broke van Proosdy by interrogation, and in July 1943 began a round-up of his communist contacts in Holland. Jan de Laar was the first to be arrested. In August 1943, Gouwlooze’s deputy, Jacobus Dankaart, was arrested. A W/T operator recruited by Dankaart, Lambertus Portegies-Zwart, escaped arrest, as did Gouwlooze.

In autumn 1943, Gouwlooze learned that Dankaart was interned in a hospital at The Hague. At great personal risk, he assisted Dankaart’s escape. In the process, however, he left a trail of clues. In November, Gouwlooze was arrested in Utrecht.

In June 1942, the Germans located the Wenzel operation in Brussels, using radio direction-finding equipment. Both he and Jeffremov were arrested.  Wenzel and Jeffremov both broke under German interrogation. Jeffremov revealed the names of his subagents.

One of the subagents, Maurice Peper was arrested. He was a courier, and had contacts with Winterink. Ultimately, through Jakob Hillbolling, Winterink was arrested.

Winterink was taken to Brussels. He resisted interrogation for two weeks before he agreed to cooperate. Beginning in September 1942, the Germans played Winterink’s radio back against the Soviets. This operation was called “Beam Tanne.” Moscow, however, was not deceived, because both Nagel and Daniel Gouwlooze had warned them. 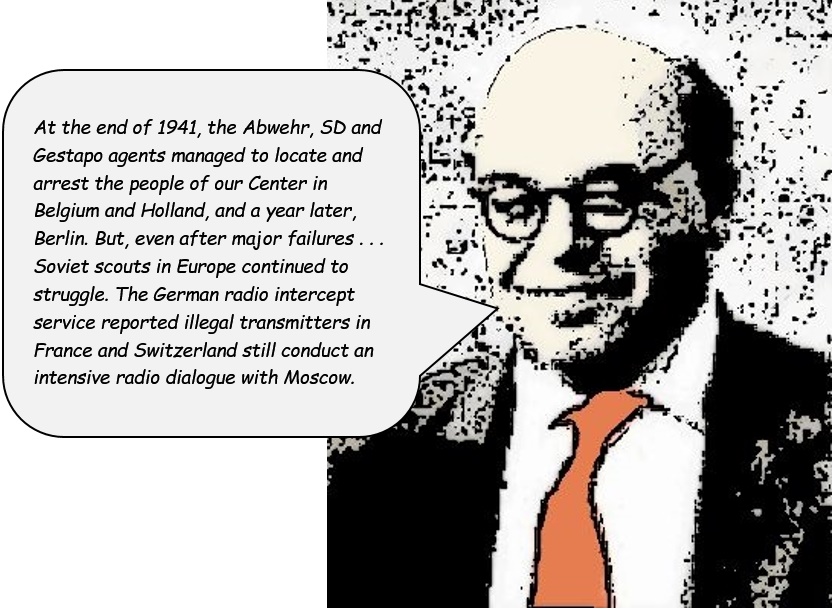