I have long been a fan of WW2 Colourised Photos, one can but marvel at time, dedication and skills often put in use to colourise a vintage WW2 black&white photograph. Often in addition to colourisation, there’s been a lot of effort put in describing the background of the photograph and the soldiers in them, and what their fate was.

I am responsible for 2D Graphics for Campaign Series, and as all work makes Jack a dull boy, I need my distractions. What better than to try to achieve something different with my trusty graphics editor. Here it is, my first WW2 colourisation!

Making of the colourised version

Not just the picture, but the story behind it, too!

Obviously, to begin with, one needs the original photograph of interest, and permissions to use it if the colourisation is to be published. For the benefit of us history geeks, Finnish Army has made all their wartime photographs available at SA-kuva.fi, under Creative Commons CC BY, requiring that they are credited, and that photographs are not used for inappropriate or unlawful purposes. So we are good to go!

I wanted to try colouring one of the assault guns, and having looked at the SA-kuva archive, ended up  choosing picture # 151597.

Picture comes with an original description (translated to English) written at the time: New assault guns being shown to Field Marshal Mannerheim and to President of the Republic. Assault Guns on parade. Enso, 1944.06.04.

More of that in a bit. Here’s the original: 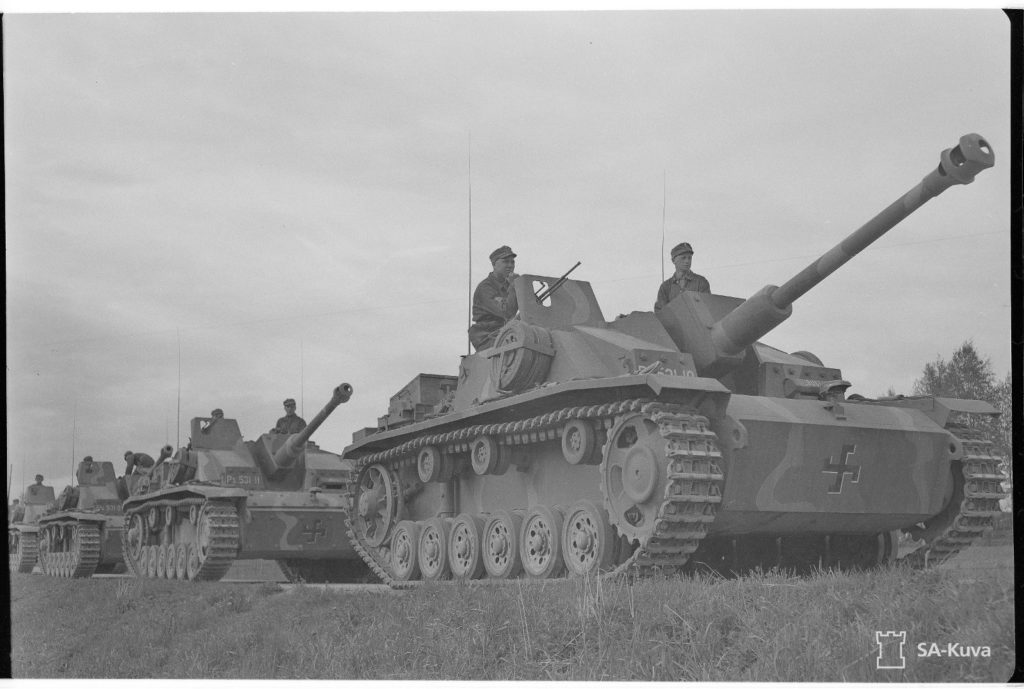 So, what we have here is an authentic Finnish Army photograph of Finnish Assault Gun Battalion, in spic&span condition, readying to parade in front of  the Finnish Top Brass, on June 4, 1944.

I thought this would be not only an interesting picture to colourise, but also easier to get up to speed, as there’s no foliage, dust, wear, etc on the equipment.

How colourisation is typically done is that first the original picture is cleaned up, and contrast and brightness adjusted. That’s what I did as well. There were quite a few specks in the original negative, so I first removed those. Then, unfortunately, there was quite a lot of granulation in the original, so I had to blur it a tad, to make it look smoother.

That done, with my graphics editor (I use GIMP), I added several transparent layers on top of the original, and then dedicated each of them to a certain colour or a certain aspect of the picture. I ended with a dozen or so layers there, one for grass, one for sky, one for each of the camo colours, skin, uniforms, dust, what not.

For each of them, I then adjusted their transparency setting so that the colours appear naturally on top of the original. This opens up an almost endless amount of variations, where I ended up using not too strong colours, at least for the first version here.

All this took quite a few hours, but all worth the effort.

Update: Finally, what you could next, and what I ended up doing as well, is to “Photoshop” it a bit using your favourite photograph editor, in my case Affinity. Worked wonders, to make the original effort look like any of your contemporary snap shots!

Choosing the right colours and hues

Part of the colourisation effort in trying to make a timeless, colourful version of the orginal, is to get one’s facts right!

One of the peculiarities with colourising this picture is that there are no surviving original colour pictures of any WW2 era Finnish vehicles in their camo scheme. As odd as that sounds, those are the cards we’re dealt with, and for instance for the modelling community, it has been an endless source of frustration.

What is known of course, from the many surviving original guidelines, is that the three colours used in the scheme were

However, their exact hues have been lost in time.

The closest we can come are the surviving equipment carrying the camo, with Bofors 37mm anti-gun guns perhaps the best examples, as they had a folding gun mantle, which was closed the time they were in storage: 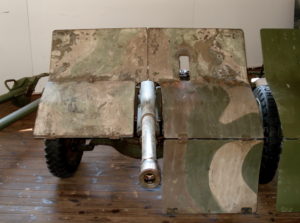 From there, and from other similar pieces of equipment, it’s been possible to determine what the original hues were. Not an exact science, but close enough anyway.

Based on research done by a Finnish historian Esa Muikku, the RAL RSD codes for these colours were:

What is left before publishing the photograp is the background information part. So here goes:

On parade were the men and equipment of the Armoured Division, and their most modern formation, Assault Gun Battalion, with their Stu-40 Ausf. G assault guns, procured from Germany in summer 1943.

Shown here are the armored fighting vehicles of battalion’s 2d Company. There was just one assault gun battalion at this stage, of 30 Stu-40s, with another similar batch (29, to be exact), arriving in July 1944, forming the 2d Assault Gun Battalion at that stage.

Those familiar with Finnish history might take note of the date of the parade, as June 4th was the birthday of Field Marshal Carl Gustaf Mannerheim.  Accordingly, he was the recipient of this very parade, together with the president of republic, Mr Risto Ryti.

At front is the Ps.531-10, nicknamed ‘Bubi’, the second assault gun of the I Platoon (of three assault guns), 2d Coy. Here’s some interesting facts about her.

It was customary the driver of each vehicle got to name it, often naming their vehicle, often after their sweethearts. As for  ‘Bubi’, it is understood not to be a particular sweetheart, but a misspelled version of English word ‘Baby’…

Kills were credited for the gunner. ‘Bubi’s gunner Olli Soimala was the tank ace of the battalion, with eleven confirmed kills during the summer 1944 battles, before September 1944 armistice with Soviet Union. Battalion soon adapted a practice where each kill would be painted as circles on assault gun’s main gun, so ‘Bubi’ had eleven of those around her gun tube (there’s link to a restored ‘Bubi’ at the end of this blog post).

To the right is the assault gun commander, First Sergeant Börje Brotell, and to the left, I assume, is either the gunner Olli Soimala or loader Armas Launikko, with driver Sulo Kauppi the one of the four-man crew certainly not  visible here.

What about these soldiers in the picture, what became of them?

Again, this picture was taken on June 4, 1944, and in a matter of only a few days – on June 10, 1944 – the Soviet Viborg-Pedrozavodsk Summer offensive would hit the Finnish front.

These men, so much at their leisure here, would find themselves in the hottest of hot spots in the next coming weeks and months…

I am happy to report they all survived the war, as did the assault gun, which is now standing guard at Parola Garrison, home of the modern Armoured Brigade cadre formation.

The other two assault guns with their markings visible, Ps. 531-11 and Ps. 531-8,  both survived the war, both the men and the assault guns.

Assault guns with visible markings in the picture are:

2d Company pictured here was the luckiest company in this sense, as they only lost one vehicle in the fighting that summer. All in all, this Assault Gun Battalion  lost eight Stu-40s in exchange to 87 confirmed enemy kills.

With all that said, here’s the colourised picture, finally: 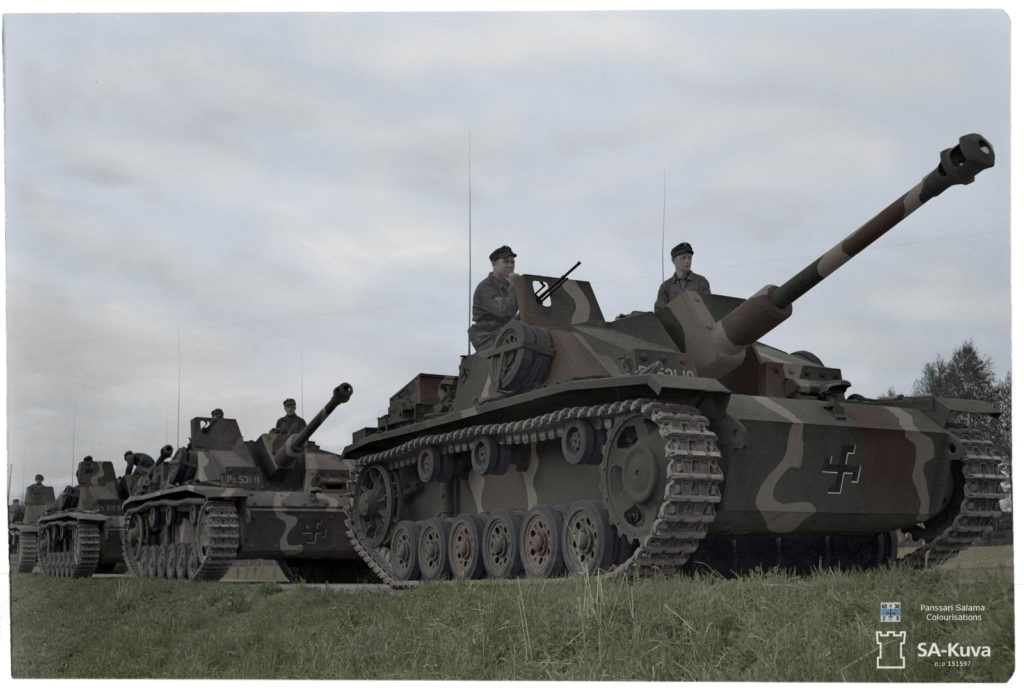 I hope you enjoy it, together with the history of the men and their vehicles!

For more information about Finnish assault guns, I can recommend Mr Andreas Lärka’s excellent webiste, here’s a link to our ‘Bubi’ at his site.