I have been playing CS ever since the original East Front was released. At times, I would take a break from the game, mostly due to time commitments elsewhere, and have played other games but I have always returned to CS. I attribute my continued enjoyment of this long running game franchise to our community of gamers, the friendships among us that have developed over the years and the incredible number of scenarios covering everything from the Spanish Civil War, the Italians fighting in Ethiopia, the Pacific Theater and, of course, the carnage on the Russian Front.

Full credit must be given to all the scenario designers and I will embark on a series of Q&As with the designers I have derived countless hours of enjoyment by playing their games. I won’t be able to interview everyone and while I was absent from CS there has been a few designers such as Tanker Tony and Dan Caviness creating ambitious games. If designing scenarios were easy, I would have created a ton of them by now, so even if this Q&A series misses a few of your favorite scenario designers I would like to extend my appreciation to everyone that has spent the many hours creating scenarios, thereby strengthening our gaming community. 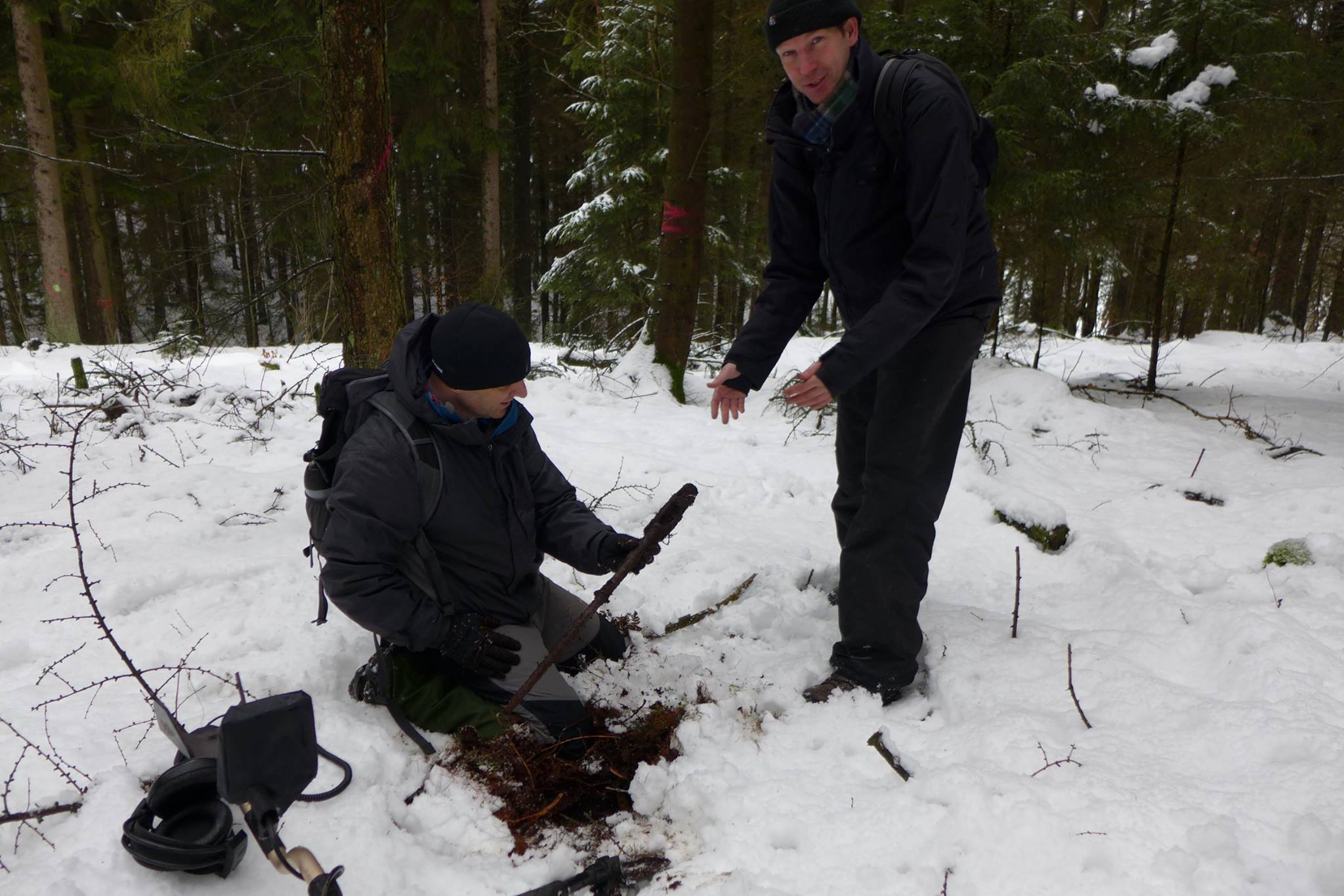 1:  How long have you been playing CS?

I have been playing CS since EF I came out somewhere in the nineties. Before that I used to play a game called Close Combat or something. I think it was a Microsoft game at that time but I’m not sure. Shortly thereafter I started playing Steel Panthers. In the beginning of CS I merely played without much thinking. I used to play by email against a Danish guy and lost all the time. Only later at the same time when I started designing scenarios my gameplay became much better and more serious.

2:  What prompted you to start designing scenarios?

I did a few fictional things in the scenario editor for fun in the beginning, but a few years later I started to combine it with my other hobbies: WWII history and battlefield archaeology in particular. For years I would make annual trips with my elder brother to the Ardennes and explore what still could be seen and found on those former battlefields. We would usually prepare those trips by reading a particular book on a certain part of the battle in advance. In 2002 or 2003 we read the book The Battle of The Bulge in Luxembourg by Roland Gaul. After the battlefield visit to this southern flank of the Bulge, I tried to replicate the events I read in the book and the battlefield and landscape I had seen in the scenario and map editor of CS WF.  At that time the first version of the later “Southern Shoulder” scenarios was born. I posted the scenario on “wargamer.com” and after a while I received some positive feedback from 2 gentlemen by the names of Jim Puff and Don Fox. They invited me to join a wargaming community called The Blitz and from there on the scenario designing became serious fun. Sadly, within one or two years Jim Puff suddenly passed away after a heart attack while at his work place I think it was. 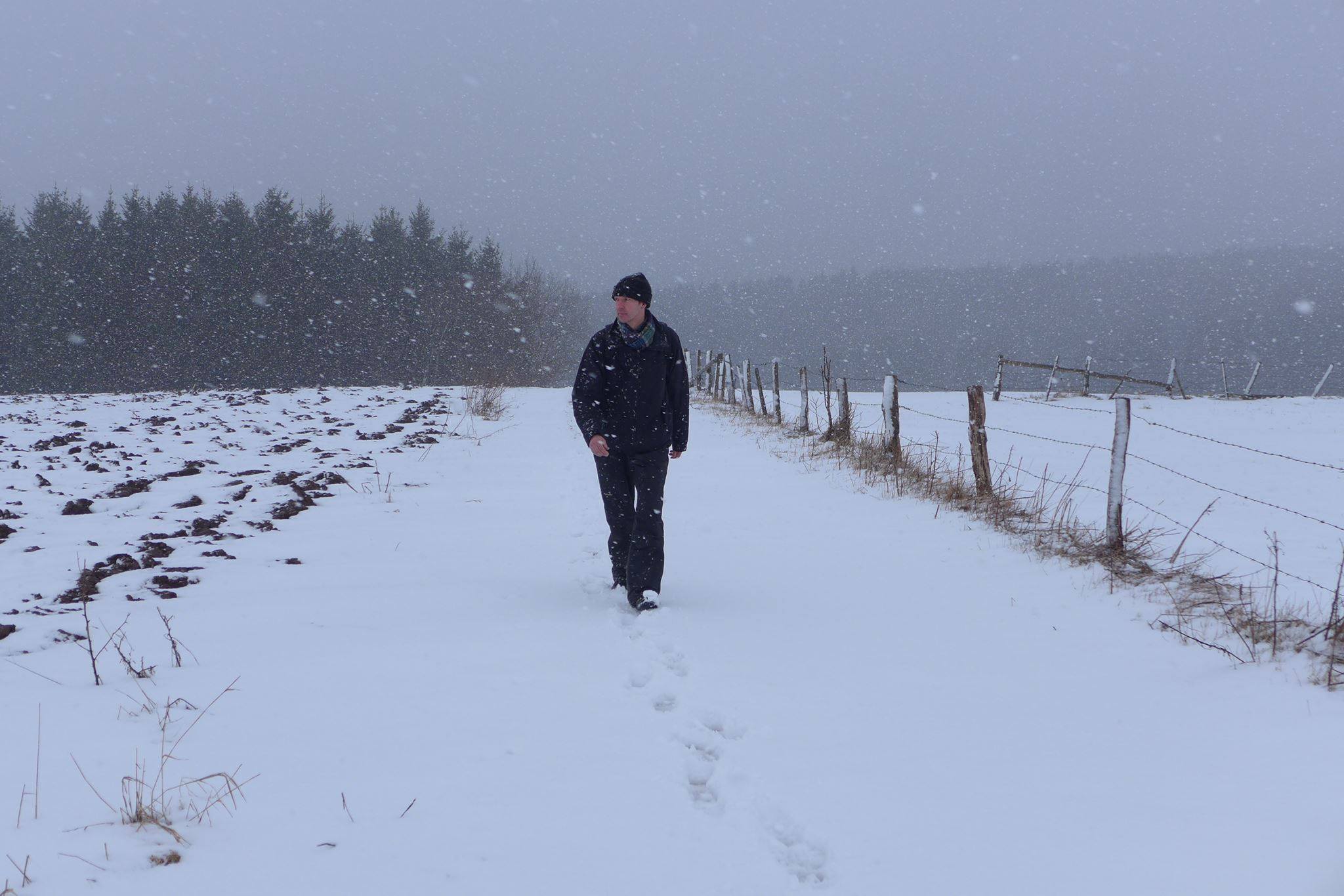 Huib taking a walk in the Ardennes

3: What is the scenario(s) are you proudest of.

I don’t remember how many scenarios for CS I made anymore, quite a few I think and some in cooperation with other designers.  Probably the best scenario I made as far as I’m concerned is “A Pivotal Day for the 82nd”. It deals with the 82nd Airborne Division combat around Nijmegen during Market Garden. For the Allied side of that history I used a book called “All American All the Way” by Phil Nordyke which is an excellent unit history. About the Germans in these events much less was known. Even if you have a book like “It Never Snows In September” it doesn’t give you all the detail needed about the German counterattack towards Nijmegen. Fortunately, I managed to get a hold of a very rare book by Heinz Bliss and Bernd Bosshammer called “Das Fallschirmjäger Lehr-Regiment” that is very detailed on what happened there from the German perspective.

While this scenario was my highlight I guess, after that I made some interesting scenarios and scenario plans. Unfortunately, they were never released or finished since after that at the CS legion we needed to concentrate on Middle East and the same time my spare time was dwindling as I moved to a more demanding position in my working life. So eventually I dropped out of the CS legion and transferred the things I had done for CS ME and Vietnam to Jason. CS WF stuff remained on the shelf and I might even have lost the files over time. 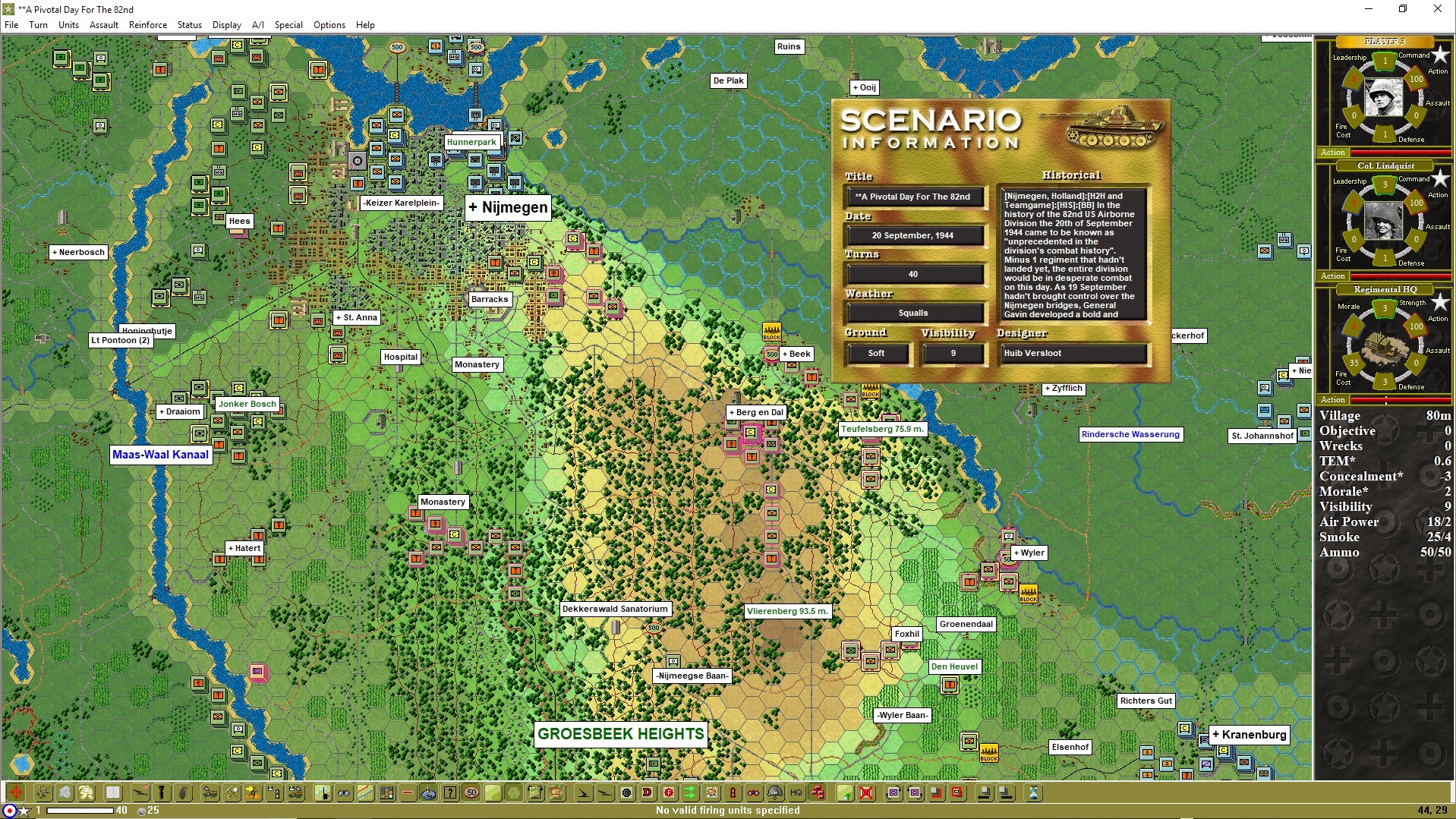 4: What is your process for scenario design? It must be difficult to try and recreate a historical event but also create an enjoyable scenario.   How do you go about addressing this?

I don’t remember the precise process anymore as it has been a while. In the previous interview you had with Don, I think he described it well. You start by designing the map and you determine the scope. In the past I wrote a few documents about scenario designing and map making. I don’t know if they still exist somewhere but I would guess they still apply.

Making a good scenario is almost like writing a book to me. You have to make sure to get all the details right (at least I’m quite purist when it comes to the OOB etc.). I would always like to have both sides of the story. So normally I would want to have both Allied and German documentation. I read and write German as well so that makes it easier.

In most cases I would also combine with my other hobby, which is visiting the battlefield, but that is only nice and not necessary to deliver a good scenario. For enjoyability and balance some “feeling” is involved I think. For balance you can do a lot with victory conditions and points vs unit losses etc. I think I described that somewhere in one of those documents. I had a “system” that worked very well, but by now I have forgotten that “system” lol.

5: You mentioned that visiting a battlefield in not necessary to deliver a good scenario? Is this because of the nature of the period you are designing a scenario for (larger battlefields over wide areas as opposed to, for example, Waterloo) or the terrain has changed over time (urbanisation or regrowth of forests) or maybe personal inclination?

Indeed, it is not necessary, it is fun though. What is necessary is a good period topographical map, or knowledge of the terrain changes since the events in case you would use google earth to map for example. I used to use both; the topographical map to know what human structures and terrain type existed and google earth to know the terrain heights. I would then make a transparent hex overlay in google earth and by hovering the mouse over each hex I would know the height value of that hex.

Every year I used to go to the Ardennes with my elder brother for a mid-week, to investigate a subject, (mostly a unit that participated in the battle of the Bulge or Hürtgen) that we had studied beforehand. The last years we were also joined by a friend of ours who has been a staff sergeant in the Royal Army Medical Corps. He was very skilled in using the metal detector and could identify almost any rusty object we dug up.  On the last trip we dug up a piece of metal and it wasn’t even completely out of the soil and he said “It’s a Garand”, before I could even see it was a rifle.

As I said we would read /study and from what we read we would try to find evidence. For example, we read the book “Victory was beyond their grasp” about the German 272nd VG division and they had been in very close combat with the Americans on a slope just east of Kommerscheidt. We found cartridges of both sides mixed and hand grenades etc. It was evidence that had really been a fight of man to man as described in the source.

7: When I visited Holland a few years back and we were driving to the Airborne Museum Hartenstein you were telling me about another hobby. It is not game related but I think interesting in how you catalogue bird activity in a certain area over time. I’m not sure how but I think the same attention to detail and aspect of discovery and documentation required for bird watching would come in useful for game scenario design?

My other hobby is something that I actually already started when I was a child. It is bird watching. This hobby ended basically at the age when you get interested in “other birds” lol. When my dad gave him his camera with zoom lens a few years ago, it just started from there again. You never forgot what you learn at a young age so I could still identify a lot of bird species. The good thing is that just like battlefield archeology it is outdoors. In Holland quite a bit of statistical data is collected of birds and nature. So each year I count all the breeding birds in a patch of nature near Amsterdam, that has bit of forest, swamp and a lake so has many different species of birds.  Very early in the morning is the best time walk your round to count the birds, as they are singing and you can identify them by their song, as that is much easier than by visual recognition. You enter the species in the app (with GPS coordinates) on your smartphone and send it over to SOVON (which is the institute that collects the data). Over the months that the birds are breeding (from March to July) you walk several rounds and software (each species has certain parameters) calculates how many individual territoria of each species are present. Modern technology is very helpful in this.

The sad thing is that since I was young there are now 50% less birds in Europe. Like in many areas, the rise of industrial agriculture has wiped out many wild plants, insects and ultimately the animals that eat insects: birds.