The Vietnam War was very different after the 1968 TET Offensive. The US had a new President, and the American people’s views shifted dramatically. This next series of articles covers the years from 1969 to 1973. This period ended with the Paris Agreement. But first, an overview of this period is in order.

NVA was still recovering from their losses from the 1968 TET, but in 1969, they wanted to test the new US President Nixon. There were some attacks, but on a much smaller scale. These were all quickly beaten back. Long Binh, Bien Hoa, and Da Nang were attacked. The offensive was not as impressive as the previous year, but did show ability of the Communists to mount attacks at will.

The years of 1970 and 1971 lacked significant TET offensives, and during this period the NVA was rebuilding its forces and defending attacks in Laos and Cambodia.

There was a massive “Easter Offensive” in 1972. (It did not begin at the New Year, but 30 March.) By this offensive, North Vietnamese accomplished two important goals: they had gained valuable territory within South Vietnam from which to launch future offensives and they had obtained a better bargaining position at the peace negotiations being conducted in Paris.

Also known as “Nguyen Hue,” several “Fronts” were attacked. These included the DMZ area firebases down to Quang Tri, the A Shau Valley toward Hue,  and An Loc and areas south toward Saigon.

The NVA employed 14 Divisions, but did not seek a decisive victory. Rather their goals were limited to crippling ARVN forces, and to convince the US of hopelessness for continued South Vietnamese support.

In 1969, the US began bombing NVA camps in Cambodia. As a background, in 1965, neutral Cambodia anticipated Communist victory. Prince Sihanouk made a deal with China and North Vietnam, permitting use his country for NVA staging bases.

But by 1969, Sihanouk had doubts about his bargain. The NVA brought in 300000+ troops, took over several northern provinces, and drove  out most of the Cambodians.

As a result, Sihanouk became discontented, and  changed his outlook about the North Vietnamese. He virtually welcomed  US bombing.

US President Nixon secretly ordered “Operation Menu:” carpet bombing of NVA camps. Between March 1969 and May 1970, B-52 bombers flew 3875 missions against targets in Cambodia. This was known only to a limited number of Americans in the field, and in Washington, DC. Nixon and Kissinger thought this could be hidden from Congress and the press.

But, the US Congress got word of this, and there was a big political controversy in Washington. In December 1972, a former Combat Skyspot officer, Hal Knight wrote to Sen. William Proxmire (D-Wis.), about the secret bombings. Proxmire, a noted Pentagon critic, forwarded the letter to the Senate Armed Services Committee.

But, air operations in Cambodia continued after the cease-fire in Vietnam in January 1973. In summer  1973, the Senate challenge to Cambodian air strikes reached the boiling point. Nixon, weakened by the Watergate scandal, agreed to end the bombing unless Congress approved. 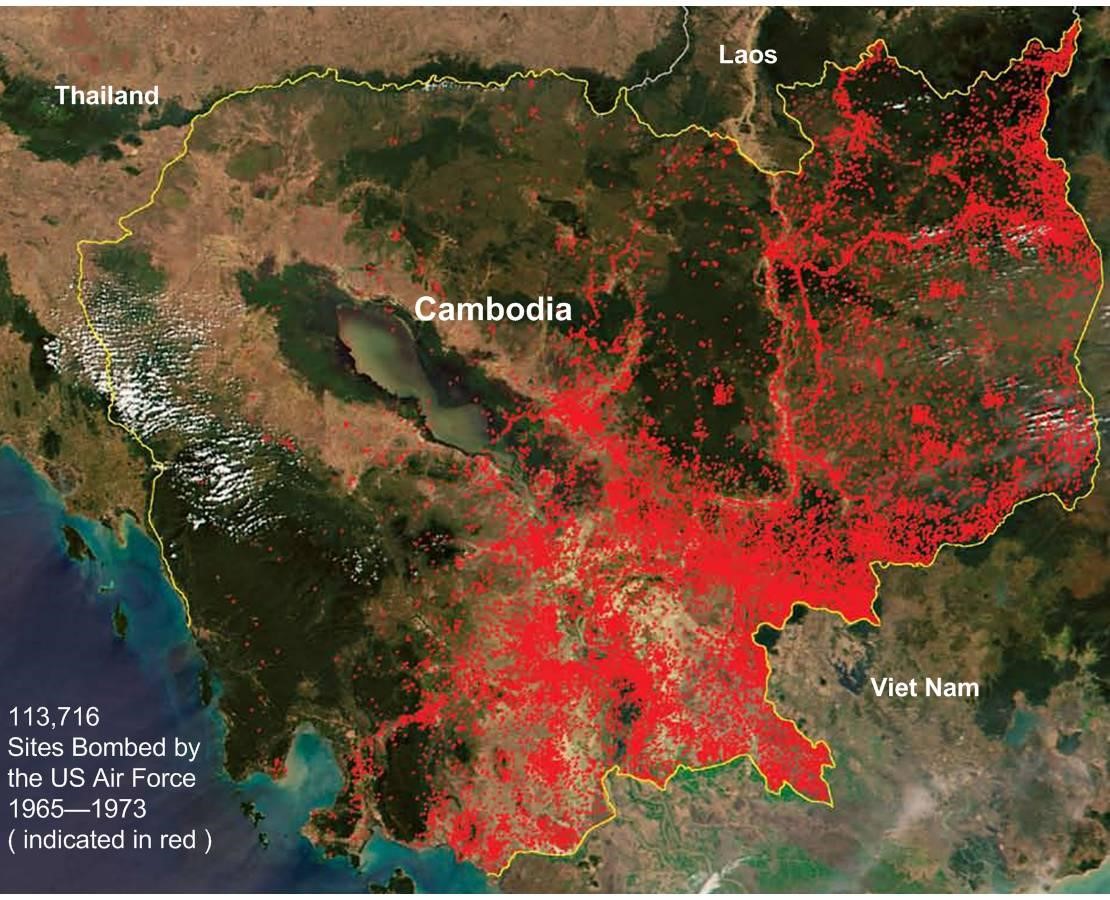 Four Kent State University students were killed, and nine injured on 4 May 1970. Members of the Ohio National Guard panicked, and fired on a massive crowd protesting the Vietnam War. The tragedy was a watershed moment for a nation divided by the conflict in Southeast Asia.

In its immediate aftermath, a student-led strike forced the temporary closure of colleges and universities across America. Some political observers believed the events tilted public opinion against the war, and may have contributed to the downfall of President Richard Nixon.

Protests across the country in the latter half of the 1960s were part of organized opposition against US military activities in Southeast Asia, as well as the military draft.

In fact, President Richard Nixon was elected in 1968 due in large part to his promise to end the war. And, until April 1970, it appeared this campaign promise was being kept, as military operations were seemingly winding down. But, authorization to invade Cambodia, rekindled the anti-war fervor.

The Cambodian Campaign (also known as the Cambodian “Incursion” or Invasion) was a series of US and ARVN operations in eastern Cambodia during 1970. The invasions were a Nixon plan with the objective to defeat approximately 40,000 NVA troops along the eastern border.

Cambodian neutrality and military weakness made its territory an NVA sanctuary, where Communist forces could establish operating bases. With the US shifting toward  “Vietnamization” and withdrawal, it sought to support the South Vietnamese government by eliminating the cross-border threat.

A Cambodian regime change gave an opportunity for the incursion, when Prince Sihanouk was deposed and replaced by pro-US General Lon Nol.

A series of South Vietnamese and Lon Nol operations captured a few towns, but the Viet Cong narrowly escaped the cordon. The operation was partly a response to a North Vietnamese offensive on 29 March against the Cambodian Army, that captured large parts of eastern Cambodia.

Operation “Fishhook” involved US forces. 3rd Brigade, 1st Cavalry Division, and the 11th Armored Cavalry Regiment attacked north across the Cambodian Border in support of ARVN 3rd Airborne Brigade. This operation failed to eliminate many communist troops or to capture their elusive headquarters, known as the Central Office for South Vietnam (COSVN,) as they had left a month prior. The amount of captured material prompted claims of success.

In early 1971, MACV had intelligence of an NVA logistical build-up in near Tchepone, and wanted to disrupt a potential offensive. There was reluctance to let the South Vietnamese (ARVN) go it alone against the NVA. But, US and South Vietnamese high commands also hoped a victory in Laos would bolster ARVN’s morale and confidence, showing that could defend their nation given continuing withdrawal of US troops.

Ultimately, an ARVN airborne assault reached Tchepone, which had been abandoned. Their goal in Laos seemingly achieved, President Thieu and General Lam ordered a withdrawal of ARVN forces beginning 9 March. It continued through the rest of the month, destroying Base Area 604 and any supplies discovered in their path. The plan of operation Lam Son 719 was never to hold Tchepone, but to put troops there and destroy as much supplies and trail infrastructure as possible.

Under codename “Operation Linebacker,” the 7th Seventh Air Force and US Navy Task Force 77, conducted a bombing campaign against North Vietnam from May to October 1972.

Its purpose was to halt or slow the transportation of supplies and materials for the Easter Offensive. Linebacker was the first continuous bombing effort conducted against North Vietnam since Rolling Thunder in November 1968.

In addition to interdicting North Vietnam’s road and rail system, Linebacker systematically attacked its air defenses. The North Vietnamese Air Force, with approximately 200 interceptors, contested these attacks throughout the campaign. Navy pilots, employing a mutually supporting “loose deuce” tactical formation and many with TOPGUN training, enjoyed a kill ratio of 6:1 in their favor in May and June, such that after that, the North Vietnamese rarely engaged them.

The stalled offensive in the South and the devastation in North Vietnam had helped to convince Hanoi to return to the bargaining table by early August.

The resumed meetings produced new concessions from Hanoi, which promised to end deadlocks plaguing negotiations since 1968. Gone were Hanoi’s demands for the ouster of South Vietnamese President Nguyen Van Thieu, and replacement by coalition government. The US agreed to a cease fire in place, which conceded that North Vietnamese soldiers could remain in South Vietnam. The diplomatic impasse was broken and Nixon ordered a halt to all bombing above the 20th parallel on 23 October and on 26 October Kissinger announced that “peace is at hand.”

The main negotiators of the agreement were United States National Security Advisor Henry Kissinger and North Vietnamese politburo member Le Duc Tho. They were awarded the 1973 Nobel Peace Prize, although Le Duc Tho refused to accept it.

The provisions for the agreement included: Withdrawal of US and allied forces within sixty days, return of prisoners, US clearing of mines in North Vietnamese ports, cease-fire in place in South Vietnam, establishment of a “National Council of National Reconciliation and Concord,” and neutralist side to implement democratic liberties and organize free elections.

Further provisions included: “Joint Military Commissions” and an “International Commission of Control and Supervision” composed of Canada, Hungary, Indonesia, and Poland to implement the cease-fire.

Foreign troops would withdraw from Laos and Cambodia. Introduction of war materials in South Vietnam were banned unless on a replacement basis. Further introduction of military personnel into South Vietnam was banned. Finally, the US agreed to financial contributions to “healing the wounds of war” throughout Indochina.

‘Scuttlebutt’ is rumor or gossip.  In the days of sail, the communal water butt was favorite.  One may imagine sailors swapping yarns around the water butt. (Later drinking fountain.)

Note that the Marines are part of the US Navy, have close relations with them, and share an overlapping culture and jargon. 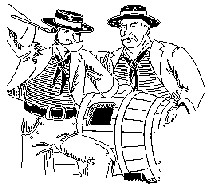 Ernest Clifford Cheatham Jr. (July 27, 1929 – June 14, 2014) was a United States Marine Corps officer, veteran of the Korean War and the Vietnam War, recipient of the Navy Cross, and American football defensive tackle, who played for the Baltimore Colts and Pittsburgh Steelers.

Cheatham was from Long Beach, California. He played college football at Loyola Marymount University. After college, the Pittsburgh Steelers selected him for the 1951 NFL Draft. But before going in the NFL, “Big Ernie” served in the United States Marine Corps during the Korean War. After the war, in 1954, he played a total of 6 games in his NFL career, 4 for the Steelers, and 2 for the Baltimore Colts.

He decided on a career as a Marine officer. In the Vietnam War, Lt. Col. Cheatham was commander of the 2nd Battalion, 5th Marines. In February 1968, Cheatham was at Phu Bai Combat Base when ordered into Hue to take command of companies already engaged. Before leaving, he reviewed Marine urban fighting doctrine, which advised staying off streets, and advancing by blasting through walls and buildings. He successfully led recapture of the Provincial Building in southern Hue.

As a Major General in 1982, Cheatham assumed command of the 1st Marine Division. 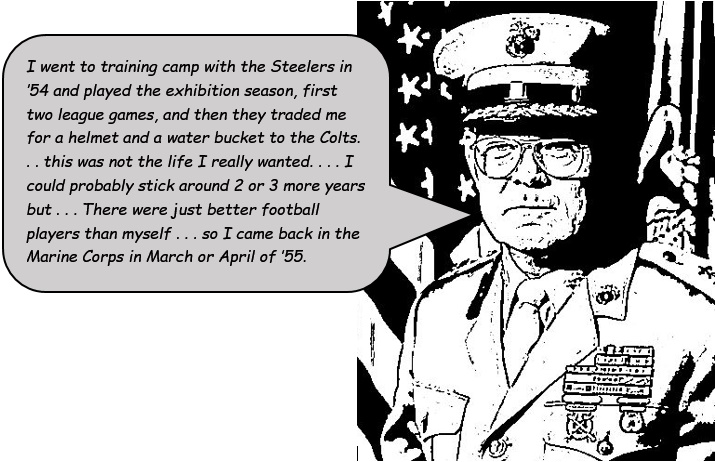