Guess how many months negotiators haggled over the shape of the table? Well actually, the talks were stalled for five months over the bombing issue, but during that time, the North Vietnamese demanded  a circular table, while the US and South Vietnam side wanted it square. This article is a primer on the Paris Peace Accords of 1973 and will explain the main issues of the talks.

The Paris Peace Accords were a peace treaty signed on 27 January 1973, to end the Vietnam War. It  included North Vietnam (DRV,) South Vietnam, the United States, as well as a Provisional Revolutionary Government (PRG.) In effect, it was to remove all remaining US Forces, and stop, at least temporarily, fighting between the three remaining powers.

It all began when US confidence was shaken after the 1968 TET Offensive. President Johnson halted bombing operations (Rolling Thunder,) over North Vietnam to encourage Hanoi to begin peace negotiations. The bombing halt covered most of North Vietnam, but operations continued in areas just north of the DMZ.

Shortly thereafter, Hanoi agreed to discuss a complete bombing halt, and representatives of both parties met in Paris, France on 10 May. The DRV Foreign Minister,  Xuan Thuy, met with US Ambassador W. Averell Harriman.

Negotiations stalled as North Vietnam demanded all bombing of North Vietnam be stopped. The US demanded de-escalation in South Vietnam. Finally, on 31 October, President Johnson agreed to end the airstrikes and serious negotiation began.

The table shape issue was also wrangled over during the May-October period. North Vietnam favored a circular table because it signified that all representatives, including the National Liberation Front (NLF,) would have “equal” voice. South Vietnam argued for a square table, that symbolized the two distinct sides in the conflict. Ultimately, they agreed on northern and southern government representatives sitting at a circular table, and all other parties sitting at individual square tables.

Nixon Election and New US Negotiators

Prior to the November 1968 elections, Richard Nixon, presidential candidate, began getting involved behind the scenes with the negotiations. Nixon asked  a prominent Asian-American politician Anna Chennault (widow of WWII Flying Tigers Gen. Claire Chennault,) to be his “back-channel” to South Vietnam President Thieu. She agreed, and learned that Thieu had no intention of attending the peace conference.

After winning the 1968 US presidential election, Richard Nixon assumed office in January 1969. He replaced US ambassador Harriman with Henry Cabot Lodge Jr., who was later replaced by David Bruce. National Security Advisor Henry Kissinger was to become the chief US negotiator, however.

Also that year, the NLF set up the PRG to gain government status at the talks. However, the primary negotiations did not occur at the peace conference at all, but were carried out in secret discussions between Kissinger and Le Duc Tho, who had been deputy secretary of the Central Committee of the Southern Region.

From 1969 to 1972, the talks continued, but a tentative agreement was not reached because of key issues. The North Vietnamese demanded ouster of President Thieu; to be replaced by a coalition government. The US wanted all NVA forces to leave South Vietnam. And, although a bombing halt occurred in 1968, this issue arose again in 1972, when Nixon ordered Operation “Linebacker.”

But, this did not resolve the issue. Even in August 1969,  Lodge informed Kissinger that: “. . . However he dresses it up, he is calling for the removal of Thieu–Ky–Huong (by us) and the formation of the “peace cabinet” of which they have spoken before.”

In secret negotiations in Paris 31 May 1971, Kissinger retracted the demand that US and DRV forces mutually withdraw, conceding that the armed forces of the DRV will remain in South Vietnam after a peace agreement. The demand for a mutual withdrawal had been one of the early US demands.

During the 1972 Easter Offensive, President Nixon announced that major concession, that the US would accept a ceasefire in place as a precondition for its military withdrawal. In effect, the NVA forces could remain in place. However, he also countered with “Operation Linebacker,” a significant bombing campaign in North Vietnam. It blunted the North’s drive in the South as well as inflicting damage in the North.

The final major breakthrough came 8 October 1972, when In a meeting with Kissinger, Le Duc Thọ significantly modified his bargaining line, allowing the Saigon government to remain in power, and that negotiations between the two South Vietnamese parties could develop a final settlement. Within 10 days, the secret talks drew up a final draft. Kissinger held a press conference in Washington during which he announced that “peace is at hand.”

At the time the 1973 Paris Peace Accords were signed, the South Vietnamese government controlled about 80 percent of the territory and 90 percent of the population, although many areas were contested. 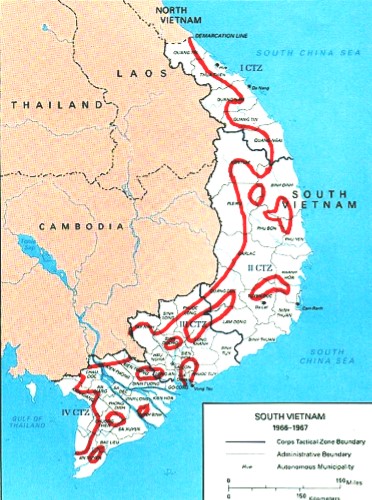 At a meeting 30 Nov 1972, Nixon addressed the Joint Chiefs of Staff, making similar assurances. Chief of Naval Operations, Admiral Elmo Zumwalt attended, and said: “The President’s discussion of the status of the cease-fire agreement increased my sense of being on a strange planet . . . It was perfectly obvious to all of us at the time that the promise of massive American assistance to South Vietnam and of prompt US retaliation to serious truce violations were the critical elements in securing the cease-fire and the fullfillment of these promises would be the critical element in maintaining the cease-fire. Yet the Administration never really let the American people – or Congress – in on this non-secret, apparently on the assumption that the critical element in persuading the Americans to accept the terms of the cease-fire was to allow them to believe that it meant the end of any kind of American involvement in Vietnam no matter what happened there after the cease-fire was agreed to. Not even the JCS were informed that written commitments were made to Thieu. There are at least two words no one can use to characterize the outcome of that two-faced policy. One is ‘peace,’ the other is ‘honor.'”

In late 1972, President Nixon won re-election by a wide margin. However, the Watergate scandal had already broken into the news. President Nixon probably had an idea this scandal would hamper any military moves against North Vietnam, in the post cease-fire era.

The US put great pressure on Thieu to sign the treaty, even without the concessions wanted by the South. To persuade Thieu, Nixon pledged substantial aid to South Vietnam, and to demonstrate his seriousness, Nixon ordered the heavy Operation Linebacker II bombings of North Vietnam in December 1972. (Known as “Christmas Bombings.”)

When Le Duc Tho agreed to resume “technical” discussions on 30 December, Nixon ordered a bmbing halt. With US committment to disengagement (and after threats from Nixon that South Vietnam would be abandoned if he did not agree,) Thieu had little choice but to accede.

On 15 January 1973, President Nixon announced a suspension of offensive actions against North Vietnam. Kissinger and Tho met again on 23 January, and signed off on a treaty that was basically identical to the draft of three months earlier. The agreement was signed by the leaders of the official delegations on 27 January 1973, at the Hotel Majestic in Paris, France. 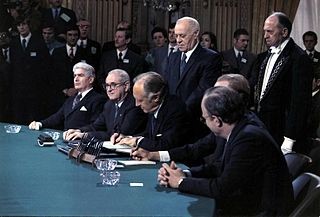 As a result of their efforts, Henry Kissinger and Le Duc Tho were awarded the 1973 Nobel Peace Prize. However Le Duc Tho refused to accept it because “. . . Vietnam could not get a ‘tie.’ No matter how far the US minions are yet to fall, it is the only Nobel Prize for Vietnamese people.”

The cease-fire was declared, but hostilities resumed between North and South Vietnam only days after its signing. The agreement’s provisions were routinely violated by both sides. This elicited no response from the US. Nixon was embroiled in Watergate, and would have been politically too weak to act.

Ultimately, the Communists enlarged the area under their control by the end of 1973. The NVA gradually built up military infrastructure, and two years later, were in a position to launch the successful offensive that ended with the fall of Saigon, and the South Vietnamese government in 1975.

“108. Letter From the Head of the Delegation to the Paris Peace Talks on Vietnam (Lodge) to the President’s Assistant for National Security Affairs (Kissinger)”

“No Peace, No Honor: Nixon, Kissinger, and Betrayal in Vietnam”, Larry Berman 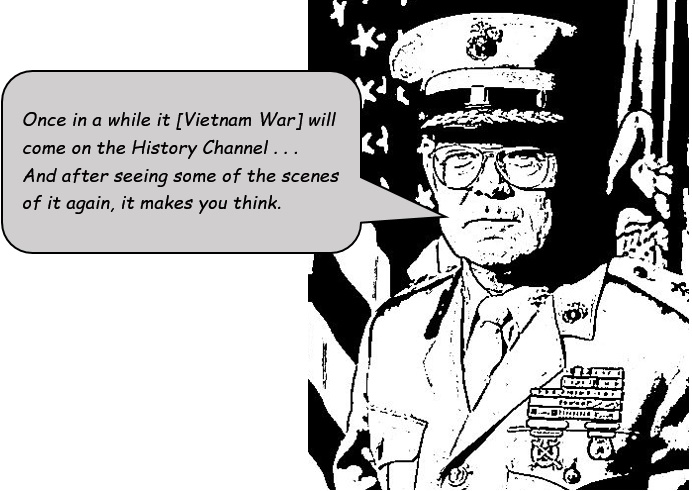