The new CS Vietnam game will feature units and scenarios of the First Indochina War. Although most everyone has heard of Dien Bien Phu, there is much more to this conflict, which I will explain in this introduction.

Traditional Vietnamese society was held together by Confucian norms. Divided into the classes, scholar-officials or mandarins, farmers, artisans, and merchants, the Emperor ruled with the “mandate of heaven.” Buddhism was the main religion, but the Mandarin class followed Confucianism. Laos and Cambodia had similar social structures, but were not as advanced as Vietnam.

The Vietnamese capital was Hue, in the region known as Annam, in central Vietnam. Tonkin was in the north, with Hanoi and Haiphong as its major cities, and Cochinchina was in the south, with Saigon predominant.

Starting in 1858, the French invaded and took over forts at Danang. After some battles,

Emperor Tu Duc agreed to a treaty with, giving France several provinces. Within several years, all of Indochina, including Laos, Cambodia, and Vietnam were under French control, by a Governor-General. Nguyen dynasty Emperors continued to govern, but under French supervision.

French colonial rule was elitist, narrow-minded, and ruthless. Governors sought to protect their authority by depriving the country of its native leadership. Bureaucracy took over administration of village gentry and chiefs, thereby removing legal autonomy and degrading the social system. Vietnamese attempts to organize political parties and labor organizations, were stamped out by police control over travel, mail, and publications, which repressed movements for collective action.

With the fall of France in 1940, the Japanese took over Indochina, but allowed the Vichy French Governor-General to administer civilian government. However, this ended in March 1945 when Ambassador Matsumoto Shunichi gave Governor-General Decoux two hours to surrender. Most French units were disarmed and interned the next day, as Japanese forces took absolute control of Indochina.

Birth of the Viet Minh

The Viet Minh declared their opposition to the Japanese, and aligned with the Allies. A guerilla war began to undermine the Japanese rule, which ended in August 1945 anyway. On August 29, 1945, Ho Chi Minh formed a government in Tonkin, and proclaimed Vietnamese independence.

After a long process, Ho Chi Minh founded the Viet Minh movement. He wanted to end French colonialism, to obtain Vietnamese national self-determination, equality, a constitutional republic, and to liberate all political prisoners. They began developing a political organization, based on Lenin’s ideas for anti-colonialism.

When the French returned, the Viet Minh at first tried negotiating for certain control and rights, but when this failed, they began a guerilla war in March 1946. During the years from 1946 to 1949, the Viet Minh, under the military leadership of General Vo Nguyen Giap established a base area in Viet Bac. They used “Mao’s People’s War” approach:

1) Establish remote bases to avoid direct confrontation with superior enemy technology. 2) Develop of clandestine political organizations among the people. 3) Wear down the enemy through tactics of feint and deception. 4) Gradually develop power equilibrium to enable a general offensive.

A significant turning point occurred in 1949 when the Chinese Communist People’s Liberation Army pushed into southern China and forced the Chinese Nationalists to flee to Taiwan. Now China had a communist government, and its leaders supported the Vietminh. This gave the Vietminh these advantages: 1) Sanctuary if needed, 2) Training camps in China, and 3) Arms and supplies provided by China. But, the Vietminh had to first clear all the French border outposts to have free access to China along the entire border. Hence, the Border Campaign began.

With these, the Viet Minh seriously challenged conventional French forces.

At the end of WWII, France was eager to re-establish its empire. Gaston Monnerville proclaimed, “Without her empire, France would today be just another liberated country. Thanks to her empire, France is a victorious country.” This was the sentiment of many French citizens, and continued to resonate throughout the 1940s and early 1950s.

In early 1945, the CEFEO (Corps Expéditionnaire Français en Extrême-Orient,) was created to support Saigon-based General Gilbert Sabattier, commander of “Indochina French Forces.” General Philippe Leclerc was the initial CEFEO commander.  The composition included voluntarily-enlisted indigenous tirailleurs from the French colonies in  Morocco, Algeria, and Tunisia, and and South-East Asia. Additionally, French Foreign Legion units, consisting mainly of European volunteers, supplemented the corps. Most of the professional colonial airborne units (BPC) and the entire Chief of Staff were metropolitan French, as were some colonial infantry, artillery and specialist units.

The CEFEO retook Hanoi and Haiphong in March 1946 and began trying to re-establish control of the country. The urban areas were secured, but the French forces lacked troops to control rural areas. In late 1947, Operation Lea began when the French launched mobile forces including ground, riverine, and airborne elements into the Viet Minh mountain base area of Viet Bac, north of the Tonkin delta. Destruction of the Viet Minh command was nearly accomplished. But, they had insufficient mobile troops to cordon, search, and deny the Viet Minh base areas. The French had to withdraw to the Tonkin delta, dissipating mobile forces into local counter-guerrilla sweeps. The Viet Minh reoccupied their base area.

By 1949, the war was at a stalemate. The French had more fire power, but could not maneuver its elusive enemy into full battle. Ho’s forces were surviving but were not able to drive the French out of the country.

The French had to react to the 1950 Viet Minh Border Campaign, and were desperately pressed to hold areas in the northern Tonkin area. When General de Lattre took command, he instituted agressive tactics, and inspired the troops. He established the fortified “De Lattre” Line in 1951 to defend the lower portion of the Tonkin Red River Delta including Hanoi and Haiphong.

The Viet Minh 308 Division made a major thrust on Vinh-Yen. The French defended with two mobile groups under Colonel Varmxem, but were nearly destroyed. Only with

Vinh-Yen’s artillery, and French fighter-bombers did the French manage to kill 6,000 Viet Minh, and take 500 prisoners.

Undeterred by his unsuccessful attack against Vinh-Yen, Giap now shifted his battle force towards Mao Khe, with the 308, 312, and 316 Divisions. After a fierce fight, in which the Viet Minh nearly occupied Mao Khe, the French forces held.

De Lattre had to return to France at the end of 1951 because he was dying of cancer. General Raoul Salan replaced him. He was defensive minded, using a “barbed-wire strategy.” It was under his command that the 1952 battle of Na San occurred. Here, the French employed the “hedgehog” concept. It consisted fortified positions, but with space in between, rather than a single defensive line. The Viet Minh attacked and infiltrated the spaces between the French bunkers, but since they were out in the open, they were decimated by artillery and F6F Hellcat strikes. This apparent success formed the basis for subsequent French strategy.

Lietenant-General Henri Navarre took over CEFEO in May 1953 with a great initiative to win the war. He developed the Navarre Plan, which had the following points:

1) Divide Indochina into separate theatres, one north, the other south. 2) Assume defensive in north. 3) Increase forces. (12 infantry battalions)  4) Create a pacification program in the Tonkin Delta. 5) Launch offensives in the south. 6) Create and train a Vietnamese National Army. 7) Form several mobile divisions by fall 1954. And 8) Seek a major decisive battle.

General Navarre sought that decisive battle, and in late 1953 had two choices: Attack enemy bases in the Thai Nguyen “redoubt” or put his troops on the traditional invasion routes into Laos. Navarre chose to defend Laos. At the same time, he hoped to make this upland stronghold into a sufficiently attractive bait for Giap to commit elite divisions against it, in the hope of destroying them.

The location was a basin near Dien Bien Phu in the northwestern border area of Tonkin. The valley is 16 km by 10 km and surrounded by hills. The “airborne raid” Operation Castor, under the command of General De Castries, was only a means of placing troops there. The real intention was for it to become a “meat grinder.” The French hoped to repeat the success of Na San, and began fortifying the location with strongpoints, named “Gabrielle,” “Anne-Marie,” “Beatrice,” “Hugette,” “Dominique,” “Claudine,” “Eliane,” and “Isabelle.”

General Giap learned a valuable lesson at Na San. This time, he surrounded Dien Bien Phu, so that the French could not get supplies or reinforcements, except by air. He brought in a massive artillery force, in which cannons had to be disassembled, for portage up the steep, narrow mountain trails. These were located in concealed positions, not easily spotted from airplanes. Also, large numbers of anti-aircraft guns were brought in. The French had no idea of the massive artillery facing them.

On 13 March, 1954  General Giap’s attack began with a heavy artillery barrage. The Viet Minh made a “human wave” assault on two outlying hill positions overlooking the central redoubts and French strongpoints. This gave the Viet Minh observation points to  locate and hit the airfield and strongpoints with artillery.

The Viet Minh dug zig-zag sap trenches to approach Castries’ strongpoints. This reduced their exposure to small arms fire, and allowed them to get closer before making assaults.

The 40,000 Viet Minh methodically attacked the 12000 defenders. The French required 200 tons of supplies per day, all to be delivered by air drops. But, as the Viet Minh encroached on the airfield, and harassed air transports with 37mm AA guns, the French were soon in short supply.

One by one, the strongpoints fell, until finally on 7 May, 1954 General Castries surrendered. 11721 prisoners were taken. This colossal defeat accelerated the Geneva negotiations, and the war ended.

Marcel Bigeard was a French paratroop officer that fought in WWII, Indochina, and Algeria. Indeed, Lt. Col. Bigeard commanded the Airborne Groupment (Composed of the 1er RCP and the 6e BPC,) at Dien Bien Phu, and fought from his bunker at strongpoint “Eliane.” He was taken prisoner with all the rest of the French defenders . . .

“Vietnam and the French,” Sanderson Beck

“The Columbia Guide to the Vietnam War,” David L. Anderson 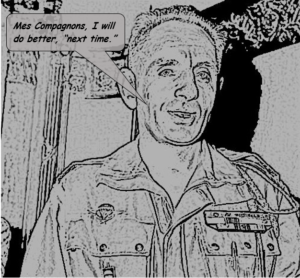