This next phase of the siege focuses on the Battle of the Huguettes, which ultimately strangled the French from the west, causing complete loss of the airfield. Also, this articles covers other situations. The French field hospital faced many hardships, but the doctors endured, with Genevieve’s gracious help. And, for a while, the Viet Minh suffered a minor morale crisis – or as General Giap expressed it: “rightist and negative tendencies.”

First Battle of the Huguettes

The next logical attack location in the west was H7, as it was nearest to Anne-Marie.

The 1st Company, 5BPVN was placed at H7 soon after the loss of Gabrielle. French Capt. Bizard led these Vietnamese paratroopers. A platoon of the T’ai light company, CSM 417 was also assigned there. Legionnaires of the 4th Company 1/2 REI held H6, which was near the end of the airfield runway. Lt. Rastouil commanded them.

The remainder of the Huguettes were defended by the rest of 1/2 REI and the T’ai light company CSM 418. Major Clemencon was the Legionnaire battalion commander.

The 413 CSM company abandoned strongpoint Francoise on 1 April. Their remnants were relocated to D3. Thus, the stage was set for the First Battle of the Huguettes. It was fought in two phases, the first Viet Minh attack resulted in the French abandonment of H7, and the second phase, in which a strong French counterattack, organized by Bruno, salvaged H6 from loss. These battles were fought during 3-6 April.

Initially, the Viet Minh took H7, but the French counterattacked and retook it. However, they realized that it was untenable, and it was abandoned. Here is a description of the scenario representing this combat:

The French western sector was under pressure from 17 March when Anne-Marie was abandoned.

Francoise was the next strongpoint lost when Thai auxiliaries of CSM 413 deserted 1 April. During the early morning of 1 April Viet Minh mortars opened fire on Huguette 7. In a ploy to exploit Viet inability to adjust to unforeseen situations, the Captain of the 1st Company 5BPVN pulled out of the northern and central portions of H7 and wihdrew to the southern bunker. The Viets moved into the positions, but with little room to maneuver. French artillery blasted them with high explosives. At dawn, the Vietnamese paratroopers regained H7. In the late evening of 1 April, the 36th Regiment of the VM 308 Division renewed their attacks on H7 and the 165th Regiment of the 312th Division began attacking H6. By 0400 2 April, swarms of Viet Minh were inside H7. In bitter hand-to-hand fighting, a mixed group of paratroopers, Legionnaires, and Thai auxiliries held through the darkness in a corner bunker. The Legionnaire commander of 1/2REI sent an ad hoc relief force which included three tanks. The Viet Minh infantry began to fall back. At daylight, H7 was back in French hands. However, the Viet Minh were still strong, and had recoilless rifles at Ann-Marie, which could continuously fire on H7. At 0800, French high command decided to abandon H7. Thus, Huguettes phase one finished with the Viet Minh taking a French strongpoint. 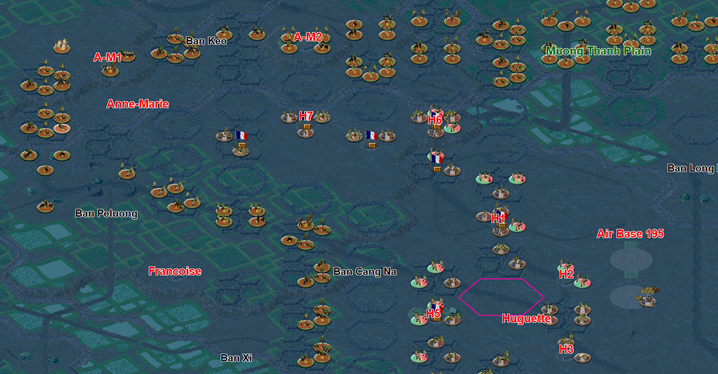 Screenshot from DBP#7 Huguette Phase One 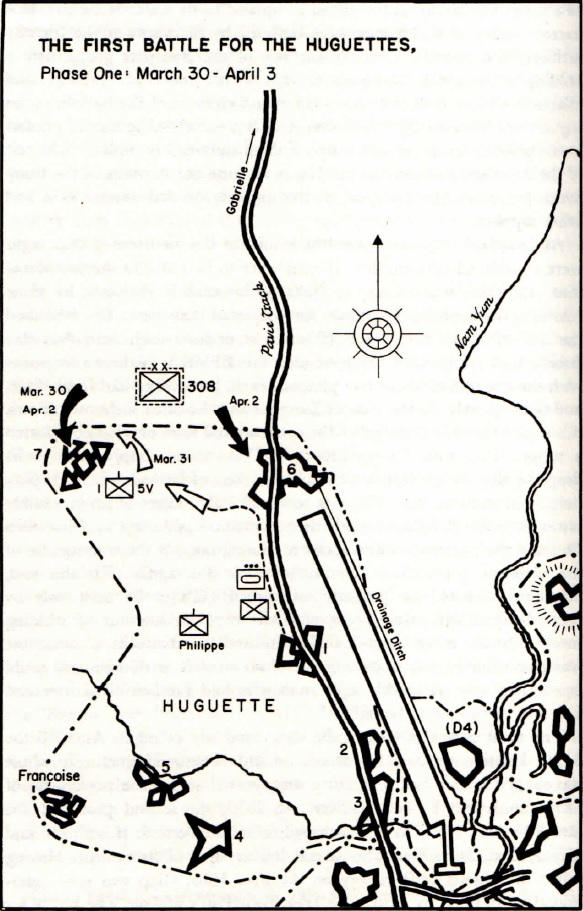 Communist forces continued to press their attacks on H6 after gaining H7. But, the French were determined to keep control of H6, which also meant the airfield. The various units in the counterattack included 2nd Company II/1 RCP, Service Company 8BPC, Mixed Intervention Company 1/13 DBLE, tanks “Conti” and “Ettlingen,” and Bruno’s own 2nd and 3rd Companies 6BPC. In the end, the French managed to hold on to H6.

The French western sector was under pressure from 17 March when Anne-Marie was abandoned. Francoise was the next strongpoint lost when Thai auxiliaries of CSM 413 deserted 1 April. During the early morning of 3 April, Huguette 7 was abandoned after a major attack. A truce was agreed to for dead and wounded removal. But at 2200, Viet Minh artillery opened fire on Huguette 6. The VM 165th Regiment and 401 Artillery Battalion were moving into position to attack Huguette 6. At this point only 88 Legionnaires were left on H6.

A Composite Intervention Company – formed from the Legion 1/13 Demi-Brigade was sent to reinforce H6. At 0030 on  5 April, Hugette 6 was being attacked from west, north, and east. Other French reserve units were thrown in: Special Air Service Company of the 8th Assault Battalion moved north along the airfield drainage ditch. They were accompanied  by tanks “Conti” and “Ettlingen.”  The tanks sustained bazooka hits, but stayed in the battle. “Conti” later struck a mine, wounding some crew members. At 0315, the 2nd Company II/1 RCP Colonial Paratroopers were committed. They rushed onto the metallic plates of the airfield and attacked the southernmost elements of the Viet Minh force. And, at 0420 engaged in hand to hand combat and broke into peripheral H6 trenches. At 0500, Bruno organized two companies of the 6eBPC, and at 0600 reached the line where the 8th Assault had dug in.

The Viet Minh then committed a fourth battalion, 14/165 to their attacks. But, daylight had come, and French artillery began hitting the Communists hard, and by 0830, fighter bombers appeared and began hitting Viet Minh troops out in the open. By 1015, the Viets were in retreat, and more than 500 lay dead on the breastworks of Huguette 6.

Hardships of the French Field Hospital

The French hospital was underground, and adjacent to the main command post. Langlais referred to it as the “Catacombs.” Dr. Grauwin was the Mobile Surgical Detachment 29 commandant, who faced almost insurmountable challenges in caring for the wounded.

It began as a space for only 44 beds, dugouts for operations, X-Ray and recovery rooms. There were two main problems: First medical supplies, particularly blood plasma, surgical gloves, catgut, and wound alcohol, were almost always short. And, there was the problem of having enough sanitary space for the wounded.

Later, after a controversy with intelligence group GC 8, the area for beds was extended so there was a total of 200. But, it was not completely sanitary by any means. It was being cramped by the ever-expanding graveyard nearby.

This proximity, coupled with the lack of disinfectants available, caused white maggots to spread from the graveyard into the hospital. Grauwin had to explain to the wounded how maggots fed only on dead or putrescent flesh, and though disgusting, actually contributed to keeping wounds clean.

An air landing mishap actually became a blessing, however with the arrival of Genevieve. On 28 March, ambulance aircraft Delta Coca 434 was piloted by Major Blanchet, on a familiarization flight for night landings. The rest of the crew included Air Force nurse Genevieve Galard. The plane landed, but developed an oil leak. In the shuffle of heavy fighting, repairs were delayed until daylight. When the engines started for takeoff, it drew Viet gunners attention, and the plane was hit and burned. The pilot and crew managed to escape, unharmed.

Genevieve was thus stuck at Dien Bien Phu. But, she joined Dr. Grauwin’s staff, and helped care for the wounded. At first, she slept among the wounded, but Langlais surprised her with a room, with walls covered by parachutes, and furniture scrounged from the mess. A  few days  later, she gave her room to some seriously wounded paratroopers, and went back to sleeping in the main room.

The modest girl with blue eyes, brown hair, and a cheerful smile was never called “The Angel of Dien Bien Phu” by the soldiers there. That moniker was given by the rear-echelon press. Camp personnel just called her “Genevieve.” Later, Langlais asked de Castries to give her an accomodation. Hanoi authorized the Croix de Guerre and Legion d’honneur for her. 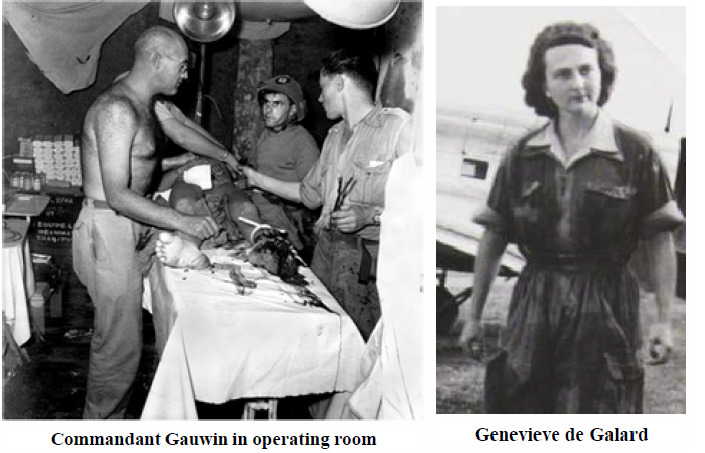 There was also a crisis of morale, of sorts, in the Viet Minh forces. It was during the week of 11-18 April. French radio intelligence from within the fortress (Commando Group 8) heard agitated lower level VM commanders refusing to obey orders. Prisoners admitted that they had been forced to advance under threat of being shot.

Giap acknowledged in that at critical junctures signs of flagging and tiredness began to appear.  “After a  series of magnificent victories, we appeared to underestimate the enemy. We had to analyze and change this state of mind. Preparations were prolonged, notably after the second phase of the campaign, when fierce positioning battles were underway; it caused rightist hesitations during a time that affected the execution of tasks”.

Giap wrote further about this: “However, it was precisely at that time, that a rightist and negative tendency appeared among our officers and men,under various forms: fear of casualties, losses, fatigue, difficulties and hardships, underestimation of the enemy, subjectivism and self-conceit.”

As a result, the Political Bureau ordered: “All levels of the Party, the Party members, and the cadres must do their best to overcome rightist tendency, consolidate and raise their determination, heighten their sense of responsibility before the people, army and Party, resolutely correct the past mistakes, grasp further the principle of striking surely and advancing cautiously, at the same time, work against time, strictly obey orders, overcome all difficulties and hardships, and fulfil their task of securing’ complete victory for the campaign.”

French radio intercepts also discovered that the VM battalions 910 and 920 of 148 Regiment were being recalled from Laos. Battalion 970 of 176 Regiment was recalled. Giap ordered Battalion 900 of Regt. 148 to detach the 523 Signal Company and 121 Heavy Company for Dien Bien Phu. Also Regiment 9 of 304 was recalled back to support Regt. 57. 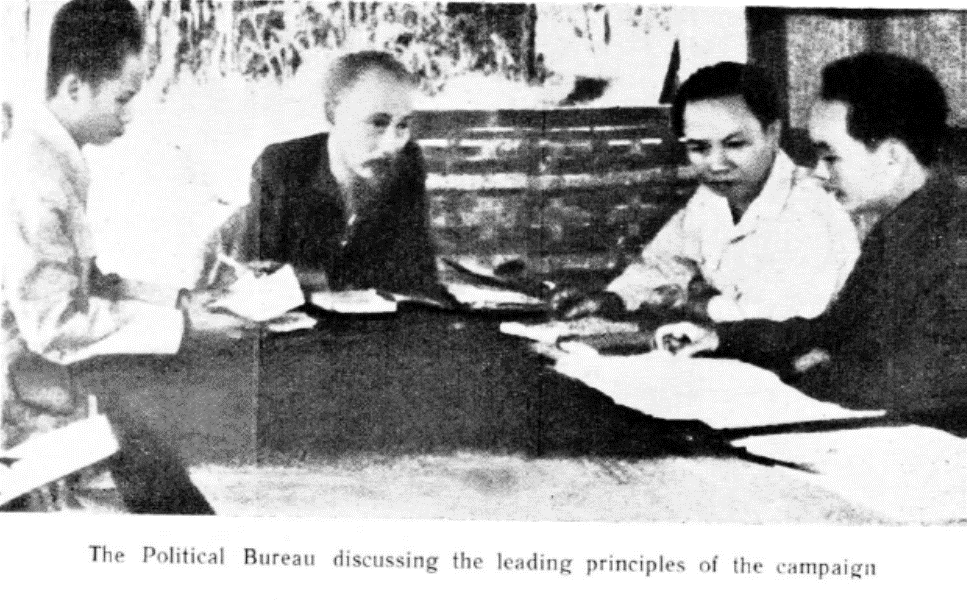 2nd Battle of the Huguettes

In the 2nd Battle of the Huguettes, that went from 12 to 21 April, the Viet Minh took H1, H4, H5, and H6. During this time, H4 was renamed Lily 3. Claudine 1 was renamed Lily 1 and new strongpoint, L2 was created to the northeast.

At this time, there are no CSVN scenarios for the 2nd Battle of Huguettes, but perhaps later, these may be developed. 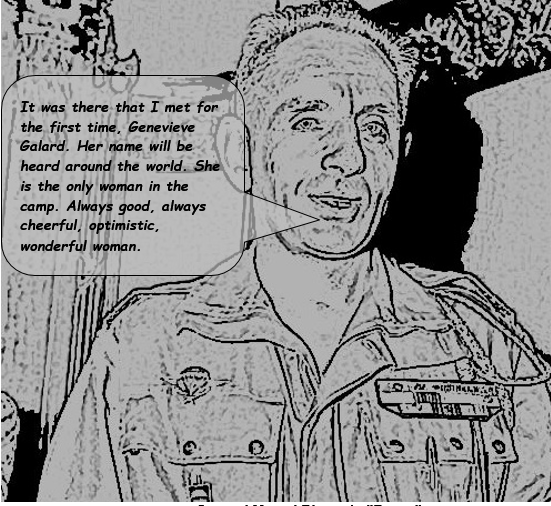