This series covers the ten CSVN scenarios about Dien Bien Phu. The articles will cover additional information, that is not simulated in the scenarios, such as parachuting supplies from high altitudes, or desertion and where to house deserters, or the unending Viet Minh trench digging. I hope this provides CS Legion readers with a preview of CSVN scenarios dealing Dien Bien Phu, coupled with a greater understanding of that campaign.

In 1954, French forces in Indochina attempted to follow the “Navarre Plan.” They found themselves facing two options, either attack Viet Minh bases in the Tuyen Quang and Thai Nguyen “redoubt,” or place troops astride the Laos invasion route. Staying true to his credo: “Always keep the initiative,” and “always on the offensive,” Navarre chose to defend Laos. In addition, Navarre sought a major decisive battle in which he could defeat the Viet Minh.

The initial parachute landings on Dien Bien Phu were called “Operation Castor.” Colonel Christian de Castries was the commander of GONO, (Groupe d’Operation Nord-Ouest) and at Dien Bien Phu. Likely, it was de Castries who chose the name, “Castor.”

Castor was a Greek mythological warrior hero, and twin brother of Pollux. They were sons of Jupiter and Leda. Through Homer’s Illiad and Odyssey, Castor became known for skill in horsemanship, and Pollux, for pugilism. (Operation Pollux was the evacuation of Lai Chau.)

You might wonder what branch was Colonel de Castries was from. He was a cavalryman. Castor – De Castries – cavalryman . . .  Coincidence?

Although raised in an aristocratic family, de Castries enlisted with the French Army as a cavalryman in 1922. After rising through the ranks to sergeant, he attended the Saumur Cavalry school as an officer candidate. He later excelled on the French International Riding Team.

In 1940, his commando troop operated behind German lines, and he was captured. Ultimately, he escaped from camp Oflag IV-D, and made his way through southern France into Spain, and finally Africa, where he linked up with Free French Forces. In 1944-45, de Castries commanded an armored squadron in Southern France.

After WWII, de Castries served at the War College in Paris, and was promoted to lieutenant colonel. General de Lattre was impressed, and requested de Castries for command in Indochina in 1951.

Later, Navarre promoted de Castries to colonel and assigned him the command of GONO, and the the Dien Bien Phu “base aero-terestre.” He put his faith in de Castries for success in the coming “major decisive battle.”

The base aero-terrestre is a remote base, with heavy fortifications. It has an airfield for resupply and reinforcements. The central core is heavily fortified, has abundant artillery, and is connected to the airfield, or even surrounding it. Strongpoints are placed around the core. They are heavily fortified with bunkers, and surrounded by barbed wire and mines. Finally, they are manned with infantry, heavy machine guns, mortars, and recoilless rifles. Between the strongpoints, there are open spaces, or rather “kill zones.” Here fighter-bombers and artillery barrages slaughter enemy attackers.

The idea is that attacking enemy would be “mown down” in the “kill zones” and would not even be able to close-assault the strongpoints. As long as the airfield were intact, the base aero-terrestre can replenish its supplies and ammo. And, it could fly out wounded, and bring in reinforcements.

This idea evolved from French success at Na San. This November 1952 battle first tested the fortified airbase, also known as a “hedgehog.” General Raoul Salan fortified the outpost and airstrip. It was supplied via C-47 Dakotas flying from Hanoi, and a garrison placed there. He thought that well-defended outposts, resupplied by air would invite Viet Minh attack, forcing them into conventional attacks.

General Navarre adopted the base-aero terrestre concept, and decided to use it at Dien Bien Phu, to defend Laos, and make the upland stronghold an attractive bait for Giap to commit his elite divisions. Navarre asserted that with such powerful forces, and so strong a defence system, Dien Bien Phu was “an impregnable fortress…”

At 0500, a C-47 transport plane, crammed with radio communication equipment and meteorological instruments, took off from Hanoi’s military airfield at Bach-Mai, and flew 300 km to observe conditions over the Dien Bien Phu valley. Visibility was poor with dry fog, but Brig. Gen Dechaux looked out the window, and then conferred with his weather officer. He remembered General Bodet’s words: ” . . . if the weather is too unfavorable, Dien Bien Phu will never take place.” But, Dechaux got up and went to the radio operator, who then transmitted a direct message to Hanoi Headquarters.

The message reached General Rene Cogny, commander of French forces in North Vietnam. It was immediately relayed to the Transport Air Commander waiting at Bach-Mai with a fleet of transport aircraft waiting to take off. At 0720, 20 November 1953, Operation Castor had begun.

The initial drop is the basis for the CSVN scenario DBP#1 Bruno Arrives. 6BPC landed in drop zone “Natasha,” which is just west of an old Japanese airfield north of the village of Muong Thanh. The II/1 RCP dropped on DZ “Simone” to the south, and subsequent heavy equipment dropped on DZ “Octavie,” to the southwest.

The name Dien Bien Phu means “Seat of the Border County Prefecture.” It actually designates the Tai village by the name of Muong Thanh. The Nam Yum river runs through the low valley, which is flanked by high mountains to the west and east. Route 41 runs from the south, and then northeast, and ultimately leads to Tuan Giao, a Viet Minh stronghold. Another road, Pavie Track, leads north to Lai Chau. It was at best a narrow dirt path, where even jeeps could not go in many places.

This scenario covers the initial parachute drop of 6BPC and II/1 RCP on 20 November 1953. The Viet Minh 148th Independent Regiment was headquartered there, and operated a training camp. At the time, its 910th Battalion was in the valley, and French intelligence knew this. But, they did not know that the Heavy Weapons Company 226 of Battalion 920 remained there with mortars and heavy machine guns. It was joined by a combat support company of the 675th  Artillery Regiment. This outfit had 120mm mortars and recoillless rifles.

The French managed to land, capture the airfield, and with the help of the II/1 RCP battalion, finally flushed the Viet Minh out of Muong Thanh, and assumed control of the valley. 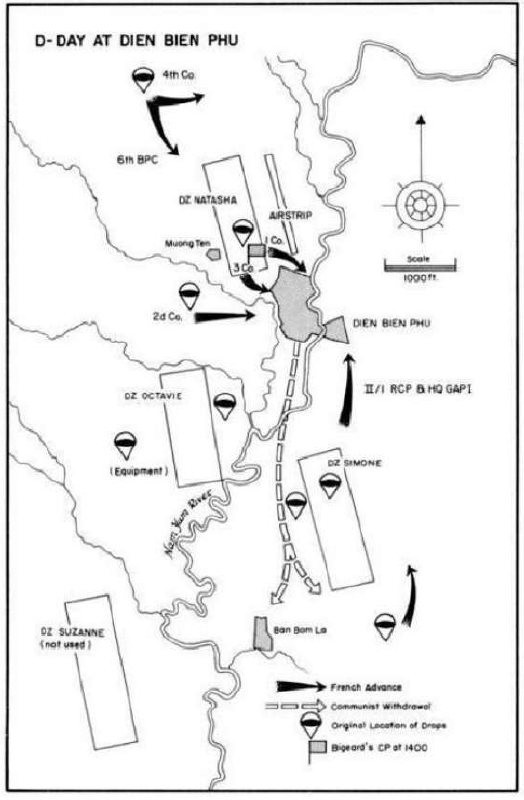 [Dien Bien Phu][H2H[HIS][CSL][ALL: NO VV] General Henri Navarre, commander of CEFEO decided to occupy Dien Bien Phu. He wanted to place troops astride the Laos invasion route, and seek a major battle, using the “base aero-terrestre” as bait. On the morning of 20 November, 1953 French paratroopers of the 6e Bataillon de Parachutistes  Coloniaux (6e BPC) and the 2nd Battalion of the 1er Regiment de  Chasseurs Parachutistes (II/1er RCP) landed on dropzones Natasha and Simone. Operation Castor’s initial objective was to secure the old Japanese airfield. With 65 C-47 Dakota transports, and  twelve C-119 “Flying Boxcars,” it still required two trips to get the lead elements into the valley, in the largest paradrop since WWII. The 6e BPC battalion, led by the daring Maj. MB, (callsign “Bruno,”) quickly assembled, and then secured DZ Natasha, while the II/ 1 RCP battalion ran into a difficulties as they were largely misdropped, and spread over a wide area. In addition, its mission to protect the Headquarters of Groupement Aeroporte 1 (GAP 1) slowed down efforts to join the attack. Poor radio  communications with the other units, and aircraft added to overall ineffectiveness. 6 BPC collided with the Viet Minh 910th Battalion, 148th Regiment, which had been conducting field exercises with batteries of the 675th Heavy Regiment and 226th Combat Support company. Fighting persisted until afternoon, when the Viet Minh eventually withdrew southward, hiding in heavily overgrown terrain along the Nam Youn River. 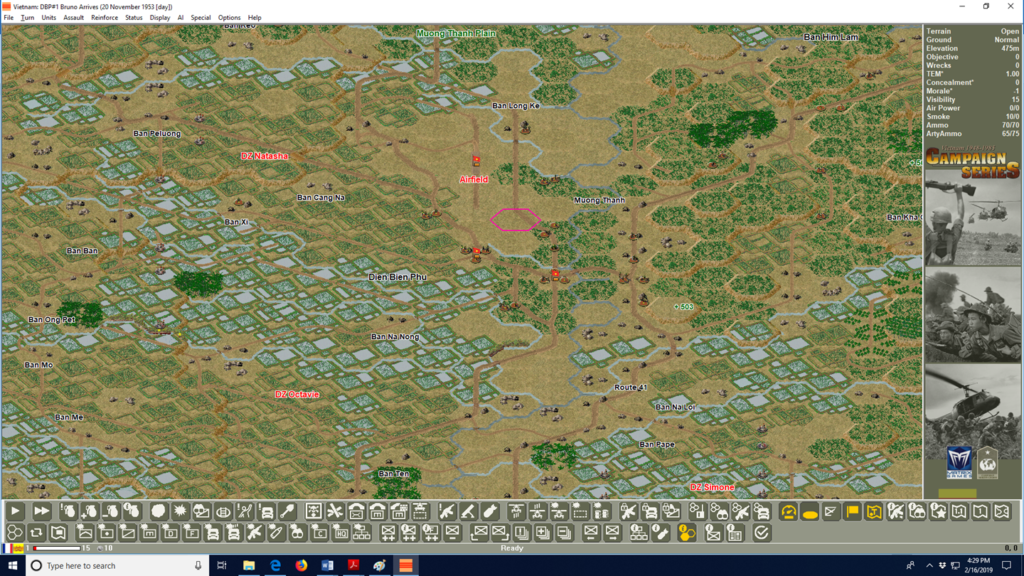 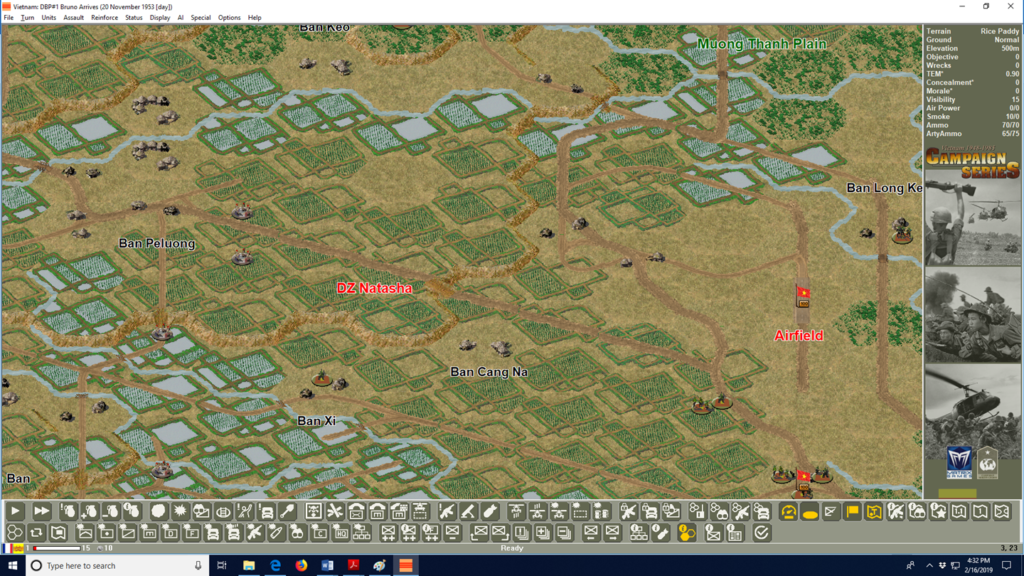 Zoom In Screenshot of Battlefield

With the landing of 4650 French troops, and the Viet Minh vacated, the work of transforming the sleepy river village into an “impregnable fortress” had just begun. Col. de Castries arrived by transport aircraft a couple of weeks later, (He was not parachute qualified,) as the engineers had finally refurished the 2000 meter airstrip with PSP, pierced steel plates.

The 31st Engineers played a major role in construction. One task was to build bridges capable of supporting the tanks of the 3rd Squadron, 1st Cavalry Regiment. However, Major Sudrat warned of a virtually insolvable problem.

Col. de Castries ordered all strongpoints to be capable of withstanding 105mm shells. This meant two layers of wooden beams or logs covered by a meter of closely packed earth, and topped by sandbags.  To protect one infantry squad, 30 tons of material were needed. A combat bunker for one machine gun required twelve tons. Sudrat estimated that to protect all Dien Bien Phu strongpoints, and two artillery battalions, they needed 36000 tons of materials.

This would require 12000 flights of C-47 transports. With 80 transports daily, devoted only to construction materials, they would need five months. Sudrat warned that this would be insufficient, but his calculations were ridiculed by de Castries’ staff. Local materials would have to suffice, and many village huts were torn down, and the lumber hauled to strongpoints.

The tanks were disassembled in Hanoi and transported to Dien Bien Phu in pieces. The company reassembled them on site.

General Giap began planning an attack on Dien Bien Phu. His main effort was building two roads for supply, one from Phu Tho, 225 km away, and the other to Thanh Hoa, 340 km away. Thousands of workers, called Dan Cong, were conscripted to build these roads.

The Viet Minh also formed supply battalions with tens of thousands of pack-bicycles and wheelbarrows, thousands of craft, and convoys of donkeys and horses. An estimated 15000 personnel were involved.

Finally, they moved artillery pieces up steep jungle roads, and set them into concealed bunkers, cut into the sides of the hills. These crews sometimes disassembled the cannons, hauled them in place in pieces, and then reassembled them in the final positions. 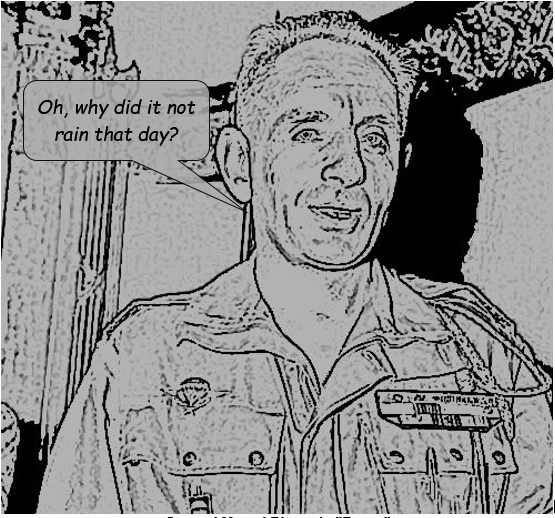