The French had a rude awakening, and a struggle for survival. But, they took positive steps to remedy the situations with Isabelle isolation, and plentiful Viet Minh anti-aircraft guns. Two scenarios,

DBP#4 Bruno’s Flak Raid, and DBP#5 Breakthrough to Isabelle are explained in this article along with other interesting information about the overall situation.

After the quick successive falls of Beatrice and Gabrielle, and the desertion at Anne-Marie, French morale was understandably low. Aircraft landings were very risky, and now only undertaken at night

and with extreme precautions. This limited the flow of supplies, and parachute supply drops became the main delivery method. With decreased supplies came more troop discontent.

Artillery Colonel Piroth’s suicide was disturbing enough, but de Castries chief of staff, Lt. Col. Kelly had a nervous breakdown, and sat in his bunker wearing his steel helmet. He was later flown out in an ambulance aircraft to Hanoi for briefing and psychological treatment. De Castries was rapidly losing his first echelon of command staff.

High optimism in Hanoi became gloom as dreadful radio reports poured in. Gen. Cogny, Northern Theatre Commander or FTNV (Forces Terrestres du Nord Vietnam,) had been privately pessimistic about Dien Bien Phu since its planning. But at this point, Cogny sent a top-secret message to Navarre that “a disaster at Dien Bien Phu is a distinct possibility.” On 17 March, Cogny flew over the fortress for observation. He considered parachuting in to direct the battle, as de Lattre had done at the battle of Vinh-Yen. But, his chief-of-staff Jules Roy talked him out of it.

The most crucial crisis was the melancholy afflicting Colonel de Castries. He became withdrawn from his men and staff, and rarely left the underground headquarters. Jules Roy later said he acted as though “a spring had broken inside him.”

Lt. Col. Pierre Langlais became concerned that de Castries was not providing adequate leadership. According to eyewitnesses, on 24 March, Langlais entered de Castries office along with several parachute battalion commanders. He effectively told de Castries that he would assume command, although unofficially, and make decisions about the conduct of the battle. As far as the outside world was concerned, de Castries would continue to retain the appearance of command, and make communications with Hanoi. De Castries did not protest, and seemed to concur.

Langlais and Bigeard (Bruno) continued to have good relations with de Castries, visiting him in his quarters each evening, and exchanging information and pleasantries. Further, Langlais remained one of de Castries’ nighttime bridge partners.

The Viet Minh losses at Beatrice and Gabrielle were very high, and General Giap slowed down the attack sequence a bit. Siege tactics were more widely employed. To the west, trenches were dug from the Anne-Marie strongpoint, and then southward to Ban Ong Pet, and then to the southwest, all the way to the Nam Youn River near Ban Ten.

To the east, Viet Minh trenches surrounded Dominque and Eliane strongpoints, and tied into the river just south of the French perimeter. Isabelle now had a ring of trenchworks as well. These were about kilometer and a half away from French breastworks, and cut across Route 41 at Ban Nong Nhai. French movement of supplies and wounded between Isabelle and the main fortress became more difficult and hazardous.

From the larger ring of trenches, zig-zag approach saps were “creeping” in a radial direction toward French lines. The 80th OROM (Reconaissance Squadron or  Escadrille de reconnaissance d’Outre-mer) took daily aerial photographs of Dien Bien Phu. These were provided to Hanoi Headquarters, and dropped at Dien Bien Phu. The mosaic showed the ever tightening network that was beginning to strangle the French perimeter.

Along with the trenches, Viet Minh anti-aircraft guns were closing in. The 37-mm guns were the main threat, with effective fire to 2600 meters altitude. But, many other guns such as the 12.7-mm DShK and some 20-mm guns were prevalent. The artillery, particularly on the west, had clear line-of-sight to the Dien Bien Phu airfield. Many aircraft had been destroyed there already.

Airfield landings at Dien Bien Phu and Isabelle were almost completely stopped, except for emergency evacuations, and even those were being fired at. Resupply by C-47s was completely done by parachute drop. With heavier enemy AA, the Hanoi Air Transport Commander, Col. Nicot increased the parachute drop altitudes from 770 meters to 1980 meters. This is still within range of the 37-mm guns, but was much safer. With higher altitude drops, the parachutes drifted more, and more supplies fell into Viet Minh hands.

The supply situation was worsening as a result, and the command was getting desperate. De Castries called in Bruno to plan a limited raid against Communist flak near Ban Ong Pet, about 2.5 km west of Claudine. (Whether this was de Castries’ or Hanoi’s initiative is not known.)

De Castries bantered: “My little Bruno, you will have to go out and get me that Viet flak out west.”

The attack was to occur the very next day, which gave Bruno little time to organize the attack forces, arrange artillery, and conduct briefings.

Bruno had a knack for coordinating forces. His radio skills were particularly good, with his knowledge of frequencies, and overcoming difficulties with static. He also cultivated good relations with all commanders to get their cooperation. 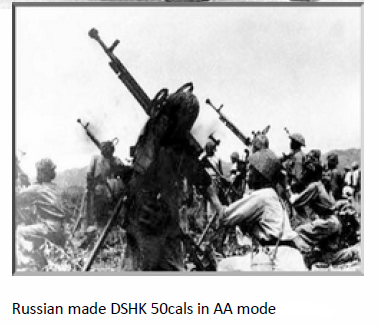 The Viet Minh were probably surprised by the attack, 28 March. The dawn raid was successful at taking out some 12.7-mm and 20-mm guns. The French paratroopers hit and then ran after destroying AA guns, and did not try to hold ground.

The CSVN scenario DBP#4 Bruno’s FlaK Raid simulates this battle. One new innovative feature used is variable objectives at Ban Ong Pet and Ban Ban. The French get credit for each turn they occupy the objective hexes, and don’t have to hold them to the game end to get the points.

The first four turns are night, the rest day. This gives the French time to approach Viet Minh lines unseen. The M24 Chaffee tanks of the 3/1 RCC squadron also can play a role in the fight.

Beatrice and Gabrielle fell, and the Thais abandoned Anne-Marie by 18 March. French supply problems turned from bad to worse, as artillery crowned all the heights around the valley, and Viet Minh 37mm  anti-aircraft guns now could fire directly onto the airfield. A crisis of command resulted in GONO reorganization. Col CdC knew the  fortress was going to die in logistical shambles, if they did not silence enemy AA fire. He tasked BRUNO, his “officier d’interventions,” to plan a raid to take out FlaK guns to the west of Claudine. Two parachute battalions, 6e BPC and 8e BPC would jump off at 0530, and attack toward Ban Ong Pet and Ban Ban. The 1st and 3rd tank platoons of the 1er RCC were in support. Plentiful artillery including twelve 105s fired a massive rolling barrage at 0600. Although the 6e BPC was pinned down at Ban Ong Pet, the tanks slammed into the Viet southern flank. By 1500, the melee was over and Viet troops were retreating in disorder. They left five 20mm Flak guns, a dozen DShK 12.7mm guns, and numerous other small arms laying in the field. 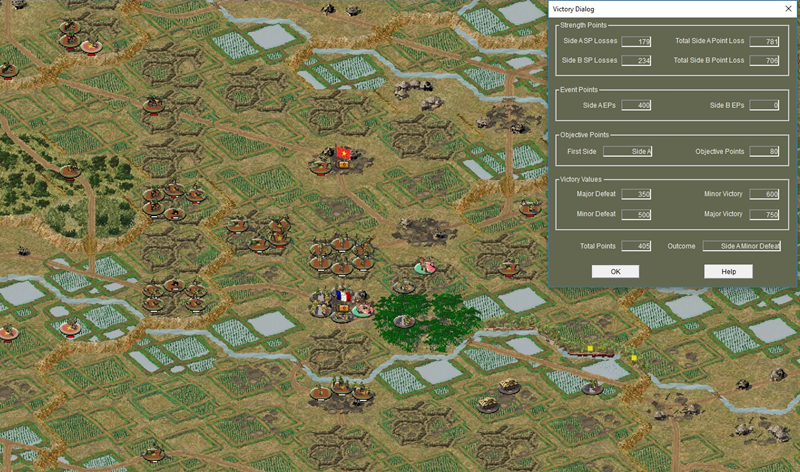 Slowly, the Viet Minh presence increased at Ban Kho Lai and Ban Nhong Nai on Route 41 between Isabelle and the main fortress. On 20 March, a French convoy suffered five dead and wounded in passing through. 2nd Lieutenant Alain Gambiez was wounded. He was the son of Gen. Gambiez, who was Navarre’s chief of staff.

Similarly on 21 March, Legionnaires had problems getting through, and it required two tank platoons to get through at 1655, instead of the usual midday passing.

De Castries decided to stay on the offensive as long as possible and attempt a major venture. A task force of 1BEP under Capt. Vieulles supported by a small detachment of grounded air force, and with tanks and Algerians from Isabelle, attempted to clear the Ban Kho Lai roadblock.

The Viet Minh 57th Regiment of the 304th Division defended the roadblock. On 22 March, the French attack began at 0730. Although smooth at first, the French soon encountered trenches that had not been seen previously. This caused them to request Algerians of the 2/1 RTA to attack from Isabelle.

The Viet Minh held onto the roadblock at all costs, but their losses were heavy. One company had only nine survivors. But, they inflicted high casualties on the French including 151 dead, 72 wounded, and one missing. This included three Foreign Legion paratroop lieutenants killed.

The CSVN scenario DBP#5 Breakthrough to Isabelle simulates this battle of the roadblock at Ban Kho Lai. It is a typical “highway clearing” operation. The French get 6 airstrikes, Grumman F8F Bearcats, from the 1/22 Fighter Group “Saintonge.”

As the Viet Minh began encircling Dien Bien Phu, more and more trenches appeared before French lines. Slowly, since 19 March, the roadblock at Ban Kho Lai and Ban Nong Nhai became tighter. Daily supply convoys between Isabelle and the main fortress had increasing trouble, hacking their way through Communist ambushes as they brought in wounded, and picked up supplies. On 20 March, the French convoy broke through with only a minor skirmish, but it cost five dead, two missing, and five wounded, including 2nd Lt AG, the son of General G, CEFEO chief of staff. So, a task force was formed to clear the way. The Foreign Legion 1e BEP would form the nucleus, with Capt V leading. Tanks of the 3/1 RCC squadron would join in the foray. After aircraft of the 1/22 Saintonge squadron were grounded, flight and mechanic crews formed an infantry detachment, which joined the effort. The mop-up operation began at 0730, 22 March in a heavy fog. At first, it proceeded smoothly, but as leading elements approached Ban Kho Lai, the strangulation tactics, and trench networks employed by the Viet Minh 57th Regiment became more apparent. The 2/1 RTA, (Algerian Rifles) stationed at  Isabelle were called to join the attack, along with the 3rd tank platoon also stationed there. The Viets fought to the last ditch, but a breakthrough finally succeeded at 1200. 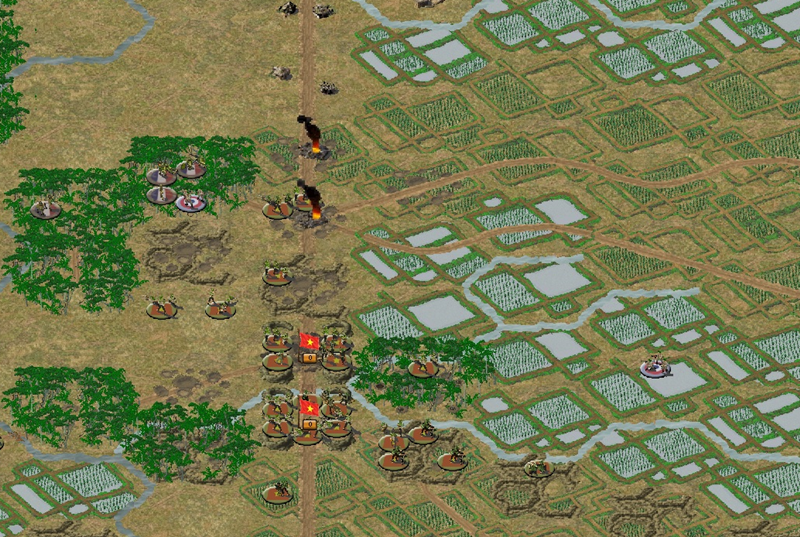 Screenshot of DBP#5 Breakthrough to Isabelle 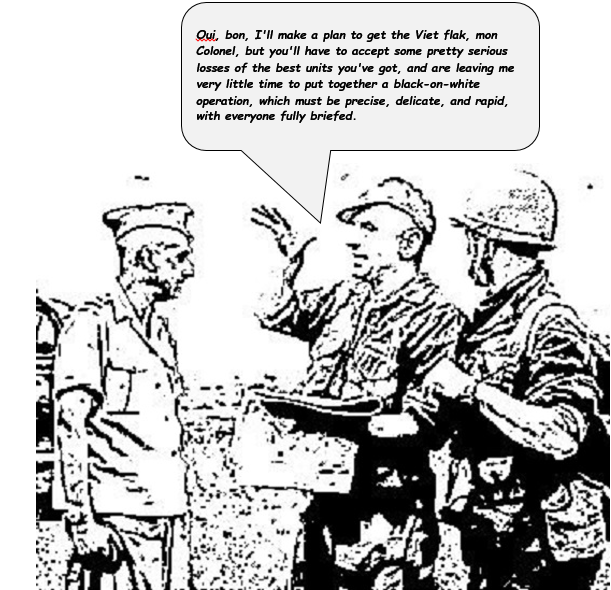