Welcome to our final issue of articles discussing CSEE prior to our release of CS: Vietnam 1948-1967.

In part one, we discussed events in general. In part two, we then continued on how to access Adaptive AI parameter database dynamically, in the middle of a scenario.

Today, it is time to talk about scenario design with CSEE.

Warning: playing the war in Vietnam against what often is quite an asymmetrical enemy will be different. Managing to occupy a nice little rice paddy with an objective flag on top of it might not actually accomplish much. Instead, one needs to stay alert to events taking place during game play, often thinking of objectives beyond what mission briefings told you.

I will use a Vietnamese Civil War scenario covering Operation Chopper to walk you through some of the tools available for scenario design with Vietnam 1.0. NOTE: To be made available in a future Middle East 3.0 UPDATE as well.

Here’s the scenario briefing, much the same as they ever were. Historical. To the point. Worth a read, absolutely. 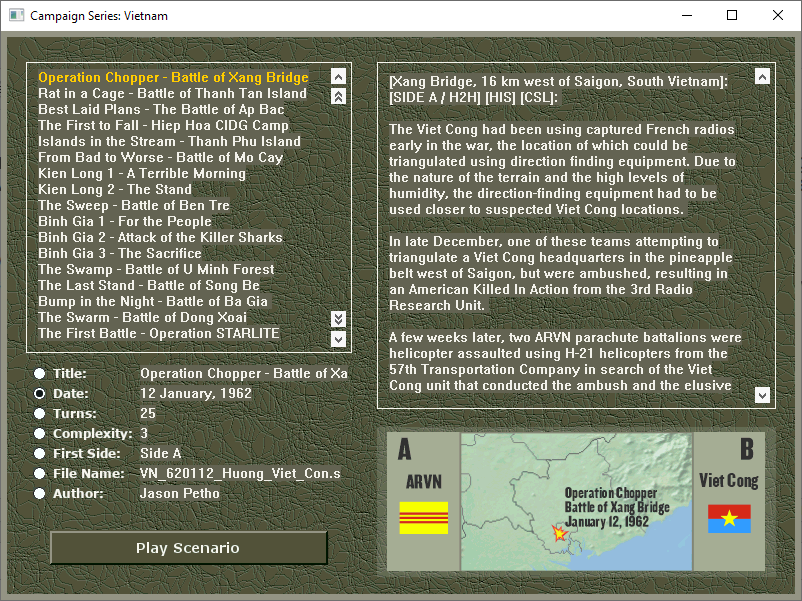 So, ARVN vs Viet Cong from the era of Vietnamese Civil War, before the US involvement, right? 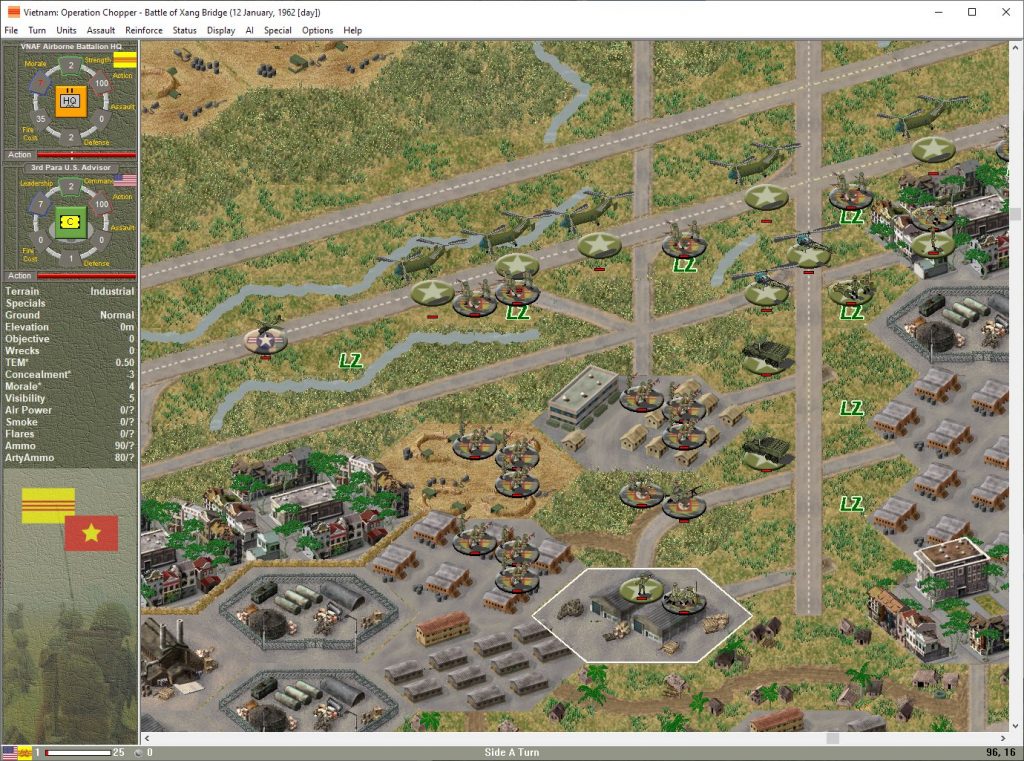 Just look at that: US military advisors, transport helicopters, air recon assets such as Birddog, light recon helicopters too!

And it is 1962, so how come the US public does not know about this!

WIth scenario setting as such, let us look at our Mission Briefing first. Mission Briefings are automatically shown on Turn 1 for both sides, each with their specific briefing. They can also be accessed later via the game menu. Typically, you end up studying them several times when playing a scenario for the first time.

Here is the ARVN player briefing for Operation Chopper:

SITUATION: ARVN forces are to root out any Viet Cong west of Saigon. This is the first time that American helicopters will be assigned for such an operation!

Friendly Forces: The 3rd and 5th Parachute Battalions are available for this mission.

Enemy Forces: A VC unit of unknown size is likely defending the area.

EXECUTION: Use the American helicopters to perform airmobile assaults in the area of operations. Once the landing zones are secured, search the entire area.

NOTE: It is essential to keep the losses of American helicopters to a minimum, as the press is watching!

POLITICAL: You lose Event Points for indirect firing or ordering airstrikes on inhabited hexes (village, city, suburb), whether or not occupied by the enemy.

ADMIN: The supply levels are high at the beginning of the scenario, but expect them to taper off as the operation proceeds.

COMMAND AND CONTROL: Weather during the day will be mostly clear with visibility lightly varying as the operation unfolds.

In CS: Vietnam it is vital you consider your brief in detail.

What was said? What was perhaps not said? Were there hints and tips that perhaps looked a bit out of place, or stood out?

Let us now look at how CSEE brings a whole new ballgame to scenario designers toolbox.

Operation Chopper has its Victory Conditions set as:

There must be some juicy objectives out there, then; 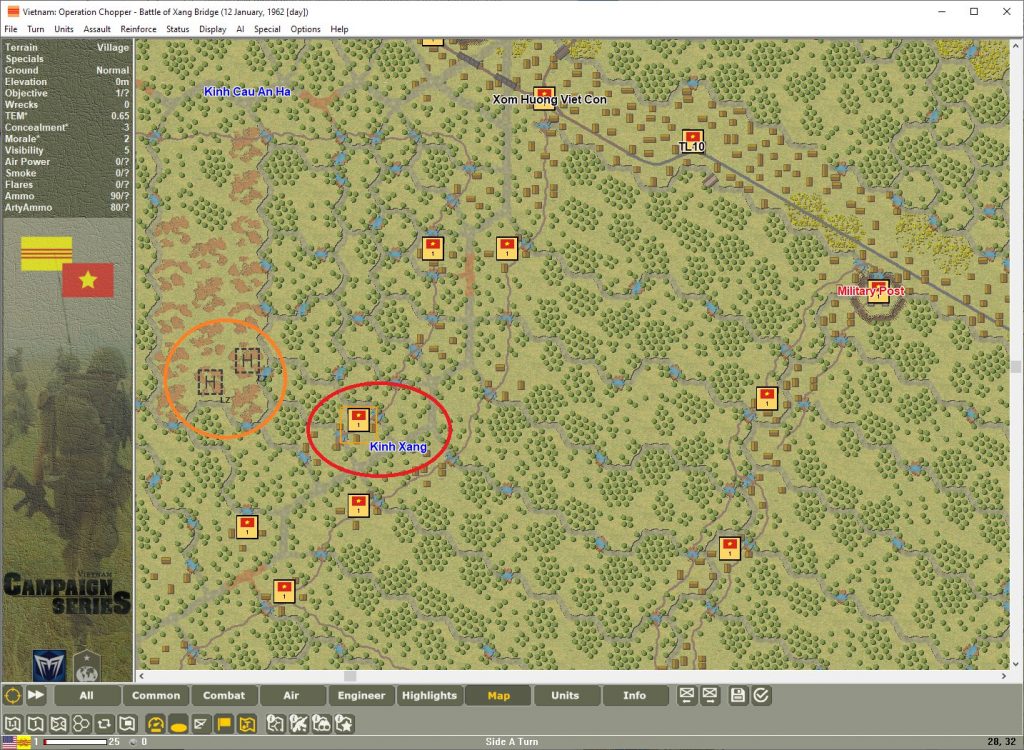 One victory point Objectives – What gives?

Let us look at our briefing again, especially:

This being CS: Vietnam, perhaps do not worry about capturing a single Objective, maybe it is about capturing them all, securing the area, and being rewarded a hefty Event Points award for that?

Let us look at CSEE Lua code that deals with Objectives:

function on_objective_capture (hc, value, values, side) — DO NOT REMOVE

Indeed some of those objectives, third one on objectives list in this case, are worth more than the others. Just that you don’t know which ones. And there’s more…

The map here is divided into areas, and once you are able to secure all the objectives there, there’s an extra reward! Be certain that there are similar bonuses for Viet Cong side for preventing you to do that, though…

Lesson learnt: Objectives are often not what they first appear in CS: Vietnam

Negative points are a new normal, too

This would not be Vietnam if things were this rosy, right. Any hints for disasters looming out there? Let us look at the Mission Briefing again.

How about this line here:

EXECUTION: Use the American helicopters to perform airmobile assaults in the area of operations. Once the landing zones are secured, search the entire area.

NOTE: It is essential to keep the losses of American helicopters to a minimum, as the press is watching!

Essential to not have any US casualties here? Hints and tips don’t often come as clear as day in CS: Vietnam.

Looking at CH-21 Shawnee stats with Unit Handbook, it is clear these are important assets. A squadron of four CH-21s, each worth 10 points, for a total of 40 points! Now that would be a painful loss indeed.

It does not stop there though, in this scenario, nor in many others, in different ways. In this particular scenario US losses are simply not allowed. It is 1962. remember.

Let us look at CSEE Lua code when unit takes a hit:

For each individual transport lost, in addition to 10 point loss per unit data, there’s an additional 50 Event Points given to Viet Cong side. Remember those landing zones? You better hope, or ensure even, they are secure. One ambush, wiping out one squadron, that is 4 * 10 unit points and 4 * 50 event points lost. -240 points lost at one Landing zone disaster. And the units being transported are lost too, they add up too.

Oh, there was this too (and other little things as well, I don’t want to completely spoil this neat little scenario!):

POLITICAL: You lose Event Points for indirect firing or ordering airstrikes on inhabited hexes (village, city, suburb), whether or not occupied by the enemy.

Compare to this code snippet in scenario CSEE Lua file:

Tut tut! And, loss of points, too! And, maybe, not every scenario will be this lenient towards you?

Sh*t will happen in CS: Vietnam. As it maybe should. This is Vietnam War, after all.

Holding ground will not be enough, I need to have boots on ground looking for Viet Cong assets as well. But once I have located them the scenario will become so much easier to play. CSEE to rescue.

I can quickly think of two ways having a Headquarters be as elusive as possible.

No two games of same scenario will be alike. Replayability.

As a scenario designer, don’t just think at tactical level though. An often repeated neat trick for replayability factor is to first have a few operation plans available for the AI side, then randomly pick one, per a die roll, upon start.

I hope we have managed to brief not only how to use CSEE in scenario design, but also how to approach CS: Vietnam game as well.

It will be quite a different experience to previous scenarios and situations within the Campaign Series. The enemy will often prove to be a cunning and devious opponent, and at times, one slip or mishap might lose a battle. Try, try again, as sometimes there just aren’t enough leeway to recover within the duration of scenario play per turns and objectives, event points, available.

How was my Operation Chopper, then? Quite a disaster at first go. I lost too many transports in particular, in just two incidents during the whole of 25 turns. I was not being careless either, just that sh*t happened, twice even. No way back for me.

But it was fun. Let me try it one more time… that will teach them! 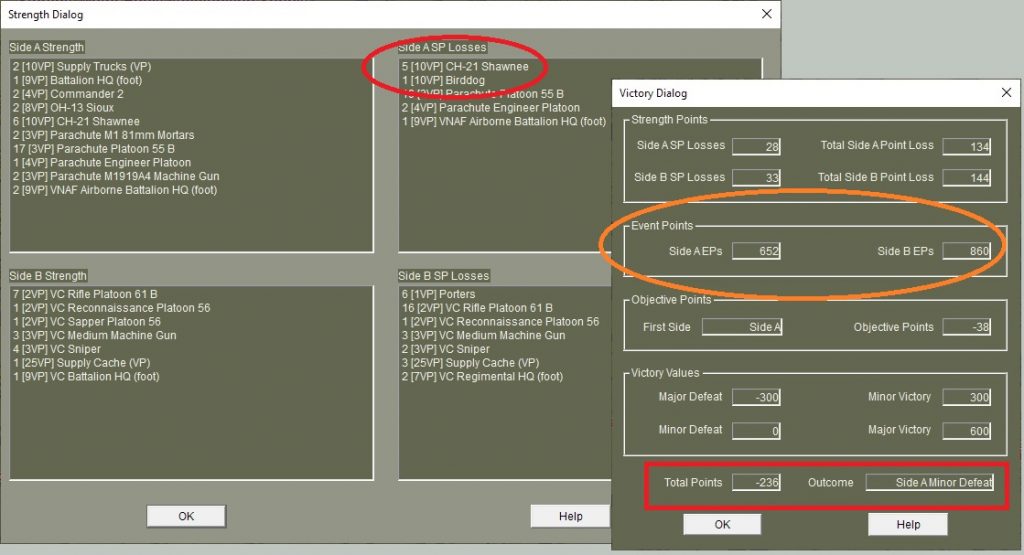 Note the US casualties here – just unacceptable. Also note the orange circle: this scenario will be decided upon events that take place during the battle. Kill ratio and the points earned there, nor the Objective points held won’t decide the winner here.

So will it be in many of the CS: Vietnam scenarios. We hope you will find them refreshing in as how many of the battles were decided in other games from the series. If you find an interesting scenario “unwinnable”, maybe: try, try again.

Thank you for reading this far. Until next time!