Were you aware that NVA soldiers sometimes wore sandals fashioned from discarded truck tires? Well, these were known as “Ho Chi Minh” sandals. It illustrates the “Spartan” nature of their equipment. But, make no mistake; the “bo doi” were equipped well enough with weapons and ammunition. And, their resourcefulness and initiative compensated well for any lack of extravagance.

The typical NVA soldier’s equipment was light, practical, and functional. Their uniforms were mostly North Vietnamese or Chinese made. Webbed ammunition belts were likewise, but some of these items were Eastern European or Soviet. Sometimes worn equipment was replaced with captured ARVN or US ones.

Uniforms were dark green cotton shirt and trousers. However, khaki was also used, particularly by the officers and political commissars. Belts were simple light-green webbing with five-point stars embossed on a nickel-plated brass or steel buckles. Collar insignia indicated rank, although this was usually discarded in South Vietnam.

The “sun” or “pith” helmet” was one item actually produced in North Vietnam. These helmets were made of “phenolic,” a synthetic material of resin-impregnated cardboard. An outer cloth layer was permanently bonded to the helmet. The hats protected against sun and rain, but were not bullet-proof. Sometimes, camouflage nets or plastic rainproof covers were worn on these. Other headgear included the French style “bush” hat.

The usual footwear was a “jungle shoe” similar to French Pataugas jungle boots. They were made like tennis shoes, with light green, tan or black canvas uppers, and a black rubber sole and toe cap. Most Vietnamese grew up barefoot or wearing sandals, so Ho Chi Minh sandals were common.

In the early war years,  troops used the Soviet SKS semi-automatic carbine. The caliber was 7.62mm, and it had a ten-round magazine. Later, the Soviet AK-47 assault rifle became predominant. It used the same ammunition as the SKS, and had a 30-round magazine. It could be used in the fully automatic mode, and had a pistol grip. Made of low-precision stamped parts, the gun was still highly reliable, and could fire even after immersion in water or mud. The AK-47 gave the NVA soldier an edge over Allied forces using 5.56-mm M16A1 rifles. 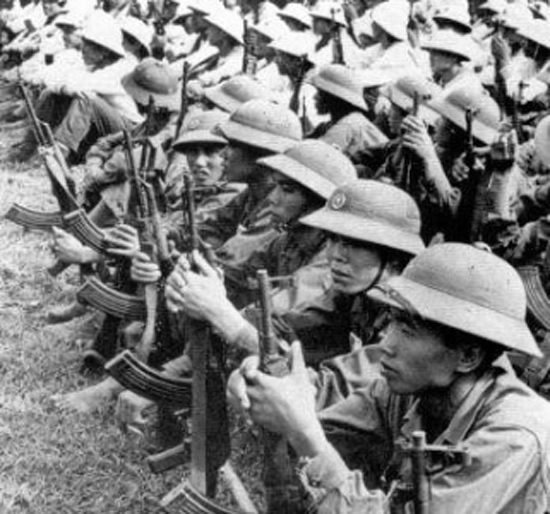 The rucksacks carried only essential items. These included one spare uniform and underwear. Sometimes a spare pair of Ho Chi Minh sandals were carried. A toiletry kit included toothbrush and paste, with soap. A raincoat (Poncho) that could also be used as a ground sheet, along with a mosquito net were their shelter items. Cigarettes and Zippo lighter were usually included, as most troops smoked. Curiously, each soldier was required to have a copy of Mao Tse Tung’s Little Red Book. Was this really an essential item? Given the political emphasis of the Communist Party, yes it was! 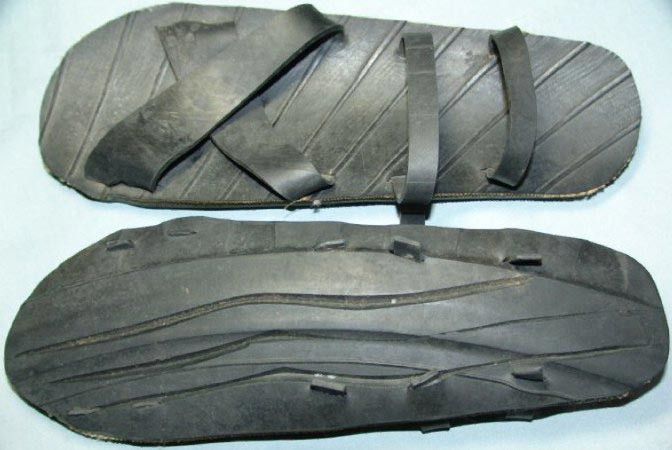 Rifle companies had three rifle platoons plus a weapons section or platoon.  There was no standard allocation of weapons. Rifle platoons had had three squads, each with a 7.62mm light machine gun, possibly an RPG-2 or 7 (B40, B41) antitank weapon and sometimes a captured M79 grenade launcher. The weapons platoon might have a few 7.62mm SGM machine guns, two to four 60mm mortars, and sometimes 57mm recoilless rifles.

Battalions had three rifle companies plus a combat support company, which included three or four 82mm mortars, an engineer (Dac Cong,) platoon, and a few heavy machine guns such as the DShK 12.7mm anti-aircraft gun. The support company might have some transportation elements like bicycles, or even light trucks.

The regiments had multiple support companies such as recoilless rifle, mortar, anti-aircraft, reconnaissance, transport, and an engineer company. The recoilless rifle company had eight to twelve 75mm guns, that were either Soviet (73mm,) US, or Chinese. Sometimes 57mm guns were used instead.

The mortar company had six to twelve mortars, usually 107 or 120mm, and sometimes just 82mm ones. These were Chinese or Soviet made.

Transport companies were used porters to to man-pack supplies, or used transport bicycles. Sometimes light trucks were available, like the GAZ-63 or the ZIL-157.

Engineer companies might have up to three platoons. These were not always present, but when available, they were used to build camps, fortifications, and obstacles.

An NVA elite force evolved that were called “sappers.” They were assault commandos. Some regiments raised a sapper company or platoon, called “Bo Doi Dac Cong” or “Dac Cong,”  (translated as “soldiers in special forces.”) Larger sapper units such as battalions were also formed. They were highly organized, well trained and equipped units that carried out special operations.

The term “sapper,” from the French “saper,” means undermining, by digging. It refers to troops digging narrow trenches, or “saps,” toward an enemy forts, providing protected channels for moving men closer for an assault. Alternatively, “sapper” refers more broadly to combat engineers handling construction and demolition.

Ho Chi Minh established requirements for sappers in 1969: “Adoption of sapper tactics must be flexible. Acquaintance must be made with combat techniques. Morale must be stable. Discipline must be strict. Determination to win and destroy the enemy must be strong. Be loyal to the party and the people. Accomplish all missions and overcome any difficulties.”

In South Vietnam, the 429th Sapper Group supervised these units. NVA sapper units were grouped into companies and battalions. Sapper battalions had a headquarters platoon of 15 to 20 men, and three field companies of 60 members each. Every company was divided into three 20-man sections. A section comprised six cells of about three men each. Rounding out the battalion would be a signals platoon of 30 soldiers and a reconnaissance platoon with 30 men.

In addition to the infantry weapons described earlier, sappers used TNT satchel charges, hand grenades, mines, pistols, submachine guns, and flamethrowers. This required additional training, from three to 18 months. Of course, political indoctrination was included, but reconnaissance and observation skills were stressed the most. Map and compass training, combined with identifying defensive positions, guard routines, command centers, fuel depots and ammunition dumps was important. They also were shown camouflage methods, and practiced tiptoeing, duck-walking, crawling, and other techniques to avoid detection when moving. They learned to disable mines, and cut through barbed or concertina wire. There were classes in bomb making, weapons, and close-combat infantry fighting. This training did not take place in North Vietnam, and was instead done in the South with a “hands-on” practical approach.

One of the typical missions was to attack a firebase, such as FSB Cunningham in the A Shau Valley. Before conducting a mission, sappers carried out a thorough reconnaissance. They not only scouted the target from the outside, using sources such as local guerrillas, but also collected intelligence using agents operating from the inside. After reconnaissance was complete, usually over three to seven days, the commander could determine which enemy fighting positions, and other obstacles his men would face. He then planned the attack.

A typical raiding party, without infantry support, would be organized into four elements: security, assault, fire support and reserve. The security team consisted of a reinforced cell (four men), armed with at least one RPG launcher, AK-47s and several mines to stop enemy reinforcements from reaching the battlefield.

The key component of the raiding party was the assault element, two or more teams called “arrows.” Moving along a specified route, each arrow traveled with three cells, contingents for penetration, assault and direct-fire support. The penetration cell had four members, usually wearing only shorts and a coat of mud, who carried AK-47s, wire cutters, bamboo poles to lift up barbed wire, bangalore torpedoes, and probing tools such as metal stakes, knives, and bayonets.

The assault cells, hauling most of the demolition material, employed five men arned with AK-47s, RPGs, anti-tank grenades and scores of explosive charges. Often more than one assault cell was used in an operation. The direct-fire support cell, made up of two or three soldiers, brought RPGs and AK-47s to the assault. The indirect-fire crew, using mortars and AK-47s, masked raiding party noise to  distract attention, and hit enemy reaction forces.

Once inside, sappers moved rapidly. They placed demolition charges, threw satchel charges, and grenades, and fired RPGs to inflict casualties, suppress enemy resistance, and keep the garrison’s troops pinned down. After assignment completion, or if they could not overcome enemy opposition, the raiding party withdrew, covered by the direct-fire support and reserve sections. They moved back to a rally point.

I imagine General Giap had great affection for infantrymen, and certainly the sappers. Even before, in the battle of Dien Bien Phu, sappers had proven their worth. 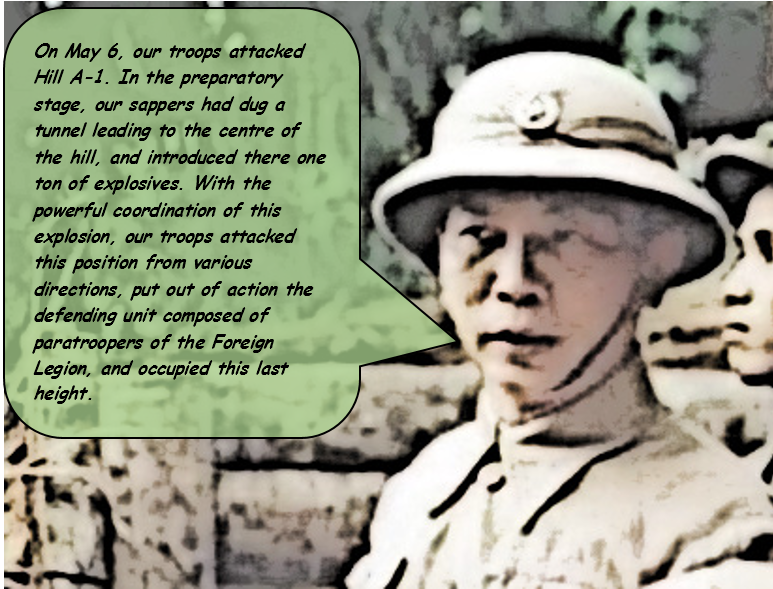