Can you guess what advantage PAVN artillery had over US firebases? It was the superior range of 130mm guns. Their maximum range was 27.5 km, vs 14.6 km for US M114 155mm howitzers.

This was evident in some battles, like Lam Son 719, where the 130mm guns were immune from counterbattery fire while they hammered ARVN firebases. This article explains in more detail the artillery in the Peoples Army of Vietnam.

Artillery Organization in the NVA

The battalion was the basic artillery unit. Each battalion had 12 guns of all the same type or calibre.

(Three batteries of 4 guns each.) Artillery groups or regiments could be composite, having different battalion types. For example, the 16B Regiment was organised with two 85mm field-gun battalions, and one 122mm howitzer battalion.

Infantry divisions typically had an artillery regiment. In the earlier years, it might be a 85/122 composite or 105/122. In later war years the 122/130 composite was more common. Separate artillery regiments were similar to division ones, except they tended to have higher calibre up to the 152mm howitzers.

During the First Indochina War with France, the Vietminh developed their artillery forces using guns from China, which were captured, from Chiang Kai-Shek’s Army. These were primarily US equipment, such as 75mm pack howitzers, and M101 105mm howitzers. The Viet Minh also had some Japanese artillery, such as Type 94 75mm mountain guns. These were the guns that won the battle of Dien Bien Phu. The 75mm howitzers continued limited use in the 1960s for Laos mountain areas. Pack mules or human porters carried these on rugged mountain trails.

After the 1954 Geneva agreement, the North Vietnamese received greater Soviet and Chinese assistance. New developments in Soviet artillery doctrine were adopted by the NVA. These included the newer D-44 85mm divisional gun, howitzers such as the 122mm, and the M-46 130mm field gun. These became the main guns used by the NVA against the Americans and South Vietnamese between 1958 to 1975. Larger calibres, such as the 152mm howitzer, were also used by the NVA. Some additional information on these follows.

The  D-44 85mm divisional gun was a more powerful upgrade to 76mm field guns. It was developed in late WWII. D-44 design started in 1943 at the design bureau of No.9 factory “Uralmash” and production began in 1944. The barrel was developed from T-34-85 tanks, and could fire 20–25 high-explosive (HE), armour-piercing, and high-explosive antitank (HEAT) projectiles per minute. It has a split trail design with pnuematic tires. The NVA used this for both anti-tank, and for field artillery purposes. The Campaign Series Vietnam game features the  anti-tank version only.

The M-30 122mm howitzer replaced the 105mm as the most numerous divisional artillery piece.

Many divisional artillery regiments had two 122mm battalions. The M-30 was designed by Fyodor Petrov just before World War II, and entered production in 1940. When production ended in 1955, the Soviet Union began sending them to its allies. China also produced the gun, designating it the Type 54. Over 450 M-30s were shipped to North Vietnam, beginning in 1964.

The 122mm howitzer was effective against strong points and troop concentrations. Four types of rounds were used: High Explosive Anti-Tank (HEAT), High Explosive (HE), illumination, and smoke. The 11800-meter range was 10% greater than the US M101 105mm howitzer.

Initially, the towed 152mm howitzer M1943 (D-1) was the NVA’s larger calibre artillery. The Russians had used 152mm calibre since World War I. This particular model was the result of Soviet development for rifle corps in 1942. The design concept combined mobility and high firepower. The Model 1938 barrel was mounted on a 122mm carriage. The D-1 had a 12400-meter range.

In the Soviet Army, the 152mm was used in battalions of motor rifle division artillery regiments, and army level artillery brigades. The NVA tended to use them for independent corps-level artillery groups or regiments. 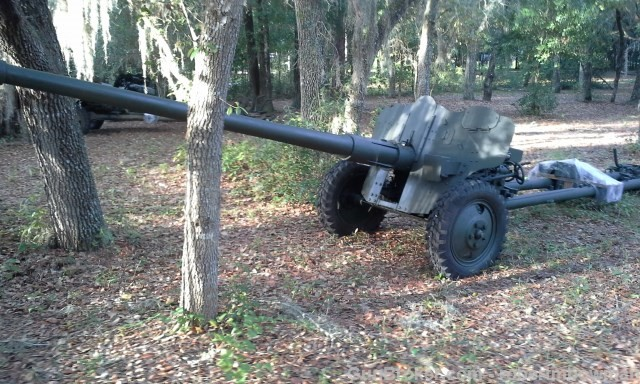 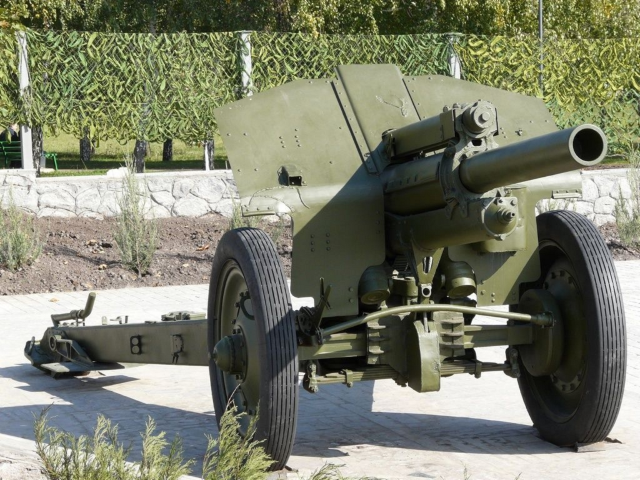 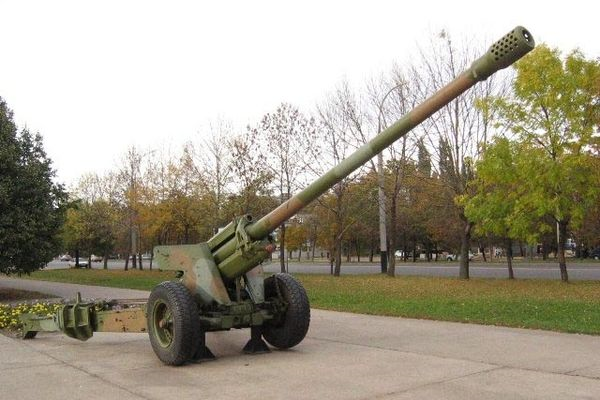 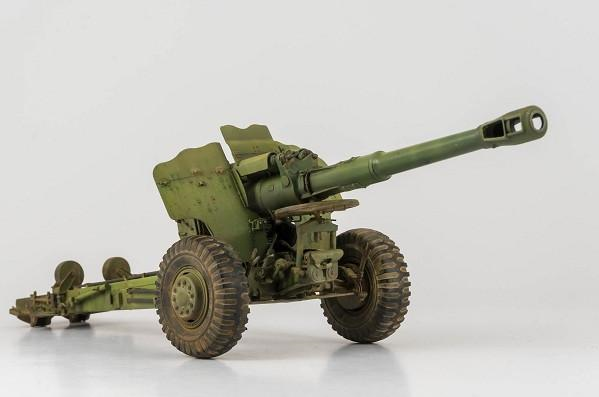 Rocket artillery had been used by the Russians in WWII on a large scale. Rocket launchers, using area fire, were used as weapons of opportunity to break up troop concentrations. The Soviets assigned  rocket battalions, with mobile truck-mounted launchers, to mechanised and armoured divisions. Multiple rocket launchers sacrifice range and accuracy, but deliver a much heavier explosive, in proportion to weight and calibre, than conventional artillery. As Soviet support of the North Vietnamese forces increased, the NVA obtained 140mm (BM-14) multi-round rocket launchers either mounted on trucks, (GAZ-63,) or on split trail carriages.

As US involvement increased, the NVA and VC increased attacks, supported by recoilless rifles and mortars. These had to move quickly after firing in a “shoot and scoot” mode. As they were carried by troops on foot, this limited firepower capability.

The NVA’s need for accurate, effective, support weapons became apparent. Rockets fired from portable launching systems, were the ideal weapon to meet this need. The truck-mounted rockets are obviously very portable, but single launchers could be carried by porters, and had “foot portability” as well. So either way, mobility is maintained, but firepower greatly increased. (Equivalent to 152mm gun-howitzer shells.)

The 140mm rockets were used at first. But later, 122mm rocket systems were developed with greater accuracy. The 122mm rocket trajectory was flight stabilised by “spin.” This spin was imparted  by a spiralled U-shaped channel on the launcher. The channel ran 120 degrees clockwise around the inside of the launcher tube its entire length. The rocket itself had a spin lug which rode in the channel. Further stability was provided by four tail fins. These folded around the motor prior to launch, but extended when the rocket cleared the tube.

Further accuracy for the 122mm rockets was gained by sophisticated instruments for initial site  surveys. A theodolite or transit, mounted on a tripod, determined correct firing data. This survey, in conjunction with the spin/fin guidance system, improved sighting system, and tripod mount provided improved accuracy.

The 122mm (BM-21) 40-round rocket launcher was mounted on a URAL-375 truck. Single launchers were also available. They were foot mobile, highly accurate, and could be broken down into pack loads. These were designated as the DKZ-B rocket artillery launcher.

On 7 March 1967, Soviet 122mm fin-stabilised rockets were fired on Camp Carrol in Quang Tri Province. This was the first use of 122mm rockets in South Vietnam. 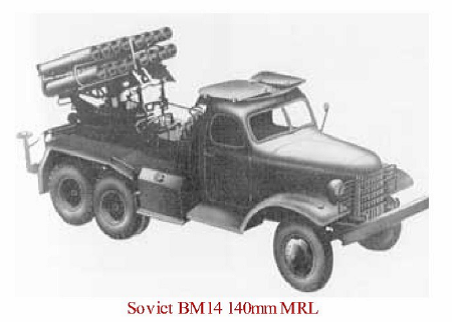 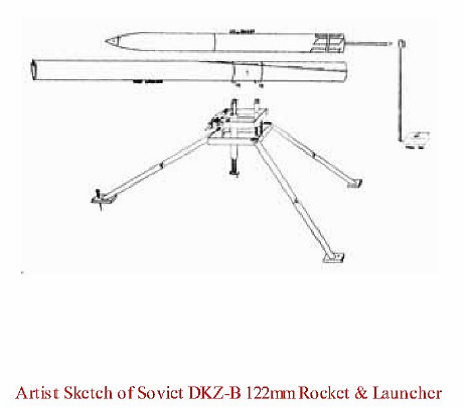 All howitzers and guns listed here have Wikipedia articles. To find them with internet searches, use the calibre and model number as keywords. Keywords example: M1943 (D-1) 152mm howitzer

General Giap had a great appreciation for artillery. The famous victory at Dien Bien Phu could not have been won without the massed guns in hardened concealed emplacements. The NVA would continue to have effective artillery under Giap’s leadership. 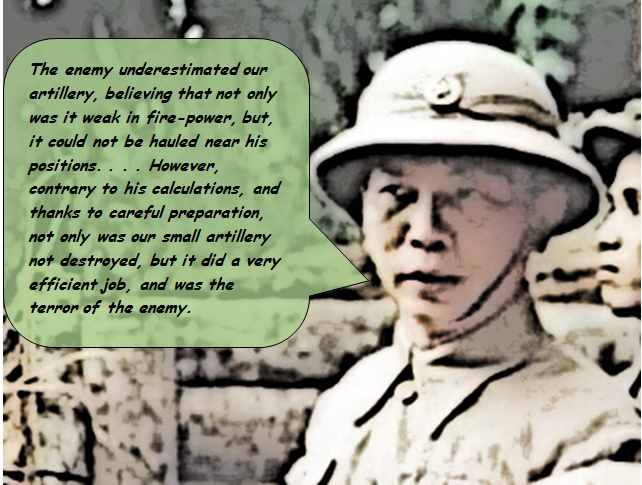