As you probably knew, the NVA had armored units. They were  mostly developmental for several years, but in the late war, became an effective force. This article provides an overview of NVA armored forces.

The NVA army gradually developed its tank and anti-tank capabilities. Starting in 1950, the Viet Minh began a close relationship with Communist China, and some officers studied armored warfare at Wu Ming. They later served as specialists to develop anti-tank tactics, and to create special units. The only counter to French M24 Chaffee tanks were some US bazookas, and 75mm recoilless rifles. Two functioning Chaffees were obtained at the surrender at Dien Bien Phu, providing propaganda value.

NVA armored battalions, or “tieu doan thiet giap,” usually had the same type of tank throughout. Regiments or brigades might have battalions of different types. Battalions could consist of 24 to 36 vehicles. The NVA did not use rigid tables of organization and equipment, (TO&E,) and exceptions were made depending on the situation and available forces.

In 1964, the NVA obtained some PT-76 light amphibious tanks from the Soviet Union. With these, a new battalion was added to the 202nd Tank Regiment.  These were used for reconnaissance and infantry support roles. The amphibious capability was useful in many areas and gave flexibility.

In 1965, the NVA established the Armored Forces Directorate to coordinate armored units, and define doctrine. Use of mass armor was not intended at this time. The main purpose was for infantry support and reconnaissance. Without air superiority, camouflage was very important.

Not until 1967 did these units see combat. A company of PT-76 tanks was sent to Laos. The 198th Battalion had 22 PT-76 tanks, and it was deployed with a BTR-50PK armored personnel carrier (APC) company at Khe Sanh with the Road 9 Front.

Starting in 1961, the NVA began acquiring armored personnel carriers. The BTR-50 and BTR-52 were obtained from China and the Soviet Union. This was kept as secret as possible, and the units were called “bo binh co gioi” or BBCG, for motorized infantry. At first, they were small company sized units, but in 1971, Regiment BBCG 202 was created as a counterpart to the 202 Tank Regiment. Later, China furnished most of the APCs in service with the rugged K-63.

A brigade typically had three tank battalions and an APC battalion with motorized infantry.

Air strikes were the greatest danger to PAVN armor. A number of 37mm and 57mm AA guns, and SA-7 (A-12) missiles were deployed in mobile AA companies to accompany tank formations. In 1972, the 237th AA Artillery Regiment was re-equipped with ZSU-23-4 Shilkas.

The PT-76 light amphibious tank was a Soviet design. The designers were N. Shashmurin and Zh.Y.

The engine was a 240 hp V-6 diesel, and could travel 44 km/h on the road. A three-man crew operated the tank, which was primarily used for reconnaissance and fire support.

When the Germans introduced the Panther in 1943, the Soviets wanted to upgrade the T-34 design to meet the threat. Four design teams competed for Red Army approval. The final design was a hybrid between the best turret and gun designs. Vasiliy Gavrilovich Grabin, an artillery designer, led a design bureau (TsAKB) at Joseph Stalin Factory No. 92 in Gorky, and won the competition for the gun, an 85mm design designated ZiS-S-53. A 23-year old designer, A. Savin, engineered modifications for the gun to fit the new turret design by V. Kerichev. This new tank was the T-34/85, and went into production in spring 1944 at Factory Zavod Nr. 112, Krasnoye Sormovo.

When production ended in 1945, a total of 29430 units had been manufactured. The North Vietnamese obtained second-hand units beginning in 1955, and ultimately 300 were delivered.

The T-34/85 was a considered a medium tank, but could be used in armored combat against relatively tough enemy tanks. It was a good tank, but inferior to the US Patton tank used in Vietnam.

The T-54 was introduced in the years following WWII, and is considered by some as a legend. It has been used more extensively than any other Cold War or modern main battle tank. But, it had quite a tumultuous design history. The first prototype was made at Nizhny Tagil by the end of 1945. However production was paused in 1948, as many quality problems arose. An improved T-54-2 (Ob’yekt 137R) version was designed, with a dome-shaped turret with flat sides. It was inspired by the IS-3 heavy tank. Production resumed in 1949, and in 1951, a second modernization made, designated T-54-3. It featured improved telescopic gunner sights and a smoke generating system.

The T-54B has a crew of four, and is driven by 520 hp, 8-cylinder diesel engine. Top speed was 55 km/h.  The North Vietnamese used T-54s, along with its Chinese-built copy, the Type 59 extensively against ARVN forces.

The Chinese Type 63 (Designation YW531,) was an armoured personnel carrier, entering service in the late 1960s. The  Yong Ding Machinery Factory (Norinco Co.) designed and built these. The welded steel hull protected up to 15 troops against small arms fire. A Type 54 12.7 mm machine gun was mounted on top. The driver sat in the front left, and used two periscopes to steer. The carrier was powered by an 8-cylinder, air-cooled, turbocharged, diesel engine KHD BF8L 413F, developing 320 hp. Top road speed was 65 km/h. 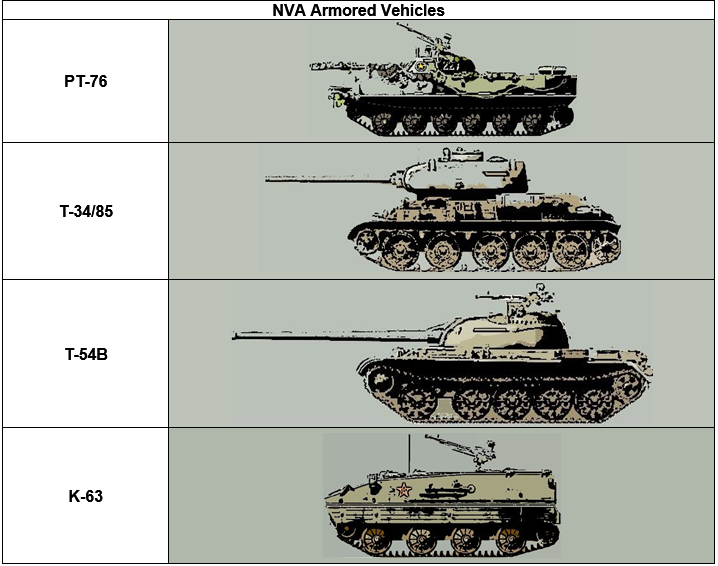 In  January 1968, 3rd Company PT-76s of the 198th Armored Battalion supported the 24th Infantry Regiment in an attack on the Ta May outpost. The ARVN garrison was overwhelmed in this first combat with NVA armored forces.

In February 1968, 16 PT-76s attacked Lang Vei, held by over 500 US troops, in the first US vs NVA armor engagement. Despite stubborn resistance, the PT-76s advanced, destroying bunkers at close range. The defenders held on, as their artillery fire and air strikes struck back. Finally, the few survivors broke out, fleeing to Khe Sanh. The North Vietnamese lost six PT-76s.

After Khe Sanh, the 198th Armored Battalion was re-deployed near the DMZ. A PT-76 was surprised while crossing the Ben Hai river when US Marine M-48s destroyed it at long range.

Then in March 1969, the 4th Armored Battalion, 202nd Regiment attacked the Ben Het US Special Forces camp. A dozen PT-76s and equal number of BTR-50PK APCs intended to destroy the camp’s M-107 SP gun battery. The lead PT-76s hit a mine and stopped, but continued to fire. Other armored vehicles engaged a platoon of M-48 Pattons from the US 1st Battalion, 69th Armor. The North Vietnamese decided to retreat after losing two PT-76s and one BTR-50PK. These were the only occasions that American tanks clashed with NVA armor.

During the ARVN Operation Lam Son 719, The 202nd Armored Regiment reinforced the PAVN 70B Army Corps with two additional tank battalions equipped with T-54 tanks. On 19 February 1971, the NVA assault against the LZ 31 was repulsed with heavy losses. The ARVN M-41s proved to be superior in tank-versus-tank fighting. A week later, after several assaults, three T-54s finally gained the summit of the position, forcing the defenders to withdraw.

In May 1972, PAVN tried once more to take An Loc. They launched an assault supported by 40 tanks. B52 strikes, fighter bombers and Cobra helicopters hit the attackers. On 12 May, T-54s reached the northern and eastern parts of the city, and direct fired from entrenched positions. But, on 12 June, the last NVA tanks were driven from An Loc. Nearly 40 tanks were lost.

After US withdrawal, the PAVN armor became more powerful against ARVN. By April 1975, the 202nd Armored Brigade pressed hard on Saigon. The day Saigon was taken, 400 tanks and APCs moved against the last ARVN defensive positions.

All armored vehicles discussed have Wikipedia articles for more information. In addition, the internet Tank Encyclopedia is a good resource. 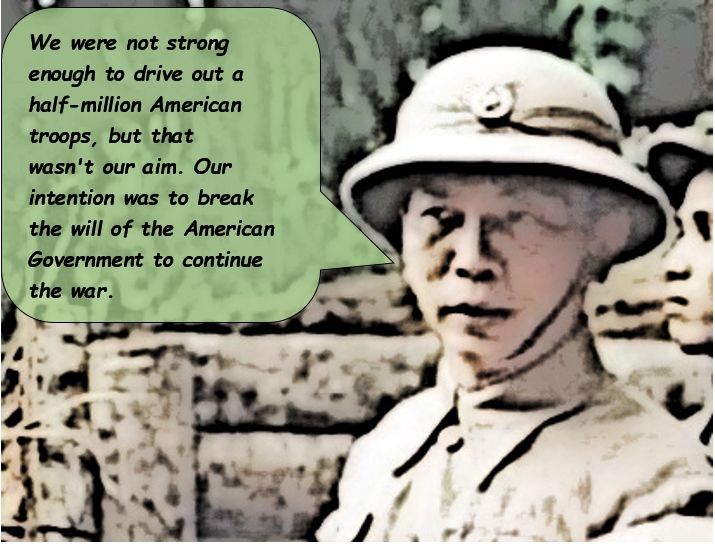