This new series covers the Day River Campaign of 1951 in Indochina. This first issue gives the political and miltary strategic situation and how that motivated subsequent actions by the Viet Minh.

The Day River Campaign was a Viet Minh offensive at Phu Ly, Ninh Binh, and Yen Cu Ha between 29 May to 18 June 1951. These towns were along the Day River (Song Day,) and were part of the French defensive line, known as the “de Lattre Line.” The Viet Minh called this the “Henan Ninh Campaign,” and their military operation codename was Operation “Ha Nam Ninh,” also known as “Quang Trung.”

The Viet Minh attacked Phu Ly and Ninh Binh, but French Groupement Mobiles, Naval Assault units,  paratrooper battalions, and commandos retook these quickly. A further push down south toward the Phat Diem Catholic Bishopric ended in a major defeat at Yen Cu Ha. The Viet Minh withdrew back into the western limestone hills and karsts. However, General Vo Nguyen Giap learned some valuable lessons about French capabilities and tactics that were helpful later. 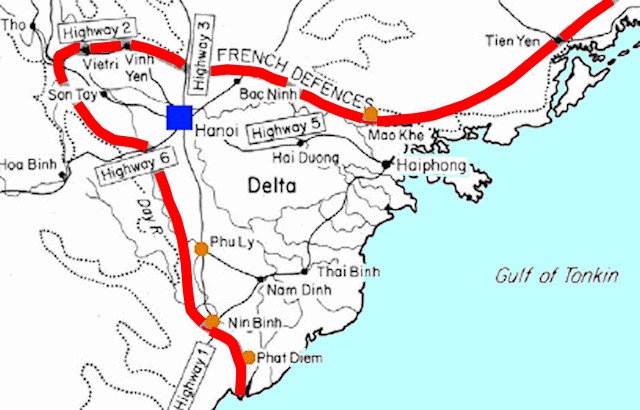 In the French Indochina War, the Viet Minh took the border forts and Cao Bang in late 1950. The French lost control of Tonkin north of the Red River, and by 1 January, 1951 they desperately dug in to hold the Red River delta. The Viet Minh were encouraged to go on the offensive.

However, Viet Minh attacks failed at Vinh Yen and Mao Khe. General Giap still wanted to make some progress. He knew that the large Catholic areas around Phat Diem and Bui Chu were not completely loyal to the French. Although these areas had formed Catholic Militias to guard the defensive line, these forces were known to be weak. General Giap and the Party Committee decided to attack in this area with hopes to control the Phat Diem area and perhaps later try for Bui Chu.

Bishop Le Huu Tu was a very influential priest that opposed both Communism and French colonialism. He tried hard to keep the Phat Diem Diocese out of the war, but had a militia numbering 6000 in 1951. Le Huu Tu eventually agreed to work with the emerging Vietnamese state led by the former emperor, Bao Dai. However, Catholic hostility to French colonialism remained.

Operation Ha Nam Ninh was quite simple. Initially, Viet Minh Division 304 was to attack Phu Ly, and Division 308 against Ninh Binh, in order to pin down French reserves. And then, the 320th Division, by rapid thrusts to the east and south, would wipe out the line of weak French posts between Ninh Binh and the sea. They would reoccupy the Catholic bishopric of Phat Diem, thus partially dismantling French contorl in the southern Red River delta. This would deal a psychological blow to the anti-Communist Vietnamese Catholics.

The 9th Regiment of the 304th Division attacked in the area of Phu Ly on 29 May 1951. Colonel Fernand Gambiez dispatched Groupment Mobile No.4 (GM 4) and the 2nd Colonial Parachute Battalion (2BPC) to bolster defenses there. The Viet Minh destroyed some key bridges, and blocked roads to inhibit French movement. But, their attacks were countered by French forces. However, this did pin down French reserves in Phu Ly.

At Ninh Binh, the Viet Minh 79th Battalion, 102nd Regiment attacked on the night of 29 May 1951. They overran the Catholic church, where Commando Francois was defending. The French sent an intervention force composed of an armored squadron of the 1st Regiment Chasseurs Cheval (1RCC), and a battalion of Vietnamese reinforcements. This stabilized the situation, preventing complete takeover of Ninh Binh.

In addition, a high limestone crag was being defended by Catholic Militia, and reinforced by the armored infantry from the squadron. This position was barraged by mortars and the commanding officer, Lt. Bernard de Lattre was killed. He was the son of General de Lattre. The Viet Minh took this position.

The following day, Groupement Mobile No. 1 (GM 1) was deployed, and they retook Ninh Binh, and the high crag overlooking it. The Viet Minh occupiers retreated into the limestone hills.

Also on 30 May, 7th Colonial Parachute Battalion parachuted into an area southeast of Ninh Binh, near an old post of Yen Phuc. They encountered battalion strength Viet Minh forces advancing along Route 10 to the southeast. In the ensuing firefight, paratroopers  inflicted heavy losses and thwarted, by a series of counter-attacks, an encirclement maneuver.

A few days later, the Viet Minh 36th Regiment advanced along the same Route 10 and encountered French paratroops and Algerians at Yen Phuc. This operation managed to destroy a few LCMs on the river, but were thwarted by the poste at Yen Phuc.

The 320th Division advanced from an area far south of Ninh Binh, toward Yen Cu Ha. They made some progress, but encountered resistance along the way, and never accomplished the objective of Phat Diem.

Finally, in an attempt to rekindle the drive, on 5 June the Viet Minh 88th Regiment attacked Yen Cu Ha, a key strongpoint along the Day River and Route 10. This poste had been defended by Catholic Militia and Hung Yen partisans, but was reinforced on the 30 May by Commando 25 “Romary” led by Lt. Michel Romary.

In a night attack, prepared by mortar and SKZ recoilless gunfire, Viet Minh took the outpost, with it exchanging hands four times, and decimated the defenders. Paratroopers of the 13th Company arrived by LCM just in time to salvage the situation, and retake the blockhouse. In addition, elements of the 4th March Battalion of the 7th Algerian Tirailleurs Regiment arrived to reinforce the post, and manage the large numbers of prisoners taken.

After the failure to take Yen Cu Ha, the Viet Minh had heavy losses. Also, Dinassaut and aircraft attacks ravaged their river supply system of small junks and sampans. On June 18, 1951, the battle for the delta ended when the Central Party Committee, (CPC) decided to withdraw. Despite failure to meet objectives, the Viet Minh believed they had inflicted high French losses, gained political strength, and obtained military experience.

The French had prevailed, but their forces were being stretched. While French forces drove off the Viet Minh, these were not conclusive victories in terms of the overall war. 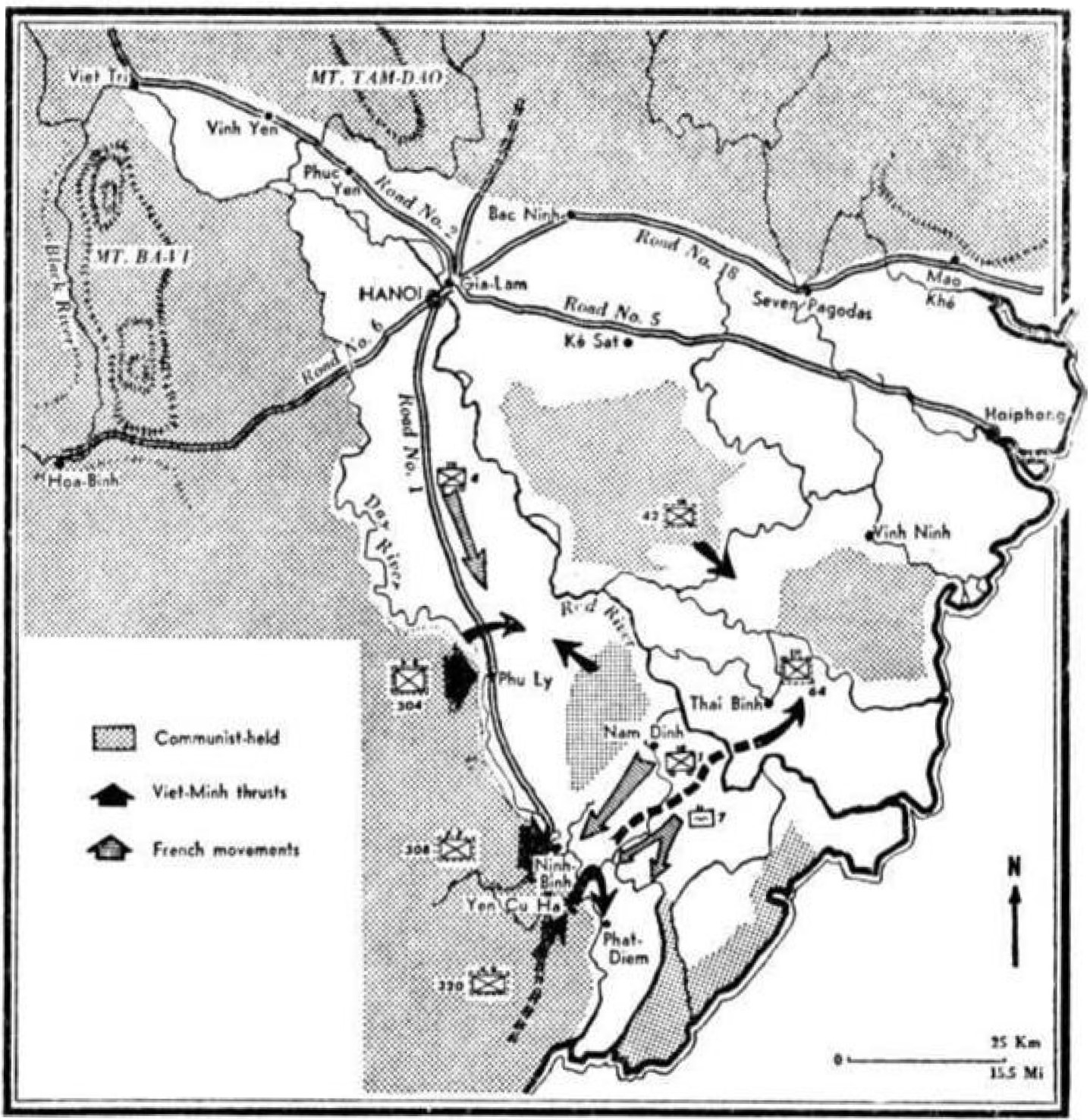 As an officer during World War I, de Latree fought various battles, including Verdun, and was wounded five times, surviving the war with 8 citations, the Legion of Honour and the Military Cross.

Between the World Wars, he served in the Morocco campaigns, where he was wounded again. He then joined general staff headquarters, and later commanded the 5th Infantry Regiment in Coulommiers.

From 1932 to 1935, Lieutenant-Colonel de Lattre worked on General Maxime Weygand’s staff, and then General Georges’ staff. During these three years, de Lattre was assigned to the 3rd office, and was in charge of the “Plan” and “Foreign Relations”.

Until 1937, Colonel de Lattre commanded the 151st Infantry Regiment at Metz. In 1938, he attended the Centre for Higher Military Studies, and afterward was appointed Chief of Staff of the Fifth Army. On March 23, 1939, he was promoted to the rank of brigadier general, and in January 1940, de Lattre took command of the 14th Infantry Division.

During the German invasion in May and June, the 14th division distinguished itself at Rethel, where it repelled three German attacks at the Aisne River.

In September 1941, de Lattre became commander-in-chief of the Tunis troops, and created a new cadre school in Salammbo. Recalled to France in January 1942, he was appointed commander of the 16th Military Division in Montpellier, and promoted to Lieutenant General.

De Lattre refused Vichy Government orders not to fight the Germans, and was the only general willing to oppose the occupiers. He was arrested, but escaped, and defected to Charles de Gaulle’s Free France at the end of 1943.

From 1943 to 1945 he was one of the senior leaders of the Liberation Army, commanding the forces which landed in the South of France on 15 August 1944, then fought to the Rivers Rhine and Danube.

He was the only French general of World War II to command large numbers of American troops, when the US XXI Corps was attached to his First Army during the battle of the Colmar Pocket. He was the French representative at Berlin on 8 May 1945, with Eisenhower, Zhukov and Montgomery.

From 1945 to 1947, de Lattre was Commander-in-Chief of French Forces in Germany.

Finally, in 1950, he commanded the French Far East Expeditionary Corps (CEFEO) during the French Indochina War. He was highly regarded by both his French subordinates and Viet Minh adversaries, often described as the “Gallic version of US General Douglas MacArthur – handsome, stylish, sometimes charming, yet egocentric to the point of megalomania” and “brilliant and vain” and “flamboyant”.

De Lattre revitalized the CEFEO, and stabilized the situation in Tonkin. He established the defensive line around the delta known as the “de Lattre Line.” He also gained greater Vietnamese and indigenous people’s participation in the war effort. His son, Lt. Bernard de Lattre commanded an armored squadron in the 1st Regiment of Chasseurs Cheval. Unfortunately, he was killed near Ninh Binh in the Day River Campaign.

In late 1951, de Lattre was diagnosed with cancer, and he returned to Paris. He died on 11 January 1952. A very large state funeral was held in honor of this beloved General.