French paratroopers played a role in many of the operations in the First Indochina War, and the Day River Campaign was no exception. Both the French Army and the Foreign Legion had parachute battalions by the late 1940s. In particular, the CEFEO had colonial units, that developed along the lines of S.A.S units of WWII.

The post WWII paratroops evolved from Free French organizations during WWII. These were patterned from the British SAS. (Special Air Services) The very first French paratrooper unit was the 1ére Compagnie D’Infanterie DE L’Air (1er C.I.A) It was involved in joint operations with the British SAS under British Lt.-Col. Sterling. Combat operations included Crete and Cyrenaque in 1942.

Later, Commander Bouvier O’Cottere formed the 3rd Air battalion in  Algeria. Similarly, a 4th Air Battalion was formed in England. These units ultimately were enlarged to form the 2nd and 3rd French S.A.S Regiments. They participated in the D-Day Normandy Invasion, parachuting into Bretagne. They later fought in the Rhineland operations in Holland, assisting the 1st Canadian Army.

As the Indochina war arose, some of these battalions were sent to the Far East and with volunteers, eventually formed the 1ère Demi-Brigade de Parachutistes S.A.S. (1DBP-SAS) The commander was Colonel de Bollardiere. The motto was: “Qui ose gagne” which is French for “who dares, wins.”

In 1947, problems of succession and differences in opinion arose, and  a meeting at the 3rd Army Staff Office, in which Col. de Bollardiere participated, a decision was reached to create a parachute commando corps, C.C.P, with a demi-brigade to start. 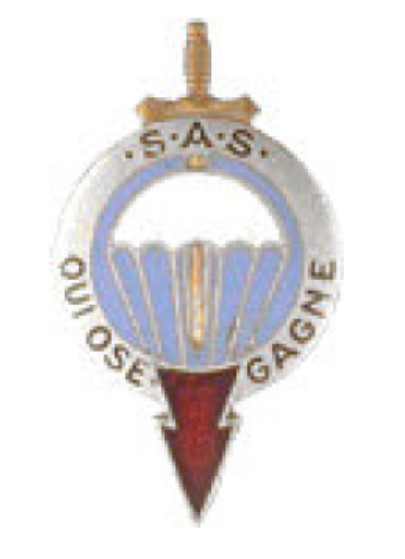 The 1DBP-SAS  was renamed 1ère Demi-Brigade Coloniale de Commandos Parachutistes, (1BCCP) and reorganized in August 1947. It included a staff and command battalion, plus the 5BPIC and two other battalions trained in 1948 from paratroopers returning from Indochina. The headquarters of what was called the “Metropole” location were in the city of Vannes, in Bretagne (Brittany) France. The battalions were rotated between this location, North Africa, and Indochina. A typical Indochina deployment was two years, but this varied.

The battalions of the 1er Demi-Brigade increased in number, and ultimately the following seven battalions were created:

The ordinal designator in French is formally “ère” for the “first,” and “ème” for the “second” and subsequent ordinals. Formally, these are abbreviated as 1ère or 2ème. (superscript form.)  This is because in French, the word “first” is “première,” and “second” is “deuxième.” All remaining ordinal numbers have the “ème” ending. This is generally further abbreviated in military contexts as 1er and 2e, 3e, 4e etc. So these battalions would ultimately be abbreviated as 1erBCP or even 1BPC.  Also 2eBPC could be shortened to 2BPC, etc.  Also, the abbreviation for company is “Cie.” 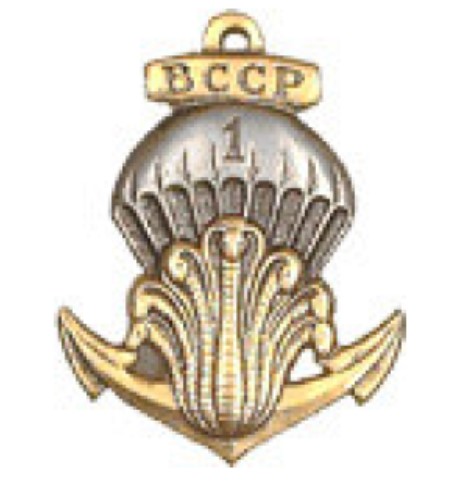 This is the parachute battalion that fought around Ninh Binh and Yen Cu Ha in the Day River Campaign. It was formed in early 1950 under Battalion Chef Fritsch, in Bretagne. After a training period, it embarked on the SS Pasteur for Indochina on 15 July.

On 4 August, they arrived in Haiphong, transferred into Hanoi, and billeted at the Gia-Lam airfield.

The battalion had the 13th and 14th Companies (13e Cie and 14e Cie) with regular Metropolitan paratroopers, and had a Vietnamese company called the 7eC.I.P. The acronym C.I.P means Company, Indochinois, Parachutistes. Eventually, and especially under the de Lattre period, virtually all paratrooper battalions formed one Vietnamese company. For the 7BPC, this C.I.P was formed after they arrived in Indochina on 22 July 1950.

On 18 September, they parachuted into Con-Dung Near Co-Tiet in support of Operation Gregoire. In a few skirmishes, an adjutant was killed, and Lt. Thuchot was wounded. They returned to Hanoi on 27 September 1950.

During the fall 1950 there were two additional operations: Phoque, and Terrestre. These were in the Phu Ly Province. Chef Fritsch was hurt during the intial drop of Operation Phoque and was evacuated. Capitaine Moulie was put in charge of the battalion.

The Day River Campaign action occurred when 7BPC dropped on Yen Phuc on 30 May 1951. This was a village and outpost along Route 10, about 3 km southeast of Ninh Binh. It was part of the de Lattre Line. It was a reconnaissance operation, withuntered a superior enemy, but inflicted heavy losses, and thwarted, by a series of counter-attacks, an encirclement maneuver. The Vietnamese company of the battalion, 7eC.I.P. distinguished themselves in the encounter.

On 5 June, the 13e Cie was transported by Dinassaut “A” on the Day River to Yen Cu Ha, where they reinforced Commando 25, and defended the position against heavy attacks by the Viet Minh 88th Regiment.

The 7BPC remained in Indochina for another year, participating in Operations Mirabelle,Citron, Mandarine, Lotus, Delphine, and Hoa Binh, Micareme, Mabiance, Carrelet, Paquerrette, Lousqsor, Prosper, Kangarou, Antilope, and Sarrique. Finally, on 26 July 1952, the battalion departed Haiphong on the SS Pasteur and returned to Bretagne. 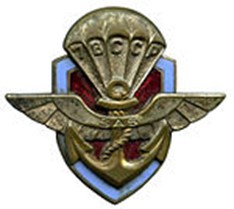 This is a scenario that recreates the 7BPC action at Yen Phuc. This is part of a series of Day River Campaign scenarios. Here is a screenshot of playtest action on Turn 9. 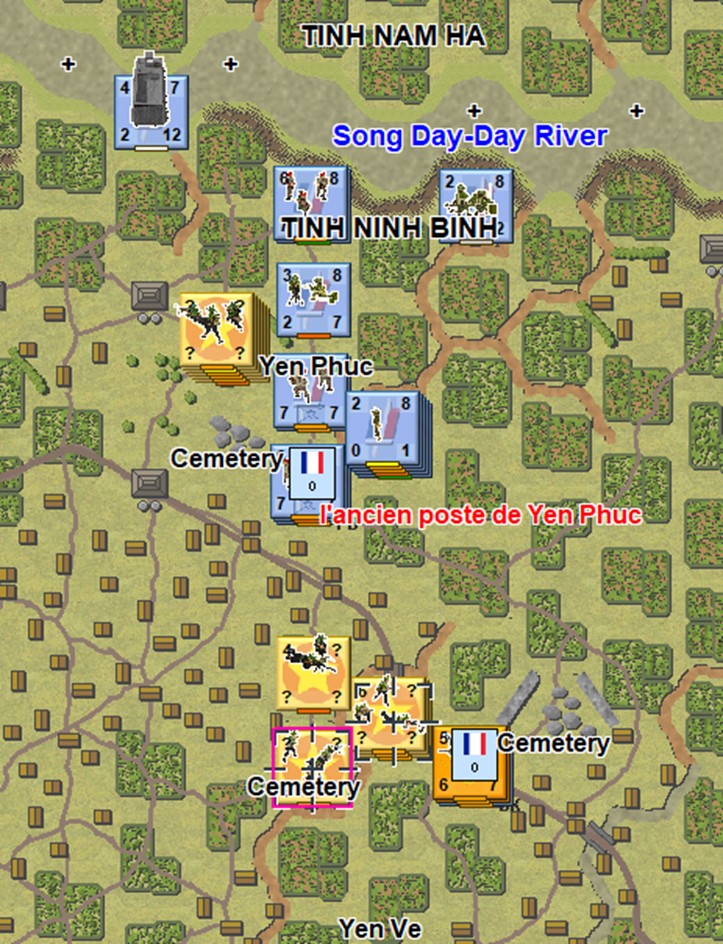