A French “Special Forces” was organized by General de Lattre in 1951. It was named “COMMANDOS NORD-VIETNAM.” This article provides more insight, and its relationship to the larger GCMA or Groupe Commandos Mixte Aeroporte, commanded by Colonel Roger Trinquier.

General de Lattre realized that a commando force was needed. He saw the need for unconventional forces, and wanted to improve equipment, weaponry, and living conditions for the indigeneous Vietnamese troops. Based on experience with Japanese resistance, and also that of the Marine and Dinassaut units, he wanted light units made up mainly of auxiliaries supervised by a few Europeans,  determined volunteers, specially trained in night and jungle combat, to strike at the Viet Minh, using their same methods. This was seen as a way to regain confidence of the Vietnamese people, of the “rice fields or the mountains,” to encourage them to return to French loyalty.

Colonel Louis Fourcade was assigned as commander of the entire COMMANDOS NORD-VIETNAM. He was known as the “le grande Patron.” (Big Boss) Previously, Fourcade had in 1945 led Commando Conus, fighting in Cochinchina, Cambodia, and then in Laos. This unit was in liaison with Colonel de la Bollardière’s 1st SAS parachute brigade. Upon his return to Metropole in 1946, he commanded the GITCM Commando School in Frejus, France.

The GCMA airborne commandos (Groupe Commando Mixte Aéroporté,) were Vietnamese ethnic minorities or Laotian montagnard partisans led by paratrooper officers of the SDECE French intelligence agency. Colonel Roger Trinquier was the legendary leader of this rather large organization. Some of them would be used as cadres in COMMANDO NORD-VIETNAM. But, these were still two separate organizations. COMMANDO NORD-VIETNAM operated in the Tonkin Delta areas, and perhaps a little beyond. GCMA operated all over Indochina. 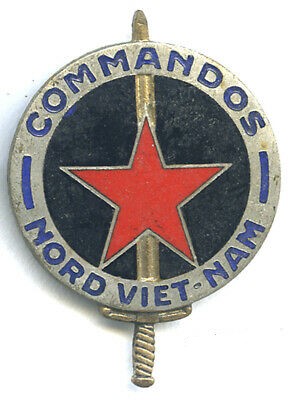 Each “Commando” was a company sized unit, and numbered and named, for example, like Commando 24. Some of these were alternatively referred to by the commander name such as Commando “Rusconi.” Some commandos had nicknames, such as “Tigres Noirs,” or “Black Tigers.”

Leadership usually consisted of nine French soldiers, mostly from the “Parachutistes Coloniaux.” The commander was an officer or or Adjudant Chef or Adjudant  (warrant officer). Four NCOs would lead the sections, with one acting as the executive officer. Two junior ranks were radiomen, and two others were medics.

The remainder were indigenous troops, numbering up to 120 men per Commando. These troops were volunteers that come from companies of existing auxiliaries, or from militias in villages, or from young Vietnamese civilians. The auxiliaries or Légères de Supplétifs Militaires, (CLSM) were companies that formed the basis for many Commandos. These CLSM had typically served as garrison troops on the de Lattre line, but with additional training.

There were also former PIMs (Prisonniers et internés militaires) arrested as suspects during operations, preferring to fight rather than hang out as “coolies” in labor camps. Some commando leaders recruited former Viet Minh soldiers. These were often experienced guerilla fighters, but their loyalty was not always certain.

Commando units were organized, equipped, and trained for one of three mission types: Shock (Choc,)  Marine, and Guerilla.

‘Shock Commandos’ were reserves that carried out deep raids, with a view to destroying enemy bases, and the Viet Minh territorial organization. They disrupted logistics and reinforcements. They acted alone or in cooperation with mobile groups in large-scale operations (ARTOIS, GERFAUT, etc.)

The group of “Landing Commandos” or “Marines”, were called upon to work frequently in liaison with Navy formations for landing missions on the coasts or along the rivers and arroyos of the delta. (OPERATIONS GRASSE, ROCHEFORT, etc.)

.Finally, the group of so-called Zone Commandos, were oriented towards the search for intelligence, and the actions of “guerrilla – counter-guerrilla” warfare, mainly in their areas. They provided assistance for the Zone or Sector Commanders, helping with clean-up or sweeping operations.

Given the diversity of recruitment, Col. Fourcade planned to involve “Commandos” in a training and cohesion course. Ecole de Vat Chay was set up for this purpose in 1951, with Capitaine Michel Legrand commanding. Operational requirements did not allow everyone to participate. New recruits were trained by their officers. 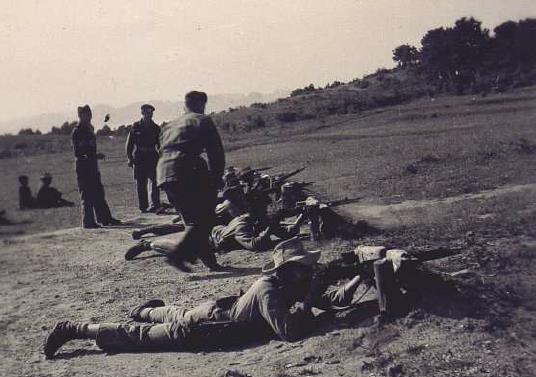 This was one of the more well-known Commandos and was one of the original eight formed in July 1951. Roger Vandenberghe, I’adjudant‐chef, (Chief Warrant Officer) organized this unit from the 11e CLSM. A precursor to this unit participated in the Day River Campaign at Ninh Binh.

Vandenberghe was born in Paris on October 27, 1927 in an extremely modest environment. His father suffered from turberculosis, and his mother, a Spanish Jew, struggled to support the family. With his brother, Vandenberghe was placed in a public boarding school, where he sometimes defied the authorities. In 1939, his father died, and in 1943, his mother was arrested by the Nazis.

Roger joined the Resistance, and was in a surveillance unit on the Franco-Spanish border. When WWII ended, he joined the French Army.  In January 1947, he embarked with the 49th Infantry Regiment, headed to Indochina. He was later assigned to the 10th Company, 6th Colonial Infantry Regiment. He rose to the rank of Sergeant and commanded a section of Vietnamese “suppletifs.”

In 1949, Vandenberghe was hit in the chest with a bullet, and repatriated to France. He survived and recovered. His actions earned the Knight of the Legion of Honour, at age 21. Returning to Indochina a few months later, he continued as section leader. Then in 1951, he was in the 5th Company of the 6th Colonial Regiment, stationed around Nam Dinh

At the time of the Viet Minh attack on Ninh Binh on 29 May 1951, the French were scrambling to get reinforcments into the battle. On 30 May, Vandenberghe’s reconnaissance group scouted for Groupe Mobile No 1, that retook the high crag south of Ninh Binh. This was when the body of Bernard de Lattre was found. He was the son of General de Lattre, and had commanded the 8th armored squadron of the 1er Regiment Chasseurs de Cheval.

Subsequent to the Day River Campaign, the 11e CLSM was reorganized by Vandenberghe, as Commando 24. Modeled on the “guerilla” type of units, they were trained and equipped for reconnaissance and covert operations. Their uniforms were similar to Viet Minh, so they could confuse the enemy. 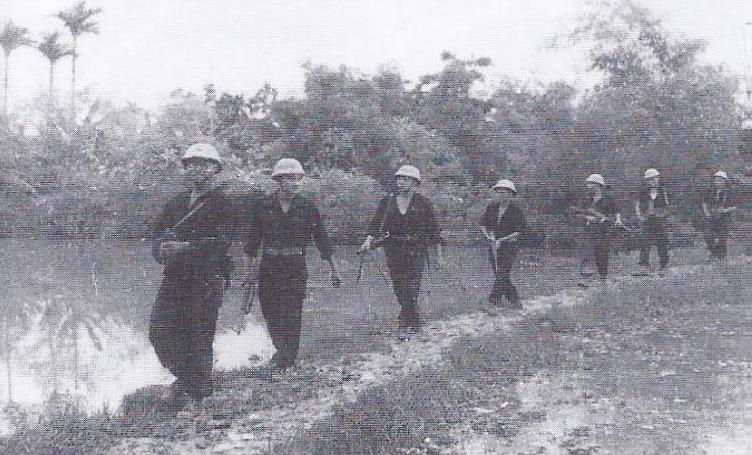 In one mission into a deep enemy zone, Vandenberghe himself pretended to be a prisoner, and was led by his troops, disguised as Viet Minh, to openly march to a VM Commissar. The Viet Minh were too gullible, and at the right moment Commando 24 soldiers emerged and opened fire. They retrieved weapons and documents, including communications of an impending VM attack. This type of operation earned Commando 24 the name of “Tigres Noirs” or “Black Tigers.”

But, tragedy struck on the night of 5 January, 1952. Since former Viet Minh regulars were recruited as part of the Commando, occasional betrayal happened. At age 24, Roger Vandenberghe was murdered in his sleep by Nguien Tinh Khoi, former assault unit commander in the Viet Minh 36th Regiment.  Vandenberghe was posthumorously awarded yet another Croix de Guerre with palms. 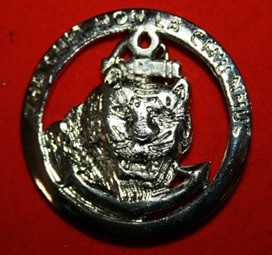 This unit was formed from the 170e CLSM, and initially commanded by Lt. Michel Romary. Organized as a Marine Commando, it participated in the Day River Campaign.

On 30 May, Commando 25 landed at Yen Cu Ha to reinforce the garrison there. This poste had been defended by Catholic Militia and Hung Yen partisans. On 5 June, the Viet Minh 88th Regiment attacked. Viet Minh gunners bludgeoned the position for two hours with “SKZ” (Sung Khong Zat: Chinese guns without recoil,) and mortars. This was also the first time they used WP, white phosphorus shells. Suicide sappers, called “death volunteers” undermined the walls with hollow loads,  and the general assault overwhelmed the position, but it changed hands four times.

As the handful of fighters, led by Lt. Romary (injured by two bullets and multiple shrapnel,) realized their desperate situation, LSSL No. 6 of Dinassaut “A” appears on the River Day, firing machine guns. This pushes the enemy back, and allows room for the reinforcements from 7BPC and 4/7RTA to land. The wounded Lt. Romary was later awarded the  Légion d’Honneur. 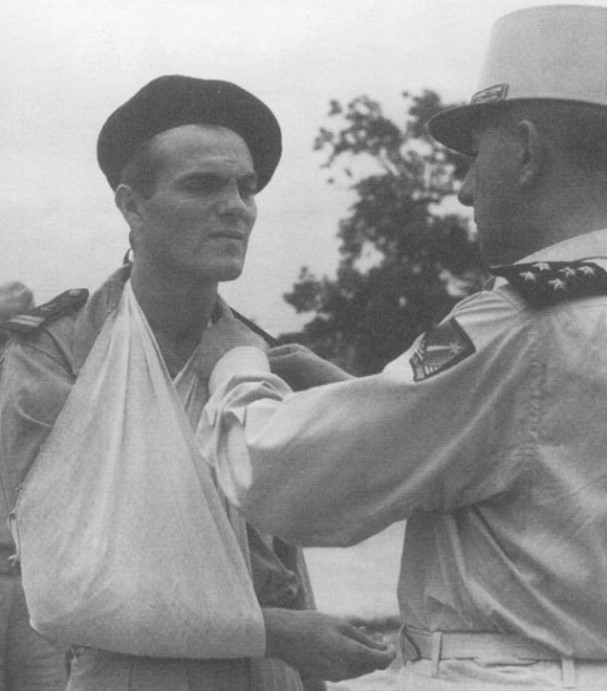 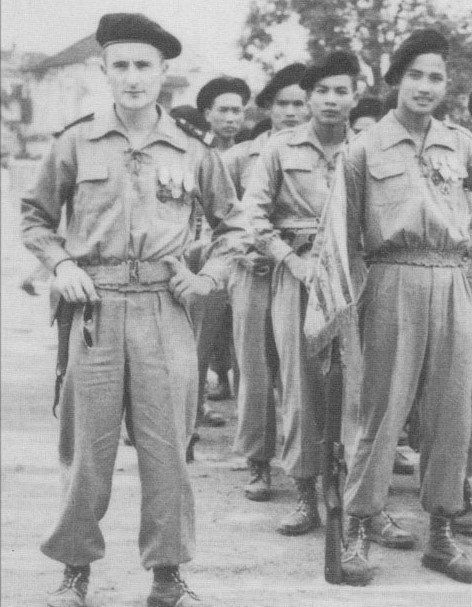 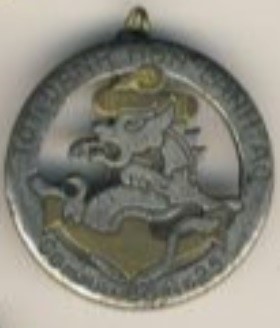