As all of us know, there is much concern about scenario design. Wargamers want to play the best scenarios available. But, what are the important aspects for good scenarios? What constitutes a well-designed scenario?

Well, I think there are at least three important goals in scenario design:

Of course, balance is probably the most important thing to players. Who wants to play a game only to find out later that the odds were heavily stacked against him? If it was because the designer did not do adequate playtesting or did not consider enough factors, then the scenario is not too much fun. Most players avoid known unbalanced scenarios. Getting balance in a scenario is very difficult, however.

Techniques for balancing are vast, and books could be written about them. Here I’ll cover just a few key concepts. First, is it possible through some method or strategy for one player to dominate, with no effective counter? If the answer is yes, then a serious balancing problem needs to be addressed.

Ideas that work most of the time are: Use high objective values, assign victory levels with good margins, and assume losses are equal for preliminary victory levels. High objective values provide incentive for players to attack, and pursue them. But, they shouldn’t be so high that players disregard losses. (Live to fight another day.) Objective values should be proportional to size modifiers, and the amount of forces involved. For example, it doesn’t make sense to have 1000-point objectives in a small scenario, size modifier 1. Note that an infantry battalion is worth between 400-500 points. Players should evaluate objectives, and pursue those that are worth more than potential losses in taking them. Use playtesting to evaluate the disparity of losses, and then the victory levels can be adjusted.

Another concept is equilibrium. If one side can consistently destroy most of the enemy within the time limit, then “equilibrium” is not achieved. Balance is not likely in these cases, or at least not in a traditional sense. In some matchups, regardless of victory conditions being met, both sides have losses reducing their effectiveness to the point that neither side can continue an offensive. This is when “equilibrium” occurs. If this is observed during playtesting, then it is possible to get a balanced scenario by modifying objective values, setting victory levels, and adjusting the time limit. Typically, the time limit should be shortened so that “equilibrium” is not quite reached in average games.

Playtesting is the ultimate method for obtaining balance. It is only through many playtests, that the designer can understand how forces, terrain, or reinforcement schedules affect outcome. They must also be aware of differences in playtester skills. With enough playtests, perhaps eight or more, statistical analysis of scores is a tool for assigning victory levels. The main point here is that rigorous playtesting, with many games played, is probably a designer’s best chance to get a balanced scenario.

Historical accuracy is important for most players, even for those who like hypothetical scenarios. Who would be proud of a scenario that featured 1946 Viet Minh troops outfitted with AK-47s? There are three basic scenario levels for historical content: Purely historical, historical based, and hypothetical. All of these are acceptable, but scenario descriptions should identify this. The factors for historical accuracy are: map era, forces available, weapon plausibility, objectives and narrative, and finally, unit and commander identification.

The map should reflect the period within a few years, perhaps, of the battle date. Using a modern map with superhighways, and sprawling urban areas is probably not a good idea for an Indochina battle in 1953. Luckily for CS Vietnam, there are many mid-1960s topographical maps available, covering virtually all areas of Vietnam, Laos, and Cambodia.

The forces should reflect the kinds of units and weapons in armies of that period. Unless a historical narrative provides exception, the standard unit organizations should be used in most cases. Weapons should be at least plausible. A 1965 VC tank battalion was probably not very likely. This is common sense, but subtle details about some weapons, like artillery pieces, may be overlooked. A certain howitzer model may seem okay, yet may not have been available at the time of battle. This type of information must be carefully researched. The org-editor will not always prevent these mistakes.

Having a good, detailed narrative gives the designer adequate information needed for a historically accurate scenario. Unit organizations should be as close as possible to the narrative, and also the typical structures of the era. Having unit numbers down to the company and platoon level make the scenario more realistic based. To the extent possible, a designer should try to find as many commander names as available references provide. The internet is probably the best resource. Particularly if a leader had a colorful past, or had a reputation, this narrative can be brought out in the org file, and in the description.

Intrigue is a somewhat elusive concept, but one with conceptual meaning. It is what makes any topic interesting. For battles, the things that add interest are surprise elements, deception, or upsetting events. And, it could be the leaders or colorful soldiers involved, if they were legendary, or mysterious, or showed some particularly great skill or bravery. As far as combat elements are concerned, the weapon-counter weapon dichotomy adds interest.

For example if one side has many tanks, but the opponent has some good defensive cover, and powerful anti-tank guns, then this could be an interesting situation. Asymmetrical warfare is the key here. Concealment, and smoke always add interest and surprise. The mine – engineer dyad always makes for interesting situations. Does the attacker know there is a minefield? And once he discovers it, does he have engineers available to clear them?

Counterbattery artillery fire can add interest, especially if rockets or artillery are mobile, and can move after firing. The air defense – aerial bombing duel was a staple of the Vietnam conflicts. Scenario features like trenches, blocks, and caves add in some elements that make it more challenging for the attacker. And, with the new CS Event Engine, there are even more possibilities to provide elements for intrigue.

I imagine that Col. David Hackworth would have agreed on the importance of playtesting, just like he believed in after-action critiques . . . 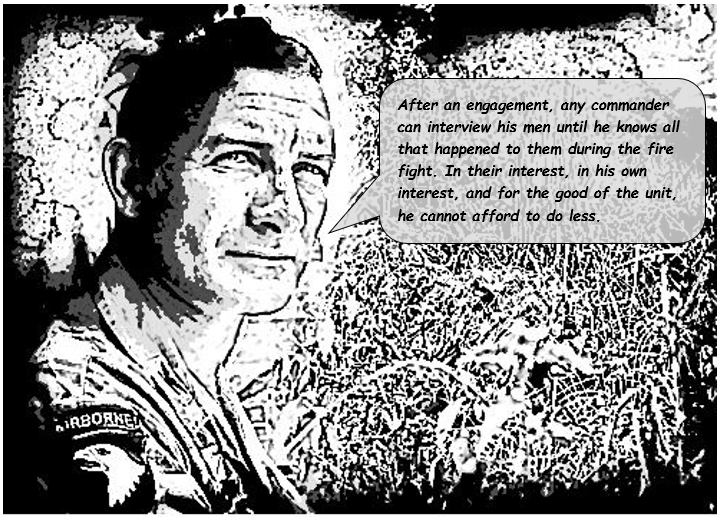