This is the first article  of a new six-part series, Vietnam War 1964-1967. It is an overview of political and military events, and describes major themes and issues shaping course of the war. Each subsequent article summarizes the main battles and events of that year. This is intended to give a closer look at actual battles, operations, and campaigns, and serves as a historical background guide for the new Campaign Series: Vietnam game.

The 1963 coup that overthrew President Ngo Dinh Diem, and the assassination of President Kennedy marked the end of the early era of the Vietnam War. In 1964, the war escalated, and by 1967 was a large scale conventional war.

Sometimes, this war is called the “Second Indochina War.” For the North Vietnamese, it was called the “American Resistance War.” For our purposes, it is referred to simply as the “Vietnam War.”

In the early days of 1964, the South Vietnamese government was in turmoil and had interim leadership of military generals. Later, President Thieu would provide some political stability. As for the Americans, President Johnson was office during this entire period.

The escalation in this period can be illustrated by US troop strength. In 1964, there were about 16000 US advisors, and no conventional ground troops. The first ground soldiers were 3500 Marines that landed in March 1965. By the end of 1965, there were 38000. Each year the number of combatant troops increased, and by the end of 1967, 400000 American servicemen were in Vietnam. Major battles in 1967, such as Dak To and Khe Sanh, were omens of the climactic Tet Offensive  in 1968.

In early 1964, South Vietnam was ran by a military committee presided by General Minh. A second coup in late January put General Nguyen Khanh in charge of a similar arrangement. The January coup highlights the instability of the South Vietnamese government at that time.

The North Vietnamese exploited the instability in the South, and stepped up guerilla attacks, particularly against US airbases. Also the Communist “navy” became more aggressive and provoked an attack by two US destroyers on two NVA torpedo boats. The USS Maddox and USS Turner Joy were involved in what was to become known as the “Gulf of Tonkin Incident.” This lead to the Gulf of Tonkin Resolution on 7 August 1964, signed by President Johnson. It granted him power to conduct military operations in Southeast Asia without declaring war.

In early 1964 Viet Cong guerilla activity increased in the Mekong Delta. Two significant battles there were Thanh Phu Island and Mo-Cay. The trend was for more frequent and deadly attacks by the Viet Cong, and more difficulty for ARVN forces to counter them.

The battle of Battle of Binh Gia was the first “set-piece” battle in which the Viet Cong severely mauled ARVN units. This took place late in 1964 in an area southeast of Saigon. It was major action involving two Viet Cong Regiments fighting two ARVN Ranger battalions and a Marine battalion. This was considered a defeat for ARVN forces, although in the end the Viet Cong withdrew. Previously, Communist forces used hit-and-run guerrilla tactics, however at Binh Gia, they had defeated a strong ARVN force in a conventional battle.

In early 1965 the significant event was the Marine landings at Da Nang. This would form the Ill Marine Amphibious Force (Ill MAF) which was intended to provide security for US airbases.

The Viet Cong began a summer offensive with the battle of Dong Xoai in Phuoc Long Province. A CIDG camp was attacked, and ARVN forces responded, first with an infantry battalion and then an airborne battalion. Both ARVN battalions suffered heavy losses in ambushes. This prompted MACV General Westmoreland to insert elements of the 173rd Airborne Brigade for the first time. But when the American paratroopers arrived, the VC had already withdrawn.

Another clash between American and NVA troops was Operation Gibraltar. This was a clearing operation at An Ninh near An Khe, the base of the US 1st Cavalry Division. The 2-502 battalion landed right into an NVA training camp and a horrific battle ensued.

The most epic battle of 1965 was Ia Drang. US forces pursued NVA near the Cambodian border in Pleiku province. This was the first large airmobile operation. The 1st Battalion, 7th Cavalry landed by helicopter right by a large mountain defended by the NVA 66th Regiment. The battle raged for three days, and there were significant casualties on both sides. In the end however, the battle convinced Ho Chi Minh that North Vietnam would win the war.

For the Americans, Ia Drang proved the effectiveness of air mobile operations and helicopters in combat. They brought in ammunition, grenades, water, and medical supplies, and took out the American wounded. Without helicopters, the battles like Ia Drang could never have taken place. Thus, the Huey became the most familiar icon of the war.

Politically, the cycle of coups ended, and greater stability came to South Vietnam when Nguyen Van Thieu became President, and Nguyen Cao Ky became prime minister. They were strong enough to keep their power and position. The Struggle Movement was put down, and they prevailed in the September elections.

The year 1966 introduced Australian, New Zealand, and South Korean forces into the war. The battle of Hobo Woods was a joint US-Australian military operation, near Cu Chi, in Binh Duong Province. This battle also illustrated the use of tunnels and underground facilities used by the Viet Cong.

Suoi Bong Trang was fought between US, Australian, and New Zealand forces, and the Viet Cong and NVA. This occurred during Operation Rolling Stone, an American security operation to protect engineers building a tactically important road in the vicinity of Tan Binh, in central Binh Duong Province. The Viet Cong suffered heavy casualties, and were forced to withdraw.

Operation Utah was a US Marine Corps and ARVN operation northwest of Quang Ngai. It was an airmobile operation to clear out VC. It was an intense battle with high losses on both sides. Air and artillery support preceded a final Marine assault, but the enemy had slipped away.

The overall trend in 1966 was for greater attacks by the VC and NVA. The MACV forces were able to defend areas and even make some sweeps. But, the North Vietnamese would not commit large forces “set piece” battles to permanently hold ground.

The trend in 1967 was increased NVA operations, particularly in border areas. Unknown to MACV at the time, it was intended to draw US and ARVN forces away from populated areas, which would then be attacked during the Tet Offensive the following year. Khe Sanh and Dak To are examples.

Although the initial operation appeared successful, the VC withdrew into Cambodia. Then, they made a series of attacks to inflict losses and wear down the Americans at Prek Klok, Ap Bau Bang, and Ap Gu. One of these was an attack on a firebase. Each time, the VC would attack, inflict casualties, and then the Americans would respond with air and artillery support. American forces would then search, only to find that the VC had withdrawn.

Khe Sanh was a series of “Hill Fights” between the NVA 325C Division and US Marines in I CTZ. The Marines struggled to gain control of several hills north of the Khe Sanh forward operating  base. With air and artillery support, the Marines eventually captured several important hills there.

In the last half of 1967, NVA forces attacked in the Dak To area of the Central Highlands. This led to Operation Greely. In one engagement, an entire US infantry company was wiped out. This led to a scandal, ultimately leading to the commander and junior officers of two companies being transferred. 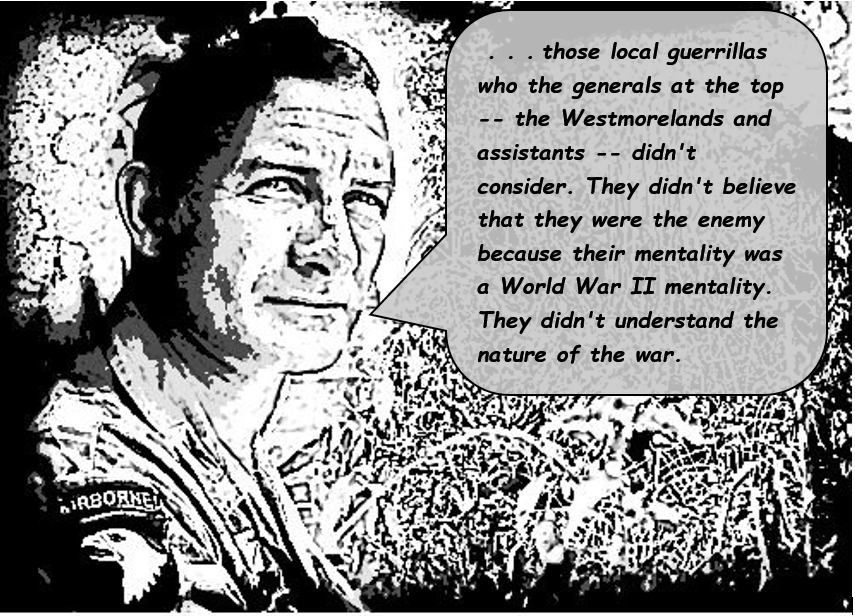