The political turmoil described in the previous article emboldened the Viet Cong. Their activities increased in the Mekong Delta in early 1964. Two notable battles were Thanh-Phu Island and Mo Cay. Later that year, attacks increased around Saigon, culminating with the epic battle, Binh Gia.

On January 17, 1964, a US Army helicopter UH-1B was attacked by a rocket-propelled grenade, causing the helicopter to explode in flight and crash. Four crewmen were killed. This occurred on a mission supporting ARVN operations on Thanh Phu Island in Kien Hoa Province.

In previous days, VC 303 Battalion infiltrated the island, and set up ambushes. ARVN forces including the  8th Parachute Battalion, 2nd Marine Battalion, and a Ranger Task Force responded, and were able to regain the lost villages, while sustaining high losses. They tried to trap the Viet Cong, but most of the 303 Battalion escaped.

This action is represented in Campaign Series Vietnam by a scenario, Battle of Thanh-Phu Island. 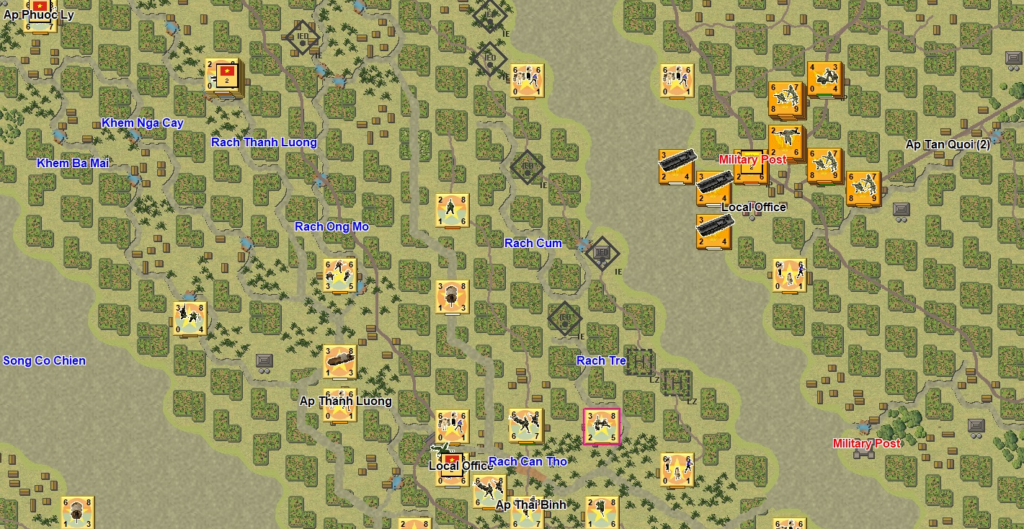 An ARVN Civil Guard unit was attacked by VC company 8 km north of Mo-Cay, on 9 April, 1964.  A truck-borne  ARVN relief battalion was ambushed by the VC D507 Battalion on three sides. During the ambush, another VC battalion, D307 attacked the Mo Cay garrison. The ARVN defenders held long enough for helicopter reinforcements. The CSVN scenario is  “From Bad to Worse.”

This action was in the Kien Hoa Province. A common VC tactic was attacks on Civil Guard posts to capture their supplies and weapons. When these outposts were attacked, ARVN would attempt to rescue the garrison and engage any Viet Cong in the area. Ambushes of relief columns were  becoming commonplace. With VNAF air support, they could be beaten off.

But, on the morning of 9 April, the VC attack appeared as typical, but the Viet Cong had additional  surprises in store. It took the ARVN 10th and 11th Regiments, Mo Cay Regional Force companies, and a US Aviation battalion to eventually recapture Mo Cay. ARVN losses were quite heavy. 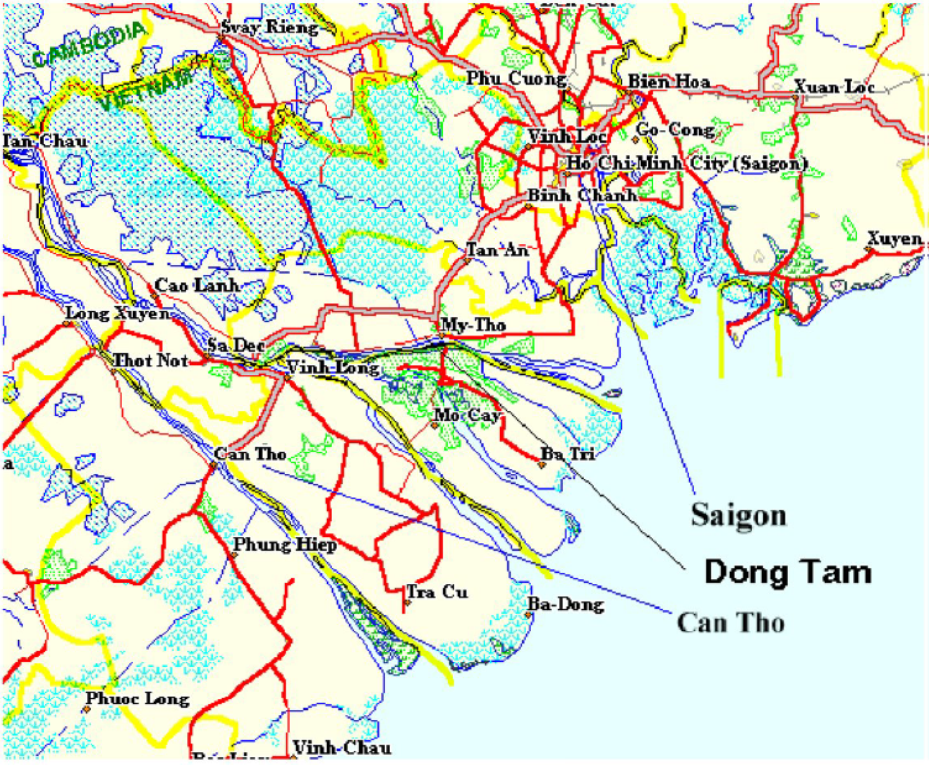 Battle of Binh Gia was the first “set-piece” battle in which the Viet Cong severely mauled ARVN units.

This is represented in Campaign Series Vietnam by the scenarios  Battle of Binh Gia #1 , #2, #3 and #4. In December 1964, ARVN suffered heavy losses in a battle that both sides viewed as a watershed. Previously, Communist forces used only hit-and-run guerrilla tactics, however at Binh Gia, they had defeated a strong ARVN force in a conventional battle.

In the second half of 1964, the Viet Cong commenced a series of large-scale military operations, as ordered by the North Vietnamese. The area was in the III Corps Tactical Zone, around Saigon.

Following these initial stages, an offensive was planned in the Long Khanh region, with Bình Gia as the next target. It was a small village in Phuoc Tuy Province, 67 kilometres southeast of  Saigon.

In early December, the Viet Cong 272nd Regiment set up roadblocks on Inter-provincial Road No. 2 and 15. They ambushed and destroyed an ARVN mechanised rifle company. A few days later, they destroyed six armored vehicles on Road 15.

In late December, the 271st Regiment penetrated the Bình Gia eastern perimeter, and attacked the South Vietnamese Popular Force militiamen, which numbered about 65 personnel. The militia fighters were overwhelmed, and quickly retreated into underground bunkers, and called for help.

After securing the village, the Viet Cong set up a command post in the church. They were reinforced with heavy mortars, machine guns and recoilless rifles. To counter ARVN helicopter assaults, the VC set up defensive fortifications, including trenches and bunkers ringed by land mines and barbed wire.

On 29 December, the ARVN 33rd Ranger Battalion and a company from 30th Ranger Battalion were brought in with an airmobile operation using helicopters. They were airlifted into area located west of Bình Gia. They faced an enemy force of unknown size.

Upon arrival in the landing zone, ARVN troops were quickly overwhelmed by Viet Cong in a deadly ambush. The entire 30th Ranger Battalion was then committed to join the attack, but they failed to penetrate strong defenses. Several more Ranger companies arrived, but were unable to break through Viet Cong defenses.

The 38th Ranger Battalion landed unopposed, and immediately advanced on Bình Gia from the south. They spent the whole day fighting, but could not break through the defences.

The 4th ARVN Marine Battalion moved out from Bien Hoa Air Base, and arrived on the outskirts of Binh Gia. They marched towards the Catholic church to relieve the besieged Rangers. About one and a half hours later, the 4th Marine Battalion linked up with the 30th, 33rd and 38th Ranger Battalions, and the Viet Cong began withdrawing to the northeast.

However, in the evening 30 December, the Viet Cong returned to Bình Gia, and attacked from the southeast. The South Vietnamese were able to repel the Viet Cong, with support from US Army helicopter gunships from Vung Tau airbase.

While pursuing the Viet Cong, a helicopter gunship from the US 68th Assault Helicopter Company was shot down and crashed in the Quang Giao rubber plantation, about four kilometres southeast of Bình Gia. Four crewmen were killed.

The 2/4th Marine company went out to the Quang Giao rubber plantation to recover the bodies. But VC opened fire and the Marine company had to pull back. The entire 4th Marine Battalion was then ordered to confront the enemy. They were met with artillery fire and human wave attacks. They had to fight with bayonets fixed to escape.

The next day, the 4th Marines returned to the crash site, and recovered the bodies. A US helicopter took the bodies of the Americans, and left. The Marines waited for helicopters to arrive to carry their casualties out. But none came, and they began retreating on foot.

Suddenly, they were attacked by three Viet Cong battalions, with artillery support. 4th Marine Battalion’s commanding and executive officers were immediately killed. Air support was not available. Two Marine companies fought their way out of the ambush, and back to Bình Gia, but the third was overrun and almost completely wiped out. The fourth company desperately held out at a hilltop against Viet Cong artillery barrages and large infantry charges, before slipping out through the enemy positions at dawn. The 4th Marine Battalion of 426 men lost a total of 117 soldiers killed, 71 wounded and 13 missing.

The Viet Cong suffered only light casualties, and did not leave a single casualty on the battlefield. In recognition of the 271st Regiment’s performance during the Bình Gia campaign, their high Command awarded the title ‘Bình Gia Regiment’ to honour the achievement. 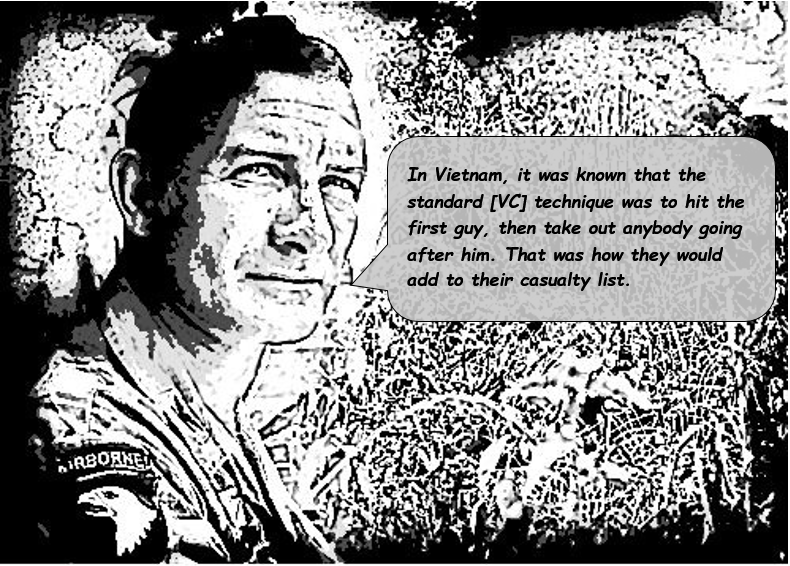