The Vietnam War really got into high gear in 1965. The Marines landed, and the US first major air mobile battle occurred at Ia Drang. Other significant battles were Dong Xoai, Gibraltar, and the Michelin Plantation. I’ll cover these here in more detail.

As Viet Cong activity escalated, US Air Force bases were increasingly being attacked. They needed more protection, which ARVN seemed incapable of providing. On 8 March 1965, 3500 US Marines were dispatched to South Vietnam. This marked the beginning of the American ground war. US public opinion overwhelmingly supported the deployment.

Marines from Battalion Landing Team (BLT) 3/9 came ashore at RED Beach 2, northwest of Da Nang. Initially, the 9th Marine Expeditionary Brigade was given responsibility to protect the vital Da Nang Airbase. By the end of 1965, more than 38000 Marines made up the Ill Marine Amphibious Force (Ill MAF) under Major General Lewis W. Walt. They would ultimately serve in the Quang Tri Province near the DMZ.

They arrived 10 June, but were quickly overwhelmed by the VC 271st Regiment near Thuan Loi. Later that day, Dong Xoai was recaptured by the ARVN 52nd Ranger Battalion, which survived an ambush prior to battlefield arrival.

On 11 June, the ARVN 7th Airborne Battalion arrived. While searching for 1st Battalion survivors in the Thuan Loi rubber plantation, South Vietnamese paratroopers were defeated in a deadly ambush.

On June 13, US Army General William Westmoreland decided to insert elements of the 173rd Airborne Brigade into a major battle for the first time, because he feared the Viet Cong could secure a major base area in Phuoc Long Province. By that time, however, the Viet Cong had already withdrawn from the battlefield, and the paratroopers returned to base without a fight.

Operation Gibraltar was planned by MACV to clear the area around the 1st Cavalry Division’s base at An Khe. The battle at An Ninh took place from 18–19 September 1965 between elements of the NVA 94th and 95th Battalions, 2nd Regiment, 3rd Division, and the US 2nd Battalion, 502nd Infantry Regiment and ARVN Rangers. CSVN plans to represent this battle with a scenario, “Operation Gibraltar.”

After preliminary airstrikes, the first wave of helicopters dropped the 2-502 Inf and a company of ARVN Rangers at 0700, in a landing zone near the village of An Ninh, 30 km east of An Khe.

Unknown to US/ARVN forces, they had landed in the middle of a NVA training base.

In the afternoon, a relief force was transported to a landing zone near the battle. But before they could regroup and start to advance, night fell, and they had to stop.

It was the first serious firefight between regular forces of the U.S. Army and the NVA. The battle was covered by CBS News reporter John Laurence who interviewed the brigade commander, Colonel James Timothy, and paratroopers who had been in the fight. “It was a nightmare,” a private said. “Nobody slept all night.” A sergeant said, “I spent three years in Korea and never saw nothing like this.”

The NVA retreated overnight. When the relief force arrived, the battle was over.

The outcome was interpreted in different ways. General Westmoreland hailed it as a great victory. Others, such as David Hackworth and Maj. J.C.W. Dyke of the 101st Airborne Division considered the battle a tactical and strategic disaster. Dyke regarded the operation as a failure, because the landing zone was in the middle of a NVA training camp. Hackworth commenting that “the VC saved the day by walking away.”

This was the first major airmobile operation of the Vietnam War. Helicopters gave the Americans much greater mobility and additional firepower. However, Ho Chi Minh and General Giap gained confidence at Ia Drang. Their peasant soldiers withstood the high-tech firestorm thrown at them by a superpower, and fought the Americans to a draw.

The story begins in the Pleiku Province in November 1965 when 1st Brigade flew to the aid of the besieged ARVN base at Plei Me. They chased NVA 33rd and 320th Regiments as they retreated back to their bases on the Chu Pong Massif. The fighting consisted of a series of air assaults ranging from patrol to battalion strength as the brigade attempted to locate and attack retreating troops. After three weeks of heavy fighting, the 1st Brigade was rested, and the Garry Owen’s took over the pursuit in Operation Silver Bayonet. After several days of searching, it appeared that the Vietnamese forces had gotten away.

A lead suggesting that there were NVA around the Chu Pong Massif, 22 km southwest of Plei Me. A  reconnaissance-in-force mission was ordered, and assigned to 1st Battalion, 7th Cavalry under Lieutenant Colonel Hal Moore. He selected a landing zone codenamed LZ X-ray northeast of the Chu Pong Massif.

Soon after landing, Moore learned from a prisoner that he had found what he was looking for.

His battalion was landing right in front of the NVA 66th Regiment. By mid-afternoon, his battalion landed, but was already heavily engaged by elements of two Vietnamese battalions. B Company of the 2nd Battalion, 7th Cavalry was sent in to reinforce them.

The next morning, North Vietnamese attacks intensified as the remainder of the second battalion was committed. About to be overrun, Moore requested help from every aircraft available. This additional firepower turned the tide. Later that morning the 2nd Battalion, 5th Cavalry arrived having marched cross-country from LZ Victor. The afternoon, night and next morning saw further attacks by the NVA regiment, but the Cavalry’s perimeter held.

On the afternoon of the second day the exhausted troopers of the 1st Battalion were withdrawn with the rest of 2nd Battalion taking their place. After a relatively quiet night the Cavalry marched out of LZ X‑ray to be picked up from LZ Columbus and LZ Albany.

For the US Army, Ia Drang proved the concept of airmobile infantry warfare. Some feared helicopters were too flimsy and fragile to fly into hot landing zones. They were not. All 16 Hueys dedicated to lifting and supporting Colonel Moore’s besieged force in X-ray were shot full of holes, but only two were unable to fly out on their own. The rest brought in ammunition, grenades, water and medical supplies, and took out the American wounded in scores of sorties. Without them, the battles like Ia Drang could never have taken place. Thus, the Huey became the most familiar icon of the war.

Lt. Col. Nguyen Hu An, The PAVN commander figured out one other way to neutralize the American artillery and air power. It was called “Hug Them by the Belt Buckle,” or get in so close to US troops that their firepower could not be used, for fear of killing and wounding their own. “Then,” said An, “the fight would be man-to-man and much better odds.” 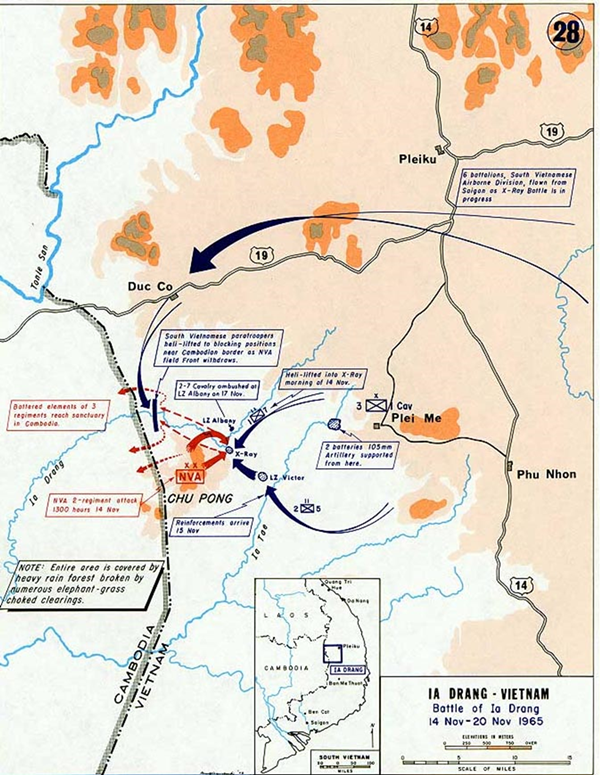 The CSVN plans to represent this battle with “Battle of Michelin Rubber Plantation (Ap Nha Mat).”

On 27 November 1965 ARVN 7th Regiment, 5th Division was operating in the Michelin Rubber Plantation, and was overrun by the VC 271st and 273rd Regiments, killing most of the Regiment, (possibly up to 500 soldiers,) and its 5 US advisers.

Maj Gen Seaman ordered Col. William Brodbeck’s 3rd Brigade, 1st Infantry Division to rescue the shattered 7th Regiment. Several days later, intelligence was received that the VC Phu Loi Battalion and the 272nd Regiment were operating in the area. The mission was changed to hunting and engaging those units. Viet Cong forces prepared an ambush for the incoming US forces. Initially codenamed Operation Bloodhound, but was revised to Bushmaster II.

On 5 December, 2-2 Inf assaulted a VC base complex, and were met by heavy fire from entrenched VC forces. An American attempt to outflank the VC position was repulsed, and the VC force then attempted to outflank and press the Americans who retreated into a defensive perimeter.

VC attempted to negate this firepower by “hugging” the American positions, but were forced back by small arms fire. The barrage continued for over 4 hours allowing the 2-2 Inf to secure their position, and to allow Companies A and C to move south behind a creeping barrage to overrun the VC bunkers.

18 aerial sorties added to the artillery barrage prompted the VC to withdraw. By 1430, the VC begun withdrawing, leaving behind their dead and wounded. Lt.Col. Shuffer decided not to pursue the retreating VC, fearing ambush, and withdrew into a night perimeter.

The 2-2 Inf spent the next few days policing the battlefield, and destroying bunkers. Operation Bushmaster II ended on 6 December.

Battle of An Ninh, Wikipedia 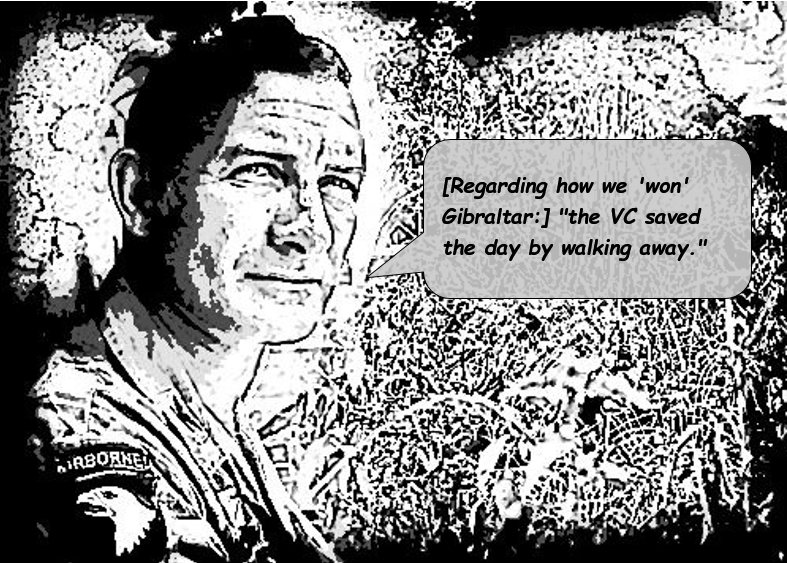