Nguyen Van Thieu gradually moved up within the ranks of the military junta by adopting a cautious approach, while other officers defeated and sidelined one another. In 1965, stability came to South Vietnam when Thieu became the figurehead President, or head of state, while Air Marshall Nguyen Cao Ky became prime minister. This ended the cycle of coups, and brought continuity, although the two men were rivals.

Ky and Thieu, while challenged, proved strong enough to keep their power and position. In putting down the Struggle Movement in the first half of 1966, and then delivering on the September, 1966 election, the South Vietnamese government, (GVN) effectively discredited the militant Buddhist leadership, and for the time being, ended its threat to political stablility.

In August 1966 the Koreans established a corps command after the arrival of the 9th Division. It was called the “Republic of Korea Forces Vietnam Field Command,” near I Field Force, Vietnam at Nha Trang.

Operation Crimp (8–14 January 1966), also known as the Battle of the Ho Bo Woods, was a joint US-Australian military operation, which took place 20 km north of Cu Chi, in Binh Duong Province. The operation targeted a key Viet Cong headquarters, believed to be concealed underground. The forces included two brigades under the command of the US 1st Infantry Division, including the 1st Battalion, Royal Australian Regiment (1 RAR) which was attached to the US 173rd Airborne Brigade. Heavy fighting resulted in significant casualties on both sides, but the combined American and Australian force was able to uncover an extensive tunnel network covering more than 200 km.

1 RAR made the initial assault, landing on LZ March at 0930 hours after an intense artillery and air preparation which had followed B-52 strikes. Resistance was light at first, but ran into a VC company. A fierce fight ensued which continued till after dark with the Australians overrunning successive positions, extensive bunker systems and trenches constructed in depth. The fortifications were highly defensible, and the VC defended tenaciously.

The operation was the largest allied military action mounted to that time, and the first fought at division level. Despite some success, the allied force was only able to partially clear the area. It remained a key Communist transit and supply base throughout the war. The tunnels were later used as a staging area for the attack on Saigon during the 1968 Tet offensive. 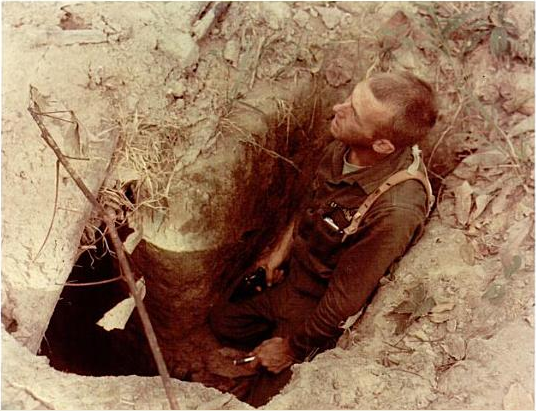 A US 1st Infantry Division soldier enters a tunnel during Operation Crimp.

The Battle of Suoi Bong Trang (23–24 February 1966) was an engagement fought between US, Australian, and New Zealand forces, and the Viet Cong and NVA. The battle occurred during Operation Rolling Stone, an American security operation to protect engineers building a tactically important road in the vicinity of Tan Binh, in central Binh Duong Province, 30 km northwest of Bien Hoa airbase. Soldiers from the US 1st Brigade, 1st Infantry Division and the 1st Battalion, Royal Australian Regiment (1 RAR), fought off a regimental-sized Viet Cong night assault.

Repulsed by massed firepower from artillery and tanks, the Viet Cong suffered heavy casualties and were forced to withdraw by morning. After the attack, Americans and Australians made no attempt to pursue the Viet Cong, focusing on securing the battlefield, and evacuating their own casualties. The Viet Cong continued to harass the American sappers with occasional sniper and mortar fire, but these tactics proved ineffective, and the road was completed by 2 March.

CSVN plans to include scenario ” Battle of Suoi Bong Trang.” 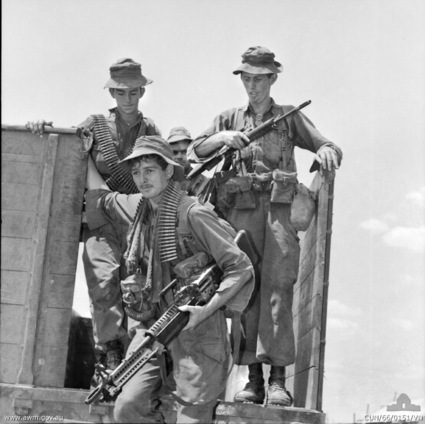 Marine A-4s, F-4s, and U.S. Air Force B-57s carried out airstrikes on the landing zone before the landings commenced at 09:00, however the incoming helicopters of Marine Aircraft Group 36 were met with intense anti-aircraft fire and one UH-1E gunship and an F-4 were shot down.

ARVN moved out and encountered strong opposition at Chau Nhai and Hill 50. By 13:30 they had called for support from the Marines, who moved to support them. As the Marines advanced on Hill 50, they came under intense fire from an estimated force of 2 NVA Battalions. The lines were so close that Marines could not call in air and artillery support. A gap developed between the Marines left flank and the ARVN, who refused to moved forward. The NVA exploited this gap cutting off two platoons of Company F for several hours until supported by Company H.

Darkness approached and the Marines withdrew under the cover of air and artillery strikes to defensive positions. The NVA probed Marine positions and harrassed resupply helicopters with anti-aircraft fire. The Marines launched a night assault on an anti-aircraft position killing at least 20.

At 0500 the next morning, PAVN launched an attack on the ARVN 1st Airborne position near Hill 50. Marine artillery responded with more than 1900 rounds on the perimeter over two hours. At 0730 3/1 Marines moved south to support ARVN. As the 3/1 Marines approached, they came under heavy fire from entrenched forces at Hill 50.

At 2300 Company B from the 1st Battalion, 7th Marines which were in a blocking position were hit by intense mortar and small arms fire. Running short of ammunition, they called for emergency resupply. Despite heavy anti-aircraft fire, two helicopters succeeded in dropping them munitions. At 0130, the NVA attacked the Marine perimeter,  but were forced back by small arms and artillery fire.

CSVN plans to simulate this battle in scenario: “Operation Utah.”

1 ATF began arriving between April and June 1966, constructing a base at Nui Dat, which was located astride a major Communist resupply route, close to a VC base area. After two months of preparation, the task force began operations to open the province.

VC mortars, recoilless rifles, and artillery bombarded Nui Dat from a position 2 km to the east, damaging the base, and wounding 24 men, one of whom later died. The following morning, B Company, 6th Battalion, Royal Australian Regiment (6 RAR), departed Nui Dat to locate the firing points, and the direction of the VC withdrawal. A number of weapon pits were subsequently found, as were the positions of the mortars and RCLs.

D Company took over the pursuit around midday on 18 August. After clashing with a VC squad in the afternoon and forcing them to withdraw, the Australians were engaged by small-arms and rocket-propelled grenade fire from a flank. Numbering only 108 men, D Company was facing a much larger force. Pinned down, they called for artillery as a monsoon rain began, reducing visibility. Heavy fighting ensued as advancing battalions of the 275th Regiment and D445 Battalion attempted to encircle and destroy the Australians. After several hours, D Company was nearly out of ammunition, when two UH-1B Iroquois from No. 9 Squadron RAAF arrived overhead to resupply them. Heavily outnumbered, but supported by strong artillery fire, D Company held off a regimental assault before a relief force of cavalry and infantry from Nui Dat fought their way through as darkness fell and forced the VC to withdraw just as they appeared to be preparing for a final assault.

Withdrawing to establish a landing zone to evacuate their casualties, the Australians formed a defensive position overnight. Returning in strength the next day, the Australians swept the area and located a number of NVA and VC dead.

CSVN plans to feature this battle in scenario: “Operation Smithfield.” 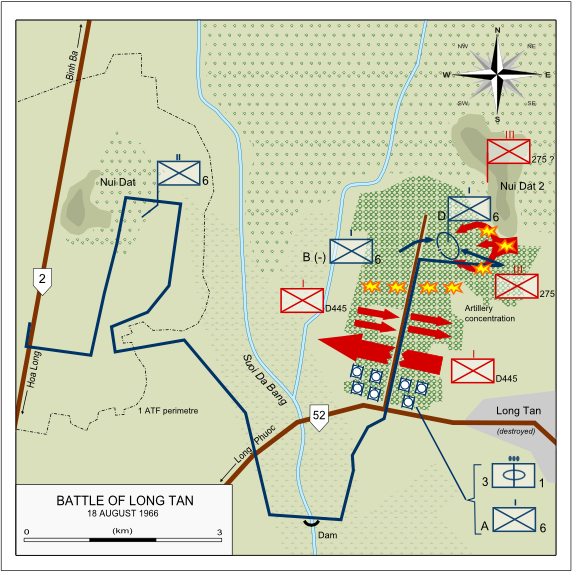 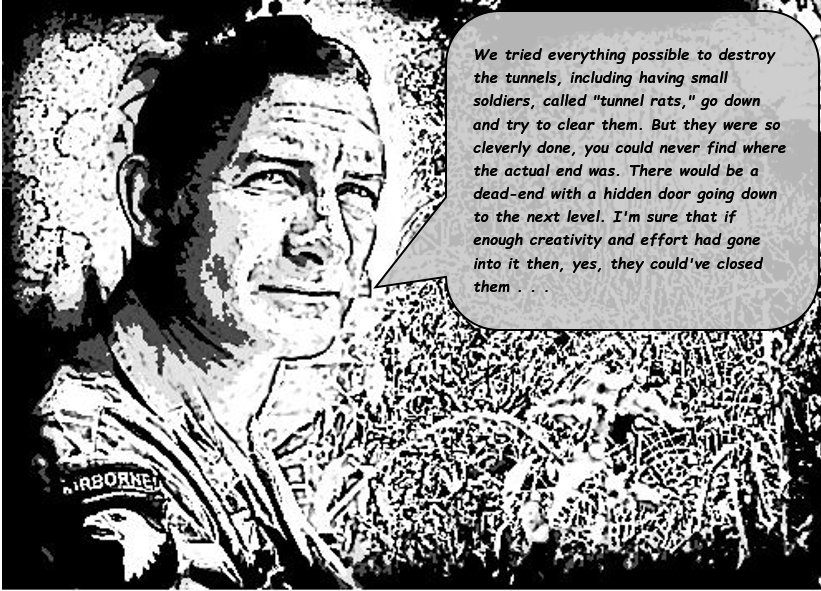