In my previous post, Hack’s Hardcore Hints #1: Scenario Design Ideas, I discussed what I feel are the three imporant goals in scenario design: balance, historical accuracy, and intrigue. In this article, I will elaborate on achieving balance in scenarios.

Using the mean and standard deviation in achieving balance

Scenario designers can use playtest statistics to set victory levels, and assure balancing. The analysis uses point scores as the statistical parameter. The mean (average,  symbol μ) and standard deviation (σ) of the scores are the key evaluation parameters.

With a set of playtest scores, we can use the mean to establish the midpoint of the victory levels. In other words, the mean score will be about the mid-point between the minor victory level and minor defeat.

The difference between the mean and a minor victory/defeat is about 13% of the standard deviation.  For a population with a normal curve (Bell curve, or Gaussian) distribution, this would result in about 10% draws. To set the value of for minor victory, the formula is mV = μ + 0.13 σ. The minor defeat levels is mD = μ – 0.13 σ.

The coefficient, 0.13 is the fraction of the standard deviation above the mean with a cumulative distribution value of 0.55. In other words, if we have a large population of scores, about 55% of will be less than the mean plus 0.13 times standard deviation.

If we wanted to allow for 20% draws, then the coefficient would be 0.26. But, we really prefer having winners and losers, rather than mere participants. 10% draws is a reasonable number, so the 0.13 coefficient is preferred.

How do we know it is normal? One approximate way is to compare the objective values and losses from a playtest. If the total objective points (all those held by the second side at the start,) are approximately equal to the sum of the loss points for both sides, at game’s end, normal is likely. (Maybe allowing for ± 20%.) However, if the total objective points are 3 or 4 times greater than total losses, then a normal distribution is unlikely.

For example, in a playtest, the total objective points are 475. The total loss points for both sides is 149 +310 = 459. These differ by only 3%, and so we expect this scenario  to have a normal distribution. Therefore, we can reasonably apply the formulas to set victory levels.

In addition to this, if the number of objective hexes is less than four, normal is less likely.

Here is a screenshot of a spreadsheet I’ve created as a tool for achieving balance on these principles I’ve discussed: 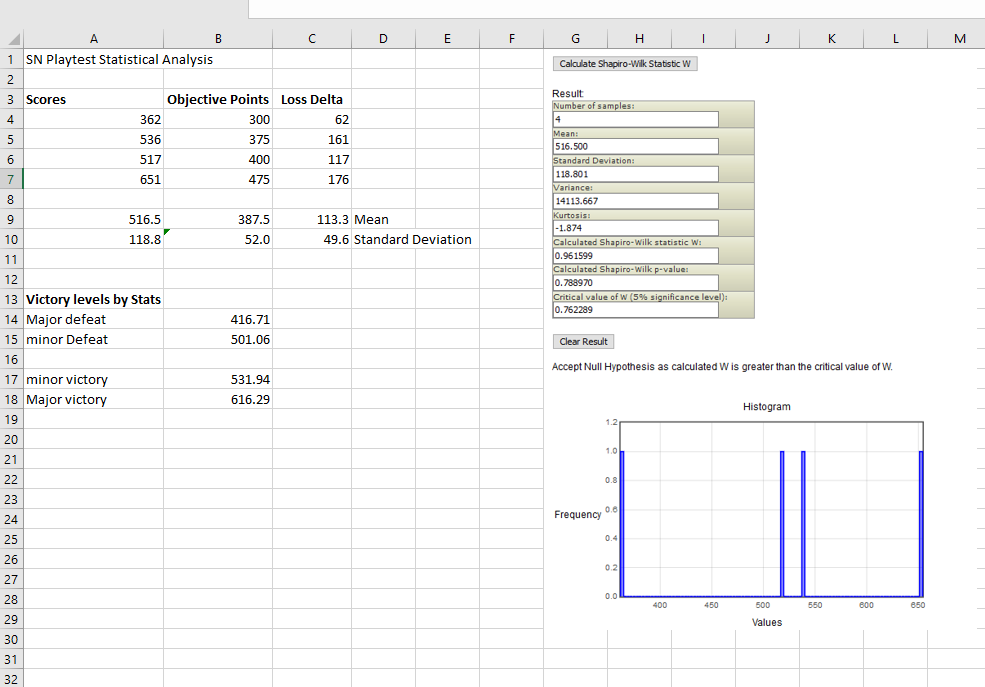 The Shapiro-Wilks analysis shown is a screenshot that was simply pasted into the spreadsheet.

The remaining issue is how many playtests are needed for statistical analysis. My suggestion is about eight. Naturally, the more the better, but scenario designers are faced with only limited numbers of playtests to work with. I believe that eight playtests will give good results. With fewer playtests, the victory levels should still be approximate, but might not predict large population accurately.

I imagine that Hack made use of statistics in the transformation of the pitiful 4/39 “Heartbreak” Battalion into the effective “Hardcore” Battalion in 1969. 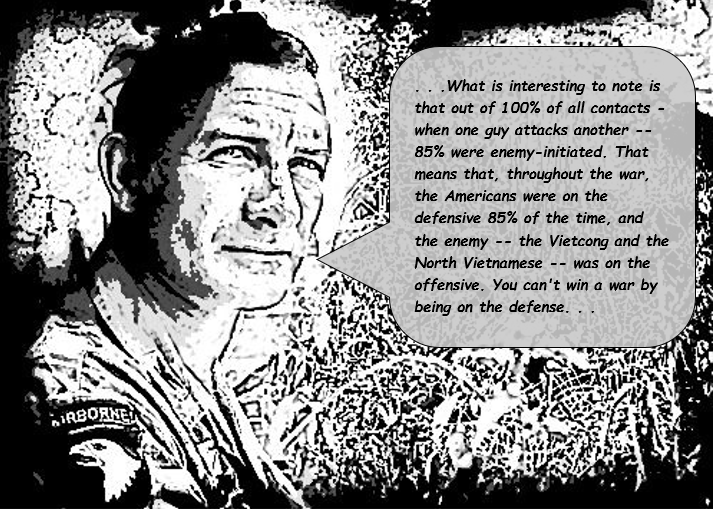