You might wonder, “What in the world is ‘Flavor Text’?” And, this is understandable. But, have you ever started reading a long-winded scenario description only to find yourself nodding off to sleep? All those detailed organizational phrases, passive tone sentences, and non-descriptive bureaucratese adjectives? Did it read like an Army FM manual?

Well, writing can be exciting and interesting, as well as informative. Flavor text can add some “spice” and intrigue to any scenario description. The most familiar example of flavor text I can give you was the advertising description on the old Avalon Hill Panzer Leader box:

“The sound of sporadic fire break over the ridge line.  Back in the distance, the deep rumble of the American heavy artillery echoes up and down the valley. The Allied offensive is now about to begin!

Spread out behind the lead German tank is a motley column of Panzers and tired, but experienced, German infantry.  This is all that remains, to plug the breach on the front. .

Outnumbered and outgunned, the chances are slim for German Kampfgruppe. . .

And they would be, except for the lone, solitary figure atop the front Tiger . . .

He is the “Panzer Leader.”

This alone may have sold many a game to excited wargamers. The flavor text paints a picture in words of the battlefield scene, and somehow stirs emotions. This helps to maintain reader attention, and add enjoyment. Novel authors use this approach.

How to write flavor text, but without being too corny?

The key is to use adjectives and nouns that convey visual imagery and also describe sounds. In this example, these phrases provide visual imagery: “motley column of panzers,”   “solitary figure atop the front Tiger,”  and “fortress Europe.”

As for sound: “sound of sporadic fire,” and “deep rumble of American heavy artillery echoes up and down the valley.”

Writing flavor text is mostly an art. The writer has to use some imagination, and perhaps do a little brainstorming, and not be afraid to use a Thesaurus.

To write flavor text paragraphs, keep these points in mind, and use this general structure:

How to incorporate this into a scenario description? Here is a possible structure:

With the new CS Event Engine, scenario designers can provide side specific briefings to be shown on the first turn of the game. These can give information that is intelligence and not intended for the other side to see. (Remember, scenario descriptions are seen by both players.) These can also be tailored to the kind of lingo used by the country. Communist propaganda lingo is particularly unique, but colorful, and adds interest and enjoyment. For example, if the first side is North Vietnamese, the briefing might be like so:

“Comrade Quang Tuyen: troops of the Vietnam People’s Army  face fierce engagements with enemy resistance, and must capture Pleiku, by storm, and liberate it from the yoke of the American Imperialist Invaders.

Communist propaganda lingo is always politically charged with ideological terminology. The purpose is to excite proletarian emotions against whoever the non-communist enemy is. Communists always refer to each other in a friendly fashion as “comrade.”

The enemy is always portrayed in evil, but ideological, terms. The Soviets referred to the Germans as: always either fascists, Hitlerite, Nazi, reactionary, invaders, or bourgeois.

However the communists always refer to themselves in noble terms such as revolutionary, anti-fascist, proletarian, Bolshevik, the people’s . . . etc.

For the Vietnam War, there were variations used by the North Vietnamese to describe the French and later, the Americans: They were always  colonialist, imperialist, capitalist, invaders, occupiers, landlords, or reactionary.

And the North Vietnamese referred to themselves as anti-colonialist, proletarian, communist, resistance, socialist, liberation workers, radicals, comrades, the people’s . . .

And then there are various closings used by communists. Closings from Stalin’s Orders:

You can use these examples, and without overdoing it, or making it too corny, these can add some interest, enjoyment, and perhaps a little humor into scenario descriptions and side specific briefings.

I imagine Col. Hackworth was not impressed with journalists’ flavor text regarding the American Army problems in Vietnam . . . 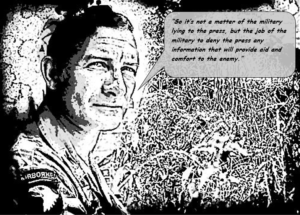