Have you ever wanted to get into scenario design, but hesitated because of the daunting amount of work in map making? With all the roads, various terrain features, elevations, streams, and labels, it can seem overwhelming. Those were the things that kept me from doing scenario design for a couple of years. But, with a good plan of attack, you can simplify the whole operation, and do it in a systematic way that will make the job more manageable.

The most important concept that helped me overcome my fears was the hex grid overlay. I began by making a screenshot of a blank map (with coordinates showing of course,) and then pasted this onto a topographical map using the transparency feature. You need a graphics software to make the transparency. PaintShop Pro, Gimp, and formerly the Microsoft Picture-It software are needed to make the grid semi-transparent. (40-50%) Currently I use a software called Photo Pad Image Editor. But, there are many software out there that can make an image semi-transparent to paste over a topographical map.

And the best topographical maps to use for Campaign Series are the 1:50000 scale. That best fits the 250-meter hexes, and the level of detail available in the map editor. Preferably, the topographical map will have elevation contour lines. These are the best tool for putting on elevations.

Once you have a suitable topographical map and have the overlay, what is next? What is the best approach for making the map overall? It is still quite an undertaking. The best way is to use this sequence:

By placing the roads, trails, streams, and towns first, this sets up a structure that aids in doing the elevations. The waterways are particularly important, and indicate how the contours should go. If there are areas of swamps or lakes, these should also be placed in the beginning along with roads and streams. Make sure that all villages and towns are identified as well. This will help with elevation work later.

Then tackle the elevations. Do this prior to adding terrain features like jungle, because these tend to obscure the contours, and color differences when viewing in both 2D and 3D. With elevations, it is best to work on small areas of the map at a time, using streams as boundaries.  Use the topo map contour lines, and trace out a line of hexes with that particular elevation on the map. Change the elevations along streams, one hex on each side. And then, look for high points or ridges between streams. The hexes in between are filled in last.

One important rule: A stream should never run uphill and then downhill again in the same direction. This may sound overly simple, but I have played several scenarios in the past that had “supernatural” streams that could flow uphill. Pay close attention to this, as it will help with elevations in general. Lakes and swamps covering several hexes should all have the same elevation. Keep this in mind with rice paddies also, although terraces can allow elevation changes in a group of rice paddy hexes.

Once the streams and contours are finished, then fill in between the contour lines. Using this systematic approach you can get the elevations reasonably good. There is a three-level limitation, so that if two adjacent hexes are more than three levels apart, the 3D transition will not look good. Try to avoid this if possible.

After finishing elevations, it is best to look over the whole map in 3D. This will reveal any inadvertent “holes” or areas missed. Also, it provides an opportunity to spot hexsides with more than three elevation levels difference. As mentioned earlier, it is easier to spot elevation errors before adding all the jungles and other foliage features.

The terrain features, like jungle, scrub, or tall grass, etc. can be handled systematically by referring to the hex coordinates. Simply start from left to right, and concentrate on one vertical column at a time, selecting and changing each hex from top to bottom. If your screen is too small to cover the whole map, then just do smaller rectangular areas at a time. If there are large areas with the same terrain, like light jungle, then a whole column of hexes can be changed at once. Click on the upper hex to change its elevation, and then hold down the control key (Ctrl) and click on a hex somewhere below it. The in-between hexes will immediately be converted to the selected elevation. This speeds up the process.

Finally, make the labels. I like to put a geographic coordinate somewhere on my map, using degrees and minutes, preferably with rounded minutes. Like 15°20’N, 105°35’E. This serves as a reference for players, and others who may want to find additional maps of that area. I use the left justification that puts a little plus sign (+) on the left side of the label. I use plain size 1 font for this. For small towns or villages, the font size is 0 and center justified, with plain black color. Streams are labeled using the “water” or blue color and mountains and forests that are named use the “Forest” or green color. I also label roads if they have a Route Number. Airports or other military facilities use “Special” or a red color. For the CS Vietnam map editor, I use the “Transparent Enhanced” option. That puts a thin white background around the text, and makes it stand out better if placed over dark green terrain. The term “transparent” means that the map background shows between the letters. This is more evident when viewing in the 3D mode.

Well I hope that you are encouraged to design scenarios, and not get discouraged because of map making. If you have a plan of attack, like all other things in war, it will make the job easier and less stressful.

I’m fairly certain that Col. Hackworth appreciated the value of good maps, and used them to plan his attacks on the VC. 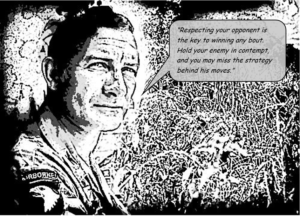