This series will cover US Forces in Vietnam, including the infantry, airmobile, armor, mechanized, fire support bases, riverine, and counterinsurgency warfare. This first article describes the overall organization of US forces and associated jargon. Having this background will help illustrate the more interesting topics to come.

The structure was a theater army with one to four corps – two or more divisions per corps. Divisions consisted of three brigades, each with two to five maneuver battalions plus division artillery, command, and combat support units.

“Fixed battalions” had a headquarters unit and a prescribed number of organic company-sized units permanently assigned to the battalion and designated by letters (A-D, for example).

Military Assistance Command, Vietnam (MACV), established in February 1962, was a joint command overseeing all US Army, Marines Corps, Air Force, and Navy forces in the country. MACV itself was subordinate to US Pacific Command. Army forces directly under MACV included: I and II FVV, XXIV Corps, 5th Special Forces Group, and all combat units. Various Free World Forces, (Australian, Korean, and Thai,) were also under MACV. 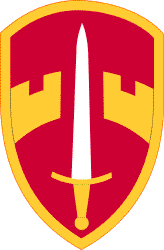 South Vietnam was divided into four corps tactical zones, I-IV CTZ. These were ARVN organizational areas, but were used by the US for convenience.

I CTZ was in the north below the DMZ.

II CTZ was the largest, and extended from Kontum down below Cam Ranh Bay.

III CTZ was the area around Saigon and north

IV CTZ was the Mekong Delta

The “field force” concept was used rather than the traditional “army corps” to prevent confusion with the CTZs and numbered ARVN corps. The Field Forces Vietnam (FFV,) had additional responsibilities over a corps’ normal role, which had only tactical control and combat support roles. The field force controlled US and certain allied units, fire support, aviation, combat support, logistics, and it provided advisory support to the ARVN. Additionally, field forces were provisional, and their vague designations “softened” the appearance of escalation.

The Field Forces were organized as follows:

I CTZ – Army units in I CTZ were under the control of Marine Amphibious Force III. (III MAF)  XXIV Corps was subordinate to III MAF.

II CTZ – I FFV at Nha Trang was responsible for US forces in II CTZ. 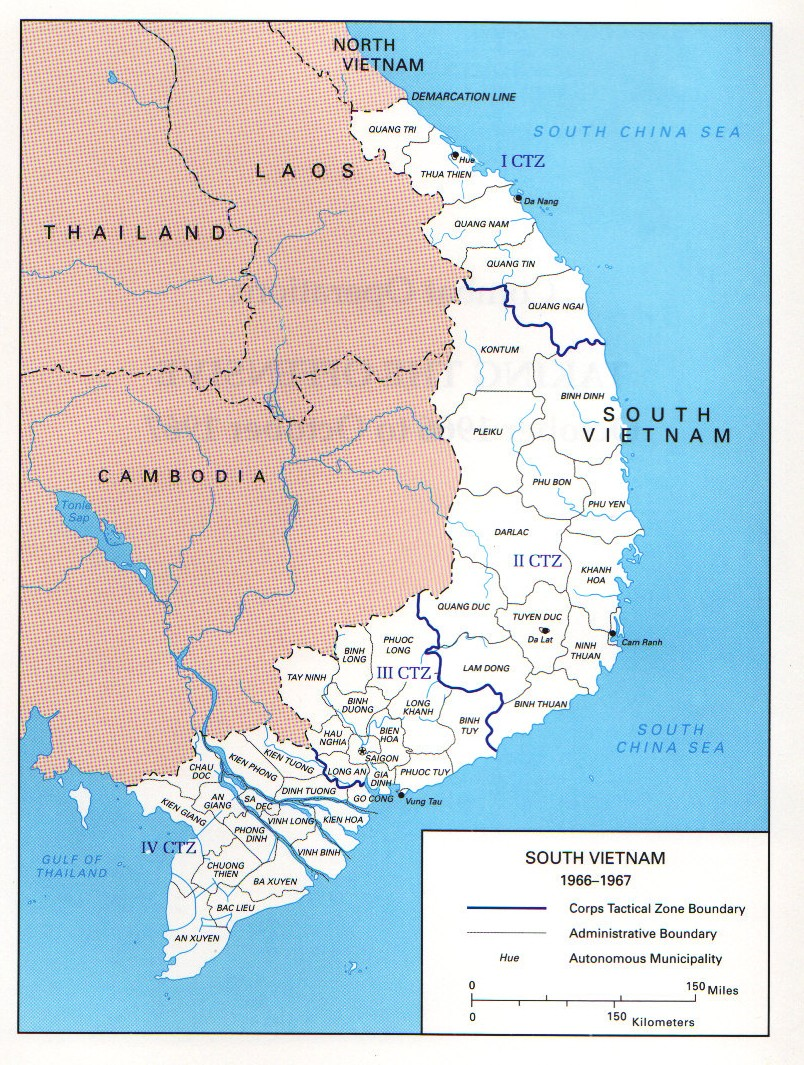 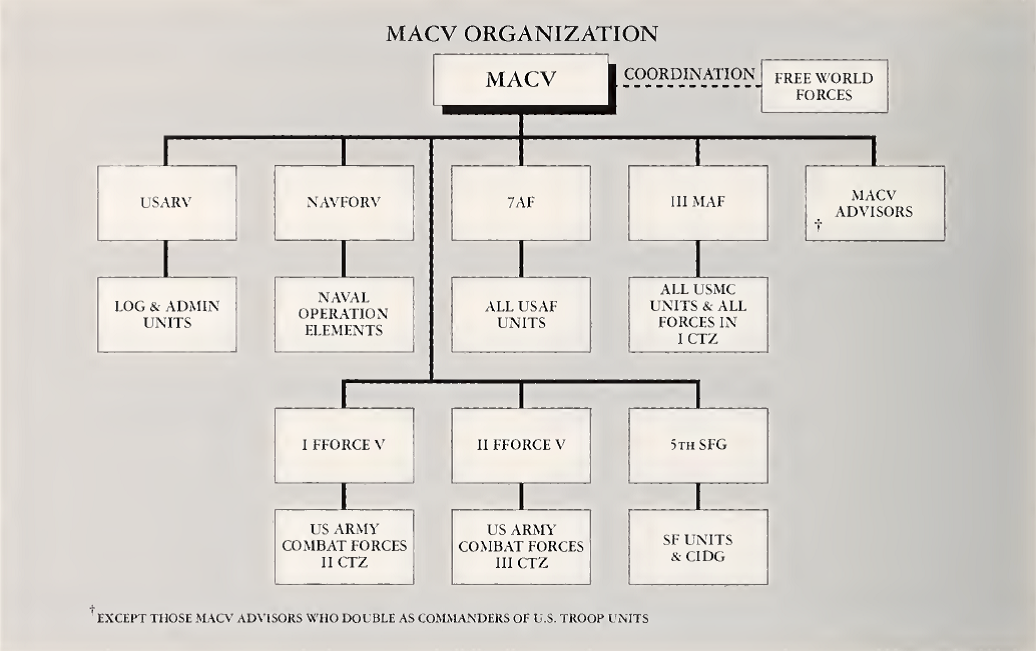 With the elimination of the Army regiment as a tactical unit, a means of preserving the lineages of company  and battalion-sized units, as well as regimental histories, was necessary. The regiment was only a paper organization providing its historical lineage to combat arms battalions and separate companies; it did not exist as an echelon of command. (The Marine Corps did not eliminate the regiment as a command echelon, but it became much like task forces or brigades in practice.)

The word  “Regiment” was not included in Army unit designations. The infantry battalions of the 1st CavDiv (Airmobile or Ambl) were designated “Cavalry” for traditional reasons but were still infantry units and did not use troop and squadron designations, e.g., Company A, 1st Battalion (Ambl), 7th Cavalry.

Branch designations, in parenthesis, followed the battalion/company designation, and not the regimental designation, because that described the battalion/company, not the regiment. Parenthesized designations, possibly two, could be spelled out or abbreviated. Common examples included: Airborne, or Abn; Airmobile, or Ambl; Mechanized, Mech or M; Combat, Cbt or C; Light, or Lt; Provisional, or Prov; Separate, or Sep. (which always followed any other parenthesized designation.) The abbreviations might be all in upper case.

Abbreviated unit designations are frequently used. Each lower echelon identifier is listed followed by a slash(/) if it is subordinate to its parent unit, or a dash (-)  to denote regimental lineage. Company C, 1st Battalion (Mechanized), 47th Infantry would be abbreviated C/1-47 Inf (Mech) or (M), and Company C (Ranger), 75th Infantry as C-75 (Rgr). In this case, the parenthesized designation is after the full unit designation. The notation, C/1/47 Inf, is incorrect because the second slash should be a dash instead. 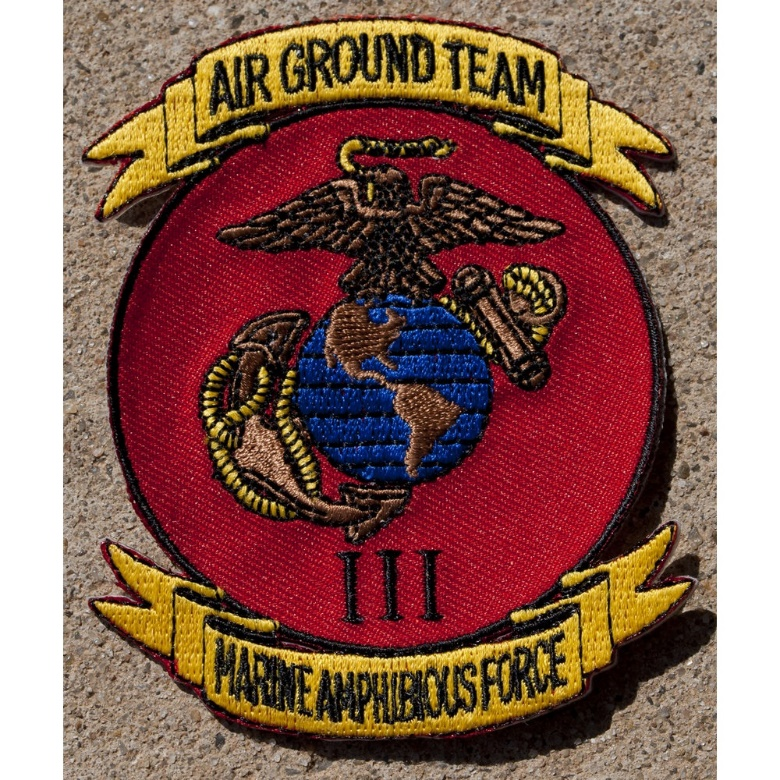 Army divisions were organized under the Reorganization Objective Army Division (ROAD). This began in 1962 with the airborne divisions reorganized in 1964, and the first airmobile division created in 1965. There were five division types: infantry, infantry (mechanized), armored, airborne, and airmobile. There were also similar separate brigades (with the exception of airmobile). The structure of the ROAD division recognized that no one standard division was capable of performing all missions. Divisions needed to be somewhat specialized, and they required a flexible structure, tailored to meet demands of terrain, climate, enemy capabilities, and other conditions. In the Campaign Series Vietnam (CSVN) US oob files, some divisions carry the ROAD tag.

Divisions had a common “division base” of command, combat support, and combat service support units. They were internally organized and equipped differently depending on the type of division, e.g., the mechanized and armored divisions’ bases were virtually identical, and the infantry divisions’ very similar. The airborne division’s base was similar to the infantry’s as was the airmobile division’s, but both were organized, equipped, and augmented with additional, specialized units to accommodate their means of transportation and delivery. The division base consisted of the division HHC, three brigade HHCs, division artillery (DIVARTY), division support command (DISCOM), and divisional troops.

Division combat elements, like DIVARTY will be described in more detail in coming articles. But common to all divisions was the DISCOM. This included an HHC, band, maintenance, supply, transport, medical, and an administrative company. Airborne and airmobile divisions had a supply and service battalion rather than supply and transport. The airmobile division also had a transportation aircraft maintenance and supply battalion. Divisional troops directly under the division HQ included the armored cavalry squadron; engineer combat, signal, and aviation battalions; and a military police company. Elements could be attached to the maneuver units. 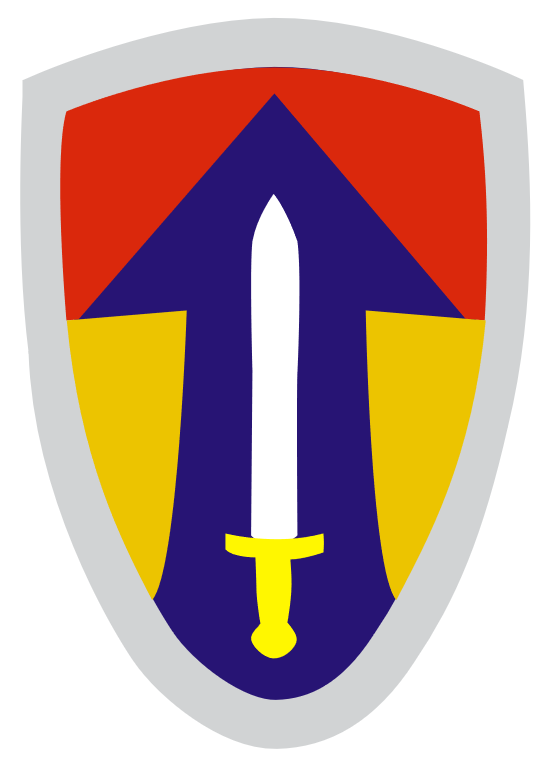 The US Army had standard tables of organization and equipment, (TO&E). These existed for divisions, brigades, battalions, and companies. For example, the TO&E number for a 1966 Airmobile division, was  67T. For a light infantry brigade, it was 77-100T.  An airmobile infantry battalion had TO&E 7-55T. These TO&E identification numbers are included in many of the Campaign Series Vietnam oobs.

Although authorized strength and equipment according to TO&Es  is useful for understanding unit compositions, the reality was vastly different. Units were habitually understrength, with shortages of officers, NCOs, and specialists particularly common. It was not unusual for rifle companies to be as low as 50 percent strength. Some weapons were withdrawn, especially recoilless rifles, and mortars were reduced. Other weapon types were increased. 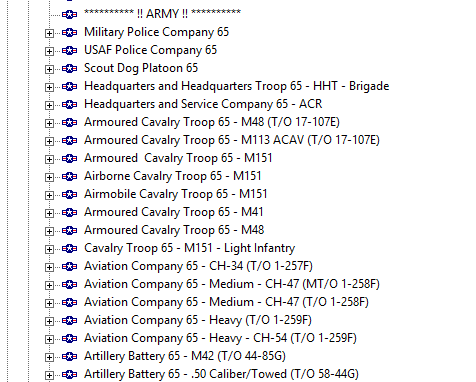 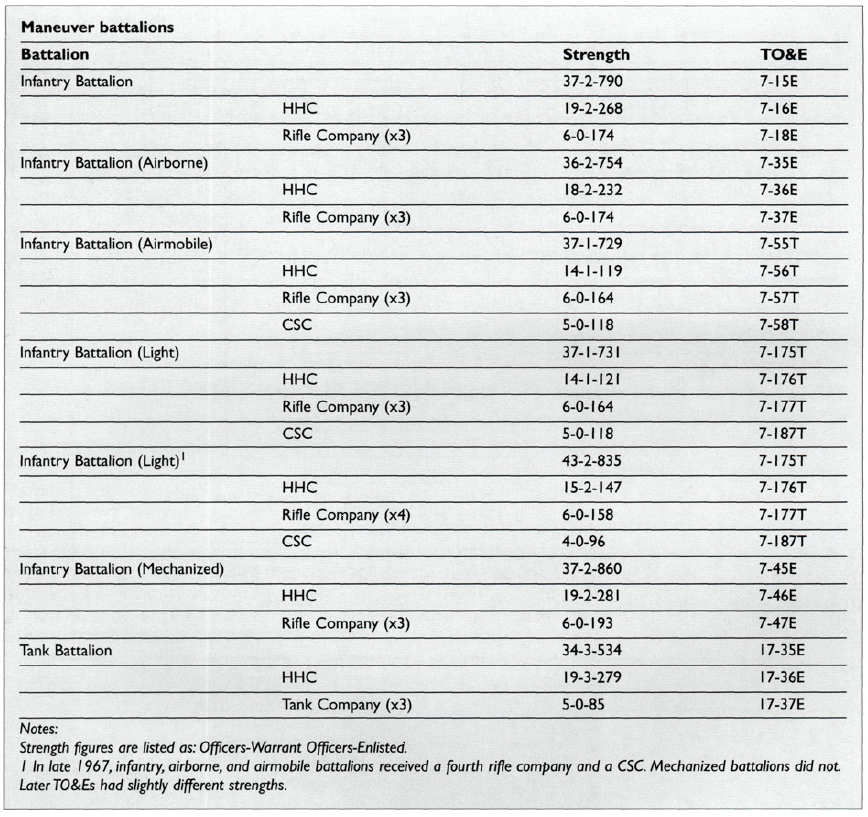 The US military and its allies, Australia, South Korea, and Thailand had vast and varied forces to fight the Vietnam War. There were many organizations, with liberal staffing available. The logistics alone was massive endeavor. In order to control all the assets and resources required a huge bureaucracy. This often led to duplication, confusion, and waste. Command structures described here should be useful to Campaign Series Vietnam players in understanding OOBs. 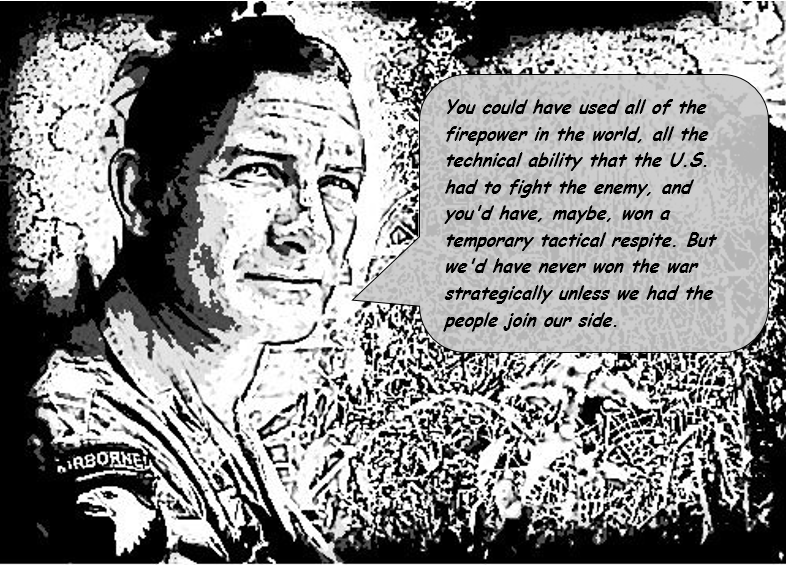