As I am sure you know, helicopter airmobile forces were developed during the Vietnam War. This article provides an overview of this development, and its organization and execution during the war.

Cradle of the “Chopper”

It all began with Igor Sikorsky, who designed and built the VS-300 helicopter in 1939. It was too primitive for combat in WWII, and improved versions saw only limited use in the Korean War. But in 1954, Major General James Gavin, 82nd Airborne Division commander in WWII, wrote a Harper’s Magazine article, “Cavalry, and I Don’t Mean Horses.”  This inspired Army leadership to develop a tactical doctrine for helicopters in combat.

The Rogers board was formed in 1960 to match aircraft industry proposals with Army needs. The Bell XH-40 design was one of the utility helicopter proposals considered that eventually became the UH-1. In 1962, Robert McNamara pushed for major advances in tactical mobility and aerial combat capabilities. The Howze Board started a testing and evaluation program for all aspects of airmobile unit organization and operations.

The Army had a  challenging vision for the “airmobile division.” Rapid movement to key areas over any terrain could deliver fresh troops for immediate combat. Rapid, high intensity operations could be maintained, and it could respond quickly to tactical situation changes. The force could disengage, and move swiftly to fight at another point, a considerable distance away. As the enemy presented opportunities, these could be promptly exploited. Movement over rivers, swamps, mountains, jungles, or areas of destruction and contamination was feasible. Extensive aerial fire support was available, and the division could support itself logistically with organic aircraft.

The organization of an airmobile division was similar to an infantry division, except that it had an aviation group, over 400 helicopters, and had fewer trucks and other vehicles. Heavy equipment items, particularly engineering ones, were replaced with lighter equipment. The composition of an airmobile division is shown in the following table. The first airmobile division was the 1st Cavalry Division (Airmobile) which was built from assets of the 11th Air Assault, 2nd Infantry Division, and the 10th Air Transportation Brigade. It was deployed to Vietnam in August, 1965. 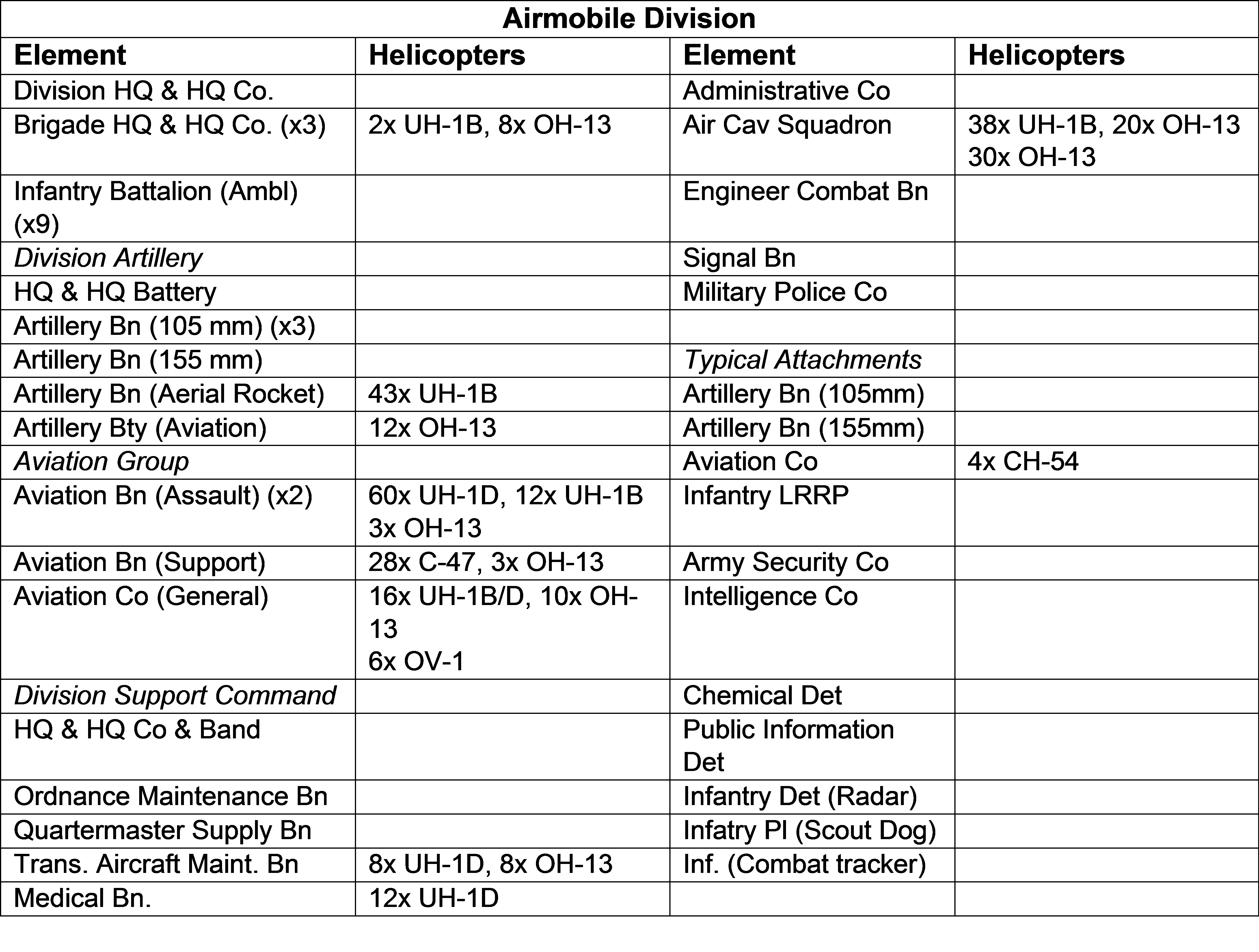 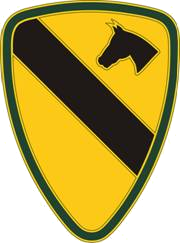 The battalion structure of airmobile infantry was very similar the regular versions, except for heavy weapons. The regular 4.2 in. mortar platoon was replaced by 81mm mortars. The airmobile rifle company had 164 soldiers vs 174 for regular infantry. The 106mm recoilless rifles were omitted for airmobile companies. Airmobile rifle companies had a headquarters, three rifle platoons, and a weapons platoon. Naturally, these were trained for helicopter operations.

Rifle platoons were armed and organized with 44 men. The platoon headquarters had a platoon leader, platoon sergeant, and an RTO. The three ten-man rifle squads consisted of a squad leader and two fire teams (Alpha and Bravo) with a team leader, an automatic rifleman, and a grenadier. One team had two riflemen and the other had one. The 11-man weapons squad had a leader, two machine gunners and assistants, two antitank gunners and assistants, and two ammunition bearers.

Battalions had variations, however. When the 1st CavDiv deployed to Vietnam, most of its battalions reorganized their 106mm RCLR (recoilless rifle) antitank platoons as machine-gun platoons with M60s and reassigned the weapons carriers to other duties. This allowed the crews to reinforce firepower with a usable weapon. One battalion, however, the 2-7th Cavalry, simply armed the crews with M16 rifles, and each man carried two or three light antitank weapons (LAWs), which added little to unit firepower. These platoons disappeared as manpower dwindled.

Company weapons and mortar platoons gradually disappeared. Some companies retained one or two mortars for use in firebases. The antitank section was sometimes retained strictly as mortar ammunitions bearers, carrying three 9 lb rounds each. Other companies maintained a 12-15 man mortar “platoon” with only one 81mm, which may not always been taken to the field. If the mortars were not carried, the platoon served as riflemen. In dense jungle, there was no overhead clearance to fire mortars. In some instances, one or more mortars might be air lifted to defend a night location or temporary firebase. Often they were used only for illumination.

Certain considerations led to having a fourth rifle company. US Army, Pacific published General Order 149 on September 10, 1967 for authorization. The three-company battalion was effective in conventional linear operations, but in Vietnam more flexibility was needed. Four companies allowed one to be used for firebase defense, or as a reserve, or reaction force. These were implemented through “Company D Packets.” These were raised from recruits, officers, and NCOs drawn from stateside units plus recent OCS and Noncommissioned Officer School graduates. They were given minimal training, and deployed starting in August 1967.

The most familiar name “Huey” came from the original designation HU-1A. This was a medevac helicopter, but could carry six troops. But, there were other types of helicopters and the designations were set by the Air Force in 1948.

Series modifications were indicated by letters “A” upwards.

The Bell UH-1 series was very common in the airmobile units. The UH-1B was later fitted with two forward 7.62mm machine guns, two door guns, rocket pods, and a grenade launcher. These were mostly used as gunships. The aerial rocket artillery, (ARA) application was the UH-1C with two 24-tube rocket pods. The UH-1D became the most common troop carrier with 11-man capacity.

The twin rotor Boeing Vertol CH-47A Chinook was a medium cargo helicopter. It could sling a 105mm howitzer or carry 33 troops. The heavy lift helicopter, Sikorsky Tarhe CH-54A, was very important for moving heavy artillery like the 155mm howitzers or construction equipment, like bulldozers.

Light observation helicopters (LOH) were known as “Loaches,” but this name is mainly associated with the OH-6 Cayuse. The Bell H-13 or OH-13 “Sioux” was widely used for reconnaissance and for artillery observation. 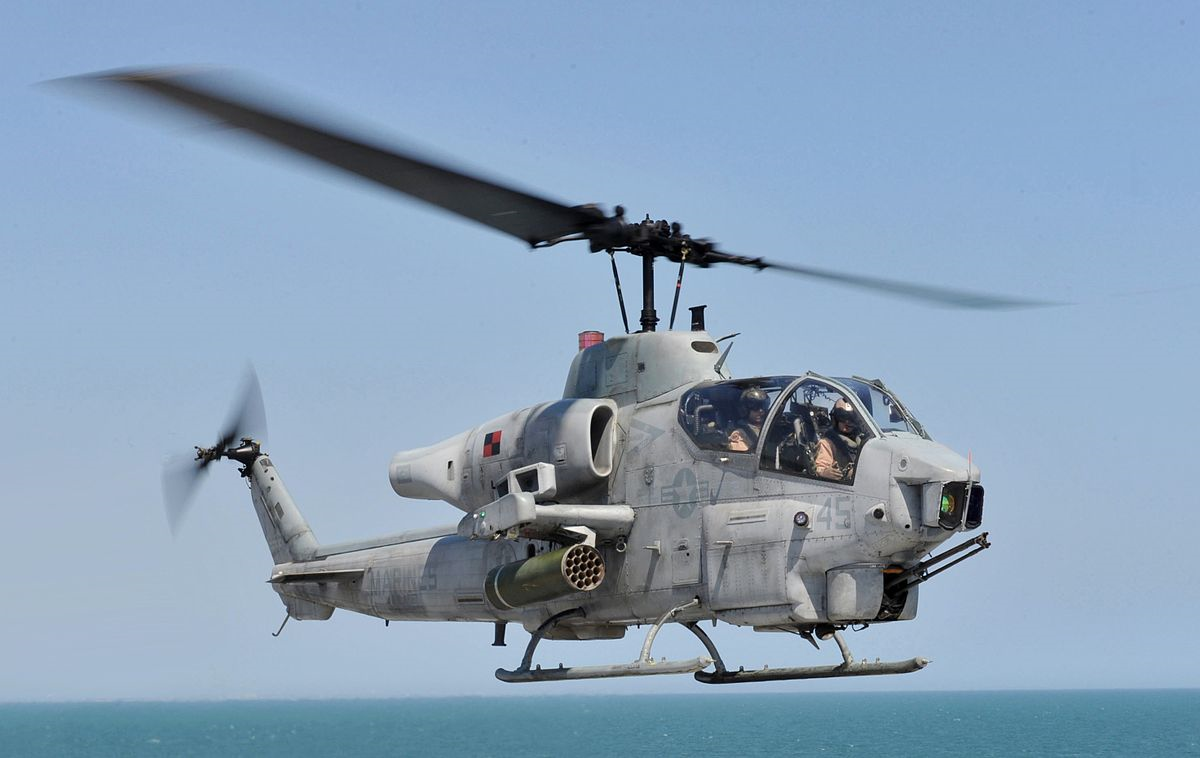 An aviation company, regardless of type had two to four platoons, and also a flight operations section.

This section’s function was to establish and operate the company heliport and assist headquarters with operational control. The company also had a service platoon with maintenance and service sections. 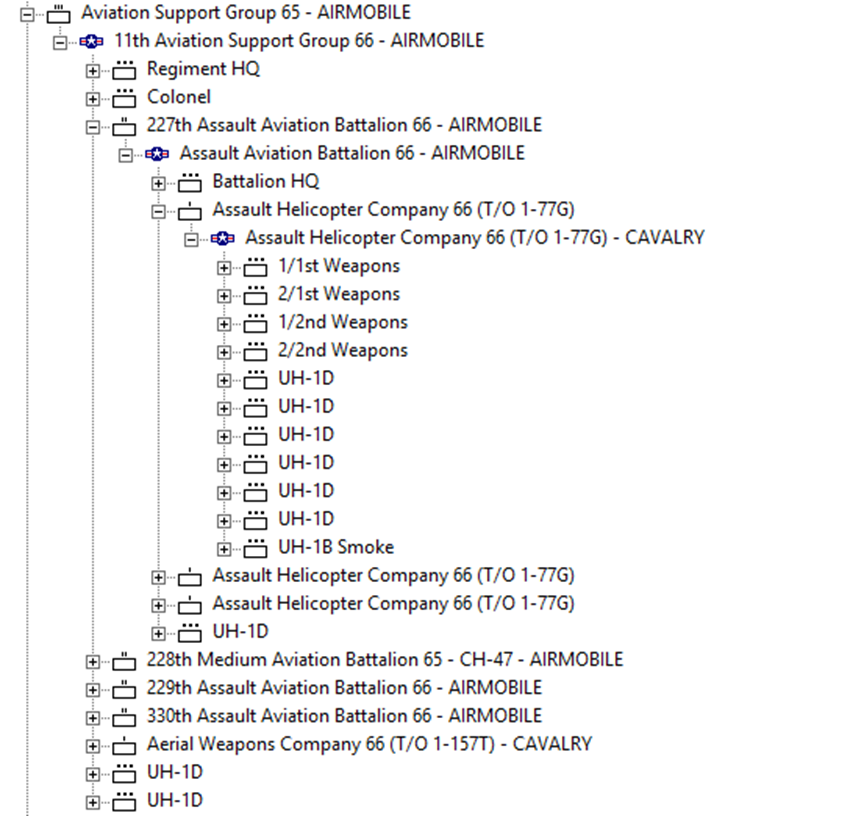 Airmobile assaults were very complex operations, and required much coordination. The basic operation was rifle company insertion. The planning begins the day before, when the mission was requested, and various units tasked.

The landing zone is selected based on the mission and objective of the rifle company. Selection was critical. Alternate LZs were designated if enemy action, or terrain made the primary on unusable. Proximity of LZs to enemy positions was also critical.

A temporary fire support base is set up on a hill top, and fires coordinated with other FSBs.

Troops load on the UH-1Ds at their assembly area. These are organized in “sticks.” The size and number of these depended on number of available aircraft, and lift restrictions imposed by air density and altitude. Excess squad members who could not be loaded on the same chopper are collected in additional sticks and landed later. Troops approach the helicopter from the nose for the pilot’s view. Avoiding the tail rotor was also critical. Entry could be on either side of the UH-1D.

Artillery preparation begins before the “lift” birds arrive. This usually lasts about ten minutes, and plotted along treelines or suspected enemy positions. The last rounds were timed to end two minutes before the lift arrives, and were signaled with white phophorus smoke.

A UH-1 command-and-control helicopter arrives on location, and serves as air traffic control.

Just prior to the lift, AH-1 gunships fire on the LZ perimeter with machine guns, rockets, and grenade launchers. They had to pull out of their run as the troop-carrying “slicks” appeared. And then, the gunships would orbit on call. Because of their ammunition load, they carried limited fuel, and could stay on station only a short time.

The flight formation might be an arrowhead or diamond, or staggered trail. The flight would land in the same formation as used in the flight. Inserting a 100-man rifle company required about 15 helicopters. But sometimes LZs were limited to land only four at a time. So the serial had to be subdivided into flights that were sized to the LZ limit. Flights could arrive in intervals as short as 30 seconds.

A low flying UH-1 lays a smoke screen along the treeline, or between enemy positions, and the LZ.

The first troop lift of UH-1 “Slicks” arrive. The passengers were alerted prior to arrival. The whole process became routine for infantrymen after a couple missions. Troops disembarked only on orders of the crew chief. If the chopper were hovering, they would swing their legs over the side and step off the skid. If unloading under fire, soldiers knew not to fire from the chopper, even if the door gunners opened fire. Of course, if there was enemy fire, the flight commander might cancel the landing.

Two further lifts were needed to deploy the whole company. 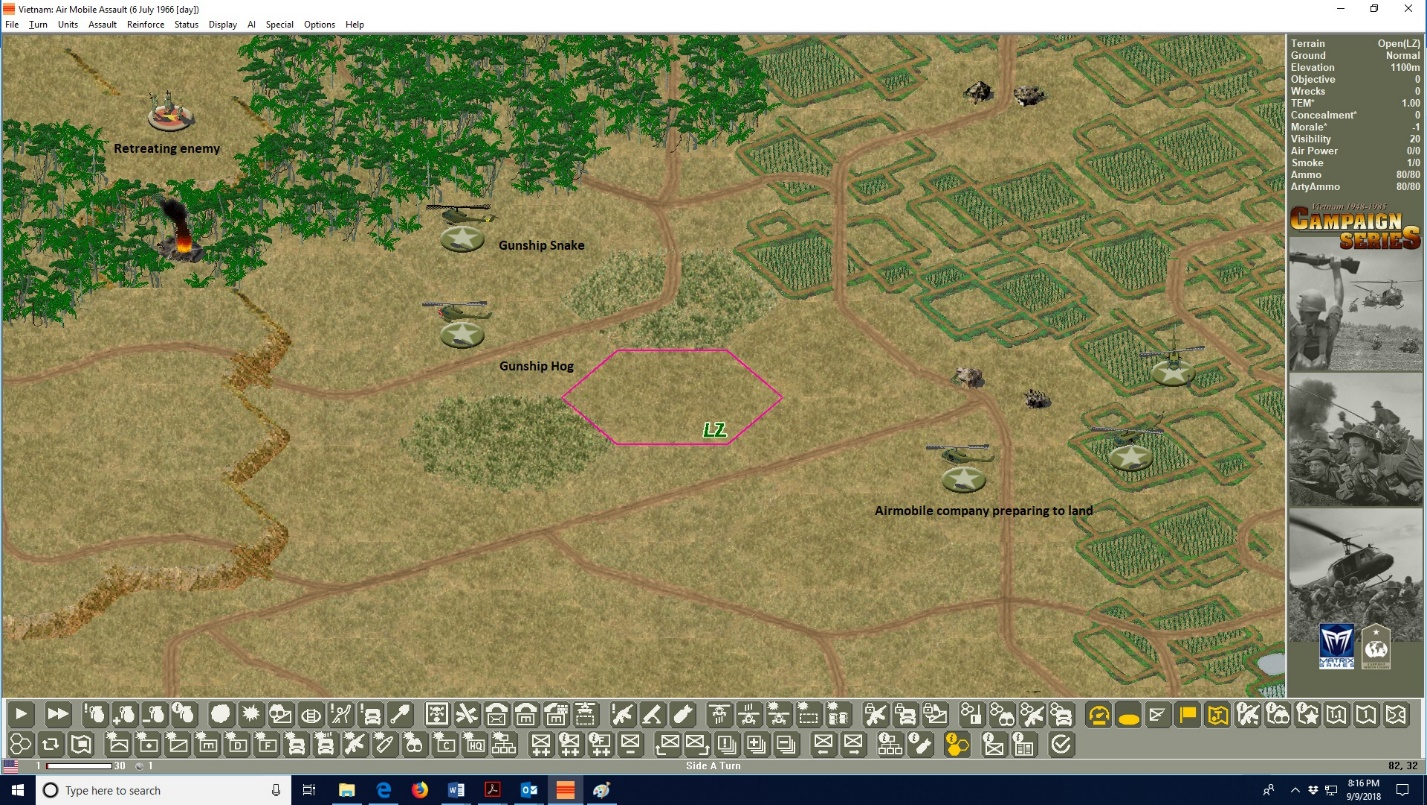 CSVN Representation of an Air Assault

Airmobile infantry was an amazing innovation in military technology. The effort to implement it was tremendous in terms of helicopter development and manufacturing, training, and devising an operational doctrine. But, it gave the Americans an added advantage in mobility and firepower. Although paratroop units did not completely vanish, large parachute operations became passé. 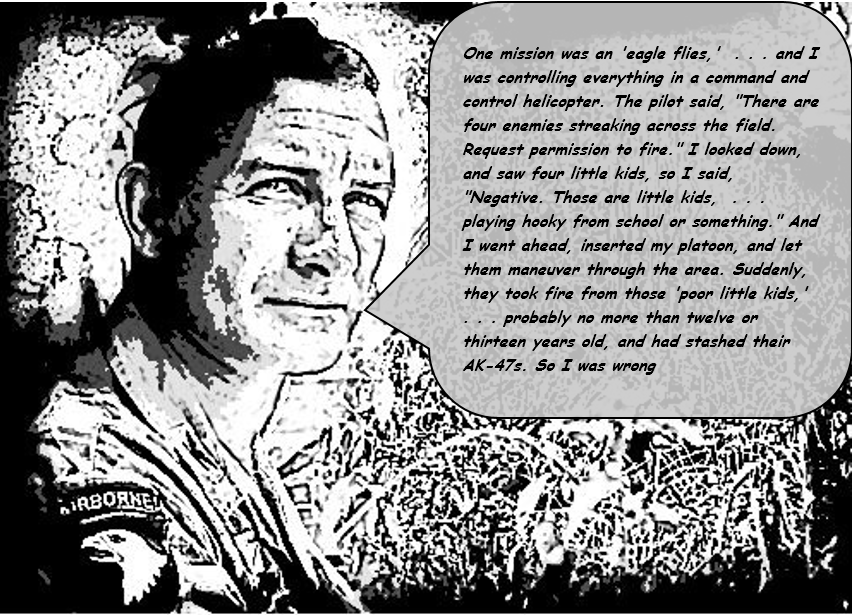