This new series of articles provides an overview of espionage in Vietnam. It includes the First Indochina War, and each article covers a different nation’s espionage services. First, the US intelligence structure will provide a framework and terminology used in the others.

Ends and Means of Espionage

Espionage is a complex subject and there are structural concepts helpful in understanding later articles. This section covers some of the “what” and “how” that spy organizations use. There are two major categories of “end” products: Intelligence and covert actions.

Information is an “end” and it seeks to know enemy military plans, troop/weapon strength, movement, and leader identification.

Counterintelligence is an end for protecting the spy network, and includes identification of informants, press leakers, and maintain of secrecy.

Some of the means for counterintelligence are: Communication surveillance, give mark an altered document to confirm if it later appears, and encryption.

Disinformation is an “end” and some objectives are: Scandal damage control, political advantage, and diversionary actions to put the enemy on the wrong track.

Illicit funding may be an end to fund covert operations beyond government authorization.

Disabling enemy leadership might be an “end” or objective.

The means for this include: Assassination, discrediting with Kompromat or disinformation.

Destruction of critical equipment or communications might be an end.

The means: Sabotage, and radio jamming.

Kompromat may be an “end” to control a “mark,” or blackmail, or obtaining confessions.

This section explains some commonly used acronyms, like HUMINT and SIGINT in espionage.

SIGINT – Signals Intelligence: from emissions of a source, assumed to be electronic, like radio.

ELINT – Electronic intelligence from signals that are not directly used in communication.

MASINT – Measurement and signature intelligence such as electro-optical including infrared, countermortar sensors, or radiation surveys.

TECHINT – Technical intelligence gathered from analysis of weapons and equipment used by the armed forces of foreign nations, or environmental conditions.

The military has many intelligence functions within its overall organization. From the battalion level upward, there were MI staffs. At battalion level, the designator “S” is used, and followed by a “2” for intelligence. So the acronym “S2” refers to an intelligence staff or officer, at the levels of battalion, regiment, and brigade. At the level of Division and above, this designation is “G2.” ( 1 = administration and personnel, 3 = operations, and 4 = logistics) A “G” staff was headed by a  chief-of-staff.

The MI or military intelligence company (or detachment) was part of every division’s staff during the Vietnam War. This consisted of these sections: HQ, CI (counterintelligence,) OB (order of battle,) II (imagery interpretation, and Intg (interrogation.) And the disciplines of COMINT, HUMINT, and IMINT were the most common. The Army Field Manual FM 30-9 from 1968 provides this typical structure, which the TO&E  30-17 corresponds to. Of course there were variations for different divisions, but this is the generic concept.

At the corps or army level, MI battalions (TO&E 30-25,) provided specialized intelligence to a field army headquarters. The generic organization chart is shown below. 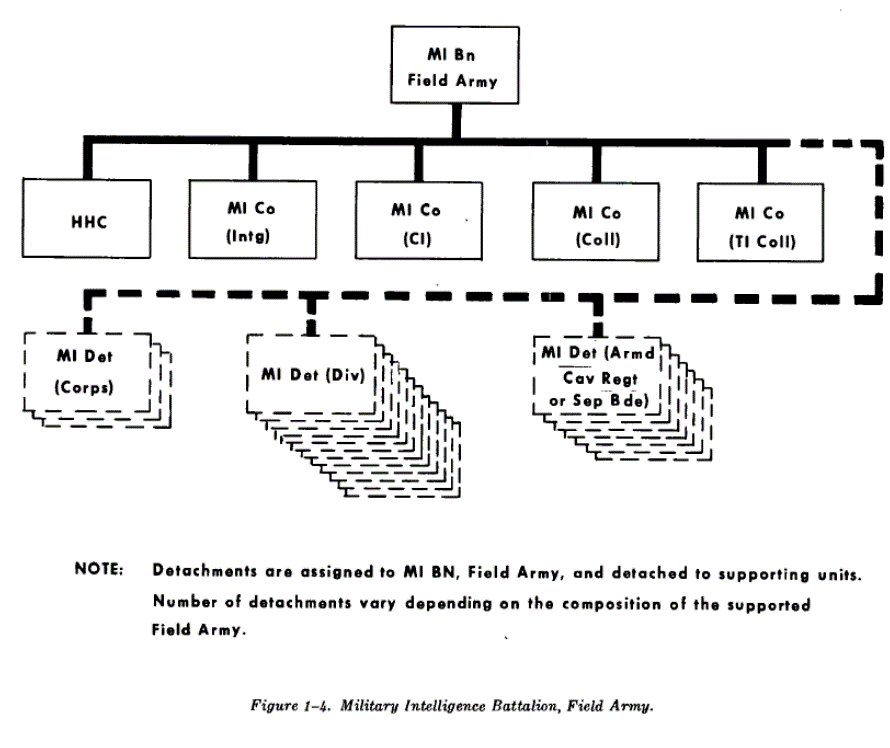 The dashed lines indicate liaison with other reconnaissance and intelligence-gathering units.

This was a high-level detachment originally stationed in Okinawa. In 1965, it went to Vietnam and was attached to the 5th Special Forces Group.

In Vietnam, much emphasis was placed on knowing the Viet Cong and NVA order of battle.

Order of battle specialists collate, evaluate, and interpret information to make order of battle charts. These specialists augment organic intelligence staff sections of commands at all echelons, from separate brigades and armored cavalry regiments, up to the MACV.

The CIA played a significant role in Vietnam, and managed the Laos “Secret War.” The station CIA office in Saigon was headed by a Station Chief, with upwards to 200 staff. Although the CIA had some liaison officers in Vietnam during the First Indochina War, the first major involvement was when Colonel Ed Lansdale went to Saigon to head the Saigon Military Mission, SMM, in June 1954. (Lansdale had been an OSS officer, and was not actually a CIA employee.)

William Colby became the Saigon station chief in 1959. He later went back to Vietnam in 1968 to run the rural pacification effort named CORDS. Part of this effort was the Phoenix Program. Colby later became the CIA Director in Washington DC. The table below lists Saigon station chiefs until the end of the war.

An overview of the CIA’s creation follows. In October 1945, the OSS was abolished. But, the need for a postwar centralized intelligence system was clearly recognized. Bill Donovan had submitted a proposal calling for the separation of OSS from the Joint Chiefs of Staff with the new organization having direct Presidential supervision.

Donovan’s plan was controversial. The military opposed a complete merger. The State Department wanted to supervise all peacetime foreign relations. The FBI wanted all civilian spy activities under its jurisdiction. So in January 1946, President Harry S. Truman established the Central Intelligence Group to coordinate current intelligence. The National Security Act of 1947 established the National Security Council and the Central Intelligence Agency.

Allen Dulles was the CIA director when the first US involvement in Vietnam began in 1954. He was followed by John McCone in 1961, and Richard Helms was director beginning in 1966. The organization evolved over the years. It had two or more “Directorates,” which were further divided into various “Offices,” or “Divisions.”

The function of counterintelligence was handled by the Office of Security, but in 1954, James

Angleton was named Chief of Counterintelligence Staff, an independent outfit. A struggle for resources between counterintelligence vs espionage and covert action continued over the years. The overall CIA organization chart for 1961 is below. The various “Stations” in each country also had a similar structure, along “office” lines, but sized and adapted to need. 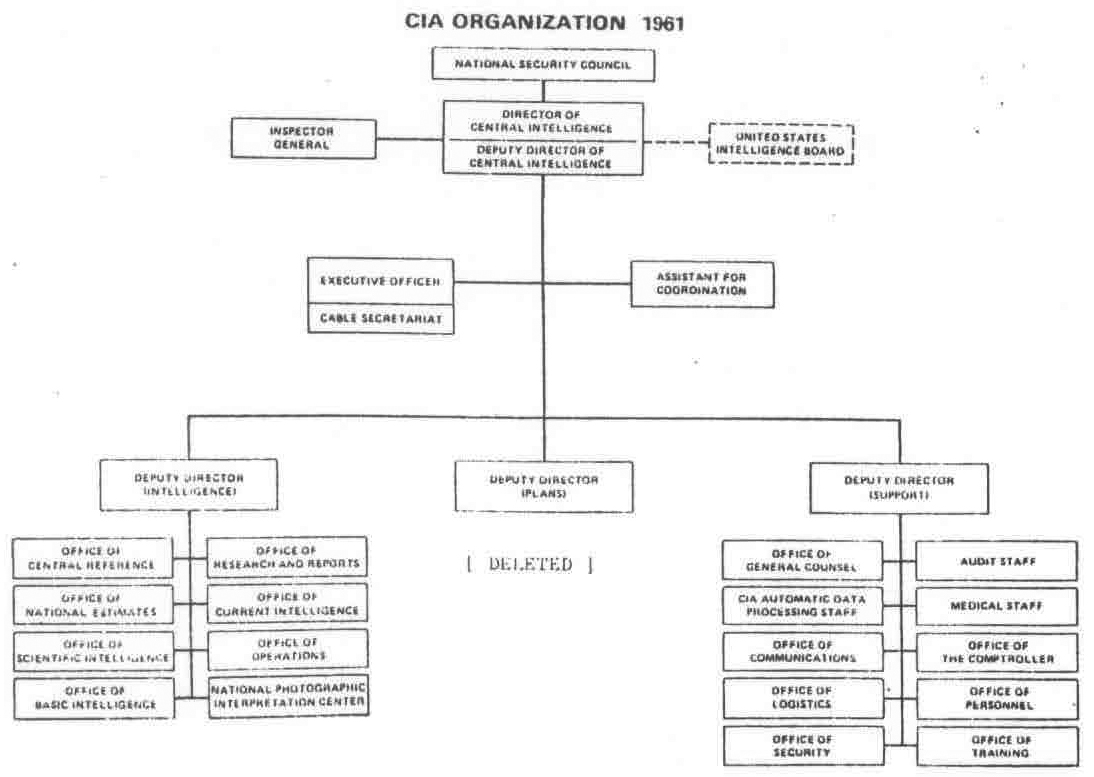 In Vietnam, the CIA had the Saigon station. Covert action was made through the 5th Special Forces Group commanded by Colonel Robert Rheault. They ran the counterinsurgency Phoenix Program, and also Operation Shining Brass for ground surveillance of the Ho Chi Minh Trail. In Udorn Thailand, Bill Lair was the Operations Chief who directed CIA support of the Hmong forces in Laos.   For overview information on these, see CS Legion articles: HHH#12 Vietnam Counterinsurgency, UHH#11 Truong Son Ground Combat, and TPO#5 CIA in Laos.

As an example of spy intrigue, the “French doctor case,” was a successful CIA counterintelligence operation that uncovered a Soviet spy in Saigon. It also illustrates the “feud” between William Colby and James Angleton over counterintelligence vs regular espionage.

In 1972, the CIA learned about a Soviet spy in Saigon when it intercepted coded radio broadcasts. A signal direction-finding analysis showed they were coming from a Soviet-style transmitter, and beamed straight to Moscow. A long and arduous counterintelligence investigation zeroed in on the transmission point: The home of Dr. Pierre Hautier, a Saigon resident the early 1960s.

Hautier ran a tuberculosis clinic, and was a medical university lecturer. His Vietnamese wife was related to Lt. Gen. Dang Van Quang, special assistant for military and national security affairs for President Nguyen Van Thieu. So, he had some access to Vietnam military information.

Apparently, the French embassy assisted in the investigation and the DST (Direction de la Surveillance du Territoire,) arrested Hautier as he handed a package to Soviet Embassy Vladimir Nesterov. The package, contained intelligence reports the doctor had written on “The political and military situation in South Vietnam.” Caught “red-handed,” Hautier confessed. The French government then expelled Nesterov and two other Soviet officials involved in the case, Georgy Sliuchenko and Viktor Aleksandrovich Sokolov, declaring them persona non grata.

However, when James Angleton learned of this, his staff investigated and questioned William Colby. Colby had been a social acquaintance of the doctor back in the early 1960s. Colby told Angleton’s men that he barely remembered the doctor, and had not bothered to file a report on their innocuous dealings. But, Angleton started a file on Colby, which must have rankled him greatly.

The US had a massive and sophisticated intelligence program, both military and CIA. They ran a fairly successful counterinsurgency program, Phoenix, and had extensive intelligence on the Communist orders of battle and so forth. Ho Chi Minh Trail surveillance was a massive effort.

“A Soviet Spy in Saigon: The Case of the French Doctor,” Merle Pribbenow

There was a spy for the North Vietnamese that was never caught. He was Pham Xuan An, a Vietnamese that lived in Saigon. He was well educated, and had traveled to the United States, studying journalism at Orange Coast College in Costa Mesa, California. When he returned  to Saigon, he got a job with Time Magazine as a journalist. He became friends with many Americans, including acquaintances with such notables as CIA’s Lou Conein, Col. Edward Lansdale, and William Colby. 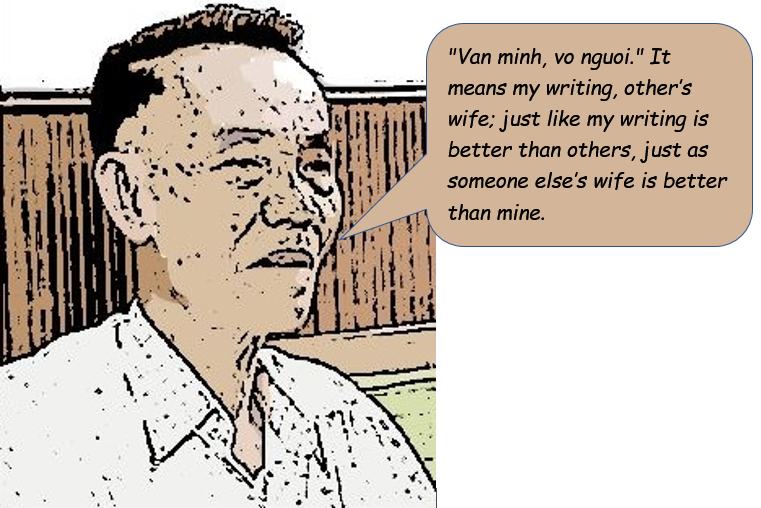