hạm Xuân Ẩn’s Notepad is the latest series of articles by David Galster that provides an overview of espionage in Vietnam. The articles provide some interesting background information for the upcoming release of Campaign Series: Vietnam.

Would you believe when North Korea hijacked the USS Pueblo, that it played a key role in Soviet espionage in the Vietnam War? This article describes the Soviet KGB, and how one of its big intelligence exploitations helped North Vietnam against American air campaigns.

The Soviet Union had a strong spy program dating back to the Bolshevik days of Felix Dzerzhinsky’s Cheka. The KGB, (Komitet Gosudarstvennoy Bezopasnosti) which means “Committee for State Security,” was a 1953 reorganization and renaming of its predecessor, MGB. It was distinct from the military reconnaissance and intelligence group, the GRU (Glavnoye Razvedyvatel’noye Upravleniye,) which means “Main Intelligence Directorate.”

The Russian word “razvedka” means reconnaissance and intelligence with a combined meaning. The Soviets term, “razvedka,” describes all actions necessary for a better understanding of the enemy. The English language, applies distinct meanings to “reconnaissance ” and ” intelligence,” describing  information collection and analysis as separate entities. Soviet and US terminology differ more than just semantically. The Soviets view razvedka as a single process, encompassing actions at the lowest level, as well as highly sophisticated analysis at the national level to gather and process information on enemies. 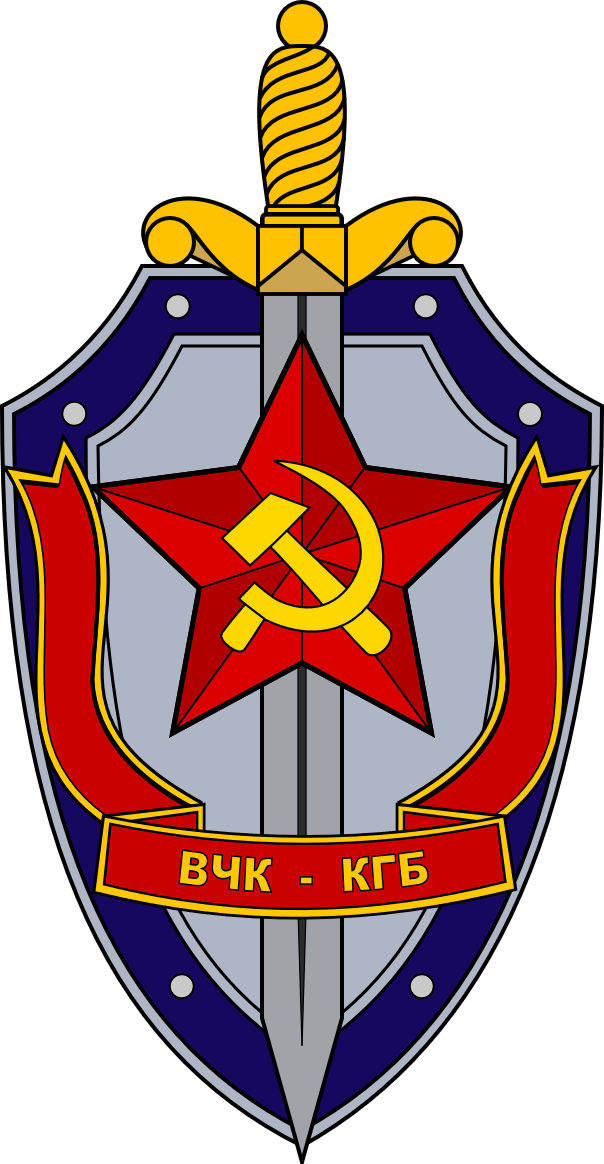 One such Service within the FCD was “Service A” for Aktivnyye Meropryatiye, or “Active Measures.”

For foreign locations, the Soviets had a “residency” (rezidentura) organization, analogous to a station in the CIA. These would be associated with the Soviet embassies or consulates. A residency was divided into two staffs, operational and support. The table below shows the generic residency organization for the FCD. A “line” is a section or small group of just a few people. The total would be on the order of 40 people, but this would vary depending on need. 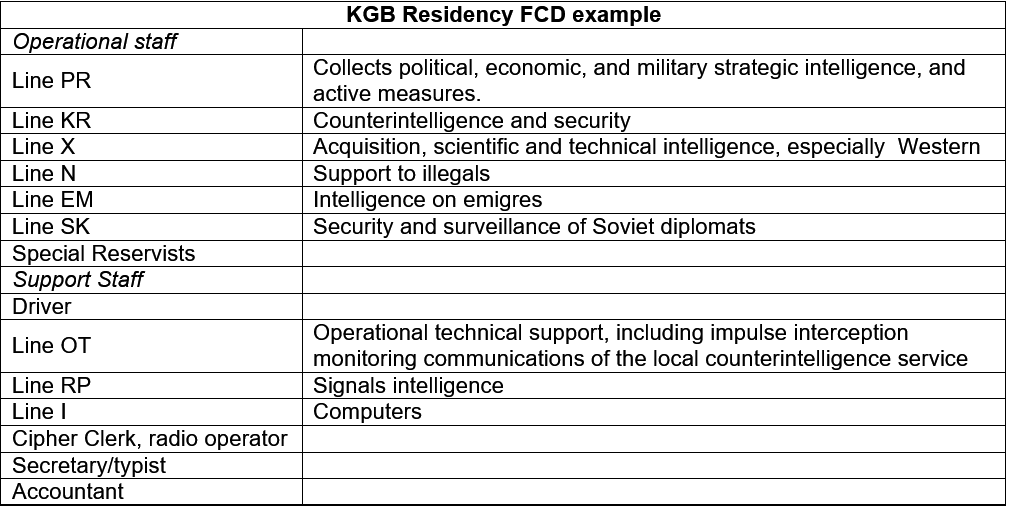 Espionage relating to the Vietnam War was covered mostly by the First Chief Directorate. The Departments that were most involved were the First Department, for US surveillance, the Sixth Department, which included Vietnam and China, and the Sixteenth Department, dealing with SIGINT and codebreaking. 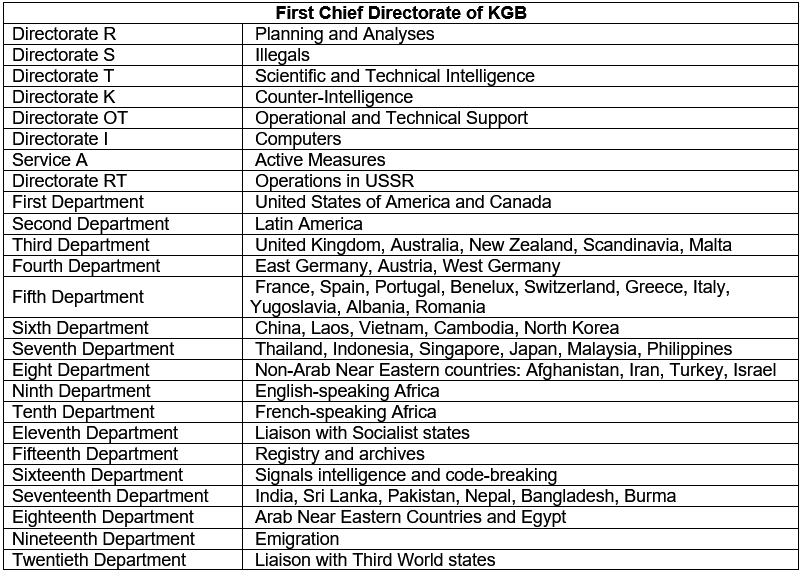 During most the Vietnam War, the Head of FCD was Aleksandr Sakharovsky. The Head of the US Residency was Boris Aleksandrovich Solomatin, 1966–1968. He was involved in exploiting the “Walker spy ring.”

The Soviet Union was ever watchful over the fledgling Communist movement in Indochina, and although no official contact or relationship existed with the Viet Minh, KGB probably provided at least one piece of intelligence shortly before Dien Bien Phu. According to General Vo Nguyen Giap, in September 1953, the Chinese delivered a copy of the French strategic plan, called the Navarre Plan (named for the French Commander-in-Chief Henri Navarre), complete with a map, that a “friendly” intelligence agency had obtained. The speculation is that, given the KGB’s extensive spy network inside the French government, military, and intelligence services at that time, and with China’s capability so new, it seems probable that the Navarre Plan was acquired by Soviet intelligence, and then given to the Chinese for passage to the Viet Minh.

In 1955, the Vietnamese Ministry of Public Security asked the Soviet KGB for a small amount of electronic equipment for the establishment, on a trial basis, of a radio intercept (SIGINT) unit. The KGB sent a team of specialists to select the best radio intercept sites, and to train Vietnamese personnel.

The experiment was successful, and 1959, North Vietnam asked the KGB for further assistance in establishing a large “radio counter-espionage and radio intelligence” program. The KGB responded enthusiastically, providing funding, equipment, and training for the construction of what was called Project “Vostok,” which was completed in 1961.

A team of Soviet electronic warfare specialists were dispatched to Vietnam along with equipment for an ELINT battalion. The Soviet specialists spent three months in Vietnam, setting up the equipment, detecting and analyzing American jamming signals, and training Vietnamese on operation.

When the Soviets left, they turned their equipment over to a newly-formed Vietnamese ELINT unit. In 1968, the Soviet Union sent a second shipment of electronic equipment that enabled the Vietnamese to expand its unit into a full ELINT battalion. This unit was called the 8th Jamming Reconnaissance (Trinh sat nhieu) Battalion, and was focused on detecting, studying, identifying, and exploiting American electronic jamming signals, especially from B-52 bombers. The information obtained by this unit played a key role in countering US Operation Linebacker II, the 1972 Christmas bombing campaign.

John Walker was a US Navy sailor who joined in 1955, and became a radioman. After some surface fleet assignments, he went to submarine school and became qualified. Assigned to the USS Razorback (SS-394,) he received top-secret crytographic training.

By 1963, Walker had advanced to Chief Petty Officer, and was in charge of the radio room on the USS Simon Bolivar (SSBN-641,) a nuclear ballistic missile sub. He was qualified for cryptographic equipment maintenance at that time, and later became a Chief Warrant Officer.

Suffering from financial difficulties, and perhaps motivated by greed, Walker decided to balance his checkbook, by leaking top secret information to Moscow. He photocopied a document at his shore- duty station, Atlantic Submarine Forces HQ in Norfolk, and slipped it in his pocket. The next day, he drove to Washington DC, walked into the Soviet Embassy, and asked to see security personnel.

Yakov Lukasevics, an internal security specialist at the embassy, was unsure what to do with the American who came bearing documents. He telephoned Boris A. Solomatin, the KGB rezident chief.

After studying the situation, and consulting with other KGB officials, Solomatin assigned Oleg Kalugin, his deputy for political intelligence (Line PR,) as Walker’s handler. Kalugin carefully selected a “dead drops” location for Walker to deposit document packages, and pick up cash and instructions.

The information Walker provided was the cryptographic key for KW-7 encryptors.  The cryptographic key is a long random number used to encrypt a message. The KW-7 was a gray box, weighing about 34 kg. The internals consisted on a combination of vacuum-tube and transistor technology, and in 1967 it was the most widely used encryptor in the US inventory.

The US military changed cryptographic keys every 24 hours, and so Walker provided the KGB with future key lists so they could continue to break the code. Walker also provided a huge array of other secret Navy and US documents. These included operational orders, war plans, technical manuals, and intelligence digests. The KGB devised and furnished its spy with an electronic device that could read the KL-47 (a later encryptor,) rotor wiring, and gave him a miniature Minox camera. At Norfolk, he used his status as a courier to smuggle documents from headquarters to his officer quarters room, where he photographed them.

Now the KGB could decode all radiograms transmitted from the carriers like the USS Enterprise, and other ships year round. They deciphered more than a million messages, to obtain data from the most modern American encryption equipment available. The commander of the Atlantic Fleet, Admiral Isaac K. Kidd was alarmed by actions of Soviet submarines, which during exercises, moved as if reading the messages of American ships.

The impact was critical in the Vietnam War. The KGB could provide the North Vietnamese with any communications regarding strategic bombing. Most messages between carriers on Yankee Station and MACV were intercepted, and North Vietnamese knew where B-52 bombers would strike.

Finally, the end for John Walker came when FBI agents arrested him after confiscating 127 classified documents left at a dead drop. A search of his home turned up plentiful evidence of the spy ring, including records of payments to Jerry Whitworth, who turned himself in a few days later. Brother Arthur was also arrested. The spy ring was caught only because John Walker’s ex-wife reported him to the FBI in a fit of drunken spite over unpaid hush money.

Walker led one of the most devastating spy rings ever unmasked in the United States. He and the spy ring compromised US Navy cryptographic systems, and top-secret information from 1967 to 1985.

The KGB was a very extensive spy organization with vast capabilities and resources. They had redundant organizations at virtually every level, and had very large staffs with highly trained and motivated personnel. The helped the North Vietnamese in a very significant way with SIGINT, and cryptography.

“The Soviet-Vietnamese Intelligence Relationship during the Vietnam War: Cooperation and Conflict,” 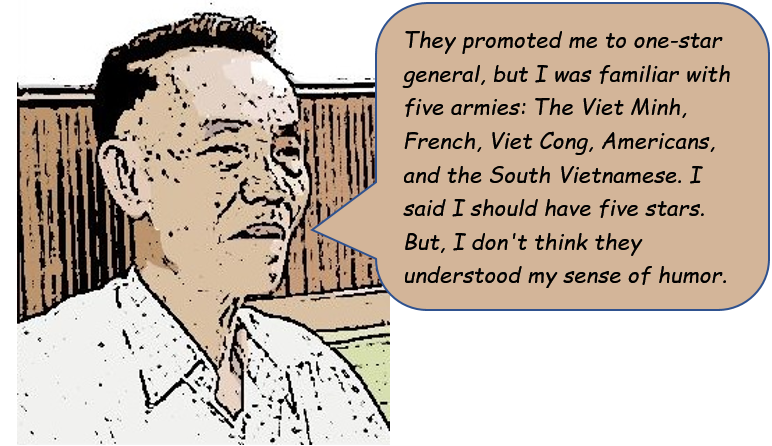