The South Vietnamese, or the Republic of Vietnam had many different organizations related to intelligence work. Naturally, ARVN had military intelligence functions. The National Police were also involved with many aspects of surveillance and intelligence-related activities. There were other  government-sanctioned ones, such as the organized-crime outfit, Binh Xuyen. Finally, there was a secret spy organization known as the Department of Social and Political Services, serving directly under the President. This article provides an overview of these, and the key figures that led them.

The South Vietnamese Army, ARVN, had a military intelligence structure similar to the US. They even used the staff nomenclature S2, G2 etc. like the US. The G2 of an ARVN Division was a South Vietnamese officer with an American adviser. Naturally, South Vietnamese personnel gathered most of the field intelligence, and made early assessments. Unfortunately, it was common practice for ARVN commanders to assign their less talented officers to G2 and S2 duties.

Generally, senior South Vietnamese officers relied heavily on American-supplied intelligence. This tended to discredit their own indigenous efforts. Brig. Gen. Giai even demanded that his G2 provide him only with US weather data. The trend of Saigon’s generals was to view high technology as primary, and that Americans provided the best high-tech intelligence. This resulted in ARVN commanders relying more on electronic and other US intelligence data. They tended to give lower priority to visual reconnaissance or interrogations, although in many situations, these were more useful.

During the First Indochina War, the Vietnamese government under Bao Dai had a police force known as the Surete Federale. The French had created it during WWI. It closely tracked activities of Vietnamese anti-colonialists, communists, and nationalists inside and outside of French Indochina. It was considered to be highly effective. It operated under Japanese occupation during WWII until March 1945, when the Japanese disbanded them.

When the French returned in late 1945, they rebuilt the civil police and security forces. (Service de Surete de la Cochinchine) However, Surete would not regain its former effectiveness. When the former emperor Bao Dai was named Chief of State for Indochina in 1949, the French transferred control of the police force portions of Surete to his government.

The more sensitive parts of Surete were kept under French control. These included the “territorial surveillance,” military security, 5th Section in charge of postal and telegraph communication, and the equally secretive “Police speciale.”

The new South Vietnamese government under President Ngo Dinh Diem took these related police forces of Surete and Saigon Municipal Police, to create the National Police in 1962. This is known to the Vietnamese as CSQG. (Canh sat Quoc gia)

Initially, the National Police Force only had only 16000 uniformed and plain-clothes agents. It was basically an urban constabulary with no rural component to counter the Viet Cong threat. However, its numbers grew and in 1971, it had over 103000 personnel.

American GIs often referred to the National Police as “White Mice,” because of their white uniforms, helmets, and gloves. And, American servicemen were wary of the “White Mice,” because on a Saigon weekend, troops wanted liquor, women, and a good time while the police wanted to preserve the peace. Many times, taxicabs with a soldier and Vietnamese girl were stopped by police demanding identification and a “cohabitation certificate.” These were not legal stops, and the police were often looking for bribes.

General Nguyen Ngoc Loan was the head of the National Police. His image in an iconic photograph, snapped just prior to shooting a Viet Cong, is famous. The National Police indeed worked hard to counter the Viet Cong. Police were usually the first to be notified of Viet Cong raids, and the first to respond to the scene.

They had a “Public Safety” program which was a major effort to check all products being brought into certain areas. Police searched for illegal items, weapons, currency, and of course the occasional Viet Cong of Vietnamese military deserter without proper identification.  Propaganda leaflets depicted policemen checking items at a bus stop. 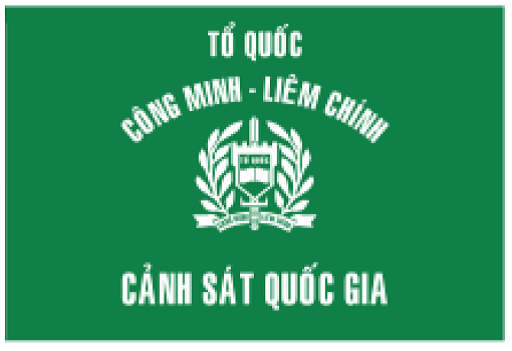 The Police Special Branch was the core of Operation Phung Hoang. (Called Operation Phoenix, by the CIA)  It was basically a counterinsurgency effort to collect intelligence data about the Viet Cong infrastructure. In the first 11 months of the 1968 campaign, Operation Phung Hoang resulted in 13404 Viet Cong cadres being rooted out of their underground positions in the communist movement. Under Phung Hoang, the National Police and other government intelligence agents manned district centers which collected data, checked information against files and dossiers, and where warranted, arranged for operations. This effort is also discussed in the CSLegion article, HHH#12 Vietnam Counterinsurgency. 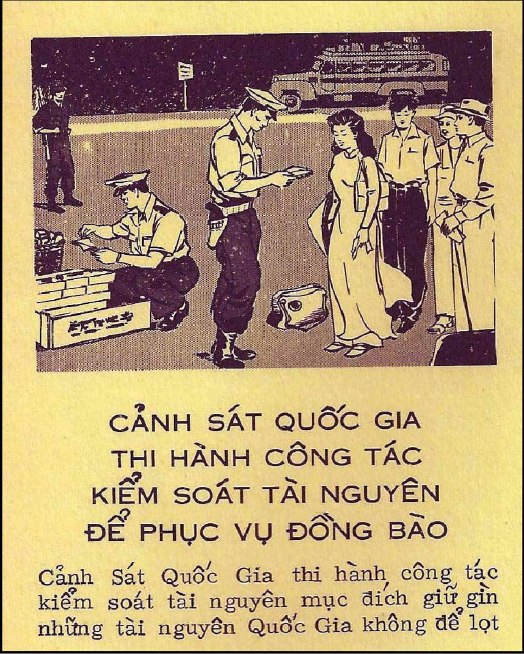 A “mercenary” outfit involved with intelligence and covert operations during the First Indochina War was the Binh Xuyen. They primarily operated in the Saigon area, and had been a crime organization since the 1920s. In 1949, the new Vietnamese Chief of State, Bao Dai authorized them as an independent paramilitary organization within the conventional army. Bao Dai did this because Binh Xuyen was  anti-communist, and the Vietnamese National Army was weak and needed support.  Bay Vien, leader of Binh Xuyen was given the rank of Major General of the Vietnamese National Army.

The Binh Xuyen divided its receipts with Trinquier’s GCMA and Col. Antoine Savani’s 2e Bureau of South Vietnam. (2e Bureau au Forces Terrestres du Sud Vietnam) Surplus opium was sold to Chinese merchants for Hong Kong export, or to Corsican criminal syndicates for shipment to Marseille. GCMA deposited its portion in a secret account, and when Touby Lyfoung or other Meo tribal leaders needed money, they flew to Saigon and personally drew cash from the “caisse noire,” or black box.

French officials gave Bay Vien free rein in Saigon and Cholon, provided that he wipe out the city’s Communist infrastructure. Bay Vien had vast knowledge of the Viet Minh in Saigon, through his network of agents. This, and his strong desire to fight Communism, enabled Binh Xuyen to destroy Viet Minh forces there in a very short time. The French rewarded Bình Xuyen’s success by allowing Bay Vien to monopolize the trucking industry in South Vietnam, and allowing him to to operate as a warlord.

By 1955, when the French were leaving, Bình Xuyen had five regular battalions, and two battalions of public security shock troops. (Cong an xung phong) But, in an intriguing rift between Bao Dai and Ngo Dinh Diem, the Vietnamese National Army, under Duong Van Minh, basically wiped out Binh Xuyen in Operation “Rung Sat.”

Department of Social and Political Services

President Ngo Dinh Diem had a secret service at his disposal. It was organized in the late 1950s with the help of his brother, Ngo Dinh Nhu, who appointed Tran Kim Tuyen as director. The organization was given the innocuous name of “Department of Social and Political Services,” (So Nghien cuu Chinh tri Xa hoi,) but in reality, it was a secret spy organization that had about 500 personnel.

Tran Kim Tuyen was from North Vietnam in the Ninh Binh Province, and he had studied law and medicine in Hanoi. As a Catholic, he rejected the Communist Viet Minh movement’s atheism. He met Ngo Dinh Nhu by chance, when his priest recruited him as a guide. Nhu was traveling in a Catholic area, and Tuyen knew how to evade Viet Minh attention.

In 1954, Tuyen was working for the anti-communist Vietnamese Army. He persuaded a number of Catholics to move to the south to avoid Communism. He later fled himself, on a plane from Hanoi to Saigon that also had Ngo Dinh Diem aboard.

Ngo Dinh Nhu became a mentor to Tuyen and asked him to draft rules for the Can Lao, a political party. The Can Lao party was anti-communist, but was neither capitalist, (rejected materialism) but followed a philosophy known as “Personalism,” which originated with Emmanuel Mounier, a prominent French Catholic philosopher.

Tran Kim Tuyen became a liaison with the CIA and knew William Colby and Phillip Potter. In late 1956, the Department of Social and Political Services was formed. He employed propaganda techniques to “frame” rivals. He learned this from the Viet Minh. He once circulated fake copies of an anti-Diem  magazine, with Communist propaganda substituted for real content. And then, he had the government ban the news outlet for being Communist.

In 1962, Nhu appointed Tuyen and Pham Ngọc Thao, to oversee the Strategic Hamlet Program. Thao turned out to be a double agent and Communist spy. (See CSLegion article PXAN#4 North Vietnamese Espionage.) The program attempted to isolate the Viet Cong by barricading villagers inside fortified compounds, locking Communists out. Tuyen promoted the concept to the populace.

Than Kim Tuyen became unhappy with the dominant influence of Madam Nhu. Diem ordered Tuyen to take a leave of absence to rest, implying that Tuyen had become to lenient towards some disillusioned military officers. But, Diem never asked Tuyen to return to work. However, during the May 1963 Buddhist crisis, Diem asked him to come back to resolve it.

By then, Tuyen was no longer loyal to Diem, and began plotting a coup. But, he was unable to get the cooperation of the generals, because of his closeness to Nhu. After that, Nhu assigned Tuyen as ambassador to Egypt, basically a form of exile.

Finally, General Duong Van Minh led a coup, and Diem was assassinated in November 1963. Upon hearing this, Tuyen returned to Vietnam, thinking he would be safe. Instead, he was arrested, tried, and sentenced to five years in prison. When his prison term ended, Tuyen remained under house arrest. He was allowed to write political columns under an assumed name.

In April 1975, as South Vietnam collapsed amid a communist onslaught, Tan Kim Tuyen escaped to the US with the help of his old friend, Pham Xuan An.

The Republic of Vietnam had many different organizations involved with intelligence. Their military intelligence relied heavily on the CIA and US Army. The National Police were very involved with the counterinsurgency program against the Viet Cong. This was somewhat effective at dismantling the Viet Cong infrastructure. Other parts of South Vietnam’s intelligence were corrupt, like Binh Xuyen, or subject to much political intrigue, like the Department of Social and Political Services.

“The “White Mice” of Vietnam,” SGM Herbert A. Friedman 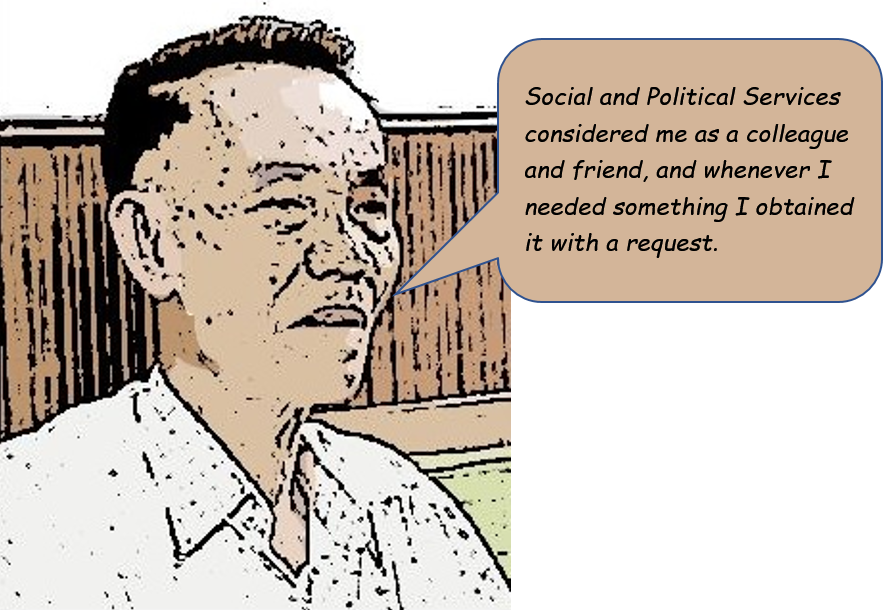