Running through the years from 1948 to 1967, Campaign Series: Vietnam 1.0 will cover the three wars of the time period, the French Indochina War, the Vietnamese Civil War, and the first years of US involvement in Vietnam. And with 100+ scenarios, we hope there’s something for everyone to dive in.

We’ll start this new countdown to Vietnam 1.0 blog series with the French Indochina War. Here goes (with a disclaimer we are still with a late BETA version of the game)!

Rewind your clock back to 1948, as that’s where the French Indochina War kicks off in the battle of Giong Dinh. Here’s the Scenario Selection dialog with the current beta: 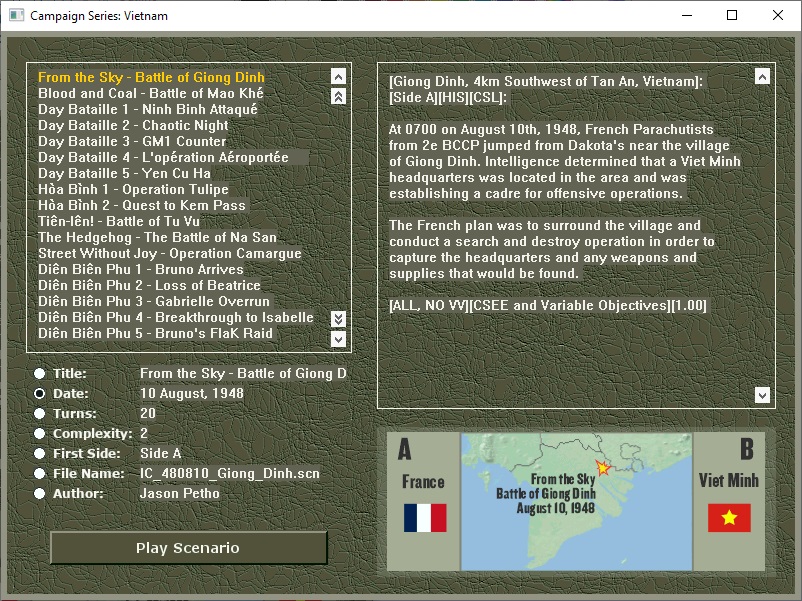 From the Sky – Battle of Giong Dinh

At Giong Dinh, it is still relatively low key, with a quick company sized jump to clear out a suspect Viet Minh operations center there: 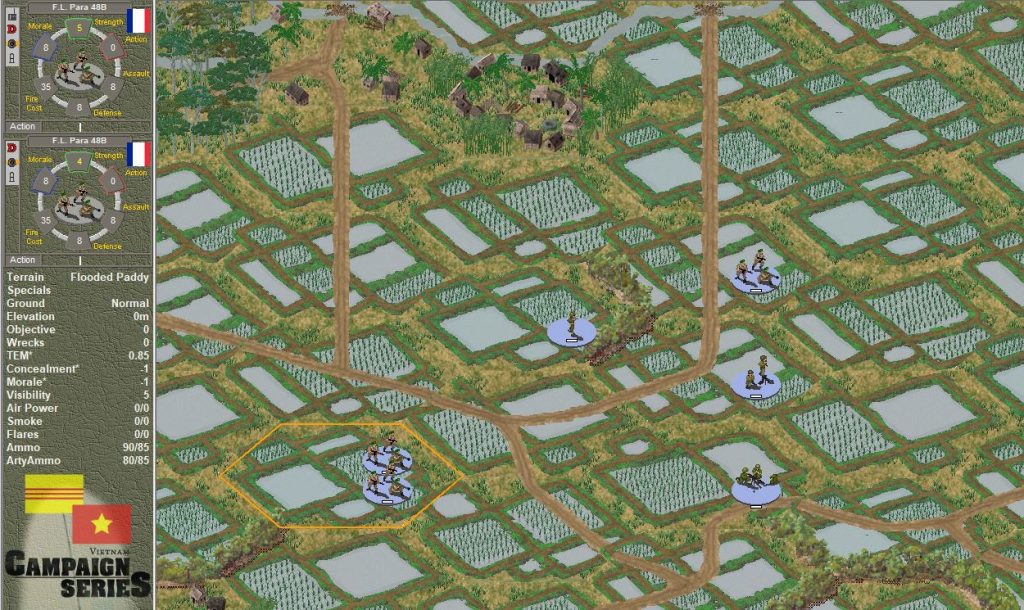 Building up from there, the battle of Mao Khe in 1951 is covered next. Defending Mao Khe is approximately a Battalion sized French formation against the elements of the Viet Minh 308th, 312th and 316th Divisions.

After Mao Khe, the war – and scenarios depicting it – escalate quickly. What follows then is a five-scenario long coverage of the Day River Campaign, where if playing vs computer you actually get to play both sides. First as Viet Minh, for the first two scenarios, it is important you’ll quickly learn the tactics to overwhelm the French positions. Using the cover of the night shall be important as well. 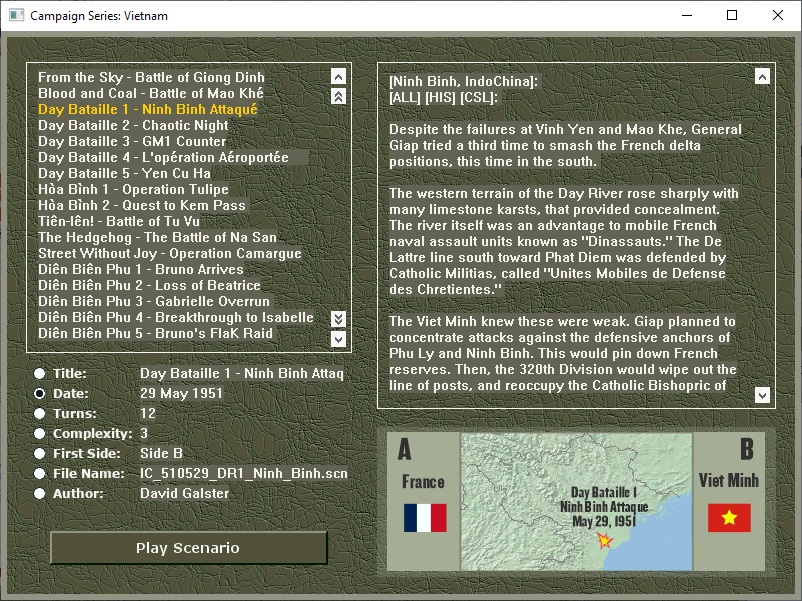 Playing the French side, next, you will soon learn this war will actually take some serious effort if the French rule over Indochina is to be preserved. After the French counterattack, there’s two more Side B  first scenarios with Viet Minh with the initiative.

Having fought your hardest at Day River, the Hoa Binh Campaign and the two scenarios covering it await next: 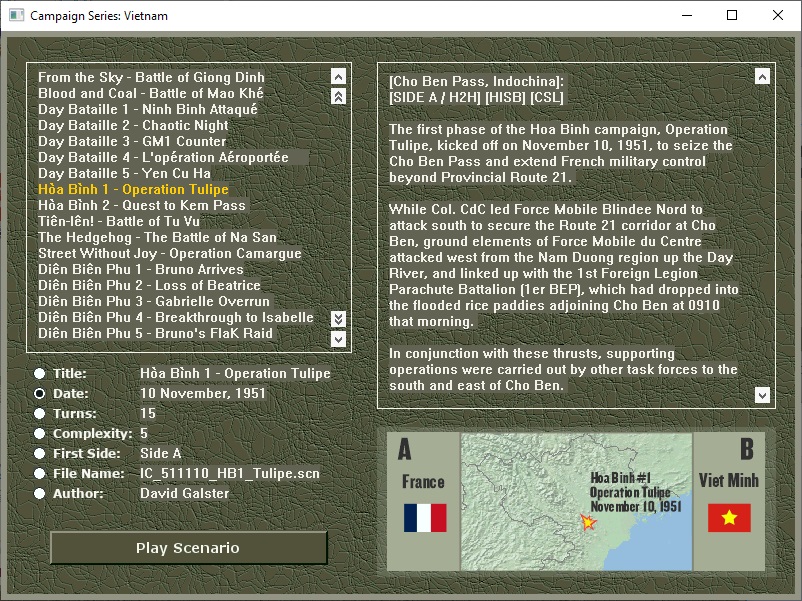 There’s still some linear battling to be had before the Viet Minh learns to master the asymmetrical nature of the war in the latter years. 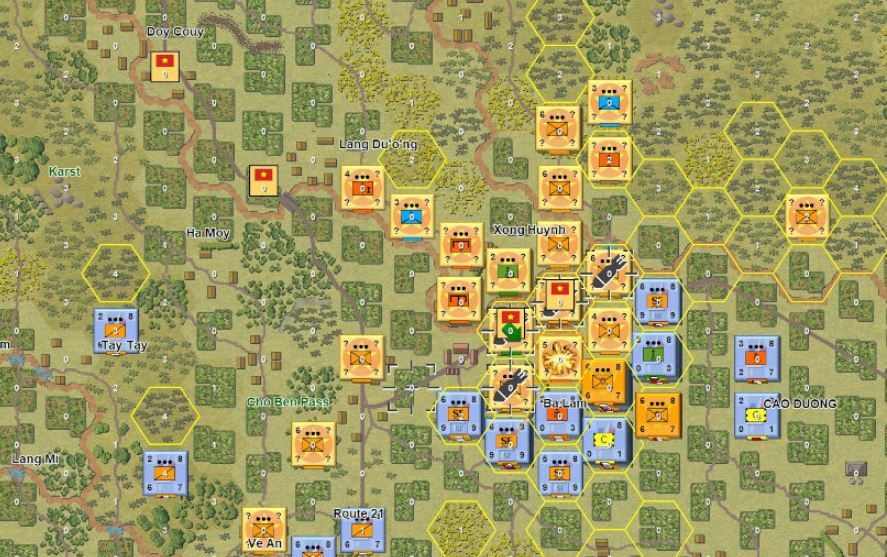 …while Operation Lotus and the road to  Kem Pass scenario will have them on the ropes trying to keep the few routes open against a clever and cunning enemy.

Road to Kem Pass, with a widescreen view – Can’t be that difficult, can it?

Both Hoa Binh scenarios have the French with the initiative, vs a stubborn Viet Minh element on the map.

Then, three more individual battles, first at Tu Vu where the Viet Minh is about to attack a French outpost, and Na San, a larger battle with the French player defending a hedgehog perimeter around Na San against a determined Viet Minh opponent.

Then, Street Without A Joy in a large, complexity 8 scenario by Jason Petho … 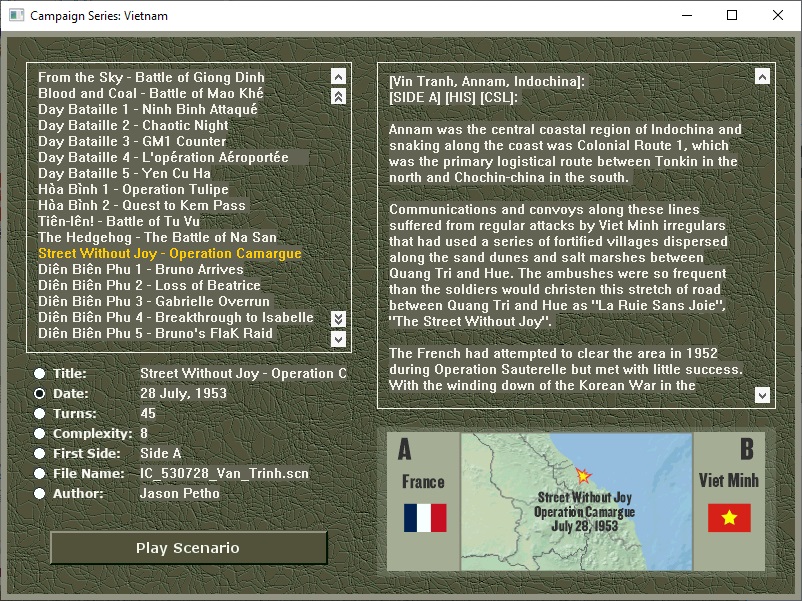 The Street Without Joy

,,, together with a huge map of the area, where under Operation Camargue, one the largest use of French forces set to clear the area:

Street Without Joy in its full glory (night graphics)

Definitively a chance for some misery and lack of joy, trying to find the evasive enemy before they vanish to the darkness of the night!

From street without joy then to Operation Castor and Dien Bien Phu.

We all know how that will end, but hopefully there will be some joy to be had, with the scenarios available in the game? Dien Bien Phu is actually covered with a hugely excting ten-scenario series!

From parachuting to valley and  taking over the objectives there, towards a siege operation the medieval warlords would be jealous of. As the Viet Minh noose tightens, there’s less and less room to maneuver for the French troops. They won’t be sitting it out though, a good few French initiatives covered here as well: 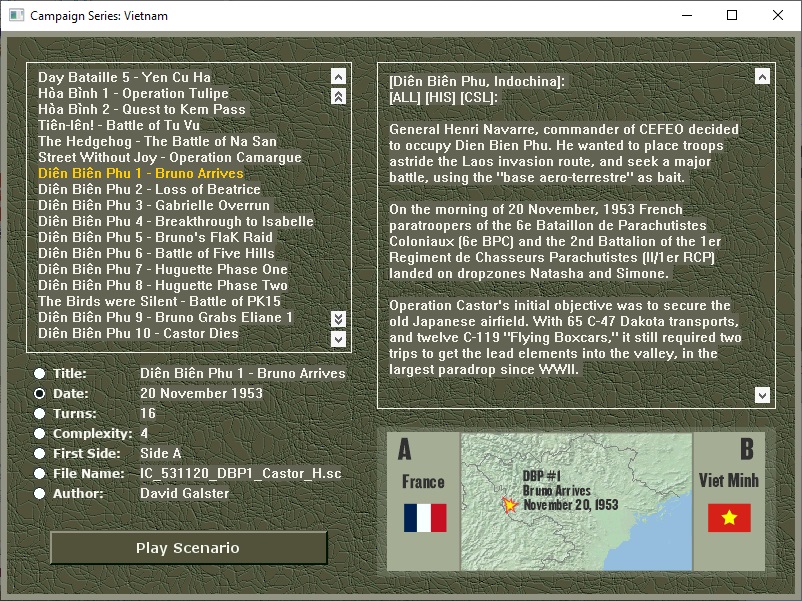 With Dien Bien Phu series, you will again have a chance to play scenarios against computer both as the French or Viet Minh player. The French player is with the initiative with Bruno Arrives, Breakthrough to Isabelle, Bruno’s FlaK Raid, and the Battle of Five Hills, while the Viet Minh player has the first go with the rest, first assaulting the Beatrice strongpoint with scenario #2, and finally putting an end to it all with scenario #10, Castor Dies.

Worth a shout here are also the articles covering the famous battle by David Galster and available at CSLegion.com, as part of Bruno’s Bunker series, for instance Operation Castor describing the French strategy behind Fortress Dien Bien Phu, and from the beginning of Bruno Arrives, to  the bitter end with Castor Dies.

Also worth a shout – a lot of shouting going on here it seems – is the battle at the Kilometre Post 15, available here with yet another chance to have the French being ambushed by Viet Minh. 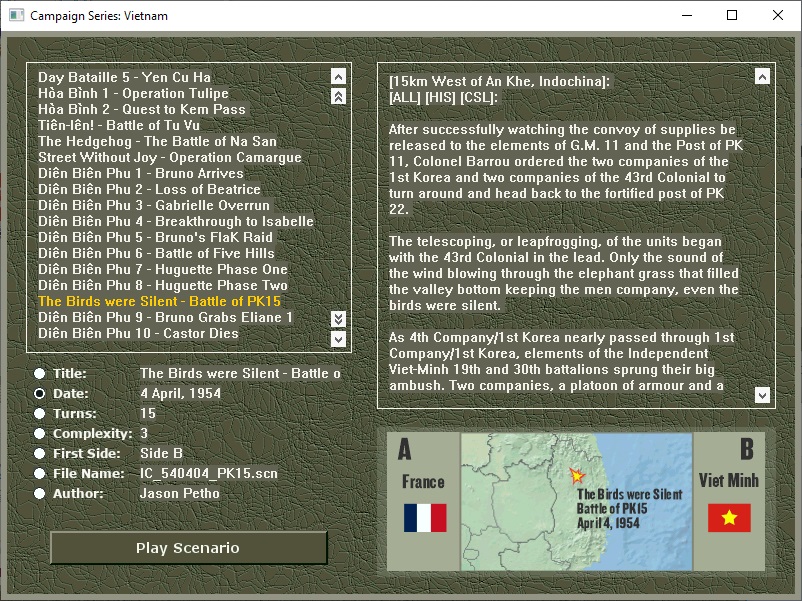 As per the scenario information above, tagged as ALL, the computer player shall be well equipped to handle either side here. ALL covers the head to head play against a friend as well, there will be plenty of Play by email or Hot Seat fun with all of these scenarios as well.

Thanks for reading this far!

That’s twenty+ historical, thoroughly researched Indochina War battles covered in the game. Viet Minh, French formations, ARVN, and other troops such as the Catholic Militia, they all shall play a part.

Should that not be enough, should that one favorite historical skirmish miss from the set, worry not. While there’s over 100 scenarios included in Vietnam 1.0, there’s also the full set of editors available, per our usual standards. Complete with Orders of Battle for the era and a set of HUGE master maps to assist in creation of any new scenarios you’d like to see there.

Another set of blog posts is covering the new Campaign Series Event Engine to spiff those new creations even more up.

Next Stop: the Vietnamese Civil War

In the next blog post for this series we’ll be introducing the Vietnamese Civil War scenarios included in Vietnam 1.0.