The Vietnamese Civil War in Vietnam 1.0

Welcome to second part of articles covering the scenario content in Campaign Series: Vietnam 1948-1967, scheduled for release in January 20th, 2022.

In our first article covering the scenario content in CS: Vietnam in its initial release. we talked about the French Indochina War. In this article, we move forward to talk about the civil war period prior to the U.S. involvement, covered in 25 historical scenarios. With the usual disclaimer we’re still with a late BETA with any last-minute changes possible, here goes!

To kick of the Civil War scenario introductions, we start in Spring 1955, set up with for an Head-to-head clash for the control of the metropolis. It can also be played as a Side B battle, having you commanding elements of Binh Xuyen’s private militia against the ARVN forces trying to pacify the area. 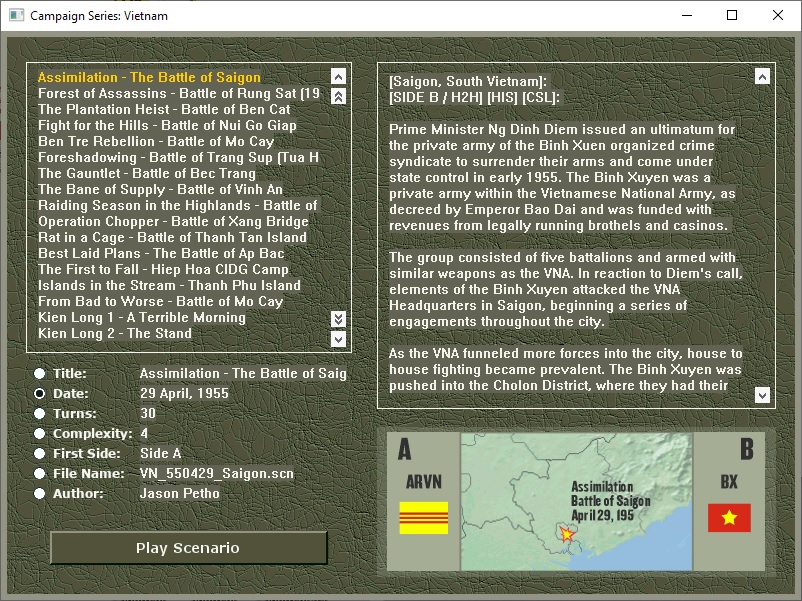 Assimilation – The Battle of Saigon is also unique in that the battle is not fought on jungles, but on the vast metropolis that the Saigon is, depicted in this wonderful map by Jason Petho: 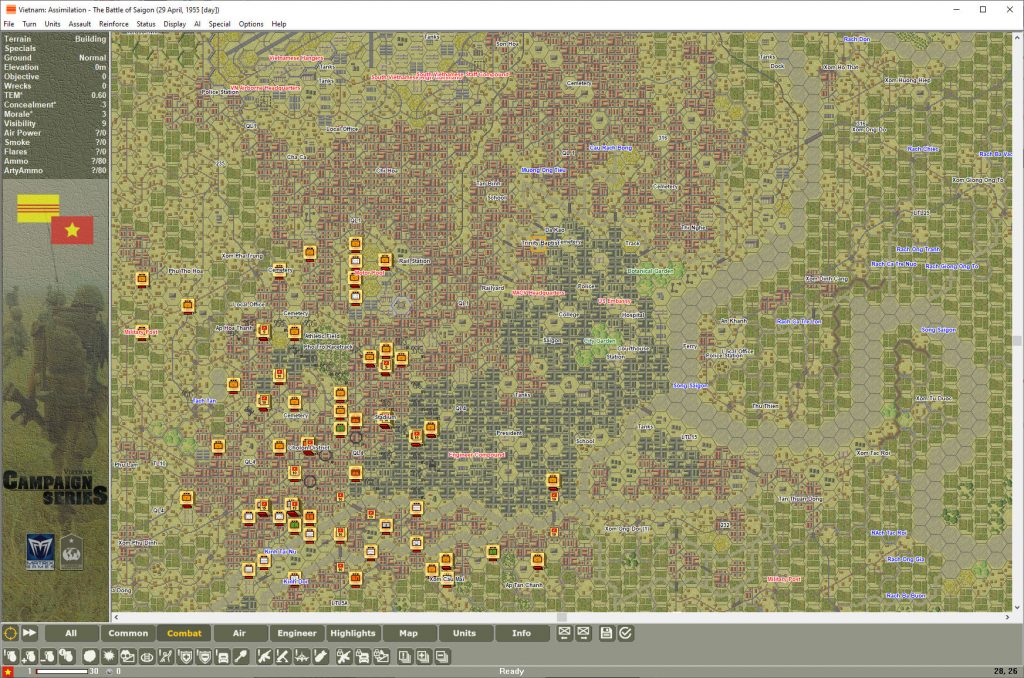 The fight between the Binh Xuen and Vietnamese National Army is continued in a follow-up scenario, Forest of Assassins – Battle of Rung Sat, available for either H2H play, or waging a fight against the computer player, having you with the ARVN forces desperate to flush out the remnants of Binh Xuen militia from the vast mangrove forests around the Saigon River.

With Binh Xuen and his private militia dealt with, there’s no rest for the weary among the ARVN forces, for the civil war scenarios move to battles having Viet Cong stretch its muscles. The first such battle takes place a few years later, in 1958, with The Plantation Heist – Battle of Ben Cat having the Viet Cong attacking a string of military posts around and at the town of Ben Cat. A neat Complexity 2 scenario after the large battles in the first two scenarios: 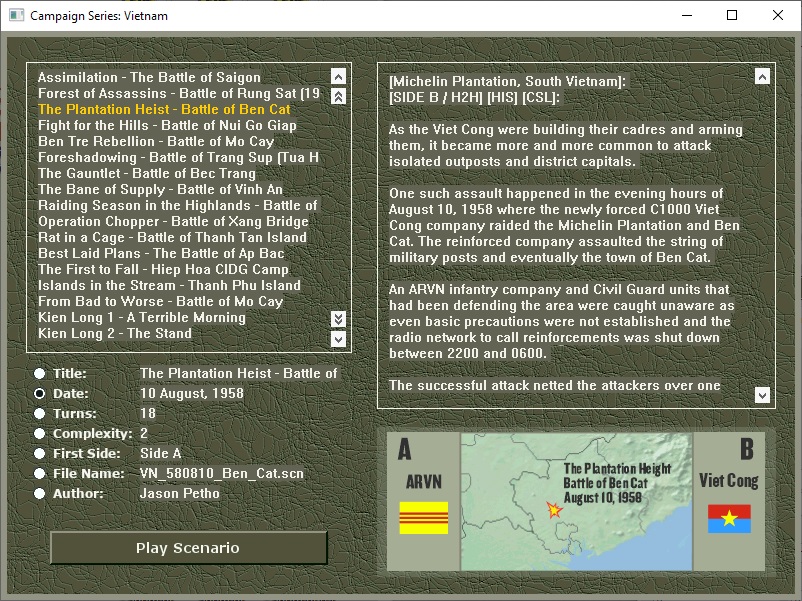 Skirmishing against VC continues with the next scenario taking place in 1959, Fight for the Hills – Battle of Nui Go Giap, before the scenarios move to 1960 and the four battles covering that year: battles of Mo Cay, Tranp Sup, Bec Trang and Vinh An. Playing against the computer-controlled Viet Cong will see you witnessing them perfecting their art of asymmetric warfare the conflict will become quite familiar with.

Battle of Kontum is the sole scenario covering the year 1961, but what a moody battle it is, having your ARVN base at Kontum facing themselves with a very resurgent Viet Cong  presence. It is becoming quite clear at this stage which sides is keeping the initiative at their well covered hand. 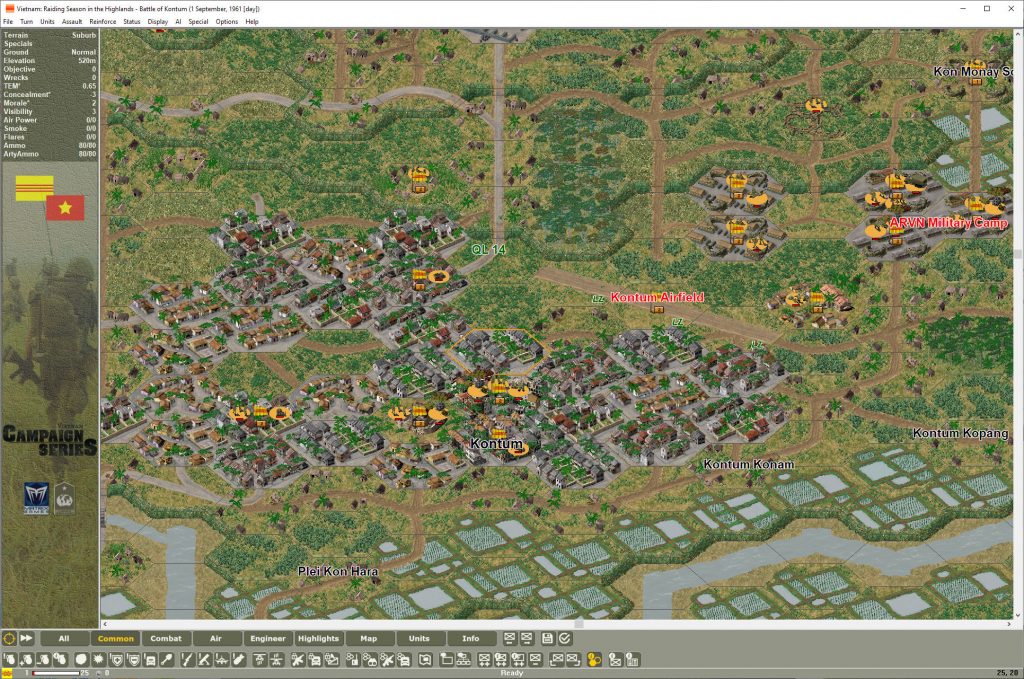 One year later, and we have our first truly air mobile scenario in Vietnam! Operation Chopper sees elements of the ARVN para battalions assaulting a non-suspecting Viet Cong force, gaining a surprise, but giving the VC a valuable lesson against these types of tactics as well. Operation Chopper also saw the first US casualties in Vietnam. 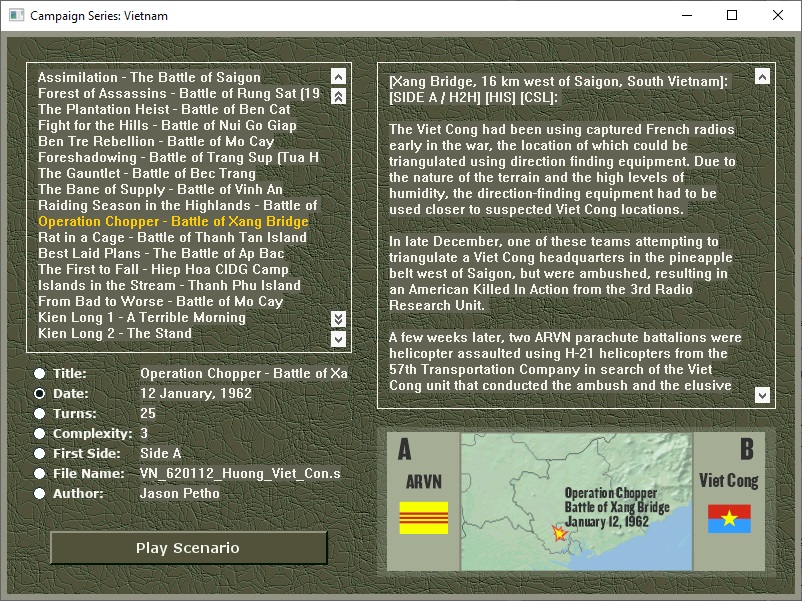 1962 includes another battle too, Rat in a Cage – Battle of Xang Bridge, having elements of Civil Guard and Self Defence Forces trying to eliminate a trapped VC battalion in the island of Tan.

1963 sees us with two scenarios as well, the battle of Ap Bac, and the first set back for the Civilian Irregular Defense Group program with the fall of the Hiep Hoa camp – unless you can prevent it, of course! Here’s a screenshot depicting the fortified village in its 3D night graphics glory: 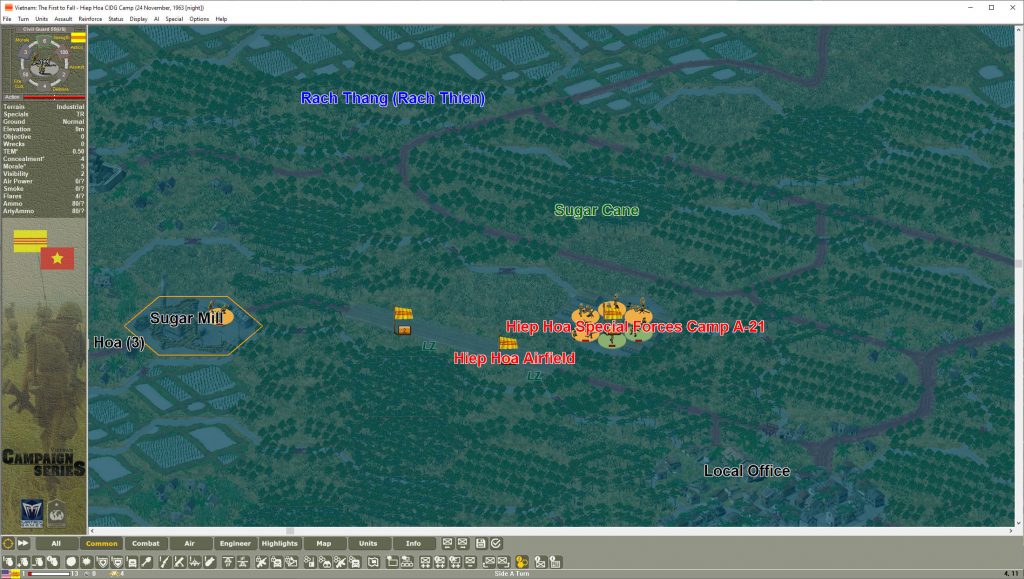 Here’s a screenshot from Binh Gia 3 – The Sacrifice, this time using the 2D boardgame view for a change. Scenario starts with the village of Xa Binh Gia in friendly hands, but the Viet Cong seems to not be that far off either. Wait a minute, is that a U.S. presence we are seeing here? 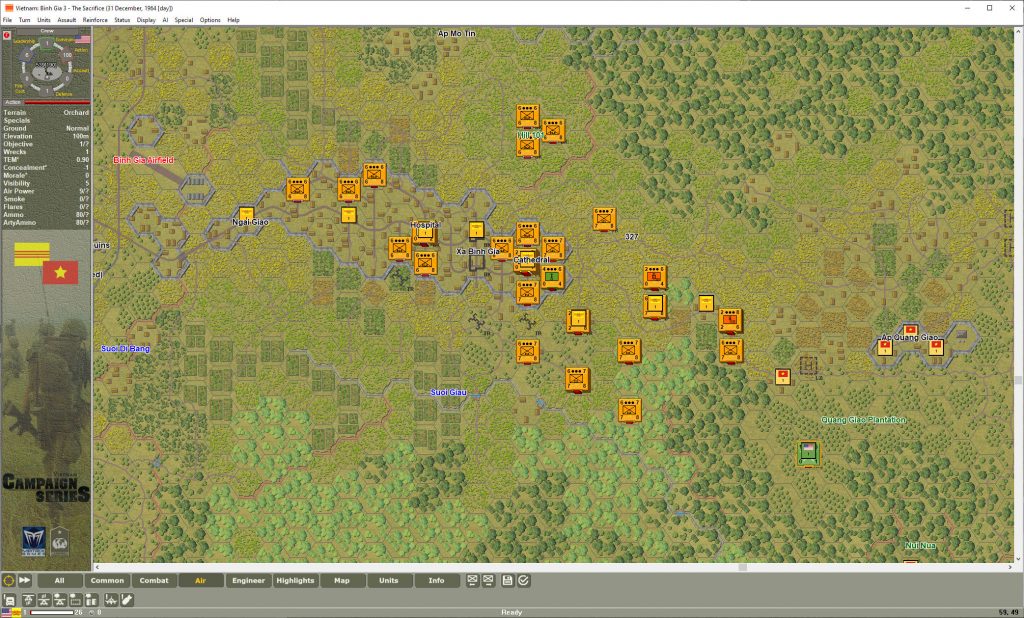 Battles of Thanh Phu Island, Mo Cay, and Ben Tre are being covered as well.

Another year, with no resolution to hostilities in sight. 1965 is indeed a very busy year in CS: Vietnam 1948 -1967, with a whopping 14 scenarios covering this watershed moment in Vietnam War history.

We are only introducing the first four of them, though: 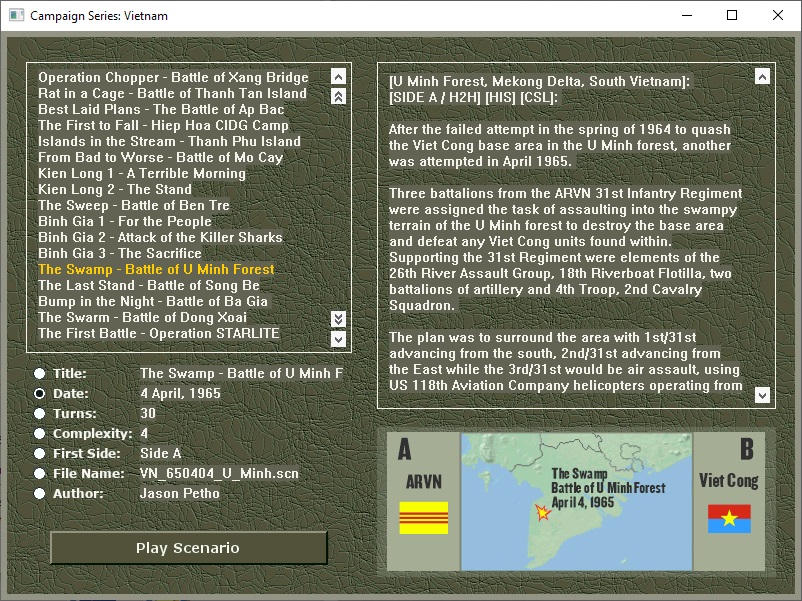 …as the fifth one spells the beginning of the US involvement in the war itself!

So here we are, with Operation STARLITE as a teaser as the last row in this Scenario Selection Dialog screenshot…