Didn’t I tell you that things in Laos were very confusing? Maybe this little briefing on the 1960 Laotian Coups will help clear things up, just a little.

The “wild card” that caused so much turmoil was a young Lao Theung Captain named Kong Le. Enlisting in the Army in 1951, he showed promise and gained appointment to the Officer Candidate School at Dong Hene. Graduating 19 out of a class of 21, he showed aggressiveness but, changeable temperament and rapid mood swings. Later, he attended Scout Ranger training at Fort William McKinley, in the Philippines.

On return to Laos, Kong Le joined the Bataillon Parachutistes 2, as second in command. His peers during this early paratroop service were the notable Vang Pao and Thao Ma. The battalion was considered the “cream” of the Royal Laotian Army.

Kong Le was no mere soldier, looking to serve dutifully, and follow orders. Instead, he was very political and outspoken. His causes were strict Laotian neutrality, and ending government corruption. 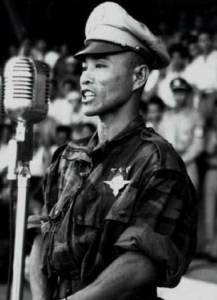 In December 1959, the commanding officer of BP 2 was in the United States, leaving Captain Kong Le in charge. This was at a critical time when the term of the National Assembly expired. Generals Ouane Rattikonewhile and Phoumi Novasan encouraged him to fill the power vacuum. And so, on 25 December, 1959 Kong Le and the Bataillon Parachutistes 2 took control over Vientiane in a rather bloodless coup. Phoumi Novasan became the Minister of Defense, but actually held actual power over the Royal Lao Government.

However, in the following months, Kong Le’s Bataillon Parachutistes 2 went upaid much to the time, and became mutinous. Kong Le decided to seize the capital again, for his own power and on August 10, 1960 seized power a second time, this time deposing Phoumi Novasan.

Kong Le’s aims in seizing the capital became apparent in his radio broadcasts:

“What leads us to carry out this revolution is our desire to stop the bloody civil war; eliminate grasping public servants and military commanders…whose property amounts to much more than their monthly salaries can afford…. It is the Americans who have brought government officials and army commanders, and caused war and dissension in our country.”

The CIA was at first “charmed” by Kong Le and perhaps thought he could be a useful leader. Kong Le, in CIA’s own judgment, was a “highly competent professional soldier,” an essentially apolitical “born leader” whose motivation when he staged the August 1960 coup was hostility toward the admittedly “corrupt bureaucracy” of his own government. Ulitmately however, his disparaging remarks about Americans did not win US support. Vang Pao would become America’s favored Laotian war leader.

Phoumi Nosavan did not give up power easily, and he flew to Bangkok, soliciting support from his first cousin, Field Marshal Sarit Thanarat, the dictator of the Kingdom of Thailand. Phoumi then flew to Savannakhet, Laos to establish a headquarters and assemble a resistance movement.

The Pathet Lao pledged their cooperation with Kong Le. The next four months of turmoil saw Kong Le struggle to maintain control over the Kingdom of Laos in the face of a increasing resistance. Kong Le convinced Souvanna Phouma to become Prime Minister in the new government; in turn, Souvanna appointed General Ouane commander in chief of the RLA.

In early October, Vang Pao declared Military Region 2 support for Phoumi. After internecine struggle, Military Region 1 also remained in Phoumi’s control. On 16 November, General Ouane flew to Savannakhet to join Phoumi. With Central Intelligence Agency financial backing, and aided by CIA-trained commandos, Phoumi’s troops set forth at 0800 hours on 21 November 1960 to reclaim Vientiane. On 13 December 1960, Phoumi’s counter-coup column began his assault on Kong Le’s paratroopers occupying Vientiane. For four days, the two sides fought with crew-served weapons without close combat. On 16 December, Kong Le’s forces withdrew northward toward the strategic Plain of Jars, leaving Phoumi once again in charge of Laos. Not long after, Souvanna Phouma retumed as Prime Minister. This government was to remain in power until the Pathet Lao took over in 1975.

The FAN forces grew to about 8000 by the end of 1962, and Kong Le promoted himself to Major General. In 1963 however, a split-up occurred, and FAN rejoined forces with the Royal Laotian Army. Kong Le’s second in command, Colonel Deuane Sunnalath broke off, and stayed with the Pathet Lao, under the name of Patriotic Neutralist Forces, PNF.

Thus, the “Secret War” began in earnest with the CIA-backed Hmong, allied with the Royal Laotian Army, plus the Forces Armee Neutralistes opposing the Pathet Lao, North Vietnamese, and Patriotic Neutralist Forces.

With the coups of 1959 and 1960 and Kong Le’s subsequent alliance with the Pathet Lao, the Royal Laotian Government never really trusted him again. Starting in 1964, with Operation Triangle, Kong Le’s forces were assigned to defend the airfield at Moung Soui, west of the Plain of Jars. They were also given the mission to retake Phou Kout, a mountain that overlooked Route 7 between Moung Soui and the Plain of Jars. Over a two-year period, Kong Le was never able to retake Phou Kout from the Pathet Lao. He did not exert good leadership in this period, and during some of these battles, he spent time in a Buddhist monastery, in meditation.

As for the US State Department, impatience grew with Kong Le, and Under-Secretary Dillon said he was, “a Castro communist-type individual.” No government he controlled could be trusted.

In January 1966, Bataillon Infanterie 14 mutinied in protest against Kong Le’s lack of leadership. Bataillon Infanterie 8 then mutinied on 30 March 1966, walking off the battlefield. By now, Kong Le lost support of most of his subordinate officers. His interest in a French intelligence officer’s daughter did not help matters. Three of his subordinates divided up command of FAN, and forced him into exile. Kong Le sought asylum in the Indonesian embassy in Vientiane. On 17 October, 1966, he left Laos.

Well grunts, what do you think about all of that? Kong Le was quite a colorful character, huh? Maybe very energetic and unpredictable. It seems he couldn’t quite figure out which side he wanted to be on, and stick with it to victory.

I imagine Tony Poe had to figure all of this political wrangling out too, so he could advise Bill Lair on the best US policy to fight communism. Tony Poe also was very energetic and unpredictable, but at least he knew which side he was on . . . 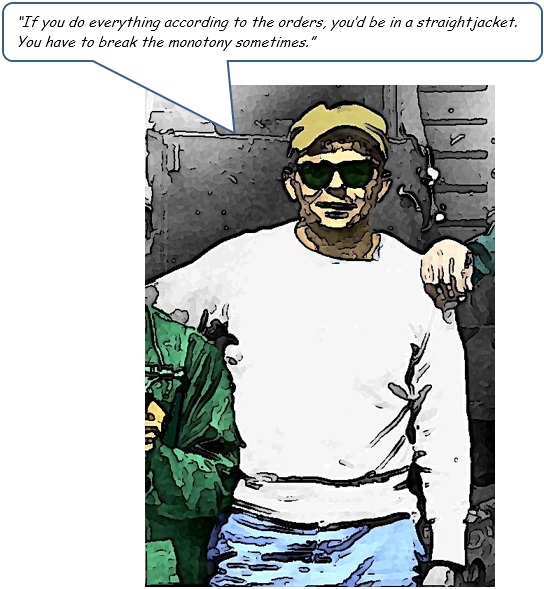