Do you know which country is the most heavily bombed in world history? An estimated 2.5 million tons of bombs were dropped on Laos – far more than WWII Allied planes unloaded on Germany and Japan, combined. The Laos air war was how the Americans expected to support the Laotians against the North Vietnamese, and stop the flow of Communist soldiers and supplies through the Ho Chi Minh trail. This is an overview of command and communications, forward air controllers, airbases and squadrons, and finally, the CIA’s own airline, “Air America.”

The codename for a covert command structure to “advise, assist in targeting effort, and to coordinate Laotian air support requirements,” was PALACE DOG. This was organized through Detachment 6 of the 1st Air Commando Wing, and was the Department of Defense “Project 404.” About 120 USAF and Army personnel were stationed at Royal Laotian Air Force (RLAF) bases, Royal Laotian Army (RLA) Military Headquarters, and air bases in Thailand. While only part of these men were Lao trainers, a number helped coordinate Lao Air Operations Centers (AOCs) and RLAF and USAF aircraft. A program, code-named “Water Pump” trained Laotian pilots to fly T-28 Trojans.

One of the challenges that PALACE DOG faced was that the U.S. Seventh/Thirteenth Air Force, based in Thailand (which carried out the majority of the Air Force’s strikes in North Vietnam), had a dual command structure. It reported to the Seventh on operational matters, but, to Thirteenth Air Force (HQ in Philippines,) for logistical and administrative concerns. These command and control complexities grew even more tangled with four competing operational areas: South Vietnam, North Vietnam, and Laos (both north and south).

The headquarters for PALACE DOG was at Udorn Air Base, Thailand. The ground-based Direct Air Support Center, (DASC) and the Airborne Battlefield Command and Control Centers (ABCCC) operated here. Up to 1967, the ABCCC coordinating all air strikes were USAF EC-47s, and since 1967, they were Udorn-based EC-130E aircraft. Two ABCCCs “orbited” over Laos, one operating in northern Laos, using the radio call-sign “Cricket” during daytime and “Alley Cat” during night, and another one operating in the Laotian panhandle, using call-sign “Hillsboro” in daytime, and “Moonbeam” at night.

The ABCCCs coordinated all USAF, Navy, and RLAF aircraft. Raven Forward Air Controllers (FAC) reported target locations to the ABCCCs and they assigned fighter-bomber sorties. As has been made clear, these ABCCC did not give the orders themselves, but they served as relay stations between the “Country Team” as well as other military headquarters and the aircraft involved in the air strike. When a target chosen by a Raven was approved, ABCCC would call in RLAF T-28s, AC-47s, or USAF jet fighters.

While the fighters were on station, their operation would be controlled by the Raven, and after departure, the Raven FAC remained over the target to make bomb damage assessments (BDA), which he relayed to the fighters and to the ABCCC. The ABCCC aircraft would send BDAs thru to the Air Attaché’s office at Vientiane, who gave direct orders for the next missions.

Operation Barrel Roll was a covert, interdiction and close air support campaign conducted in Laos between 1964 and 1973. The majority of the close air support aircraft were Douglas A-1 Skyraiders and T-28 Trojans. Until 1968, most jet fighter-bomber sorties occurred when returning aircraft from Rolling Thunder missions carried unexpended ordnance. They would then be directed to targets in northeastern Laos under Barrel Roll.

Operation Rolling Thunder was an aerial bombardment campaign conducted against the North Vietnam from 1965 until 1968. The majority of strikes were launched from four air bases, in Thailand: Korat, Takhli, Udon Thani, and Ubon. The aircraft refueled from aerial tankers before flying on to their targets. Aircraft included F-105D Thunderchiefs, F-4C Phantoms, and F-8 Crusaders. Navy Task Force 77 also participated from Yankee Station using A-4 Skyhawks.

Operation Steel Tiger was a covert interdiction effort on the Ho Chi Minh trail. This began in 1964 and continued until 1968, when it was merged with Operation Tiger Hound and renamed Commando Hunt. The Tiger Hound area was much smaller and adjacent to the South Vietnamese border in the most southern part of Laos. These campaigns used B-52F Stratofortresses deployed in Andersen Air Force Base in Guam and U-Tapao Royal Thai Navy Airfield in Thailand. Their involvement was code-named “Arc Light.” Other aircraft were fixed wing gunships including the AC-47, (SPOOKY) AC-119, (STINGER) and AC-130. (SPECTRE) These were more effective, but were involved in a small fraction of total sorties.

Forward air controllers in Laos were selected and assigned within the “Steve Canyon” program, named for a 1950s action comic strip. Air Force pilots completing six months of FAC duty in Vietnam were selected, and offered this option.

If accepted, they would go through a military status change called “sheep-dipping.” This was basically resignation from the Air Force. Service records were transferred to top secret CIA files. A cover story was written to explain the resignation, and the pilot basically became a civilian. If killed or captured, all sorts of pension and insurance issues would arise, and the CIA created its own insurance company to handle this.

These pilots were called “Ravens.” Their call sign included a number afterwards, usually a sequence. “Raven 45” was Karl Polifka, who wrote “Meeting Steve Canyon . . . and Flying with the CIA in Laos.” Initially they reported in at Udorn, assigned to Detachment 1 of the 56th Special Operations Wing. After some orientation, sent to either Long Tieng or Pakse depending on the needs at the time.

Ravens usually flew the Cessna O-1 single engine plane. The speed was low, and they could circle over targets, sometimes marking them with white phosphorus rockets, called “Willy-Pete.” Some pilots could use U-17 Cessnas or even T-28 Trojan aircraft.

Typically a Hmong “back-seater” accompanied Ravens on their missions for help in target identification. Ravens were in radio contact with the ABCCC, Long Tieng, and various pilots in the fighter squadrons making the bombing runs. The Lima Sites were often used to land and refuel.

Virtually all Laos Secret War US Air Force assets were based in Thailand. Rather than using a narrative, these squadrons, bases, and aircraft composition are best communicated by table. Thus the reader can readily see some of the key squadrons that participated in the air war, the aircraft used, and locations and times of their service. 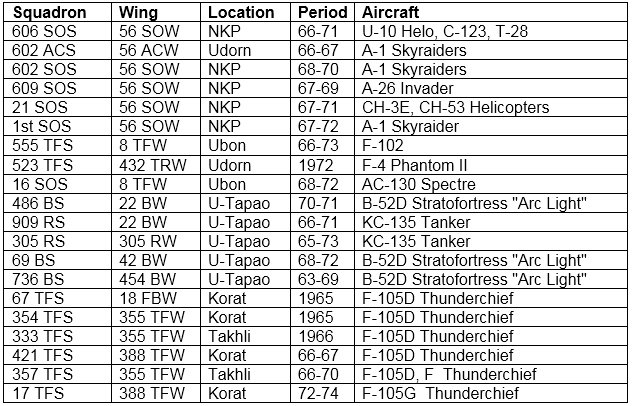 This was a civilian passenger and cargo airline, covertly owned and operated by the US government from 1950 to 1976. It began with Civil Air Transport (CAT) that was started by Gen. Claire Chennault in China in 1946. In 1950, the CIA formed a corporation named Airdale. This company bought 40% of CAT and used the name as a subsidiary corporation. It was based in Taiwan initially. In 1957, Airdale changed its name to Pacific Corporation, and CAT changed its name to “Air America.”

In Laos, starting in 1959 the airline provided transportation for US operations  “Ambidextrous”, “Hotfoot”, and “White Star”, which trained the regular

Laos operations were headquartered in Udorn. The main routes were into Vientiane (Wattay) Airport and Long Tieng. In addition, they made flights to all the Lima Sites to bring in supplies and move troops.

There were about 490 Lima Sites in Laos. These were typically dirt strips, with only one runway, often 600 meters or less in length. Some were in elevated mountain areas, and might have 20-degree bends, or up-slope gradients of forty-five degrees, and in some cases, had steep downward slopes at the end, where aircraft would go down if the brakes failed. Of course, there were no beacons, nor navigational aids whatsoever.

For these reasons, Air America used many helicopters, and short take-off and landing, (STOL) fixed-wing aircraft like the Pilatus Porter.

This should give a good overview of the massive air war that was fought in Laos. Some of it was effective, like providing combat support to the Hmong. Other parts of it failed,  like inability to shut down the Ho Chi Minh trail.

I imagine that Tony Poe was very familiar with the air war, particularly Air America and the Lima Sites. It was Tony who set up the early Lima Sites in the 1963 Operation Momentum. 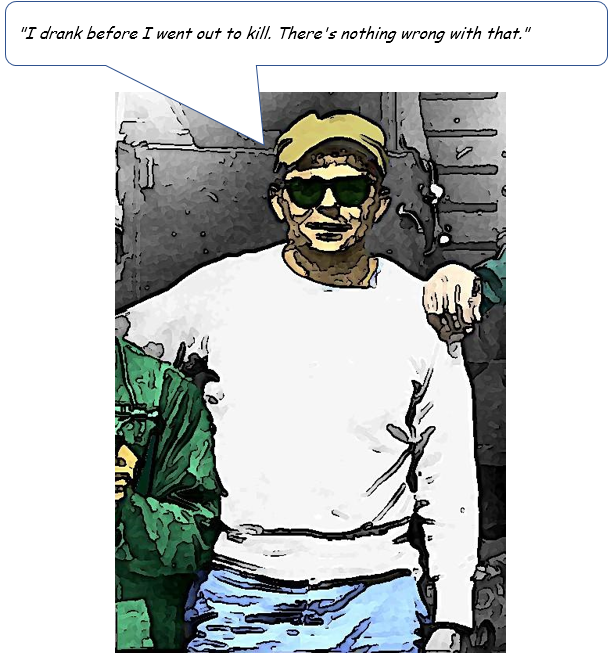