Despite the “Landgrab” and other hostilities occurring after the Paris Accord, would you think that the four principal parties would meet again to try and salvage the agreements? Well, they did in June 1973, and for a little while, there was a second “cease-fire.”

On 13 June 1973 the four-party Joint Military Commission, (US, SVN, DRV, PRG), met in Paris and issued a communique calling to observe provisions of the 28 January cease-lire. This was followed by a decline in combat activity, reaching the lowest level since the “Landgrab.”

Dr. Kissinger held a press conference in Paris in which he explained the joint communique to take effect at noon on 15 June. It was not a new agreement, but attempted to gain a commitment to follow the original one. Previously the Canadian delegation of the ICCS left Vietnam, saying that they had come to supervise a cease-fire but instead were observing a war.

President of South Vietnam, Nguyen Van Thieu made remarks to his cabinet. He felt the Communists were not likely to attack in strength during 1973. The best advantages would be to wait until the end of President Nixon’s term to launch offensives. This was due to Thieu’s belief that President Nixon would intervene in such a situation. Ironically, Thieu could not have known that two days later, Nixon accepted “full responsibility” for Watergate.

Combat levels in Military Region 1 were relatively low, because the NVA’s northern Quang Tri and western bases and logistical routes were neither seriously threatened nor interfered with. The North Vietnamese continued construction and stockpiling activities. They attempted to prevent aerial observation and photography, and the density of their anti-aircraft defenses denied manned flight over sensitive areas such as Khe Sanh and Cam Lo.

General Truong, commanding I Corps made adjustments his defensive sectors north of Da Nang. The Marine Division retained responsibility for the northern approaches in Quang Tri Province.  The Airborne Division was assigned the defense of the Co Bi-An Lo Bridge sector on the northwestern portion of the Song Bo River.  1st Infantry Division was responsible for the western and southern defenses of Hue as far south as the Thua Thien Province southern border. 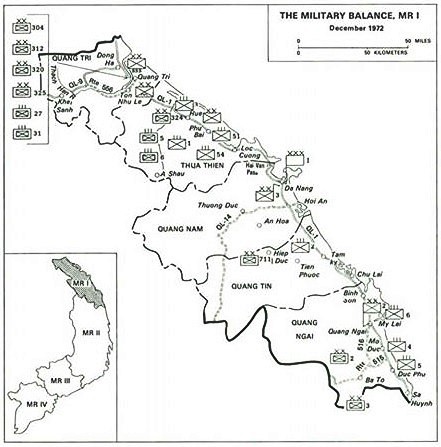 Positions held by ARVN 1st Division to the southeast were under greater enemy pressure. Forward positions of 3rd Regiment were attacked at a small tributary of the Song Bo, the Ngoc Ke Trai. In the first heavy action in the sector following Cease-fire II, two positions west of the connuence fell to Communist attack in late July. Pressure continued, and more outposts fell in late 1973.

At the close of 1973, the situation in MR-1 was such that ARVN regulars had control of major population centers and key lines of communication. The NVA was more or less on the ropes, but recovering, rebuilding, and receiving replacements. South Vietnamese territorials were taking the brunt of local terrorist attacks, which eroded morale, exacerbated already strained economic conditions, and contributed to a slow decline in confidence in government ability to influence or control the situation.

In MR-2 the situation was much hotter, as the NVA wanted to expand its hold on territory to control roads and logistics bases that approached Kontum. For the NVA, the last half of 1973 was a period for rebuilding and expansion. The intense fighting in the B-3 Front area, from Kontum to Quallg Due, was a result to expand its logistical system, particularly the Route 14 complex, and prevent ARVN encroachment into base areas and tines of communication.

The ARVN 44th Regiment. 23rd Division was driven out of Trung Nghia by a tank-infantry assault on 8 June. In early July, the 44th gained a few meters, and dug in on the eastern edge of Ngoc Bay, but could move no farther, despite employing massive artillery and airpower.

General Toan decided to attack from south against the positions at Plei Djo Drap, directly across the Dak Bla River from Trung Nghia. He hoped this would force an NVA withdrawal. ARVN 22nd Ranger Border Defense Battalion moved north from Plei  Mrong. They ran into the NVA 28th Sapper Battalion, and a few days later, elements of NVA 95B Regiment attacked the ARVN Rangers.

The ARVN 45th Regiment, 23rd Division moved southwest from Kontum and struck other elements of the 95B Regiment.  The NVA suffered from artillery at Trung Nghia and withdrew the 24B Regiment to Dak To. The 66th and 28th Regiments, 10th Division replaced them at Trung Nghia.

The ARVN 44th Regiment was replaced when the 42nd Regiment, 22nd Division was flown into Kontum from Binh Dinh Province. The 42nd methodically eliminated enemy bunkers with platoon-sized assaults. Trung Nhia was cleared by 7 September and the 42nd entered Polei Krong on 16 September. Mop-up operations continued the rest of September.

The Campaign Series Vietnam game plans to feature a scenario of the Battle of Polei Krong.

As the NVA strove to extend its logistics corridor south along the western highlands, an impediment

On 22 September, 26th NVA Regiment began an assault using heavy artillery including 122-mm and 130-mm guns, mortars, and rockets and T-54 tanks. It was too much for the Rangers and the camp was taken.

General Toan proposed a plan to retake Le Minh, but his subsequent actions revealed, that he was more interested in destroying the NVA 320th Division. President Thieu had directed him to use whatever means necessary to prevent the enemy from concentrating.

The plan was to entice the 320th Division into open ground along Route 509 where the NVA battalions could be destroyed by artillery and airstrikes. Instead, the 320th kept pressure along Highway 19, and the 320th was not seriously hurt. 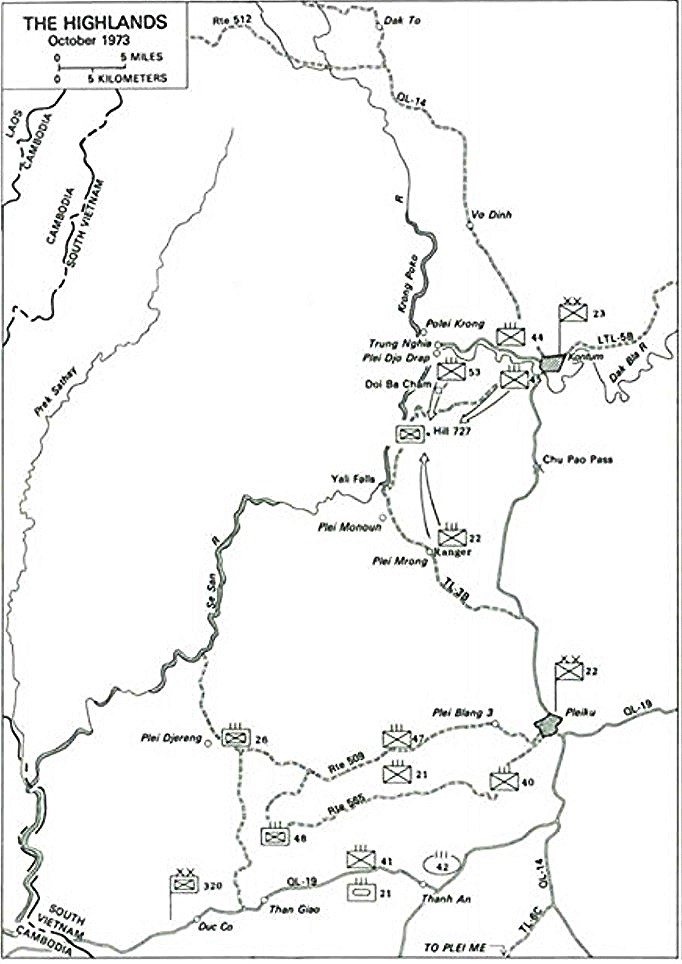 In MR-3 there were no major terrain losses for either side, but there were some areas of contact. For the most part, Communist forces built warehouses, workshops, roads, and antiaircraft positions. They received equipment and troop replacements while assembling a logistical and training base that spread across the northern border. By September they deployed the 367th Sapper Group from Phnom Penh to Tay Ninh.

The NVA exerted strong pressure against the Tay Ninh·Saigon corridor from its forward combat bases along the Saigon River from the Michelin Plantation to the Ho Bo Woods. They wanted to prevent ARVN from probing too deeply into their base areas.

The most significant action during this period in MR 3 took place along Highway LTL-1A between the Song Be River and Saigon. The NVA 7th Division attacked between Lai Khe and Phu Giao, and roughly treated the ARVN 5th Division. The heaviest action took place south of Phu Giao. 7th Division attempted to block the highway, and blew the Song Be River bridge. The NVA intention was to deny the road to ARVN, isolate garrisons north of the bridge, and screen movement of artillery and supplies. The NVA intended to supply bases in the dense forests  north of Bien Hoa and Xuan Loc.

The Mekong Delta had been an annual contest for the rice harvest. Nearly 90 percent of Communist rice requirements, to be filled from South Vietnam, were obtained from the delta. The South Vietnamese strove to interdict communication lines to prevent rice shipment to NVA delta base areas as well as Cambodian collection points, where much of it was transferred to the other military regions.

Cambodia had also became an NVA sanctuary since the defeat of Cambodia’s 32d Brigade at Phnom Penh in May 1973. The entire Cambodian | South Vietnamese border region from the Gulf or Thailand to the eastern edge or South Vietnam’s Hong Ngu District in Kien Phong Province was controlled by NVA and Khmer Communist forces.

The two most significant centers were in the O Mountain complex, opposite the Seven Mountains in South Vietnam’s Chau Doc Province. One was the rear base or the NVA 1st Division, the NVA 195th Transportation Group, and the 200th Rear Service Group; the other was NVA Base Area 704, which contained pari or the NVA 207th Regimem’s supply area.

One of three principal NVA infiltration routes, corridor 1-A crossed the Cambodian frontier near the border between Kien Phong and Kien Tuong Provinces, traversed the maze of canals through the Plain of Reeds, and ended in the watery wasteland called the Tri Phap.

The NVA Z-18 Regiment moved into the Tri Phap. Rice fields north of the Tri Phap had been planted under NVA control, part of the effort to become self-sustaining in the delta. ARVN repulsed numerous attacks against outposts and fire bases in Cay Bay, Cai Be, and Sam Giang Districts during July and August. In the first week of September alone, NVA casualties were 144 killed, while NVA losses were 17 killed and 78 wounded. 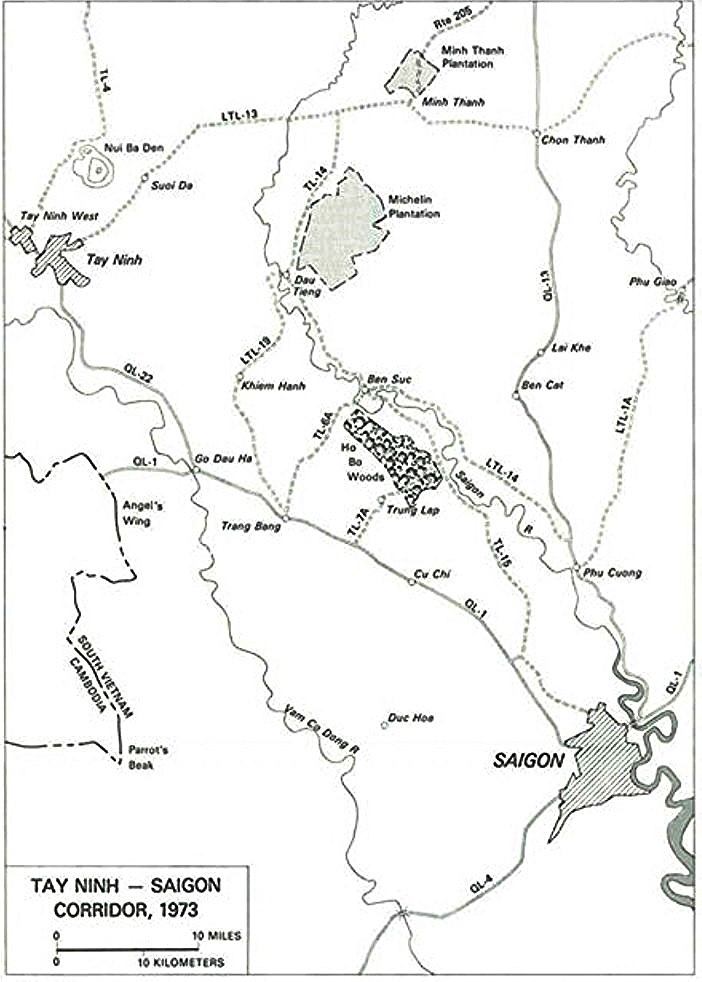 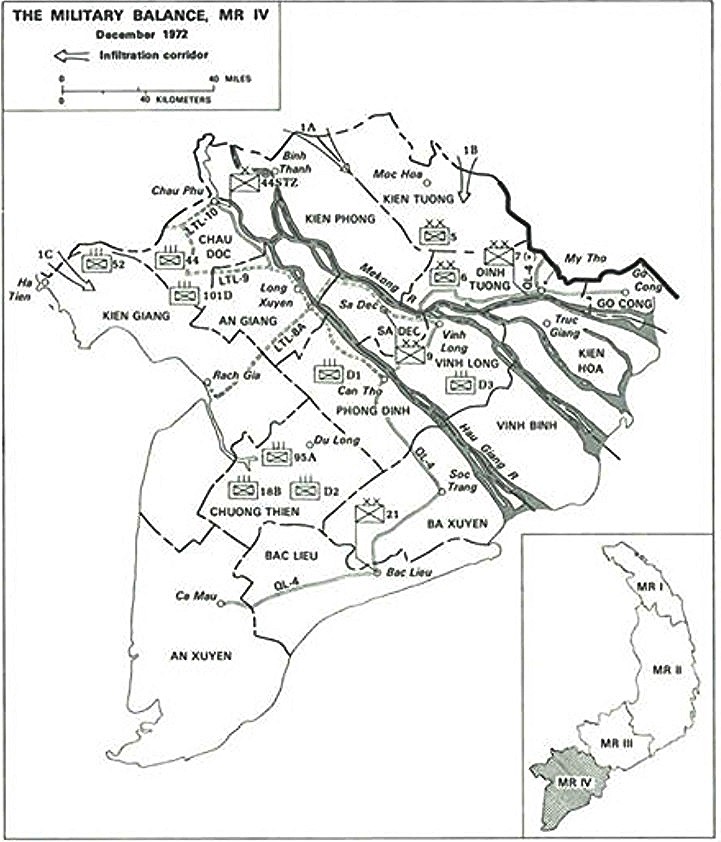 Decline of US Support

The Military Assistance Service Funded program for Vietnam became obsolete with the departure of American forces in January 1973. Months passed before the Defense Department and Congress could adjust to a new military assistance program. In the interim, DAO Saigon requisitioned supplies and equipment for RVNAF under continuing congressional resolutions.

The US part of the RVNAF budget for fiscal year 1974 called for expenditures of $1.1 billion. But on 19 December 1973, Rear Adm. T J Bigley, Director for East Asia and Pacific Region, cabled General Murray warning that the Senate committee reduced assistance for Vietnam and Laos to $650 million.

General Murray had identified $200 million in shortages for important items such as ammunition, medical supplies, and purchase of more amphibious ships like LSTs. The Defense Department requested an increase to $1.6 Billion to cover additional items.

The Congress, particularly the Senate, led by Senator Kennedy of the Armed Services Committee passed a resolution, capping the budget for $1.1 Billion. There was much back and forth, between the House and Senate, but this was the final approved budget for Defense Appropriation Act for fiscal year 1974.

This was also a precursor to the 1975 fiscal year budget battle. 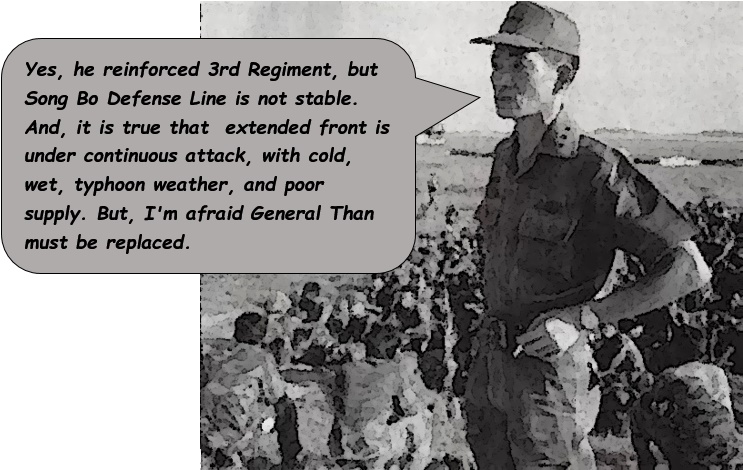 Truong’s Tragic Trail is the latest series of articles by David Galster that provides an overview of the events in Vietnam from 1973 until the end in 1975. The articles provide some interesting background information for the upcoming release of Campaign Series: Vietnam.