You are probably aware that the North Vietnamese employed large numbers of anti-aircraft guns on the trail. They also deployed SAM missiles at entry points, like Mu Gia pass. Hopefully, this article will provide more insight into the NVA’s vast air defenses, and their effectiveness.

In June 1966, the 367th Air Division was created. The forerunner was the 367th Advanced Artillery Regiment. At certain times, this division also protected the trail. Most of the weapons were employed at storage sites and base area complexes.

At the bombing halt in November 1968, there were about 200 guns of all calibers in Laos. When the USAF shifted its emphasis from North Vietnam to Laos, the North Vietnamese presumably redeployed large numbers of guns to that area. At any rate, the gun count in Laos rose rapidly, reaching about 500 by the first of 1969, and peaking at almost 600 in May 1969.

Several anti-aircraft gun types, of Soviet design, were used. The DShK 12.7-mm machine gun was a very common. It was portable, and had an effective altitude range of 5000 ft (1500 m.) Another weapon was the ZPU series 14.5-mm machine guns. These towed units could be grouped in single, double, or quad mounts. (ZPU-1, ZPU-2, or ZPU-4) The ZU-23-2 was a 23-mm towed machine gun, with dual mounts.

The most widely used larger gun was the Type 55 37-mm machine cannon. It predominated in the air defense regiments. Its effective altitude range was up to 10000 ft (3000 m)

Both forward air controllers and strike aircraft were vulnerable to these weapons, the latter particularly during recovery from ordnance delivery dives.

The gun crews were tireless and proficient in protecting their positions by frequent movement, digging, and camouflage, so that positions were rarely seen unless the weapons fired.

Guns of 23 and 37 mm were captured in the A Shau Valley during the summer of 1968. Since that time, aircrews continued to report firings from such weapons near the Laotian and Cambodian borders. These guns had sustained rates of fire of 200 rounds and 80 rounds per minute, respectively, and effective slant ranges to 8200 ft. (2500 m)

Larger guns such as the S-60 57-mm and KS-19 100-mm machine cannons also saw trail service. A few of the largest guns, the 85-and 100-mm, were deployed in Laos during the period. The Chinese used these guns to protect roads they were building in northwestern Laos, but of more significance to US aircrews, the North Vietnamese positioned 85 and l00-mm guns along their side of the Laotian Border, close enough that cross-border firings threatened USAF aircraft over Laos. Occasionally, such guns were moved across the border. The 85-mm gun had a maximum effective slant range of 27500 ft. (8400 m) the 100-mm, 39,000 ft. (11900 m). Both had rates of fire of 15 rounds per minute. They had been controlled by radar in North Vietnam but, no positive evidence of radar control in Laos is known. 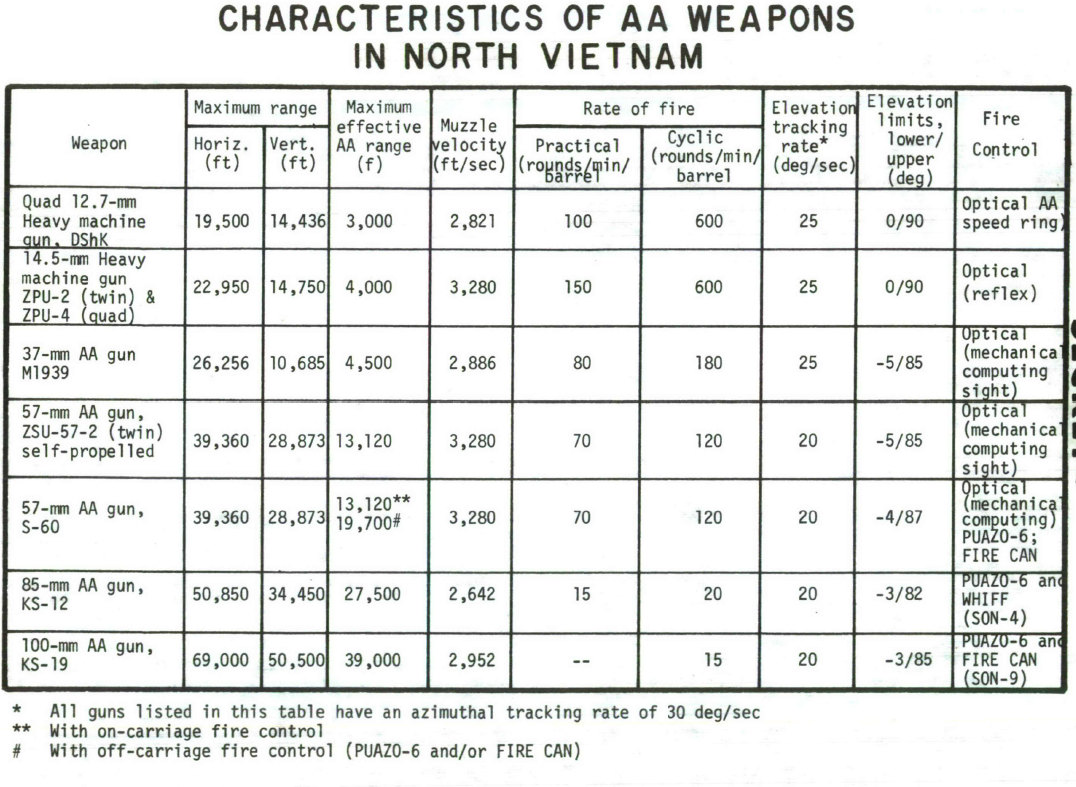 While the numbers of larger caliber guns increased, mobile defense for truck convoys was added by introduction of Soviet armored vehicles carrying two automatic weapons, and by mounting AA machine guns on trucks.

There were always four to five times as many prepared positions as there were guns, with the weapons being shifted rapidly from one site to another. Gun sites were usually lightly revetted; however, later in Laos, more heavily constructed revetments were like prepared positions, so that the defense structure along principal roads took on permanence. Sites were camouflaged adroitly, using vines and trees trained to trellises and netting made from or covered with local vegetation. Frequently sites were so well hidden that, even when found, photo intelligence could not determine the exact caliber and number of guns.

As gun crews gained experience, they displayed more subtle tactics. Not all the guns in an area would fire at every pass made by aircraft, so that pinpointing the sites for subsequent attack was further complicated. Decoys were built, sometimes made into flak traps by addition of real guns near enough to fire on strikes that took the bait. While the 23-mm and heavier guns were located on the routes, and near the point targets to be protected, machine guns were located randomly, particularly on ridgelines some distance from the roads.

Gunners frequently allowed one or two passes to be made without opposition, hoping to lull the aircrews into complacency, while studying flight patterns and altitudes, then opening up in barrage fire. The gun crews knew how to use bases of clouds to estimate heights, and how to evaluate terrain  to determine the most likely approach routes. 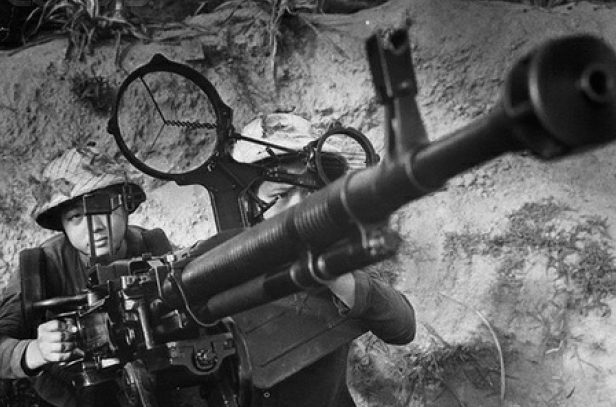 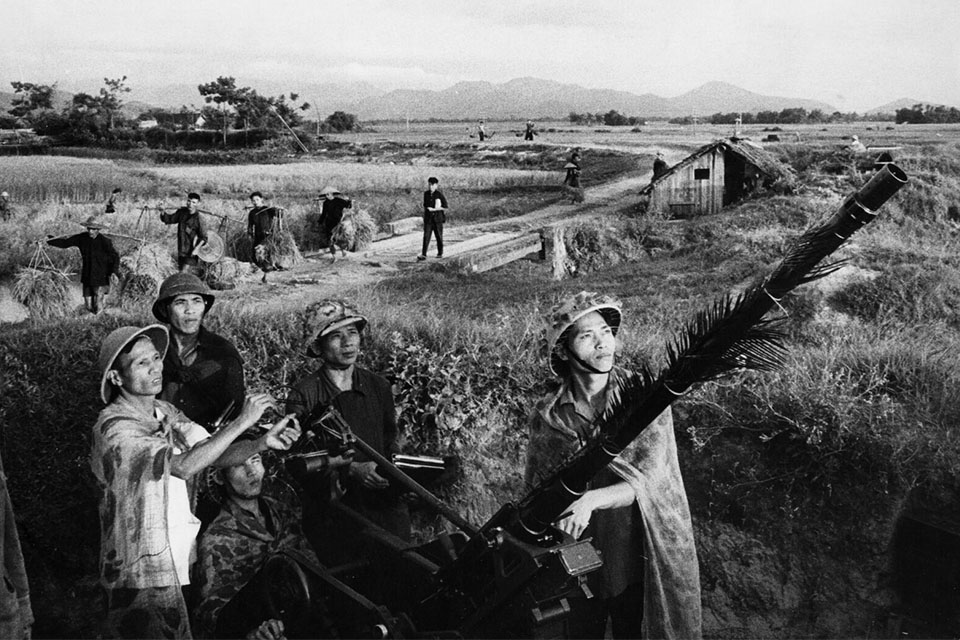 The SA-2 Guideline (S-75 Dvina in Russian designation,) was the epic surface-to-air-missile (SAM) system with a rich history. It is also one of oldest SAM, still used in some countries, since 1957. Middle range SA-2 missile systems entered in service in USSR in 1957 as a replacement for antiaircraft guns. In May 1960, Gary Powers’ U-2 spy aircraft was shot down near Sverdlovsk. Two years later, during the Cuban Missile Crisis, another U-2 was shot down. This demonstrated SA-2 effectiveness, but the Vietnam War is where the SA-2 got its legendary status.

By the end of 1966, 1017 firings had destroyed 39 US aircraft. Missiles from any one of the 152 SAM capable sites served to force US aircraft down into the conventional fire envelope, but also caused aircrews to jettison ordnance, and decreased their bombing accuracy due to evasion.

The RTB consist of a Fan Song radar, command van, apparatus van, and diesel generators. This battery provides all technical control for the radars.

The OBO consists of early warning radars, which secure the site with targets, conduct reconnaissance, and recognize threats at long distances from the site.

The SB consists of six launchers and six transporter-loaders, towed by semi-trucks. 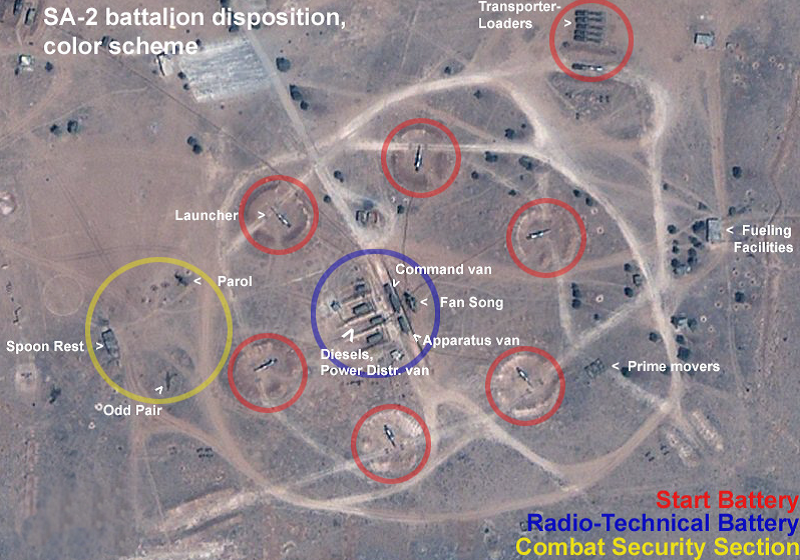 The first indication of their Vietnam deployment was sporadic interception of radar signals associated with SAMs, emanating from the panhandle of North Vietnam. In December 1969, two SAMs were fired at a formation of three B-52s near Ban LaBoy. And in January 1970, photo reconnaissance and electronic intelligence located three active sites in the southern tip of the panhandle, providing coverage into Laos about 9 km at Ban Karai and 18 km at Mu Gia Pass. Later in the month, a site appeared just north of Ban Karai, giving 28 km coverage into Laos.

Two more unusual weapons of marginal utility were employed by the NVA air defense in southern Laos. Starting in 1969, unguided rockets were fired at USAF gunships. The frequency of firings increased dramatically in early 1970, and the rockets were more often associated with AA fire. The rockets, probably 122 and 140 mm, did not have proximity fuses, and missed by long distances. No US aircraft were lost. 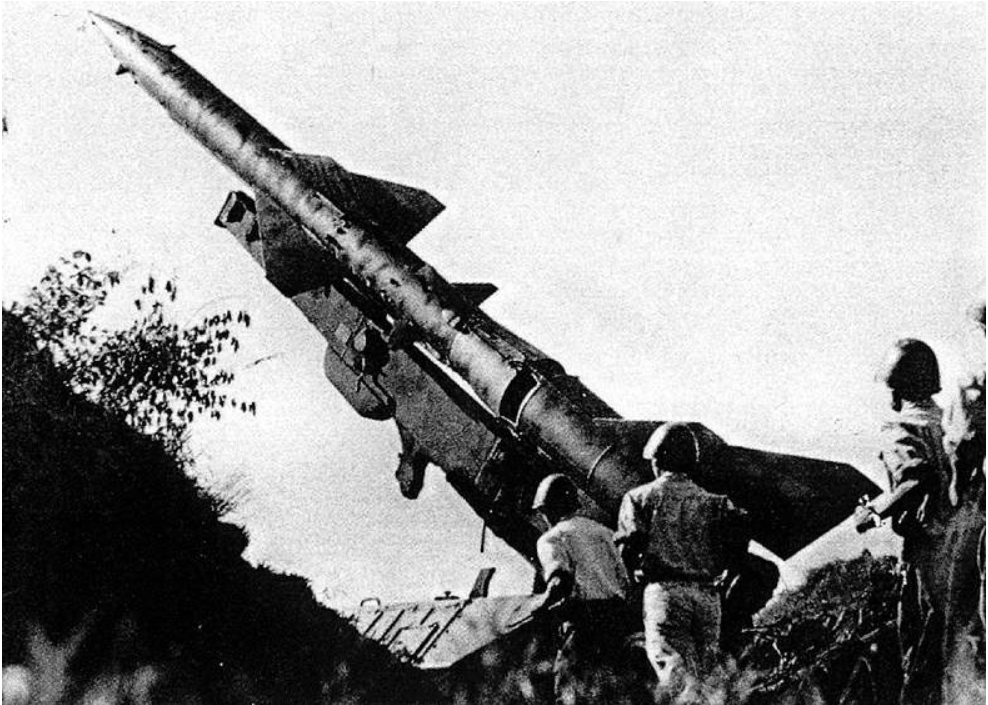 The NVA had a massive air defense system, which created a major challenge for US aircraft attempting to interdict the Ho Chi Minh trail. 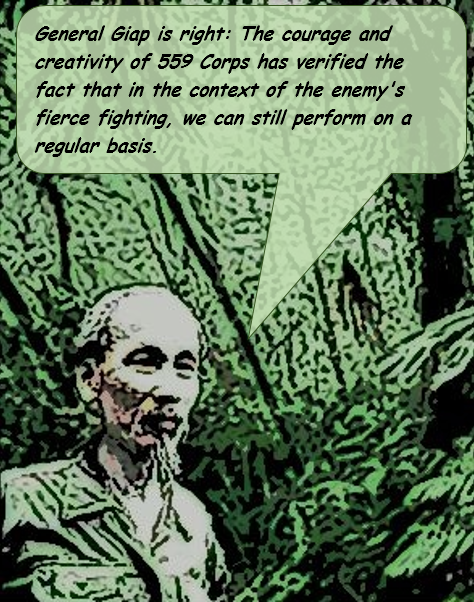