Have you ever noticed the strange PAVN unit names like d4/e272?

Well, it turns out that this refers to the 4th Battalion, 272th Regiment. This shorthand notation was apparently widely used by the North Vietnamese Army.

Our dear friend Stephane Moutin-Luyat explained to me that he learned about it from a Vietnamese friend, who specialized in Vietnam War history. This “concise” notation was used during both Vietnam wars. The modern Vietnamese Army uses this in an official manner, even for payroll purposes.

Decoding is rather easy by knowing that the following letters refer to unit sizes:

If a lower unit is to be identified, the listing is from lower to higher units, left to right.

Variants of this notation include capital letters instead of lower case. And, sometimes the slashes are eliminated, and only spaces separate them. So C11 D3 E9 F304 would be a variation in the notation.

The concise unit notation is something that can be used quite effectively for Campaign Series Order of Battle (.OOB) files, although it is more abstract than conventional naming.

Another way that this information is useful is in researching PAVN units or battle histories, particularly on Vietnamese websites. If you are aware of this notation, then you will recognize references to units more quickly, and know to look for them.

Well, I wonder what Uncle Ho thought of this notation… 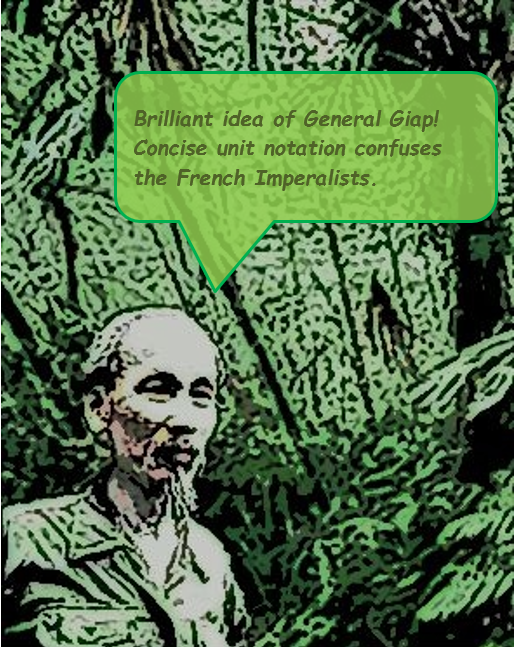 In next episode of Uncle Ho’s Hideout, I’ll explain how you can more quickly obtain topographical maps in Indochina. Until then!