Without the “Truong Son,” victory for the North Vietnamese would have been inconceivable. Of course, the Americans called it the “Ho Chi Minh Trail.” But, did they truly understand its importance? This series of articles hopes to reveal the monumental North Vietnamese effort to build, operate, and defend the Truong Son. American air counter-measures to interdict and hamper infiltration were  also on a colossal  scale. However, these failed to halt the flow of NVA troops, supplies, and equipment invading South Vietnam. In this series, you will find out why.

Since the Viet Minh 1954 victory, and subsequent division of Vietnam by the Geneva agreement, Ho Chi Minh still wanted to reunify North and South Vietnam. But, to overthrow South Vietnam, he realized that they needed a robust supply route. The Demilitarized Zone, (DMZ,) blocked north-south roads. South Vietnamese and American navies hampered efforts move supplies by sea. So, in 1959, Communist Party leaders planned a massive  program to build and operate a road through Laos.

The epic undertaking would require over 100000 people to accomplish. Ultimately, 20000 km of roads and trails would be created. The trail network began at the North Vietnamese-Laotian border at Nape and Mu Gia passes. It extended along the west side of the Annamite range through Tchepone down to Saravan in southern Laos, and into Cambodia. And, in Cambodia, the Sihanouk trail continued down to the South Vietnamese border at Cochinchina, the region surrounding Saigon.

Trails ran through incredibly difficult terrain, numerous streams and rivers, thick jungles, and with major seasonal rains. But, the jungle canopy provided concealment. Initially, supplies were carried by porters, bicycles, and pack animals. Gradually, engineers built roads, 8 meters wide, for trucks, which in last years of the war, carried most of the supplies. In addition to roads, several pipelines were built to carry petroleum fuel and lubricants.

Thousands of workers were used to clear jungle, and carve roads along mountain sides. When American airstrikes cratered roads, they immediately worked to fill in the holes and smooth the surfaces. They also provided camouflage where needed.

Truck convoys ran at night between way stations spaced about 30 km apart. Drivers and trucks went back and forth only between two way stations, so they knew a particular trail segment very well. Convoys had about 100 trucks. At each way station, the supplies were unloaded and transferred to trucks in the next leg down the line. 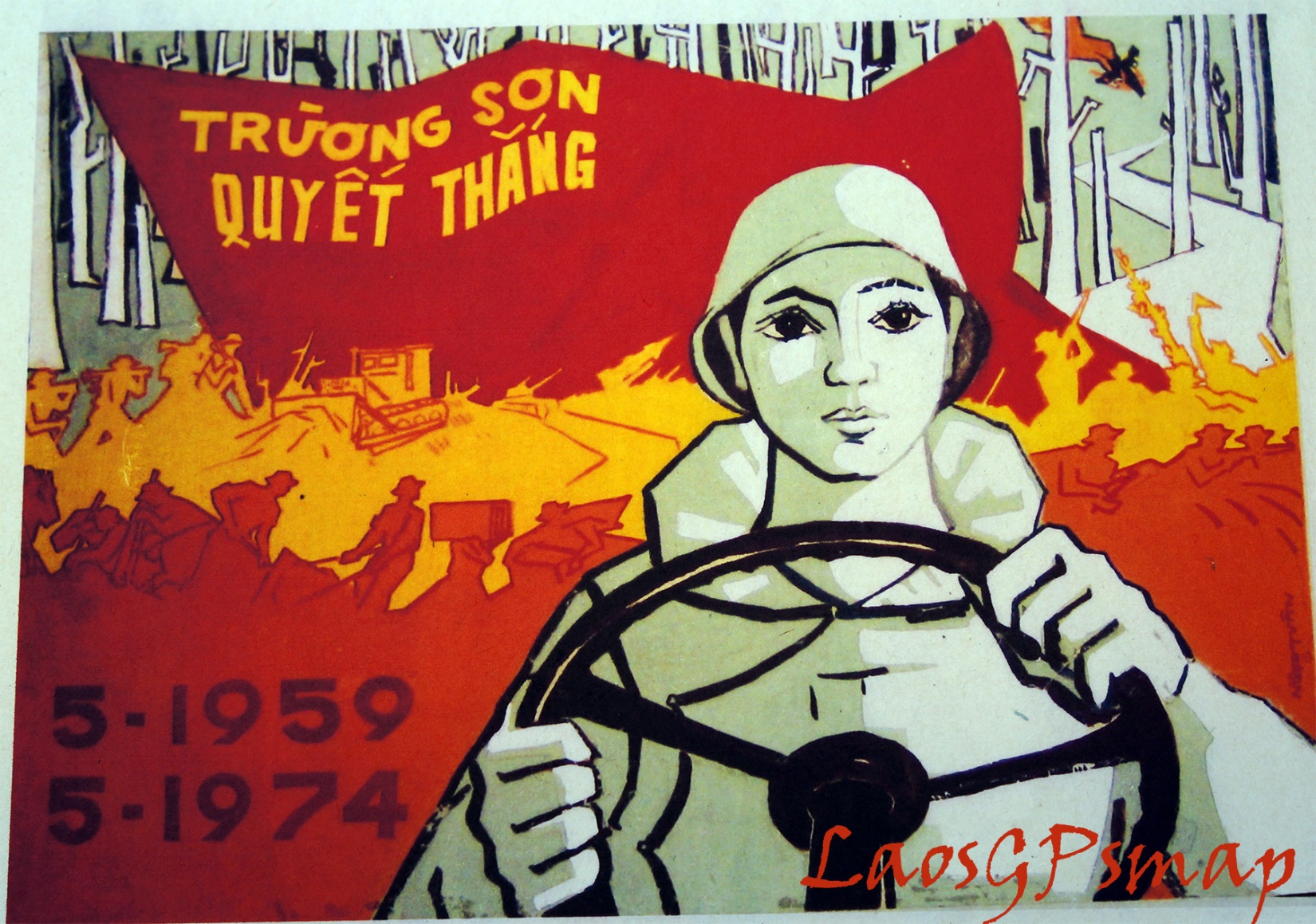 US Interdiction Against Trail

Ambassador to Laos, William Sullivan represented US policy on the Ho Chi Minh trail. Direct confrontation  of US forces in Laos with NVA was to be avoided. However, trail bombing and other covert interdiction methods were employed on a large scale.

Serious aerial reconnaissance began in 1964 with “Operation Yankee Team.” In northern areas, the US Navy RF-8A aircraft patrolled, while in the Laotian panhandle, US Air Force (USAF,) RF-101s made trail surveys. These were escorted with Navy F-8 fighters and Laotian T-28 fighter-bombers to retaliate if the recon planes were shot at. Photography provided location data for bombing campaigns. 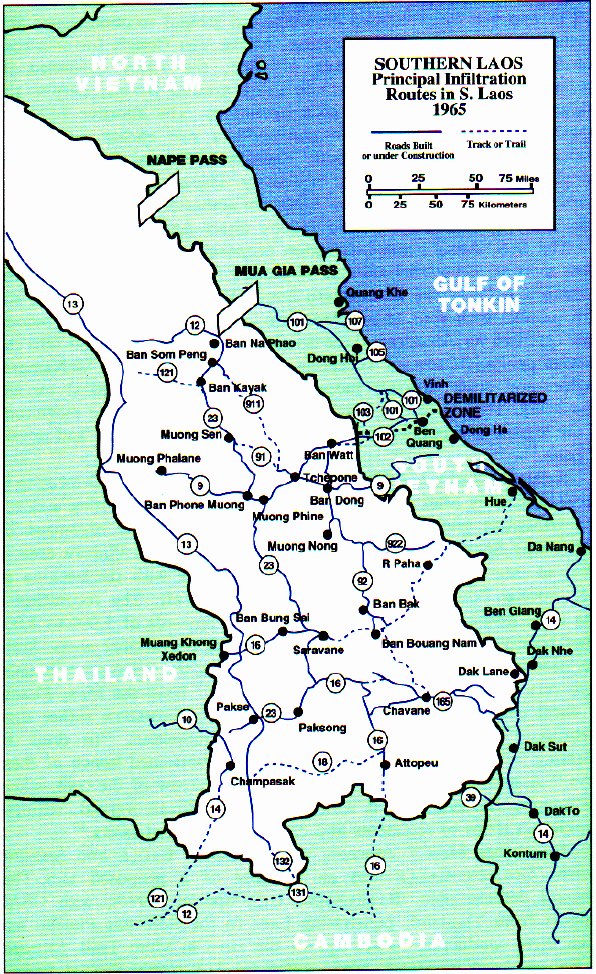 Operation Steel Tiger was a covert bombing campaign on the Ho Chi Minh trail. This began in 1964 and continued until 1968, when it was merged with Operation Tiger Hound and renamed Commando Hunt. The Tiger Hound area was much smaller and adjacent to the South Vietnamese border in the most southern part of Laos. These campaigns used B-52F Stratofortresses deployed in Andersen Air Force Base in Guam and U-Tapao in Thailand. Their involvement was code-named “Arc Light.” F-105 jets protected the B-52s against SAMs, and F-4s provided protection from flak and the potential threat of MIGs. Other trail strike aircraft included B-57s, F-4s, and A-7s.

Fixed wing gunships including the AC-47 (SPOOKY,) AC-119 (STINGER,) and AC-130 (SPECTRE) were used against ground targets. These were more effective, but were involved in a small fraction of total sorties. These missions were aided by Laotian roadwatch teams. 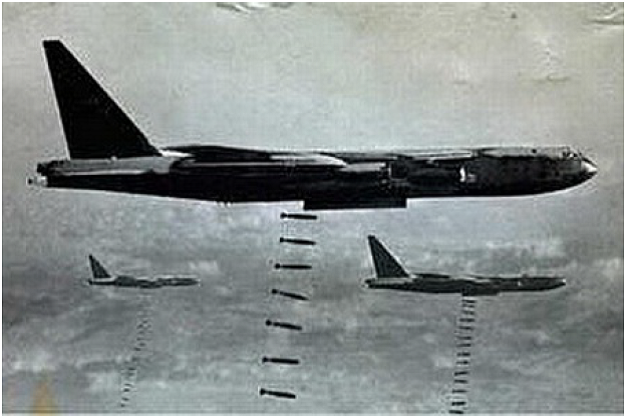 General Westmoreland was not satisfied with the effectiveness of Yankee Team, with concerns over anti-aircraft guns, and monsoon weather. He ordered ground surveillance. Local Laotians or Vietnamese, supplied with logistic support, would be used in Operation Leaping Lena. This involved parachuting radio-equipped teams into landing areas by unmarked VNAF-piloted aircraft.

Leaping Lena was unsuccessful because of North Vietnamese security patrols found and killed the incompetent teams. So, in 1965, a new plan, Operation Shining Brass called for US Special Forces, with USAF support to survey the trail. This program was much better.

Larger ground actions occurred in the early 1970s in the areas of Tchepone and Saravan. Operation Lam son 719 was a Republic of Vietnam Army (ARVN,) mission to disrupt a potential NVA offensive, and destroy trail infrastructure and supplies. The ARVN armor/infantry task force consisted of the 1st and 3rd Armored Brigades, 1st and 2nd Infantry Divisions, plus the Airborne Division and 1st Ranger Group.  Advancing west along Route 9, this effort failed when faced by NVA counterattacks of the 304th, 308th, 320th and 2nd Divisions. ARVN helicopter assaults faltered due to unexpected numbers of anti-aircraft guns. (NVA 367th Air Defense Division) Poor condition of Route 9 slowed advance, and hampered resupply. ARVN artillery range was inferior to the NVA’s 122mm and 130mm guns.

Saravan was a major city and crossroads within the trail network. Until 1970 however, the NVA was content to bypass it, and did not challenge the Royal Laotian Battalion (BV 41,) and its three attached armored-car platoons garrisoned there. But in late 1970, two NVA battalions attacked and captured the city. It became a  Truong Son headquarters for Base Area 612. But in 1971, Laos retook it during Operation Sayasila. Later that year, at the beginning of the dry season, the NVA recaptured it. The 10th Rifle Battalion, of the 39th Regiment, 968th Division occupied it. Again in the fall of 1972, Laotian Military Region IV retook Saravan in Operation Black Lion using GMs 41 and 42.

Extensive anti-aircraft units were deployed along the trail. Doan 559 had six air defense regiments. The 367th Air Defense Division also protected the trail. Most of the weapons were employed at storage sites and base area complexes. One historical Vietnamese reference claims that 2455 aircraft were shot down along the Ho Chi Minh trail.

The most widely used larger gun was the Type 55 37-mm machine cannon. It predominated in the air defense regiments. Its effective altitude range was up to 10000 ft (3000 m)

I imagine that Uncle Ho was quite proud of Vietnamese efforts to create and maintain the Truong Son. 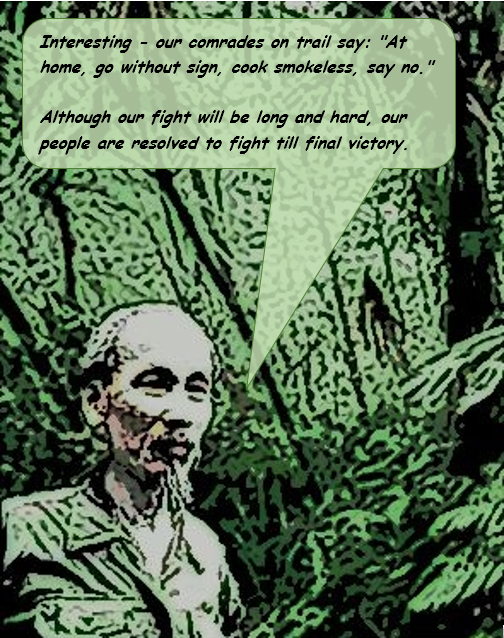