Can you guess what year the phrase “Ho Chi Minh Liaison Road” was coined? It was in 1947, during the First Indochina War. The trail had origins long before the Americans got involved, and became agonized by it.

During WWII and the First Indochina War, the Vietminh needed and developed a “backwoods” trail system and logistic network. Although primitive, it helped connect the northern and southern parts of Vietnam. Three-month journeys over the land routes were not uncommon. After the French defeat in 1954, and the division of Vietnam at the 17th parallel, the trail became the main route for North Vietnamese (DRV) agents, (including Le Duan,) and communist-indoctrinated South Vietnamese “returnees” en route to South Vietnam.

To infiltrate men and supplies to South Vietnam, the DRV relied on the eastern sector of Laos contiguous to southern North Vietnam and northern South Vietnam. That is where the latticework of roads, trails, tracks, and waterways along the western slope of the Annamite Mountain chain. There were numerous valleys between rugged mountain passes with elevations of 1400 to 1700 meters. Roads generally followed valleys, and were often parallel to rivers, which served as alternate routes.

Although the trail was mostly in Laos, the communists called it the “Truong Son Strategic Supply Route” (Douong Truong Son,) after the Vietnamese name for the Annamite Mountain Range. This and the name “Ho Chi Minh Trail” were kept secret for a long as possible.

The trail areas in Laos consisted of jungle-covered mountains, some rising to about 2745 m in the north and 1525 m in the south. Tropical rain forests of mixed evergreens and deciduous trees are abundant. Other trees were second growth bamboo, wild banana, and scrub, and much of the ground is covered with tall tough grass called “tranh.”

Most of the rain falls between May and October. Overland travel is difficult and treacherous during this time. The dry season is the time when trails are firmer, and large scale movement is militarily feasible.

Until 1964, vehicles were confined to relatively poor roads, such as Routes 12 and 8 through the Mu Gia and Nape Passes respectively. Routes 23 and 9 led to Tchepone, or southern Laos via Route 23. 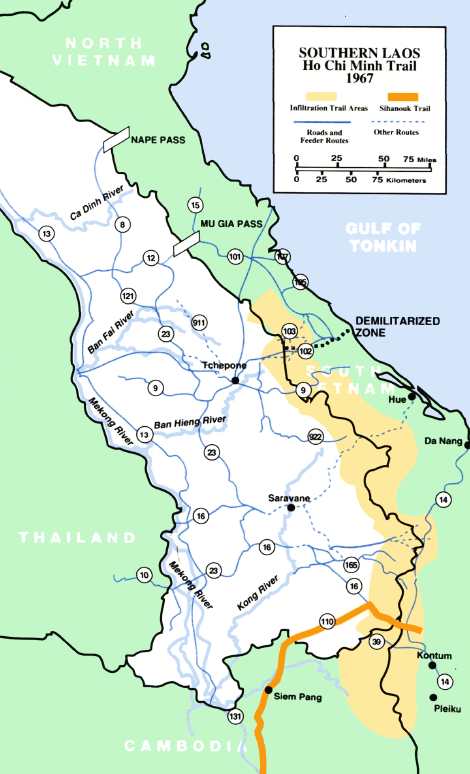 In May 1959, the Communist Party Central Committee’s 15th Congress agreed on a resolution to develop and expand the trail. President Ho Chi Minh officially assigned the task of “Special Military Missions” to open the Truong Son Road, providing supplies and support for the battlefield in South Vietnam. From this, an organization called Doan (Group) 559 was formed. The number comes from the month, May = 5, plus the year = 59 to get the identifying number.

Colonel Vo Bam began organizing Doan 559, with an initial staff of 500 cadres and soldiers. They decided to develop roads on the west side of the Annamite Range to have better protection from South Vietnamese attacks.  In early June 1959, Group 559 organized survey teams to open the route to the south starting from Khe Ho. (7 km north of DMZ) Construction began, and by December 1961, gravel roads 5.5 m wide reached Route 9 at Muong Phin, Savannakhet Province. That year, Group 559 transported 5177 tons of weapons and equipment, and hauled 91 tons of rice. 7664 officers and soldiers moved through routes to battlefields, and 616 people from south to north. This was all done with maximum secrecy.

The terrain also necessitated a vast amount of bridging to span the numerous rivers, streams, and valleys. Enough roads were built by 1965, that heavy equipment and supplies were moved mostly by truck. Eventually, the engineering effort would make many of the routes all-weather, thus diminishing the seasonal nature of infiltration.

Doan 559 developed into a significant organization, similar to a military corps. Ultimately, it had general staff, political, transportation, and construction bureaus. There were 25 Binh Tram regiments, involved with operating the truck network. Doan 559 had 23 other military regiments under its direct control, including six engineer, six air defense, and others including two truck regiments, and two fuel supply regiments. There were three automotive repair workshops, and four field hospitals. The Binh Tram regiments also were supported by an infantry regiment, air defense battalion, separate engineer battalion, reconnaissance company, and a battalion of couriers. 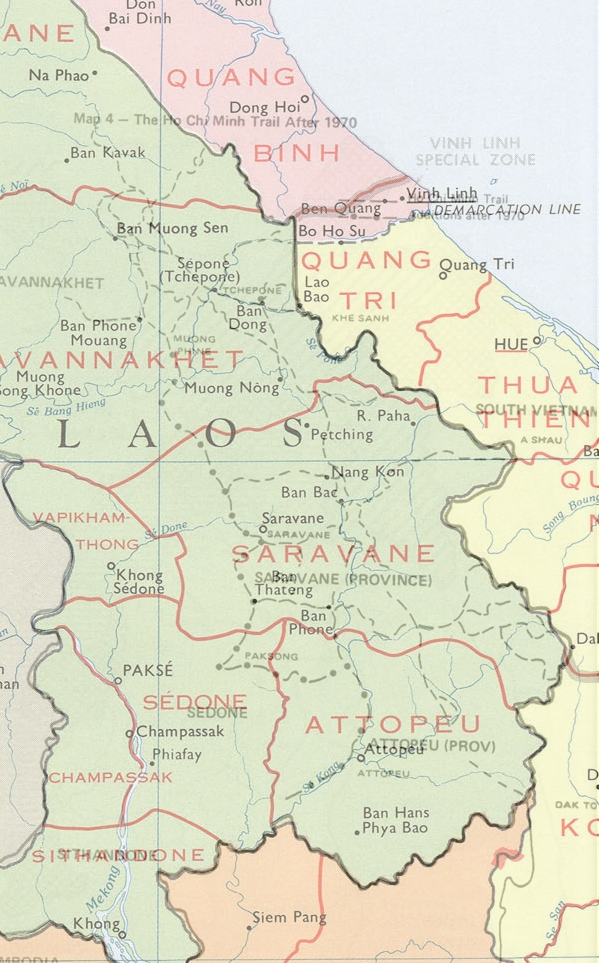 The network (for both vehicle and foot traffic) consisted of trails connected by a series of small rest-points, larger storage sites, and a few major base areas permanently manned. The network needed not only soldiers to operate the routes, but also personnel to feed and support the workers. The area around Tchepone was such a hub, and was listed as base area complex 604, one of the major locations for movement, storage, and other support activities.

One complex, typical of several others, was discovered by an American air cavalry unit, and dubbed the ‘City’. It had 182 storage bunkers each of 36 cubic meter capacity, 18 mess halls, a training area, and a small animal farm. It covered approximately three square kilometers, and the storage depot was capable of rapid receipt and issue of large quantities of supplies. From captured documents it was apparent that the ‘City’ had been in operation for at least two and a half years. The haul of weapons it yielded was enough to equip an NVA regiment.

The following key base areas were established:

There were five large Base Areas (BAs) in the panhandle of Laos (see map).

BA 604 was the main logistical center during the Vietnam War. From there, the coordination and distribution of men and supplies into South Vietnam and BAs further south was accomplished.

BA 611 facilitated transport from BA 604 to BA 609 and the supply convoys moving in either direction. It also fed fuel and ammunition to BA 607 and on into South Vietnam’s A Shau Valley.

BA 612 was used for support of the B-3 Front in the Central Highlands of South Vietnam.

BA 614, between Savannakhet, Laos and Kham Duc, South Vietnam was used primarily for transporting men and materiel into MR 2 and to the B-3 Front.

BA 609 was important due to a fine road network that made it possible to transport supplies during the rainy season.

The base areas housed numerous supply bunkers, storage areas, barracks, hospitals, and command and control facilities. These were concealed from aerial observation by an intricate system of natural and man-made camouflage that was constantly expanded and replaced. By 1973, trucks could drive the entire length of the trail without emerging from the canopy except to ford streams or cross them on crude bridges built beneath the water’s surface. 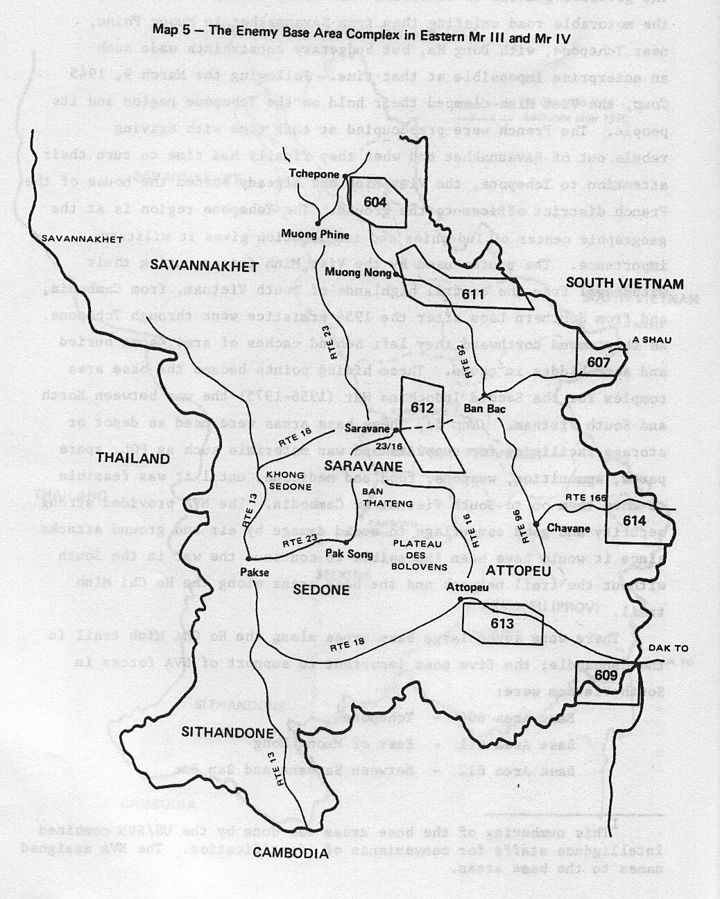 Base Areas on Truong Son

The trail network had primitive origins, but through the determined efforts of Doan 559, it became an effective supply network from which the war in South Vietnam could be executed.

I imagine Ho Chi Minh had much input on the trail management, because it was so very important strategically. 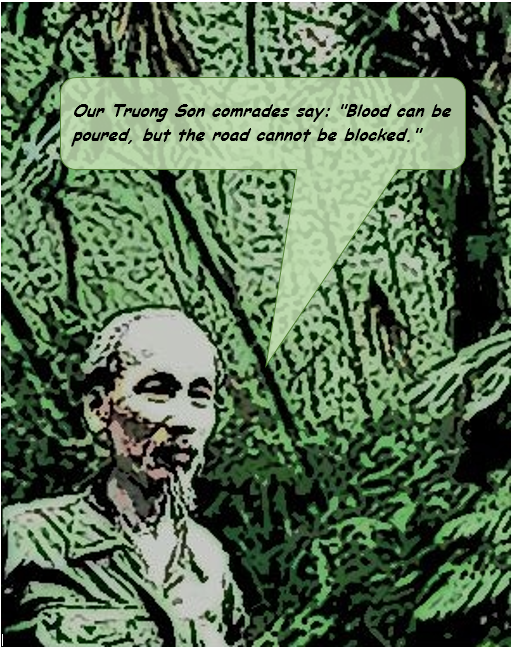